Accessibility links
Boston's LGBTQ+ Musicians Are Paving The Way Toward Inclusivity Billy Dean Thomas, Optic Bloom and Anjimile are among the various acts paving the way for inclusivity in Boston.

City Scenes: How Boston's LGBTQ+ Musicians Are Making Space For Each Other

City Scenes: How Boston's LGBTQ+ Musicians Are Making Space For Each Other 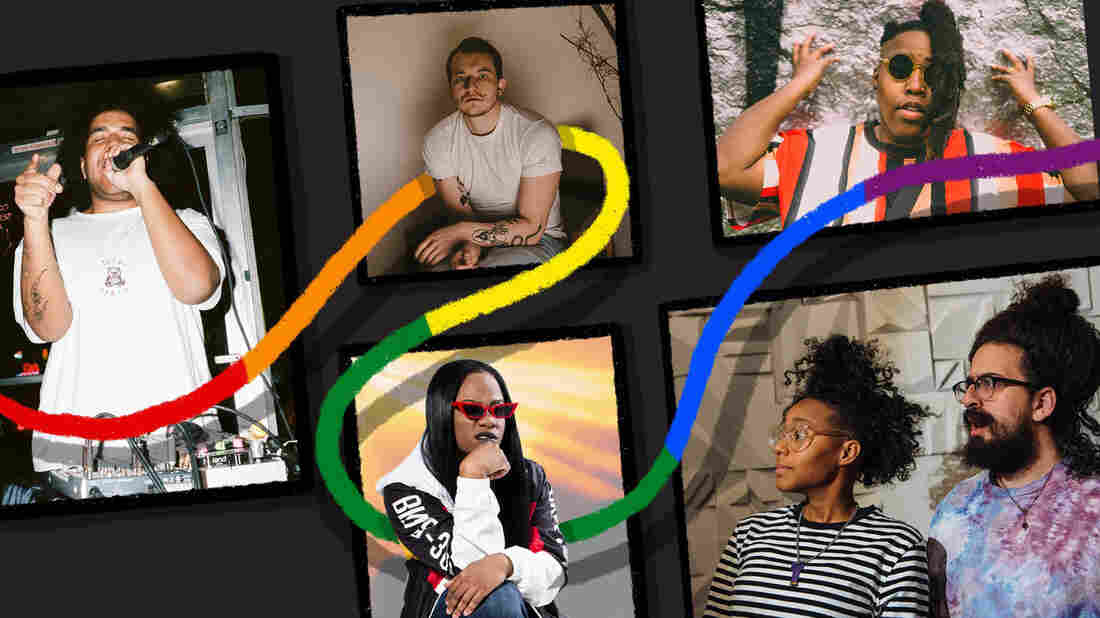 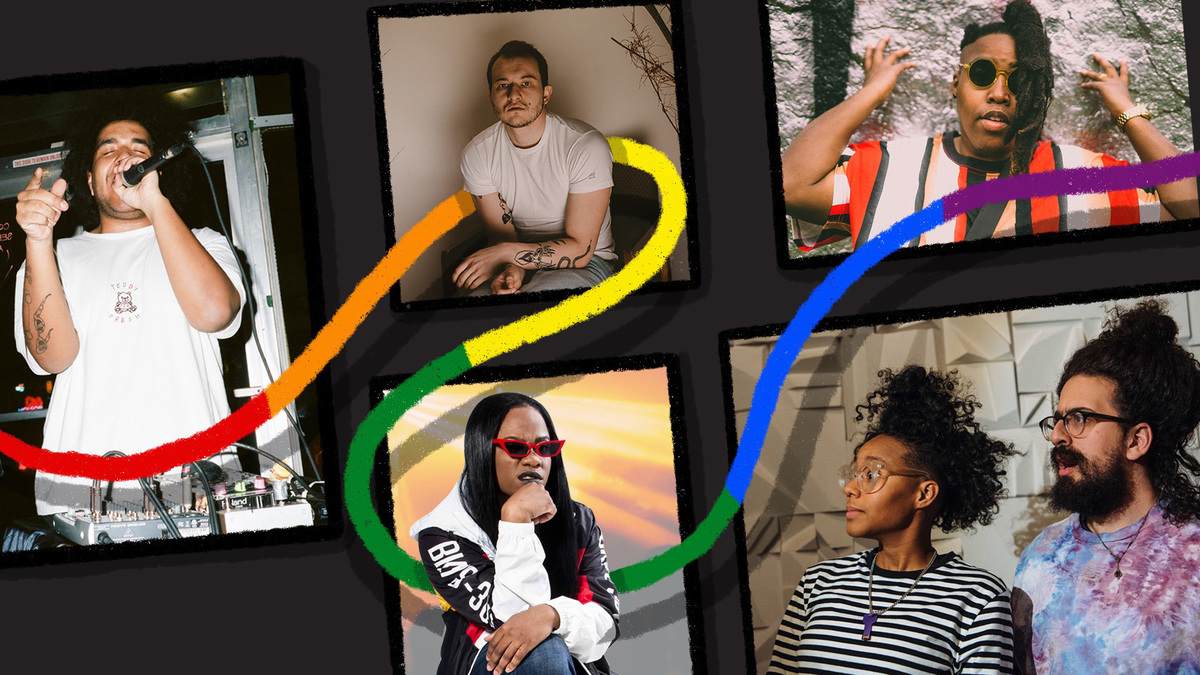 The artists of Boston's queer scene.

Boston's music scene has produced its share of rock legends. For decades, the stages within its gritty clubs have given rise to big acts like Aerosmith, The Cars, Pixies and more. With time comes change: Towering, overpriced condos are pushing out the city's beloved venues, leaving its emerging talent fewer opportunities to perform. But for artists who never fit the mold of what's expected on those stages (read: white, straight, cis rock), this downsizing phenomenon is an all-too-familiar challenge.

"I have often heard that my music is too threatening, a.k.a. too Black or too political, so people are less likely to book me or support me publicly," says rapper and local style icon Billy Dean Thomas. "In general, being the new artist on the block wherever you go is challenging."

"But add being Black, nonbinary and a hip-hop artist, and you have the perfect stew of transphobia, sonic racism and a lack of respect or buy-in from cis straight men or cis women, who control a lot of the access to networks and resources," Thomas says. They are amongst a number of LGBTQ+ artists who are pushing for more inclusive lineups and standards in venues in Boston. 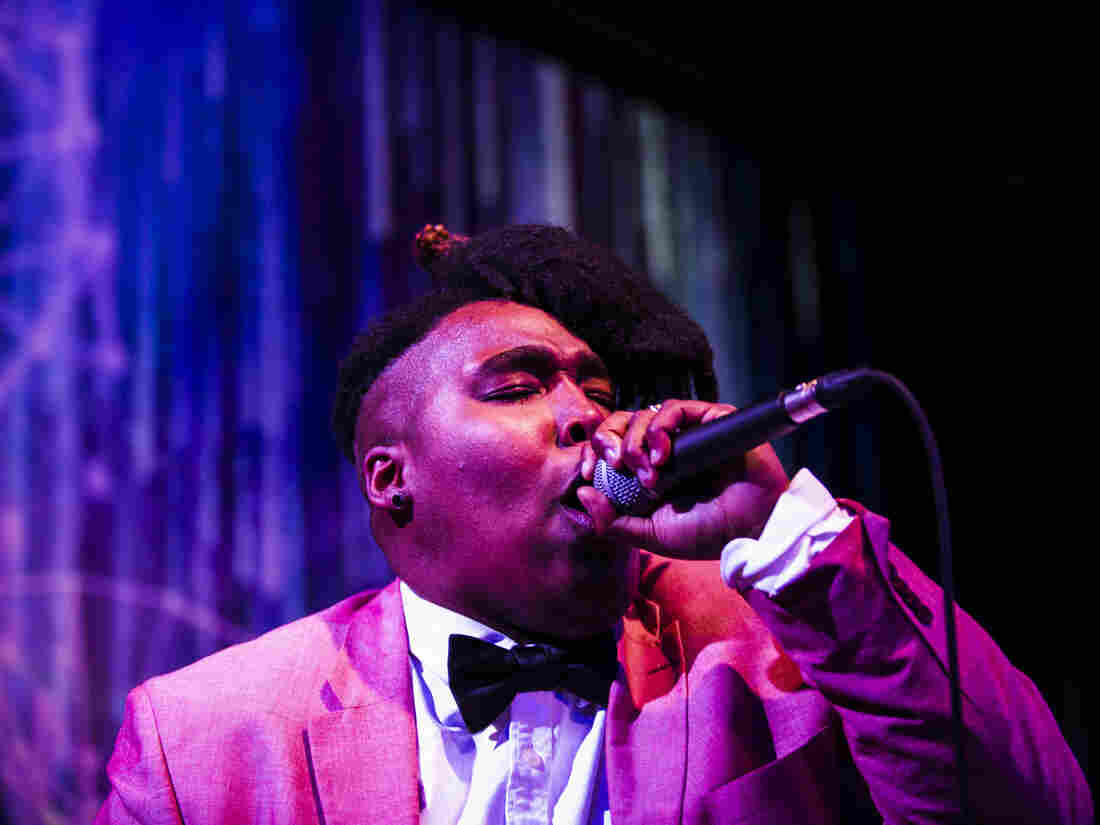 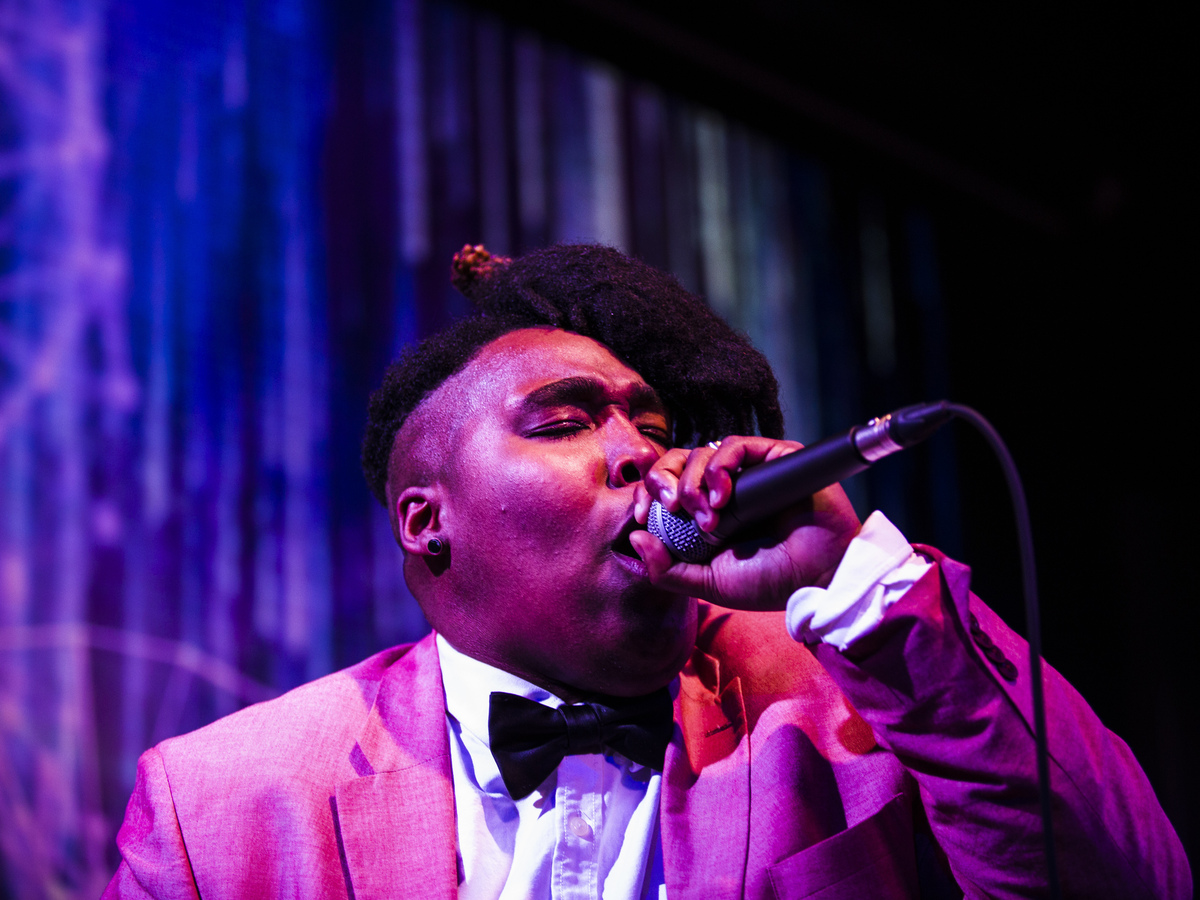 It's difficult to isolate the varied struggles of artists who hold intersecting marginalized identities. As singer-songwriter Home Despot reminds us: "Queerness is an intersectional identity, and, in Boston, being white is more of a privilege than being queer is a source of exclusion." That said, is a queer, gender non-conforming, Black, disabled rapper being left out because intentional gatekeeping restricts opportunities for hip-hop artists? Or is it that repeated microaggressions against Black folks make them feel unsafe? Or perhaps a venue's staff does not respect their pronouns, or a space is simply not accessible. Either way, these behaviors are ones the Boston music scene must stop normalizing.

While there are traditional venues in Boston that welcome LGBTQ+ artists and fans (ONCE Somerville, Oberon Theater, and the shuttered Milky Way are frequently cited), often it's up to the artists — and their communities — to create the supportive and inclusive spaces they need to perform at their best. Working alongside those artists are a number of local non-profit and arts organizations committed to building environments that are made for everyone.

Emma Leavitt, creative director at Brain Arts Organization's Dorchester Art Project explains how the arts space was made to be inclusive from the start. "One of the very first things we did upon moving into the space was paint over the bathroom doors which said 'Ladies' and 'Men,'" Leavitt said. "We paid a trans artist, Lilly Dickinson, to design and paint them." In their place, the artist created signs that simply read TOILETS, removing any expectations about the gender identities of those who use them.

"I can't stress enough how much power language yields," says Dephrase, a producer in the duo Optic Bloom and a co-owner of Ugly Duck Studios in Boston's Brighton neighborhood. "I have conversations with each of my engineers about the proper usage of pronouns," they explain. It might be easy to think of performance and recording spaces as passive components of the music scene, ready to be shaped by whomever fills them, but inclusivity demands a conscious mindset and deliberate effort for everyone involved. 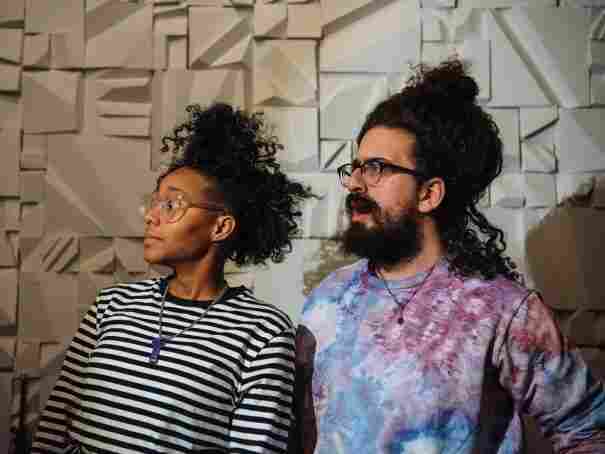 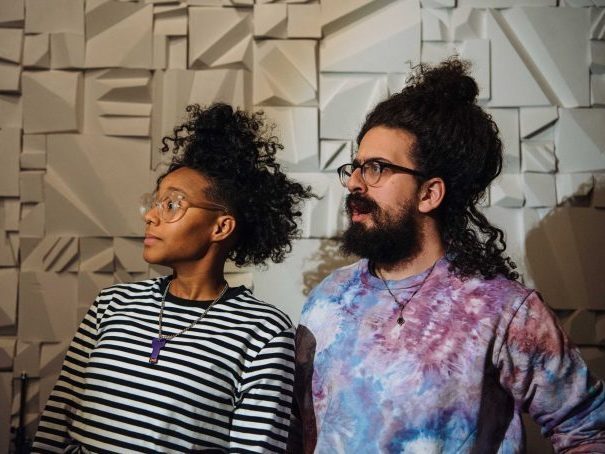 Flowerthief and Dephrase of the band Optic Bloom.

Flowerthief, lead singer of Optic Bloom, echoes those sentiments, and reminds us of why these details are essential. "People don't take pronouns seriously, but using people's correct pronouns actually decreases suicide rates for transgender non-conforming people by 65%," they say. Flowerthief is no stranger to the mental toll of this feeling of invisibility: "Going out and being consistently misgendered by people is just grating," they say. "It's invalidating."

Like the Dorchester Art Project, non-profit The Record Co. has been deliberate in its intentions to construct — quite literally — an inclusive space. Oompa, one of Boston's most successful rappers, who also happens to be queer, explains how she served on the organization's advisory board, which includes many Black, POC and queer members. "We advised on what would make these rooms feel the most safe," she said. "I'm talking about everything from the fabrics and colors they use, to what the by-laws of the place are, to what the spaces look like and who is at the front door." Though still under construction, the plans indicate The Record Co. will be a welcoming space made for everyone.

For some of the more historical venues like Cambridge's cozy folk stalwart Club Passim, it's the people that make the difference. "I've found safety in the community of young artists fostered by Club Passim," says trans folk singer-songwriter Izzy Heltai. "They have an unparalleled dedication to supporting a diverse group of young artists... that venue really feels like home." 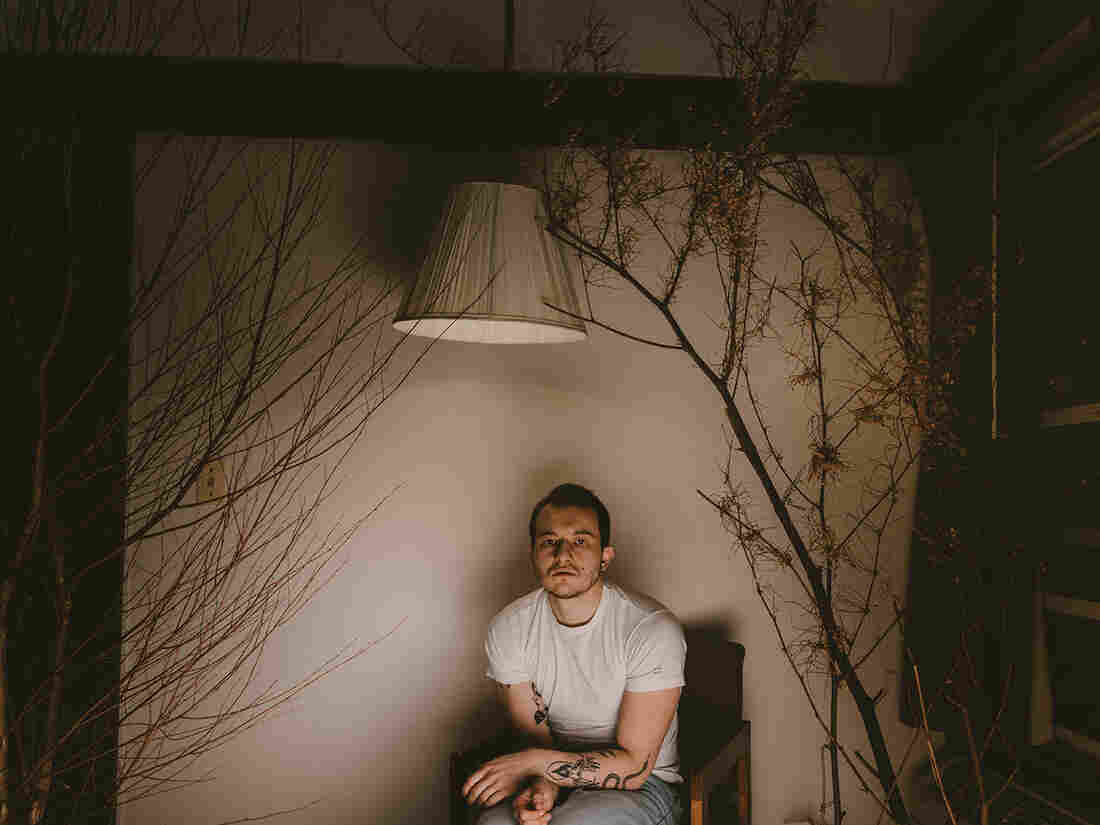 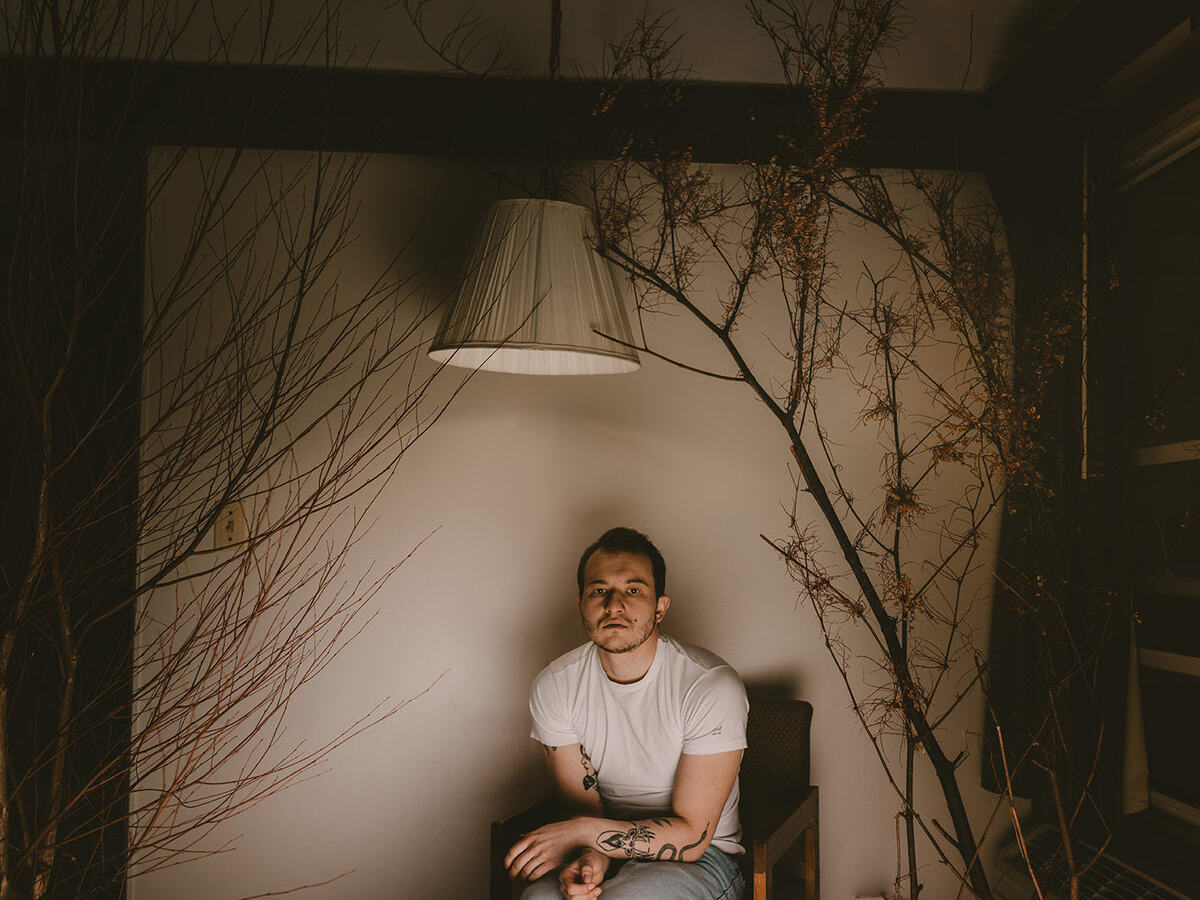 And for institutions that were once out of reach for BIPOC and queer artists, the artist collective HipStory — which includes the efforts of booking and outreach manager Muñeca Diaz and allies to the LGBTQ+ community like Boston hip-hop artist Cliff Notez — has made significant progress in getting underrepresented musicians up onstage. Their curated efforts include the "Night at The Museum" series at the Museum of Fine Arts and Boston Answering, which is a more affordable and local-focused alternative to the annual music festival Boston Calling. Although HipStory has worked to eliminate issues of tokenization of BIPOC and queer artists within their lineups, other organizations and institutions around town have not put in as much effort.

"I am definitely not passing as anything but gay as f*** and clearly Black," says Boston breakout Anjimile, who recently released a record on Father/Daughter Records. "So in a lot of cases, I feel like when folks book me for stuff in an attempt to have a more inclusive space, I end up feeling tokenized," they say. A lineup that contains an unvaried mix of identities fails to achieve diversity and, as Oompa puts it: "It's like you add a little pepper to an already cooked chicken — it doesn't make it taste any different." 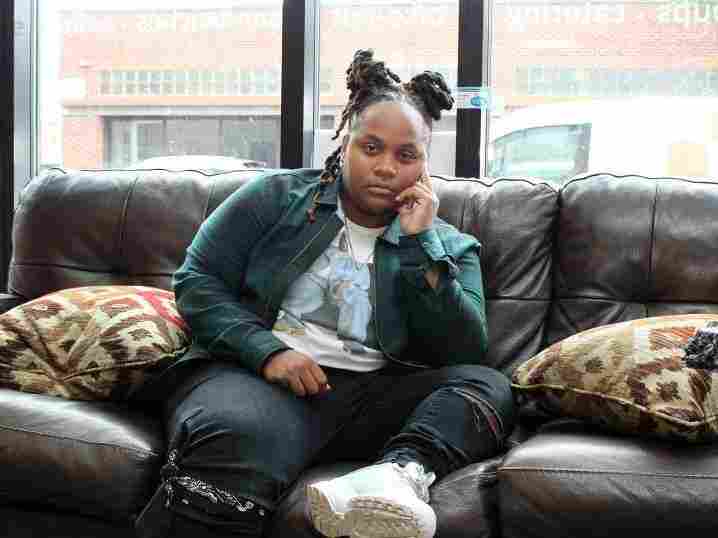 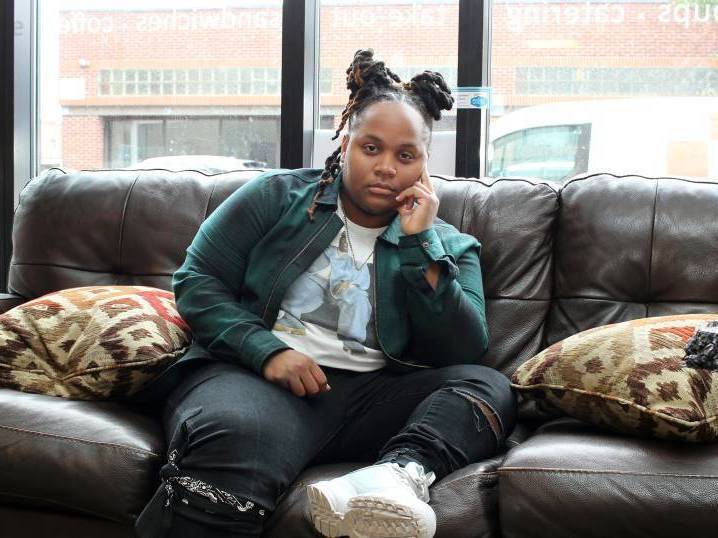 Something that can change the flavor, though, is increased visibility and representation for LGBTQ+ artists in Boston's music scene. Anjimile explains how this also encourages them to be more invested in their local music community. "It means so much to me to have folks like Brandie Blaze, Red Shaydez, Oompa and Billy Dean Thomas in the scene that I want to do whatever I can to participate and support these artists in whatever way possible," they say.

Local indie rocker Stace Brandt notes that watching queer artists across the scene has lit a fire in them to embrace their personal identity. What's more, they say, is that "finding other queer artists in Boston and becoming friends with them has been immensely helpful to my mental health and feeling part of a community here."

It also makes a noticeable difference for up-and-comers like Pink Navel, who shifted from playing DIY emo music to rapping. "I am privileged as my coming out journey all happened during my involvement in the music scene, and was supported by the people in it," they say. "I feel like we're working hard to remove challenges that queer artists face in the industry, DIY or not." 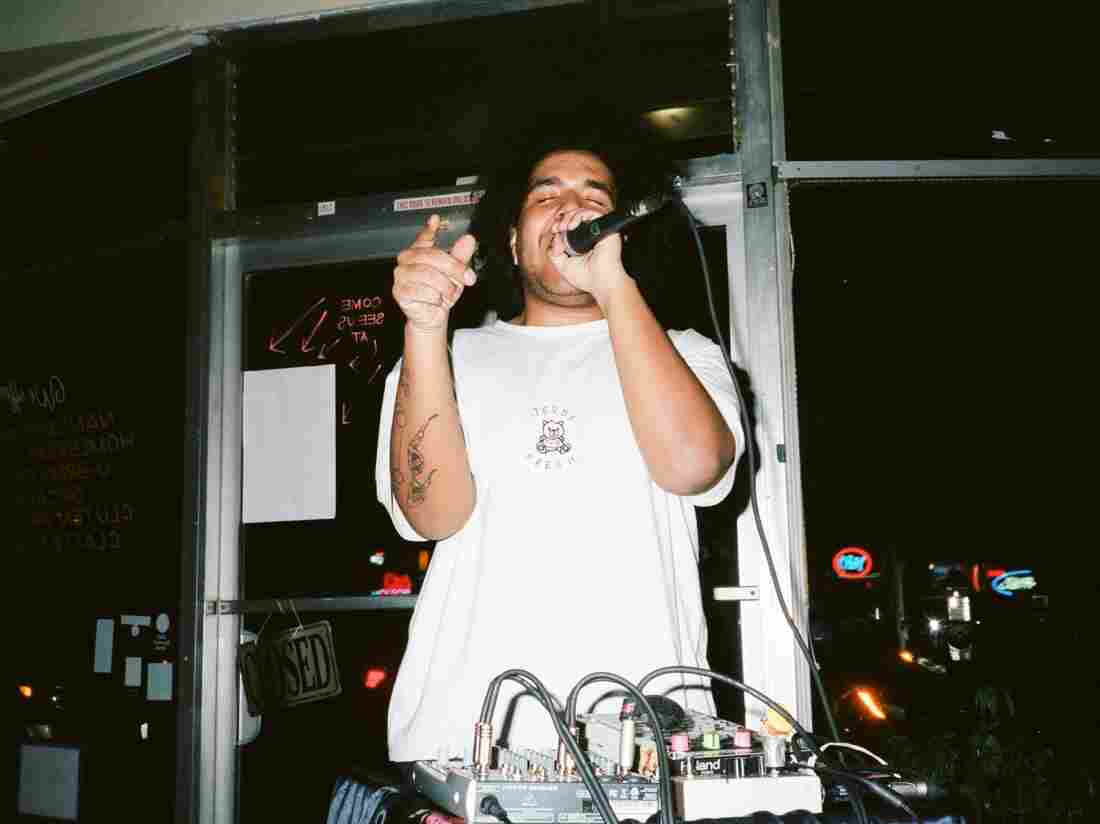 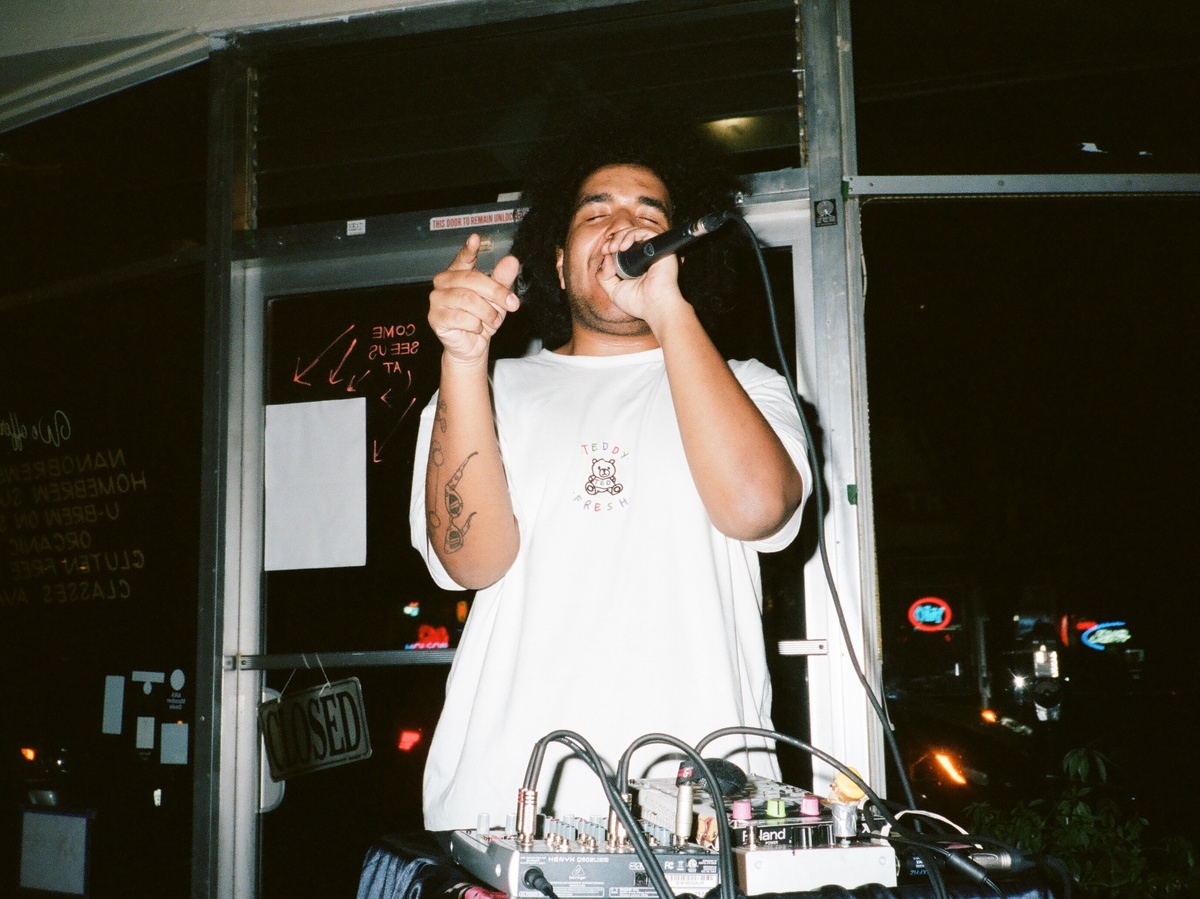 One of the challenges Boston's LGBTQ+ musicians are working to dismantle is the scarcity mentality, or as Oompa explains, "this idea of only having one slot for that 'type' of artist." It's an antiquated way of thinking that prevents the city's bookers from making more stage space for queer artists. Oompa believes that their community is setting the example for how to make that happen. "So many of us knew that we needed each other because it wasn't going to be easy to get other people to show up knowing we were openly queer, etc.," she says. "I think we became an example for how the rest of the music scene can operate. I'm excited to see the way people widen what's possible here so people don't have to leave [the city] as much."

Indeed, many of Boston's most talented acts are lost to other cities with stronger music infrastructures and more room for inclusivity, like Los Angeles, New York, Nashville and Austin. The constantly rising costs of living through the pandemic are further amplifying musicians' need to relocate. But the alternative infrastructure that the queer music community in Boston is building seems unique considering the competitive nature of the music industry. Individuals like Oompa are committed to raising the profiles of their queer BIPOC peers, and in some cases, stepping aside to give them space. And she's not alone. Ronnica, frontwoman of punk rock band Mint Green, shares Oompa's desire to elevate others: "I always try to make sure the voices of QTPOC (queer and trans people of color) are uplifted and represented as much as possible in the shows that I play because of my experience coming from an overwhelmingly white [DIY] scene."

Red Shaydez, a rising queer rapper from Boston who recently dropped her album Feel The Aura, says that folks like Oompa and pop-rock musician and organizer Anna Rae have worked hard to not only welcome and accept LGBTQ+ artists, but also celebrate them. "I always see complaints about the lack of support in the city and I believe that is false from a community standpoint," she says. "The love we receive is unmatched." 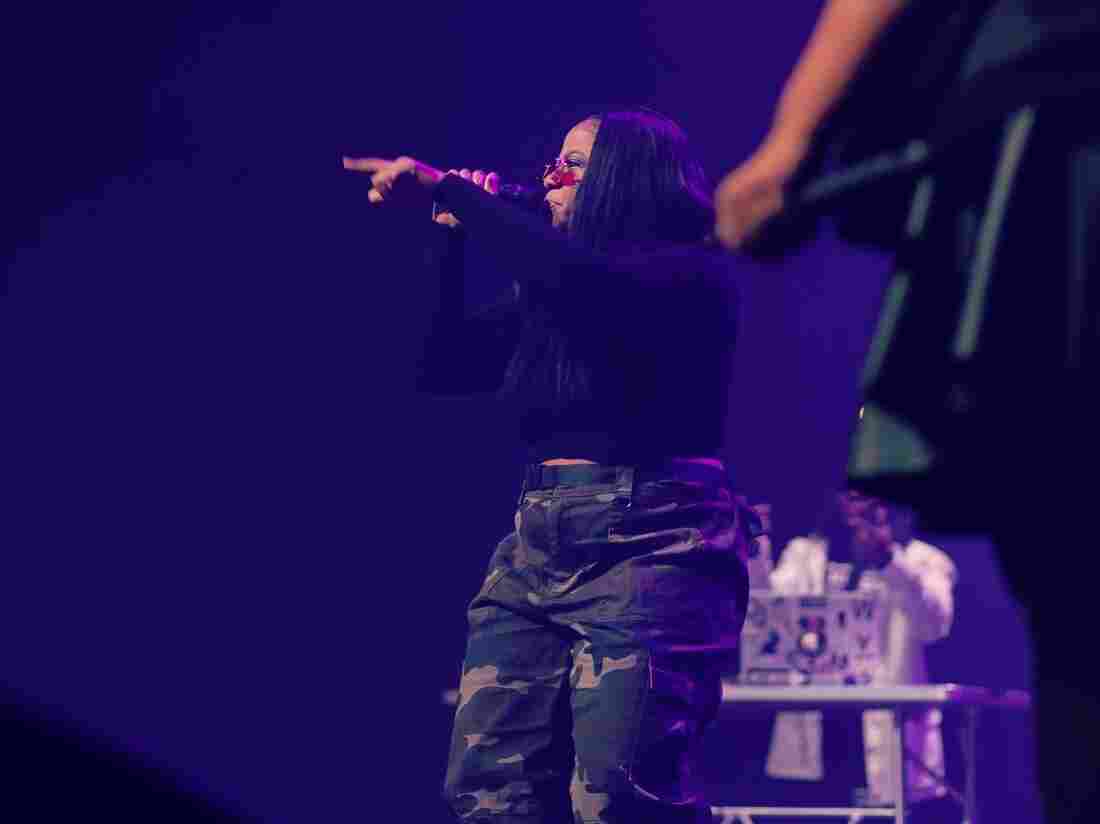 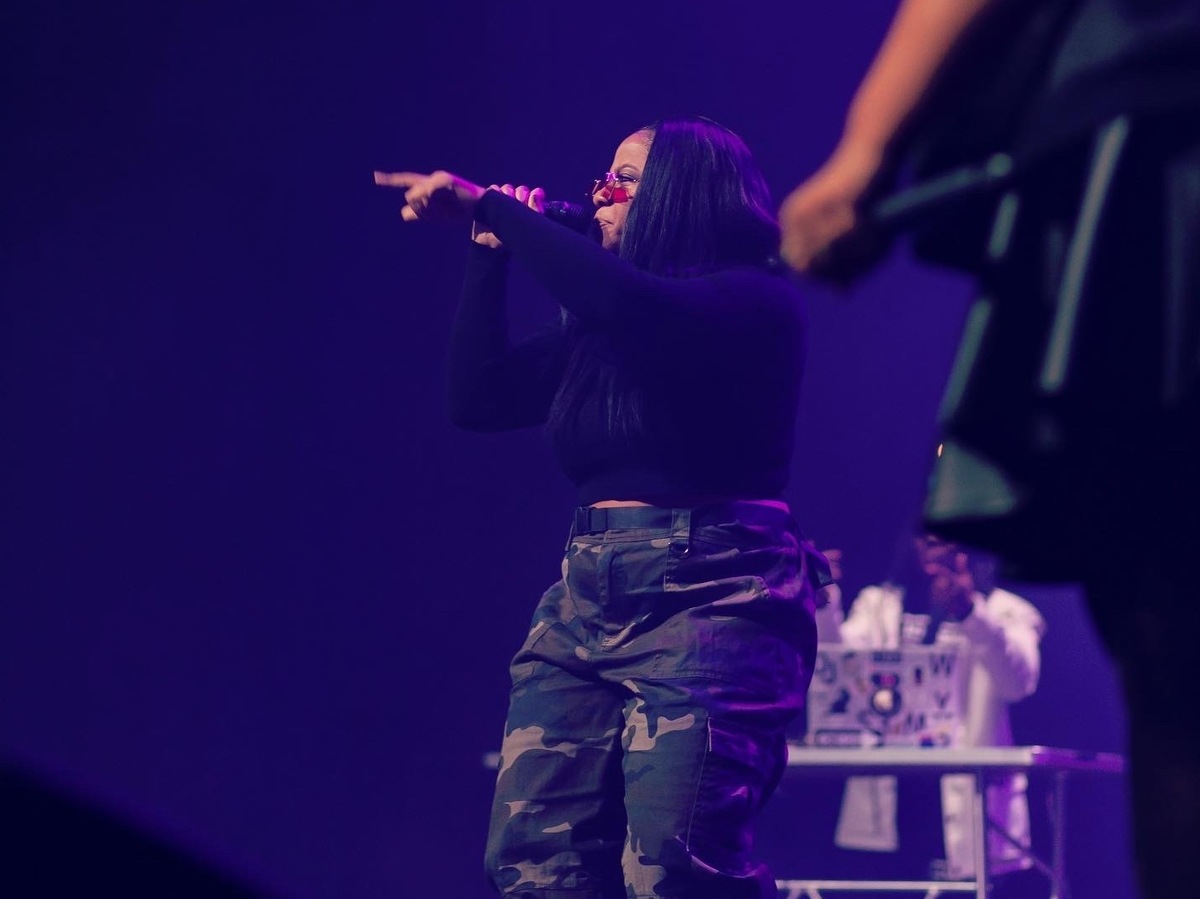 While community support alone won't be enough to overcome systemic issues — like heteronormative rock lineups, venues designed without accessibility in mind, the city's racism and the tokenization of underrepresented artists — that cause lack of accessibility for LGBTQ+ musicians in Boston, they've done the work to move things forward. To return to Oompa's chicken metaphor, the community's efforts are where we can find the recipe: the mix of ingredients that will truly represent the diverse set of flavors of Boston's music scene, and the steps for how to create greater inclusivity for all.

GBH worked with local music luminaries to curate a series of articles that provide a diverse and focused perspective on the local music scene in Boston. Knar Bedian is editor-in-chief of Sound of Boston, an online music publication focused on highlighting local emerging talent in Boston's music scene.