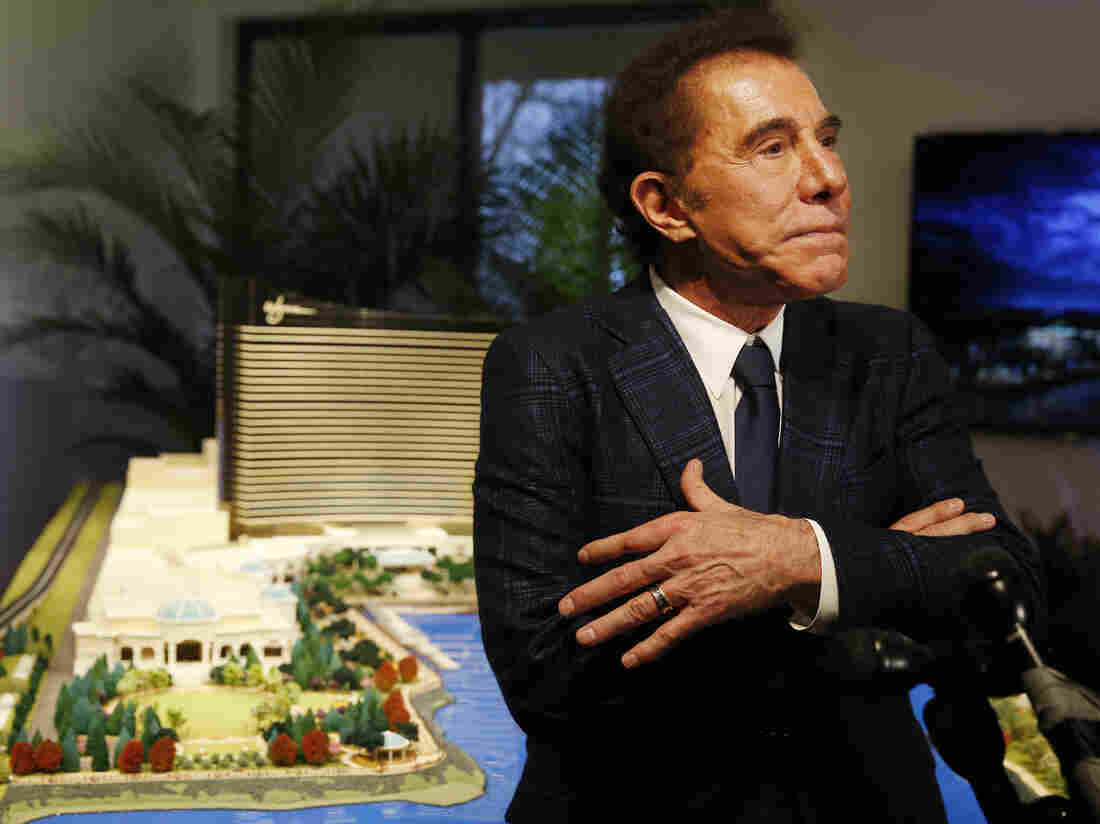 Steve Wynn speaks to reporters in Massachusetts in 2016, when he still led Wynn Resorts. In 2018, Wynn stepped down from the company after a series of allegations of sexual misconduct, including one allegation of rape. Wynn has denied any wrongdoing. Jessica Rinaldi/Boston Globe via Getty Images hide caption 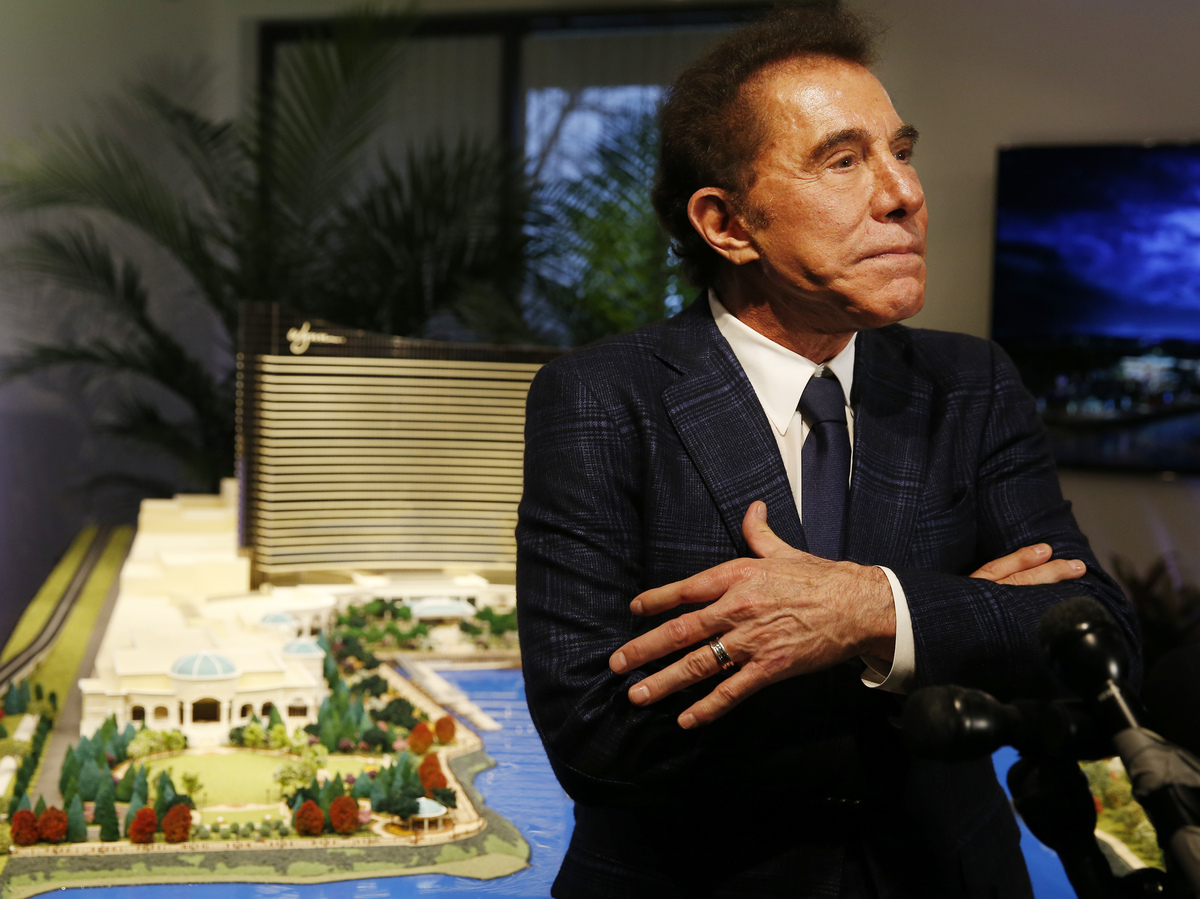 Steve Wynn speaks to reporters in Massachusetts in 2016, when he still led Wynn Resorts. In 2018, Wynn stepped down from the company after a series of allegations of sexual misconduct, including one allegation of rape. Wynn has denied any wrongdoing.

A major political donor, who just two years ago was forced out of his position as finance chair of the Republican National Committee, has contributed millions of dollars this election cycle to Republican candidates and political action committees aligned with the party.

Steve Wynn's political contributions were once seen as toxic. A series of investigative reports in The Wall Street Journal in 2018 detailed alleged rape, assault and harassment by the now-disgraced casino mogul. Wynn has denied all of the allegations.

He is now back — or at least his money is. In the past, Republicans demanded Democrats return money from Harvey Weinstein, who was later convicted of rape. In this case, Republicans have continued to accept Wynn's money.

GOP leaders, including Sen. Mitch McConnell of Kentucky and super PACs connected with him, have been the primary beneficiaries of Wynn's contributions. In fact, Wynn has given more than $6 million to 2020 political campaigns, which appears to be the largest amount he has ever individually donated. Among Wynn's contributions identified by NPR:

The Trump campaign referred NPR's inquiries to the RNC, which did not respond. McConnell's campaign declined to comment. The Senate Leadership Fund, American Crossroads, the NRSC and Stefanik's campaign did not respond to NPR's messages. Two attorneys who have represented Wynn also did not return messages seeking comment.

It's unclear whether Wynn may also be making additional donations to so-called "dark money" groups — political organizations that do not have to disclose their donors to the Federal Election Commission — but he has in the past. Between 2010 and 2012, when he was still the head of Wynn Resorts, the company donated half a million dollars to a conservative organization called Americans For Job Security. That donation was only revealed in 2019 after litigation by the watchdog group Citizens for Responsibility and Ethics in Washington.

Wynn joined the ranks of political megadonors after making a fortune in his decades-long career in casinos. Wynn founded and led Wynn Resorts, running businesses in Macau, Las Vegas and Boston.

In 2016, Trump tapped Wynn, a friend and former rival in the casino business, to help lead fundraising efforts for the Republican Party. That year, he individually gave more than $1 million to political candidates and committees, followed by a $729,217 donation to President Trump's inauguration through his company.

In 2017, before Wynn stepped down from his company amid allegations of sexual misconduct, he appeared at a White House event. President Trump applauded Wynn for "raising so much money for our great Republican Party."

Then, in January 2018, The Wall Street Journal reported that "dozens" of his employees had witnessed a "a decades-long pattern of sexual misconduct by Mr. Wynn." Subsequent investigations by the Massachusetts Gaming Commission and Nevada Gaming Control Board detailed allegations against Wynn, including a "nonconsensual sexual relationship" with one employee, and complaints that Wynn inappropriately exposed himself to employees during massages.

The most serious allegation stemmed from 2005. A Wynn employee was called in to Steve Wynn's office to provide a manicure. The employee said that Wynn then raped her in a massage room connected to his office, according to the Massachusetts Gaming Commission.

Wynn later testified in a separate civil lawsuit that he believed the encounter with his employee was consensual, though it reflected "bad judgment on my part." Wynn paid the woman a $7.5 million settlement on the condition that she sign a nondisclosure agreement. The company failed to "conduct any investigation whatsoever" into the rape allegation, the commission found.

Victims "felt that they didn't have a voice," the new CEO of Wynn Resorts, Matthew Maddox, told the commission in 2019. "That if they were to speak up they could be retaliated against. Or if they did, it would not be investigated. For that, I am truly sorry."

Wynn has denied all allegations of sexual misconduct, calling them "preposterous." He characterized the rape allegation as "extortion." He has not faced criminal charges. Still, he stepped down as CEO of his company. The head of the Republican Party, Ronna McDaniel, said she "removed" Wynn from his role as finance chair of the Republican National Committee. Some Republicans, including Ohio Sen. Rob Portman and then-House Speaker Paul Ryan, donated contributions they'd received from Wynn to charity.

McDaniel and the RNC, on the other hand, told Fox News that they would keep Wynn's contributions, saying that Wynn "should be allowed due process." Still, McDaniel pledged in Jan. 2018 that if investigations of Wynn found "any wrongdoing, we will absolutely return 100% of that money."

DNC refuses to give up $300K in dirty Harvey Weinstein contributions & now even a Dem senator is calling them out https://t.co/y1lcGsIAKu

Just a few months before that, in October 2017, officials and advisors with Republican PACs criticized Democrats for taking contributions from Harvey Weinstein, the former movie producer who was later convicted of rape. McDaniel called Weinstein's money "dirty."

Democrats: put your money where your mouth is. Return all the Weinstein money. pic.twitter.com/3uQN0dm76A

But now that the shoe is on the other foot, the RNC has taken a different stance. Despite the findings of casino regulators in Nevada and Massachusetts, the RNC, McConnell, and top Republican officials have accepted Steve Wynn's contributions.