Accessibility links
'Rebecca' On Netflix Is Haunted By Hitchcock Netflix's adaptation of Daphne du Maurier's swooning gothic novel strips it of subtext — and sex — and tacks on a ending that misunderstands the "romance" at its center. 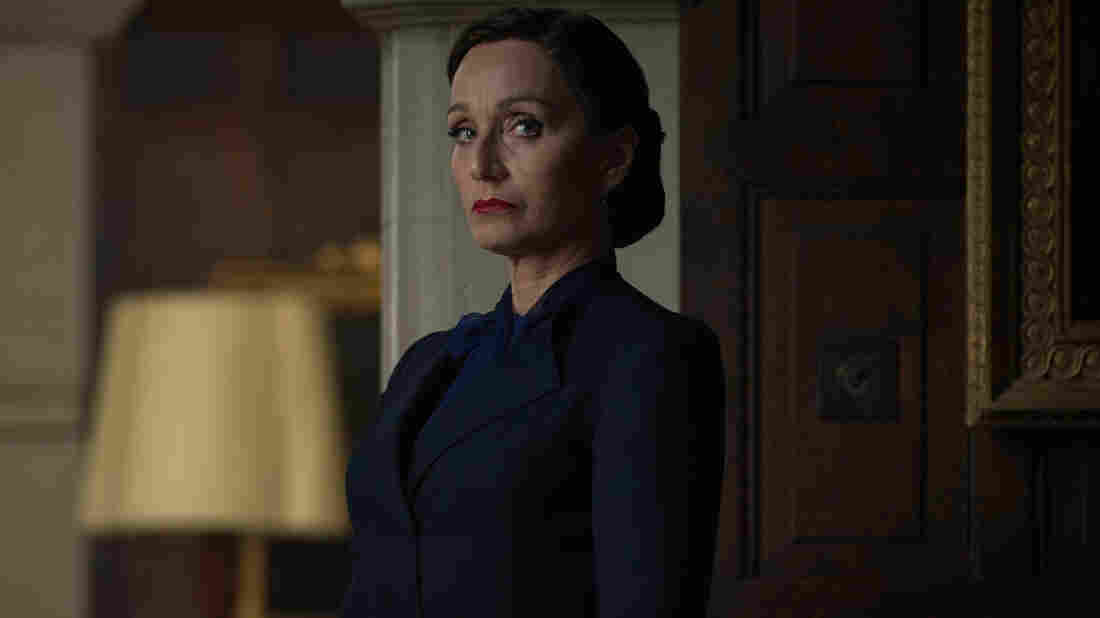 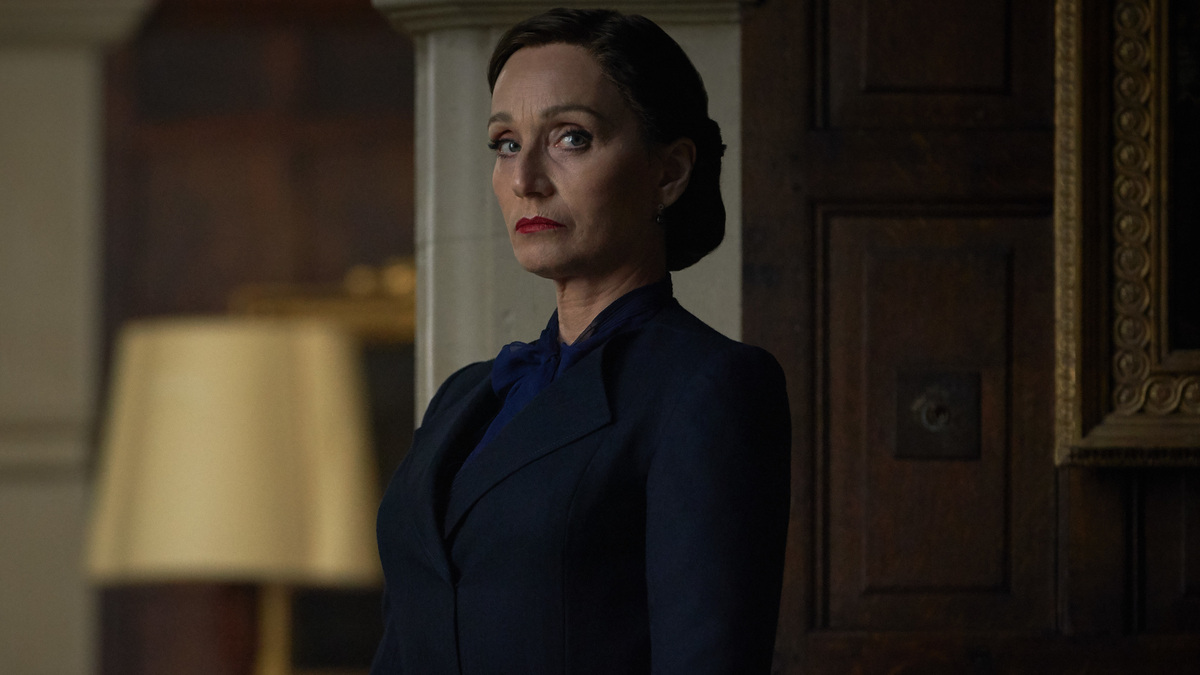 The amount of enjoyment you get out of Netflix's wan remake of Alfred Hitchcock's 1940 swooning gothic romance Rebecca depends entirely on how familiar you are with that original film, and the 1938 novel by Daphne du Maurier from which it was adapted.

(Side note: The filmmakers of the Netflix version maintain they are simply re-adapting ... and updating ... the novel, and pointedly not attempting to remake Hitchcock — but as they've preserved several of the alterations he made to the story, that assertion has more holes in it than the title character's doomed sailboat. But we'll come to that.)

If you go into this Netflix retread with nothing to compare it to, it'll go down easy enough. It's pretty to look at — the French Riviera of the film's opening act is colorful and sunny, and the Cornish cliffs of its conclusion are dramatic and thrilling.

If you haven't read or seen the tale before, here are the basics: Our unnamed, unassuming, inexperienced narrator (Lily James) meets the dashing British aristocrat Maxim de Winter (Armie Hammer) while she's working as an assistant to an insufferably imperious lady (Ann Dowd) in Monte Carlo. There's a whirlwind sort-of-romance, and Maxim proposes, taking her back to Manderley, his massive estate in Cornwall.

Our narrator is actually the second Mrs. de Winter — the first, named Rebecca, was a fabulous and charming beauty, beloved by all — including Mrs. Danvers (Kristin Scott Thomas), Manderley's chief housekeeper. James' character is made to feel like an interloper, both by Danvers and by an increasingly distant Maxim. The immense estate and her new duties gradually overwhelm her as Danvers works to undermine her authority and her sanity, until a horrible discovery is made, involving a scuttled sailboat.

There you go. And again, if this is your first visit to Manderley, it'll prove distracting enough for the COVID era. A little long, a little flabby in the middle maybe, but: Fine. Perfectly fine.

Okay. That's the end of the review for folks who are coming to this story fresh.

Everyone else: Pull up a chair.

I decided to re-watch the 1940 Hitchcock film the day before watching the Netflix version, which was, by any measure, a huge mistake.

Let's acknowledge: It is wildly unfair to compare this knock-off to Hitchcock's iconic classic, which, not for nothing, won the Academy Award for best picture. But it's also inevitable, because what the filmmakers have produced is not a fresh reimagining, but a dully dutiful remake.

And there is, of course, Judith Anderson as Mrs. Danvers, the performance that defines the movie. Anderson is unforgettable, largely because she appears to be doing so little while serving you so much — she remains unnervingly still, expressionless and unblinking from scene to scene, yet manages to radiate menace ... and subtext. (The scene in which Danvers gently strokes the narrator's (Joan Fontaine) cheek with the sleeve of a mink coat has single-handedly launched a thousand queer media studies theses.)

The new Netflix film, on the other hand, is anti-... all of that. Anti-subtext, anti-horny, anti-swoon — at least in the performances, which are dialed back in a manner that renders them more realistic, yet far less interesting. Instead, the film shunts off all of its swooniness to its direction, using dream sequences filled with overwrought special effects to establish James' character's disorientation. Where Hitchcock used simple shadow and light to drive home Fontaine's alienation and isolation, director Ben Wheatley stages a ham-fisted scene at a masquerade ball to literalize James' character's mental breakdown.

That scene isn't doing the work it's meant to, but you know who is? Kristin Scott Thomas, is who. Her Danvers isn't nearly as outsized as Anderson's, but her choices are just as smart and specific. It must be said, however, that by starting the film in such a relatively grounded place, the journey Thomas is tasked with taking proves a much longer walk than Anderson's was, as the 1940 Danvers was pretty clearly off, from the jump. When 2020 Danvers goes round that final bend, I wasn't necessarily on board with her.

But what's most mystifying is how thoroughly Wheatley's film seems to have misread the ostensible "romance" between James' character and Hammer's Maxim. In both the novel and the 1940 film, there is a great, yawning distance between the second Mrs. de Winter and her husband — he is much older, sneeringly condescending, and even cruel, where she is fearful, unsure and subservient. Theirs is less a relationship than a pathology, but the Netflix film envisions it as a romance that is destined to be happy, once all those pesky long-buried secrets come to light. Not only does it supply James' character with a final triumphant moment in her conflict with Danvers (galling! sacrilege!), it tacks on an ending which completely refutes the story's central, intriguing darkness.

There's also the fact that James spends most of the film on the perpetual verge of tears, while Hammer can't seem to muster Maxim's vaunted rage, which is so frequently referenced in the script, but never manages to make it to the screen.

There is, however, one way that the Netflix version surpasses Hitchcock's, and it's entirely due to the 80 years' worth of developments in cinematic technology that stretch between the two films. Hitchcock shot his film almost entirely on Hollywood soundstages, so many exterior scenes look hilarious today. Again and again, he had his actors declaim their lines or "drive" a car in front of rear-projections that hurt the eyes.

Wheatley shot his exteriors on location, with a bit of CGI goosing here or there, and the visual result is satisfyingly grand and sweeping, mostly.

With one notable exception that captures the difference between this new version and the classic that preceded it.

Hitchcock's opening shot tracks along the twisting and turning front drive of Manderley until the massive house finally comes into view — a sprawling, gloomy vision haunted by memory and regret. It's breathtaking.

Which makes sense, as it was carefully designed to be. It was a painstakingly wrought miniature, engineered to impress ... and unsettle.

The same opening shot, in Wheatley's film, tracks up a (much, much longer) drive, only to end up at a house, a real house, that carries none of the sinister magic and menace of Hitchcock's Manderley.

Instead it looks ... like a big house, basically. And instead of thrilling to the mysteries housed within its leering windows and crumbling masonry, you find yourself idly wondering what the guy's paying for groundskeeping.