Accessibility links
'Dark Archives' Explores The Use Of Human Skin In Bookbinding Megan Rosenbloom tells readers an adventurous tale of how her morbid curiosity brought her across an ocean to investigate the origins, motivations and techniques behind this macabre practice.

'Dark Archives' Explores The Use Of Human Skin In Bookbinding

'Dark Archives' Explores The Use Of Human Skin In Bookbinding 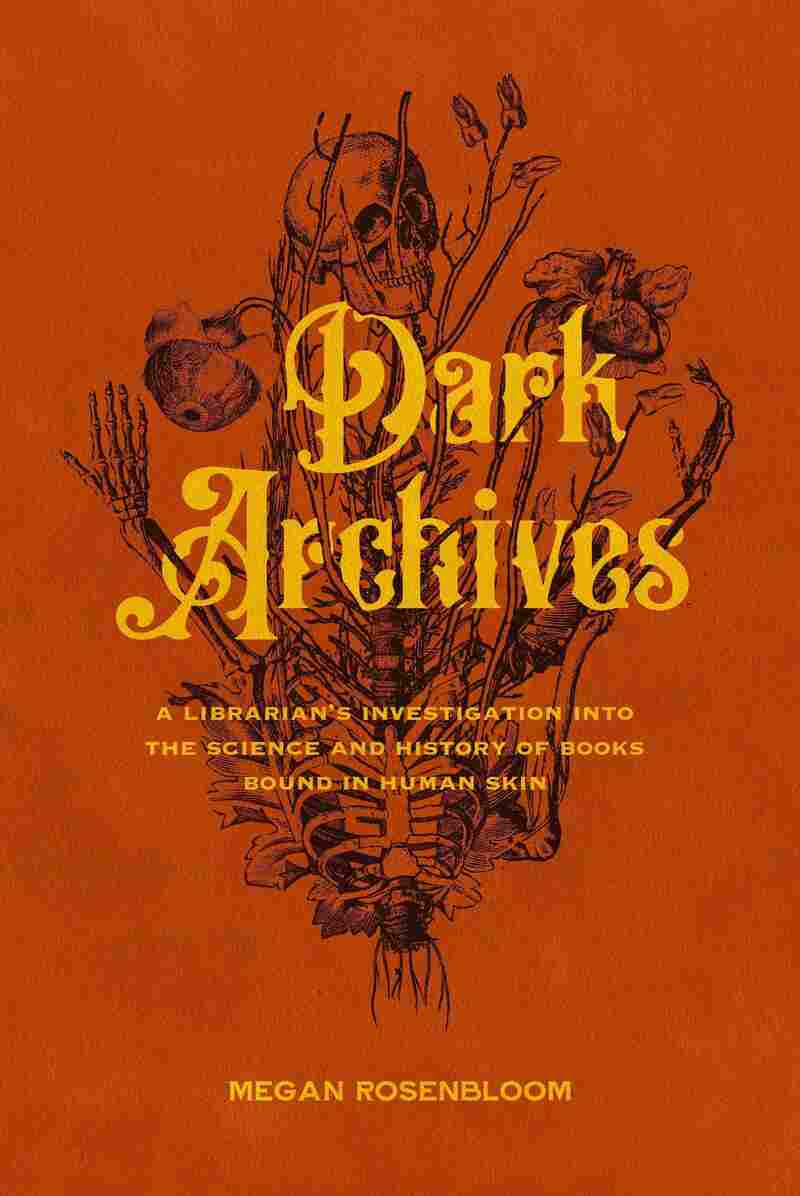 Dark Archives: A Librarian's Investigation into the Science and History of Books Bound in Human Skin, by Megan Rosenbloom Farrar, Straus and Giroux hide caption 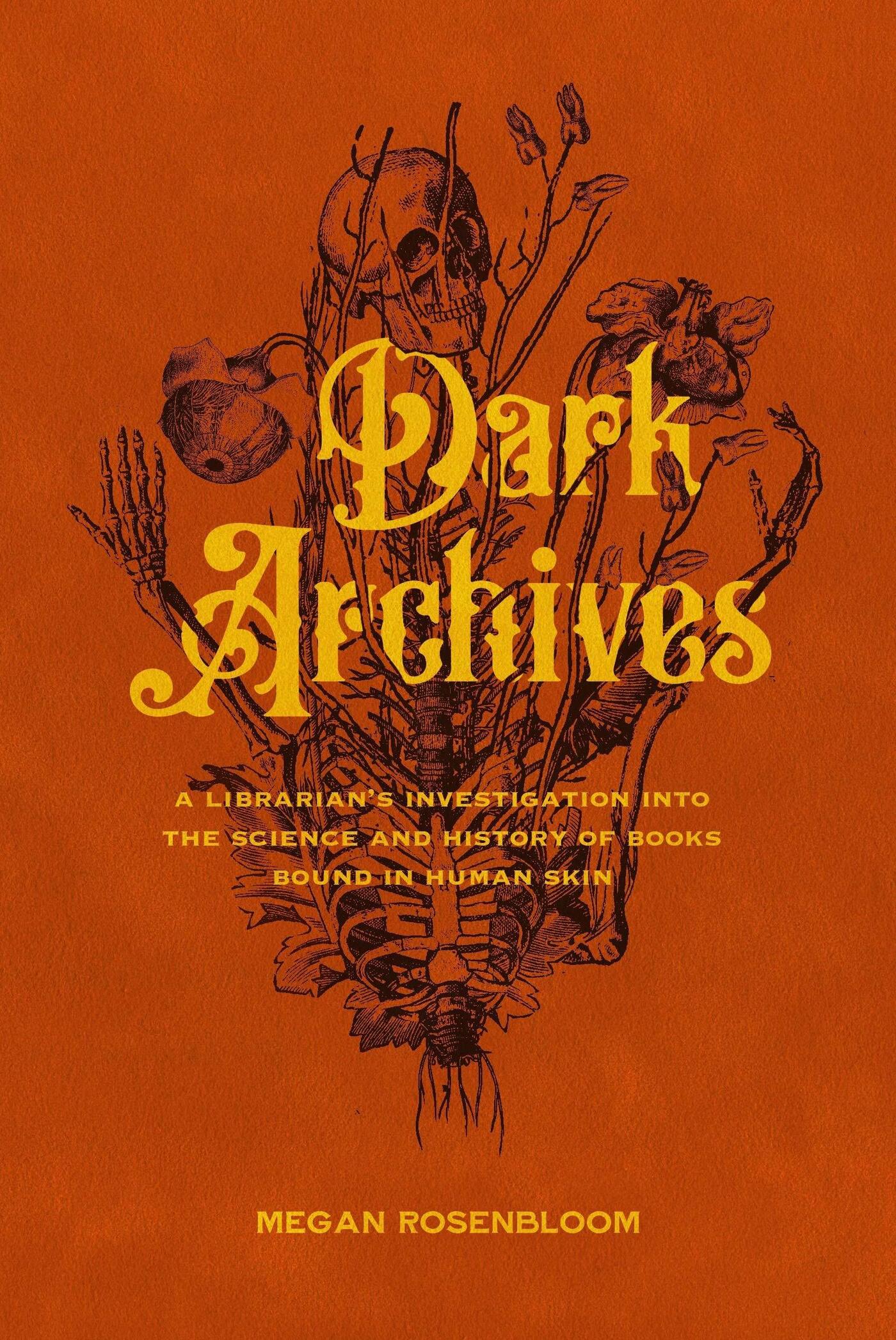 Dark Archives: A Librarian's Investigation into the Science and History of Books Bound in Human Skin, by Megan Rosenbloom

In January of 1869, Dr. John Stockton Hough stooped over an autopsy table to examine the emaciated corpse of Mary Lynch.

When Dr. Hough opened Lynch's chest cavity to inspect her tuberculosis-wracked lungs, he noticed an unusual cyst in her pectorals. Under a microscope, his vision swam as countless tiny worms wriggled around. Lynch was the first known case of trichinosis in Philadelphia.

However, Dr. Hough is not most famous for this discovery but, rather, for what he did immediately afterward: He cut a slice of Lynch's skin from her thighs and preserved it in a chamber pot. Decades later, Dr. Hough used this preserved human skin to bind three of his most prized books, all of which dealt with women's health.

Now, zoom ahead to modern-day Philadelphia. Megan Rosenbloom, a young librarian-in-training, wanders through the Mütter Museum's collection of medical oddities. In an inconspicuous corner, she discovers a display case of leather-bound books with their covers closed — unusual for rare books. The caption explains these books are closed because their binding is more notable than their contents, and that's because they were made from human skin. This marks the beginning of Rosenbloom's obsession with "anthropodermic bibliopegy" and the opening scene to Dark Archives: A Librarian's Investigation into the Science and History of Books Bound in Human Skin, an adventurous tale of how one librarian's morbid curiosity leads her across the Atlantic and back as she investigates the origins, motivations, and techniques behind this macabre bookbinding practice.

Though one might hypothesize that someone sinister created these books, most were made by gentleman doctors during the 19th-century. Then a rising professional class, many doctors sought to distinguish themselves by scholarly activities and, in America, "rare book collecting would become deeply ingrained in what it meant to be a member of the doctoring class."

Structured like a detective thriller, this episodic book is organized around a series of visits to erudite experts and rare archives around the world — from a smelly tannery in upstate New York, to a fluorescent basement full of flayed cadavers, to Hell itself — which just so happens to be a wing of the Bibliothèque national de France in Paris.

This nerdy adventure immediately brought to mind the movie National Treasure, a guilty pleasure of mine, starring Nicolas Cage as he puzzles through early American history. But instead of planning a heist to steal the Declaration of Independence, Rosenbloom takes readers on unexpected excursions into the history of clinical medicine, the ethics of consent, and death-positivity.

One of the most famous alleged-human-skin books, bound in the skin of a profiteering killer named William Burke and housed in Surgeons' Hall Museums in Edinburgh alongside the skeleton from which it was scalped, unveils the the grisly commercial relationship between body snatchers and surgical schools. The Royal College of Surgeons of Edinburgh, was one of the preeminent schools for surgeons in the 19th-century in part because it was able to supply students with the "darkest needs of the study of anatomy" — i.e. fresh cadavers.

Driven by an engine of curiosity, Rosenbloom moves through history at a brisk pace, bookending each chapter with excellent hooks and cliff hangers, all of which makes for propulsive reading. But Rosenbloom does lose momentum toward the end of the book, when she veers away from myth-busting and bloody histories to examine the fine print of how corpses intersect with the law. Not property, nor a person with rights, corpses occupy a legal gray area and the law varies by nation. In a book that otherwise does an excellent job of making niche academic interests entertaining to a larger audience, this is one of the few moments where Rosenbloom loses sight of her readership.

A species of reparative writing, Dark Archives excavates the hidden stories stitched into the binding of anthropodermic books and, in doing so, restores some humanity to victims of medical exploitation. Delightful and propulsive, Rosenbloom's measured balance of bloody thrills with historical fact and ethical nuance makes Dark Archives a titillating Halloween read.

Connor Goodwin is a writer and critic based in Lincoln, Nebraska. His work has appeared in The Atlantic, The Washington Post and The Seattle Times, among other outlets.