Accessibility links
Entreating Pa. Residents To Vote, Obama Delivers Rebuke Of Trump "What we do these next 13 days will matter for decades to come," the former president stressed. 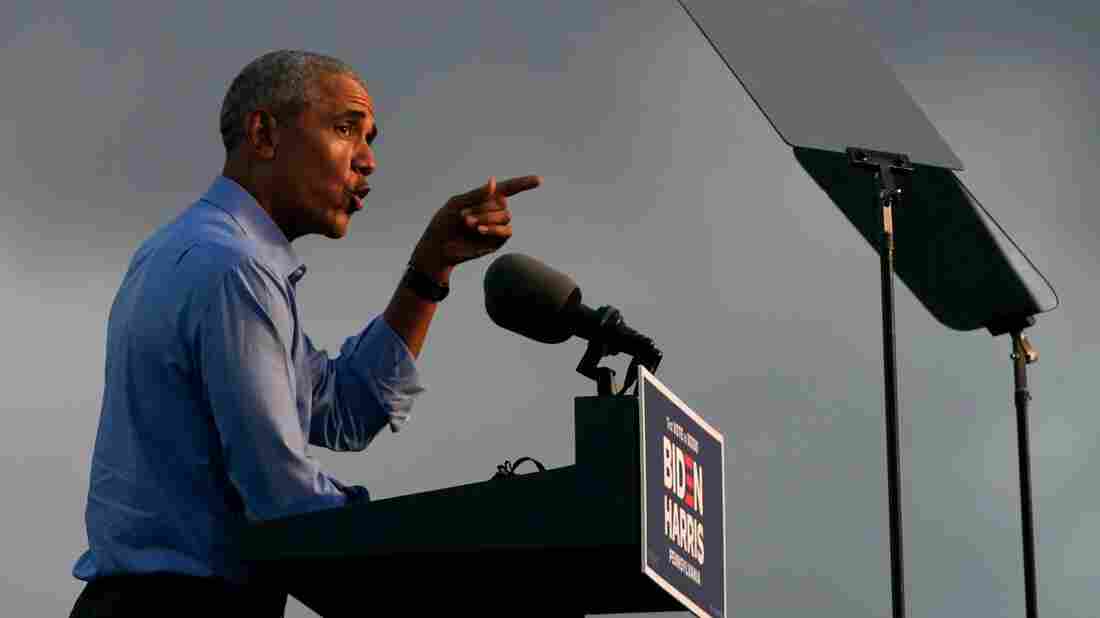 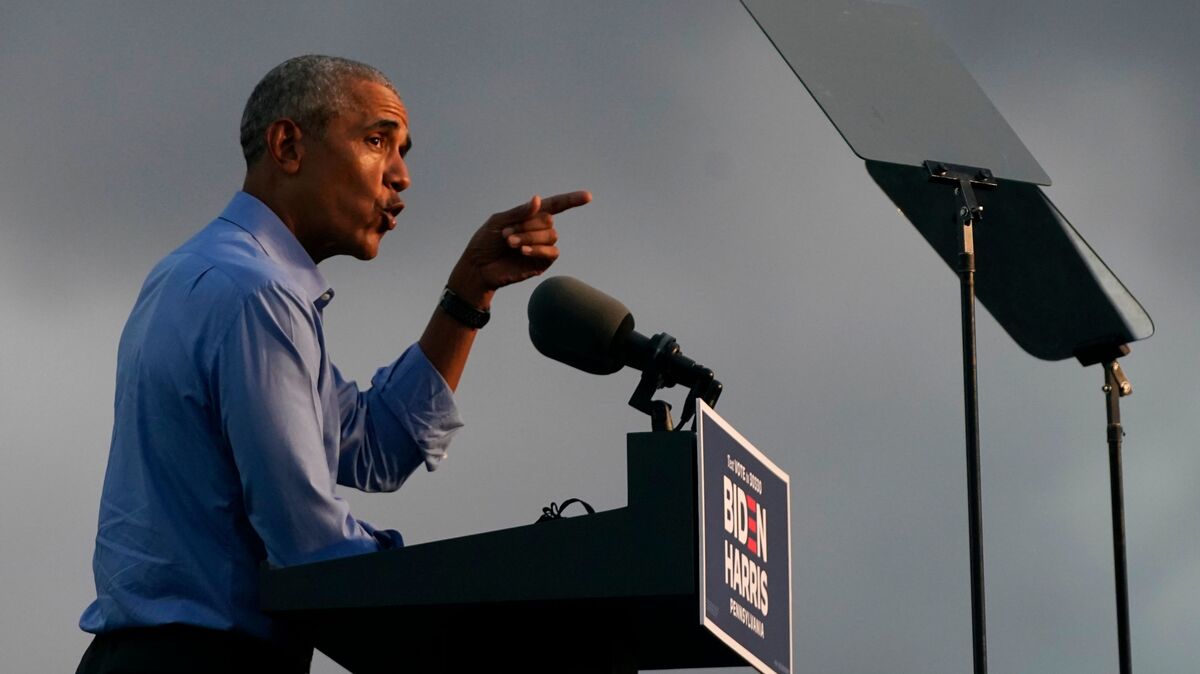 Former President Barack Obama urged Philadelphians to make a voting plan and cast their ballots early for Democratic nominee Joe Biden during his first in-person campaign event of the 2020 contest in a state that may be crucial to a Biden victory.

"Philadelphia, we got 13 days — 13 days until the most important election of our lifetimes," Obama said Wednesday evening during a drive-in car rally outside Citizens Bank Park, home to the Philadelphia Phillies. "And you don't have to wait for Nov. 3 to cast your ballot," he said, citing early voting and voting by mail.

"What we do these next 13 days will matter for decades to come," he stressed.

"We've got to turn out like never before. We cannot leave any doubt in this election. We can't be complacent. I don't care about the polls. There were a whole bunch of polls last time," he said, referring to 2016. "[It] didn't work out because a whole bunch of people stayed at home and got lazy and complacent. Not this time."

Because of concerns over the coronavirus, the event was notably smaller than when Obama and former first lady Michelle Obama joined then-Democratic nominee Hillary Clinton in front of thousands of supporters in Philadelphia on the eve of the 2016 election, which Clinton lost.

On Wednesday, Obama delivered blistering criticism of his successor, slamming President Trump's response to the pandemic and noting the rising number of cases in the country.

"Donald Trump isn't suddenly going to protect all of us. He can't even take the basic steps to protect himself," he said, referring to Trump's recent hospitalization at Walter Reed National Military Medical Center for COVID-19 treatment.

"Here's the truth," Obama said. "I want to be honest here. This pandemic would have been challenging for any president. But this idea that somehow this White House has done anything but completely screw this up is just not true."

He admonished the Trump administration for dismantling environmental protection programs and its efforts to repeal the Affordable Care Act. He also reprimanded Trump for his rhetoric and spreading misinformation.

"America is a good and decent place," Obama said. "But we've just seen so much noise and nonsense that sometimes it's hard for us to remember. Philadelphia, I'm asking you to remember what this country can be."

Obama also used his speech as an opportunity to reflect on his personal relationship with his former running mate.

"He and I came from different places. We came from different generations. But I came to admire Joe as a man who has learned early on to treat everybody he meets with dignity and respect," Obama said. "And that empathy, that decency, that belief that everybody counts — that's who Joe is. That's who he'll be. And I can tell you the presidency doesn't change who you are; it reveals who you are. And Joe has shown himself to be a friend of working people."

Before delivering his remarks, Obama participated in a discussion with Black male community leaders at the Hank Gathers Youth Access Center on issues facing Black men and the significance of voting. Obama then stopped by a voter mobilization center to give a socially distanced pep talk to volunteers.

The Trump campaign insisted Obama was sent in to campaign for Biden as backup.

"Joe Biden is clearly not up to the rigors of campaigning for president, so he's calling in Barack Obama as a reinforcement," ​Trump campaign communications director Tim Murtaugh said in a statement ahead of Obama's speech.

Biden has spent most of the week out of the public eye at his Delaware home ahead of Thursday night's final debate against Trump.

While Obama had largely avoided direct confrontations with his successor — as is customary for past presidents — he delivered a searing critique of Trump during the Democratic National Convention in August. (Trump has repeatedly rebuked Obama as well.)

"For close to four years now, he's shown no interest in putting in the work; no interest in finding common ground; no interest in using the awesome power of his office to help anyone but himself and his friends; no interest in treating the presidency as anything but one more reality show that he can use to get the attention he craves," Obama said at the time.

He also raised nearly $8 million in a joint virtual fundraiser with Biden in June, and has recorded videos for Democrats and the campaign, calling on people to vote.

That the Biden campaign deployed Obama to Pennsylvania conveys the importance the swing state holds in the race for the White House.

The former vice president is currently polling several percentage points ahead of Trump in the state, according to a polling average from FiveThirtyEight.

Trump, who won the state by just 44,000 votes in 2016, acknowledged the closeness of this year's race in the Keystone State during a Tuesday night rally in Erie.

"Before the plague came in, I had it made. I wasn't coming to Erie," Trump said. "I mean, I have to be honest. There's no way I was coming. I didn't have to. I would have called you and said, 'Hey, Erie if you have a chance, get out and vote.' "

More than 1 million votes have already been cast in Pennsylvania, according to the U.S. Elections Project.