Accessibility links
Dozens Of Artifacts Apparently Vandalized At Berlin's Museums Police, who believe vandalism to be the cause, are unsure of the motive. German media is speculating a link to a conspiracy theory. The extent of the damage won't be clear until after restoration. 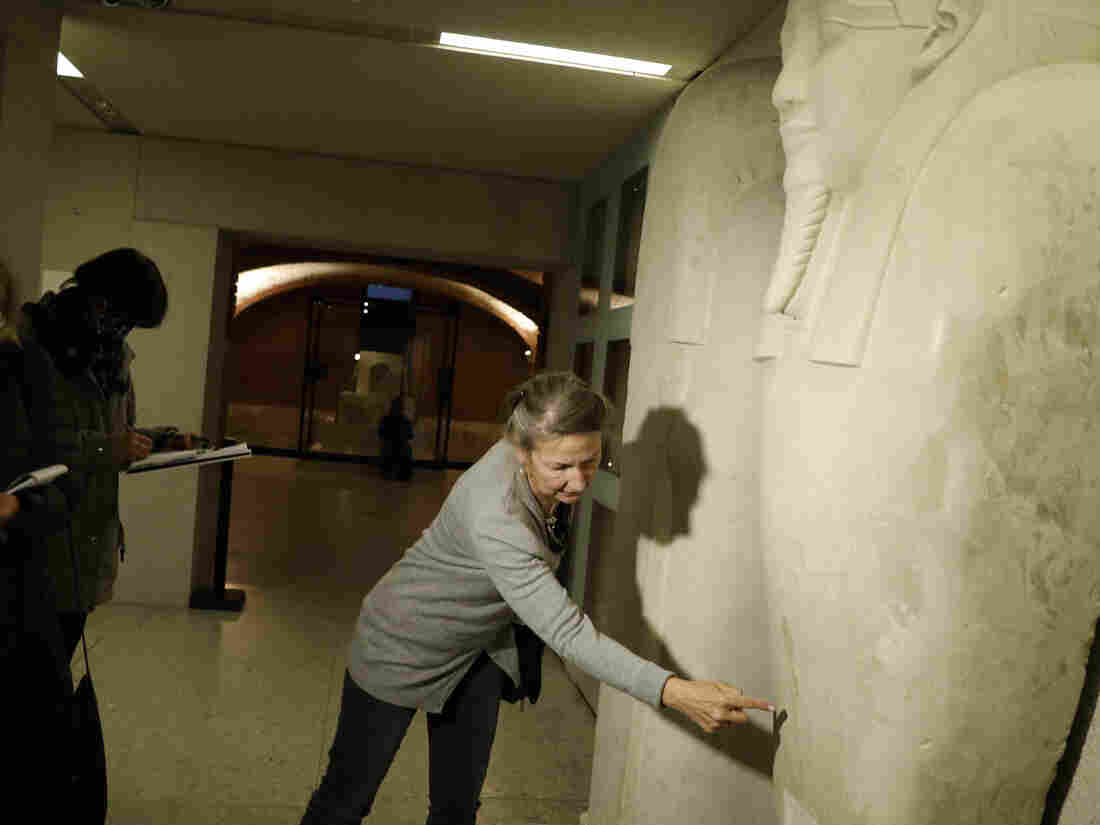 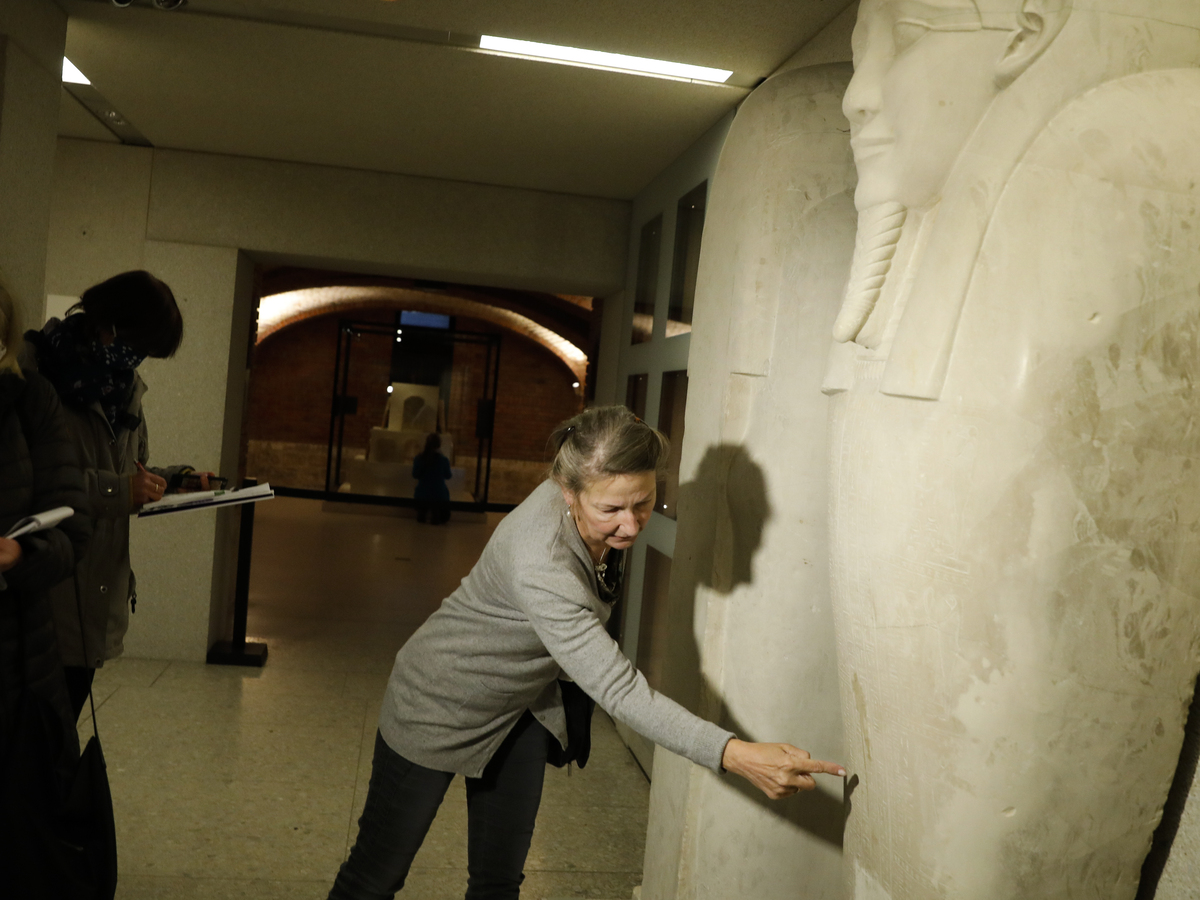 Friederike Seyfried, director of Antique Egyptian Department of the Neues Museum in Berlin, shows media a stain from liquid on the Sarcophagus of the prophet Ahmose on Wednesday.

Statues and Ancient Egyptian sarcophagi are among about 70 objects that have been damaged with an oily substance at several of Berlin's major museums.

Police, who believe vandalism to be the cause, are unsure of the motive. But German media is speculating a link to a conspiracy theory propagated by coronavirus deniers.

Christina Haak, the deputy director general of Berlin State Museums, told reporters Wednesday that the incident amounts to the greatest damage to the museums' artefacts since World War II.

It won't be possible to judge the extent of the damage until the restauration work has been done, Haak said. She added that state-owned objects are not insured, and that three or four of the items damaged were on loan from other museums.

Carsten Pfohl, the head of Berlin Police's Art Crime Unit, said the damage took place while the museums were open on Oct. 3. That day was the 30th anniversary of German Reunification, a holiday that drew thousands of visitors to museums. Whether the anniversary is of significance to the crime is unclear, and there appears to be no link between the objects damaged.

"This is a variety of objects that do not have any immediate connection in terms of context," Pfohl said. "We have no self-incriminating letter or anything like that, so we have to assume for now that the motive is completely unclear."

News only broke of the damage on Tuesday night, more than two weeks later, after police sent emails to visitors who'd booked their tickets online in an appeal for witnesses.

Pfohl said his unit waited before making the damage public for security reasons, and because they wanted to analyze the clear, oily, non-corrosive substance first. He added that security camera footage has not yielded any leads. 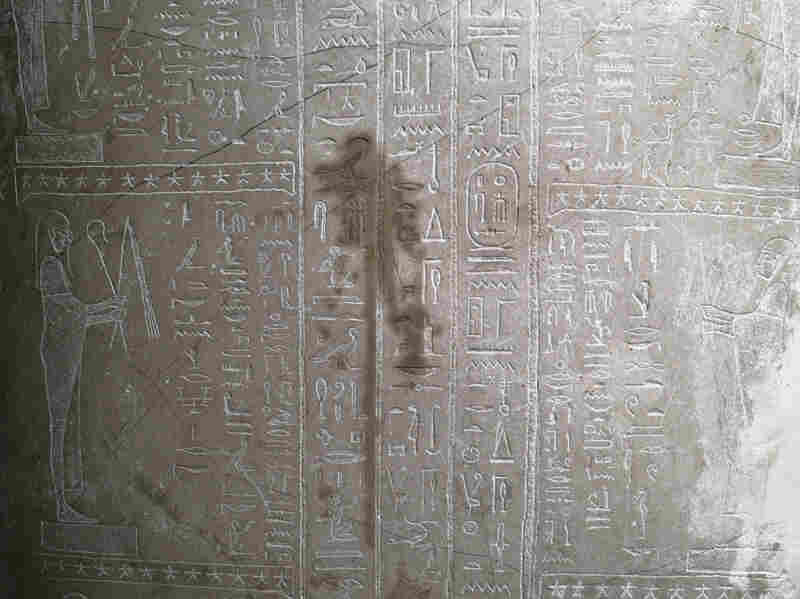 A stain on Sarcophagus of the prophet Ahmose inside the Egyptian Court of the Neues Museum after smeared with a liquid. Markus Schreiber/AP hide caption 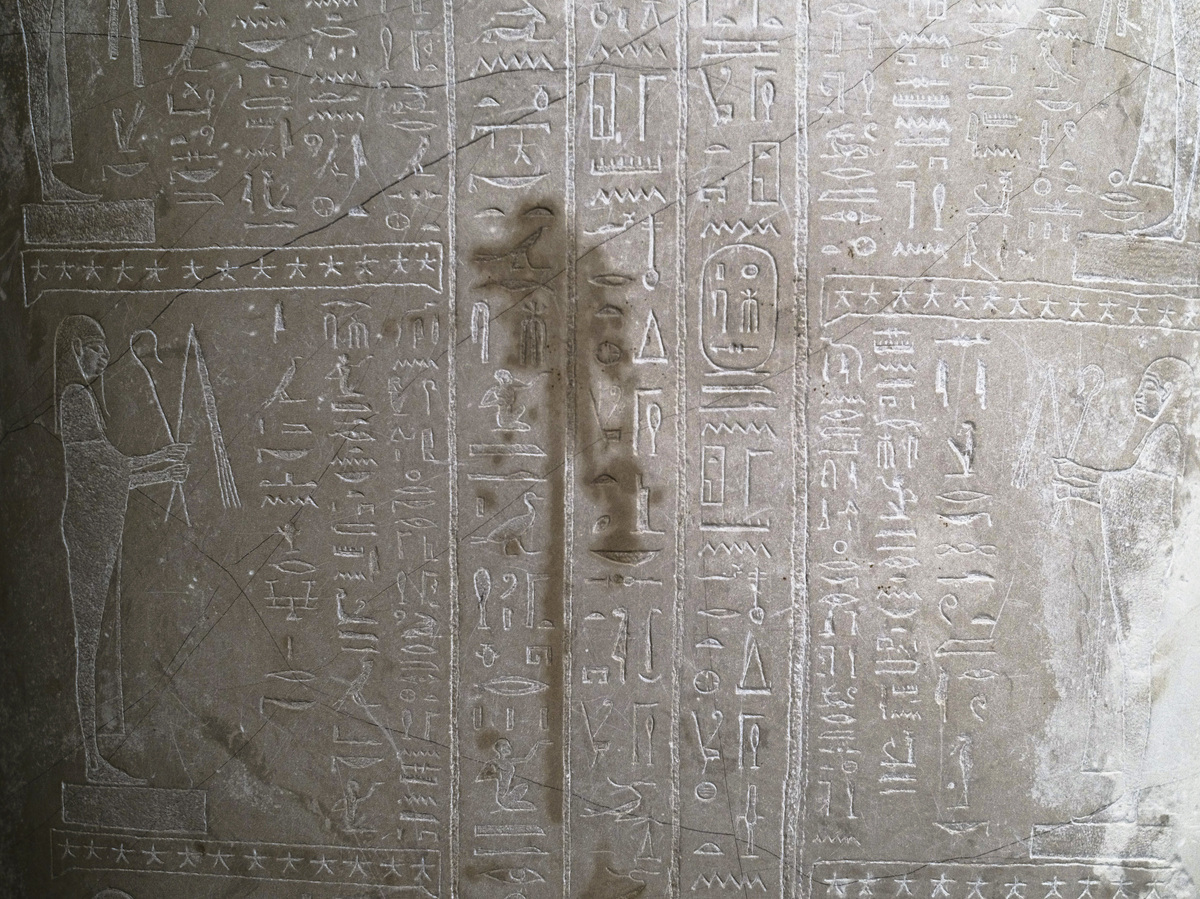 A stain on Sarcophagus of the prophet Ahmose inside the Egyptian Court of the Neues Museum after smeared with a liquid.

Pfohl would not comment on press speculation about the possible involvement of conspiracy theorists. However, the weekly broadsheet Die Zeit and public radio broadcaster Deutschlandfunk, which broke the news together, were the first to draw a link between the vandalism and conspiracy theorists.

One of the conspiracy theorists who's gathered a large following of coronavirus deniers, Attila Hildmann, has claimed a number of times on his Telegram channel that the Pergamon Museum is the center of a 'global Satanism scene' which, his followers allege, Chancellor Angela Merkel has been using for 'human sacrifices,' noting that she lives opposite the Museum.

Over the past few months, police have also been investigating damage to columns on the Museum Island, a UNESCO site and home to the Pergamon Museum, the Alte Nationalgalerie and the Neues Museum, where the recent attack on artworks took place.