Accessibility links
Trump And Biden Could Not Be Further Apart On Climate Change Despite the cascade of other crises this year, climate change has emerged as a key election issue. The two major-party presidential candidates' positions on it could not be more different. 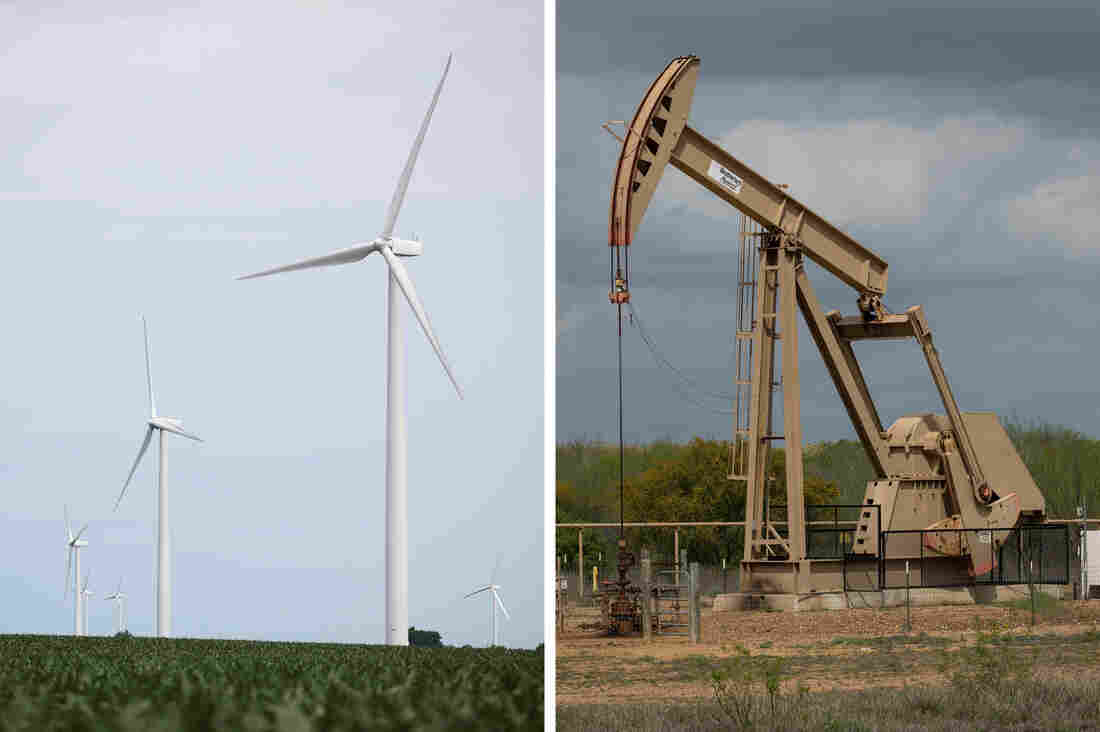 Wind turbines near Dwight, Ill. and a pump jack in Cotulla, Texas. The presidential candidates have opposing views on the future of U.S. energy. Scott Olson and Loren Elliott/AFP/Getty Images hide caption 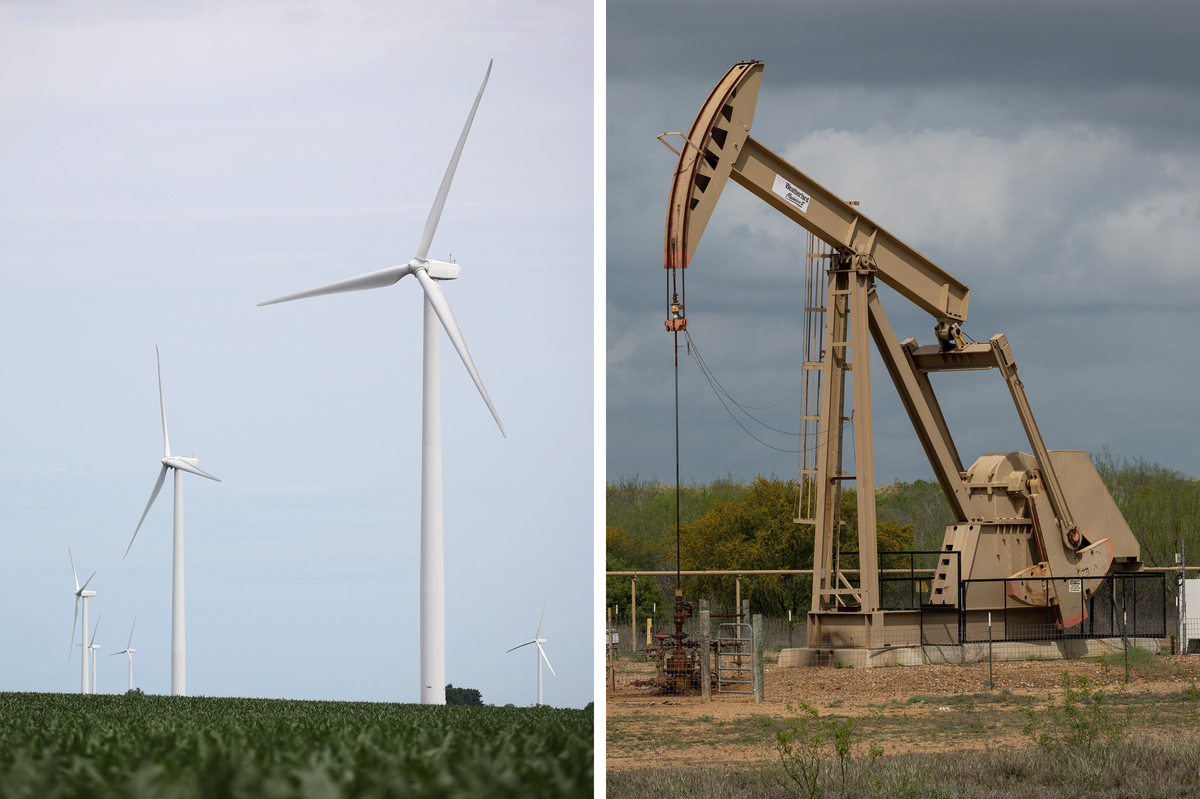 Wind turbines near Dwight, Ill. and a pump jack in Cotulla, Texas. The presidential candidates have opposing views on the future of U.S. energy.

Despite the cascade of other crises this year, climate change has emerged as a key election issue.

Two-thirds of Americans want the government to do more about it, and the same share of Biden supporters say it's very important to their vote. While not many Trump supporters overall agree, there's more concern among younger Republicans.

The stakes are high as more Americans experience record heat, wildfires, hurricanes and flooding, and the two candidates could not be further apart. Joe Biden calls climate change an existential threat to our health, economy and national security. President Trump continues to question climate science.

Here are six takeaways from Trump's first term on climate and energy, and the challenges he or Biden would face if elected.

1. President Trump's push to boost fossil fuels is out of step with a fast-changing market

Trump doesn't mention coal much these days, a sharp contrast to 2016 when he boasted to crowds that miners should "get ready because you're going to be working your asses off." In fact, coal has continued its collapse.

"We just reached a big milestone," says Mary Anne Hitt of the Sierra Club. "Sixty percent of the coal-fired power plants are now retired, or announced to retire."

At times, Trump and his administration even tried and failed to save individual coal power plants, and the list of bankruptcies has grown.

A major reason goes back to the Obama presidency, when incentives for wind and solar prompted a lot of construction. Once those facilities are built the fuel is free and coal plants just can't compete. Renewable energy has grown to 17% of the country's electricity generation, according to the U.S. Energy Information Administration, surpassing coal for the first time in over a century.

As for oil and gas, Trump reversed plans to block construction of the Keystone XL and Dakota Access pipelines, and expanded federal areas open to drilling. Production has indeed increased on his watch, though it's a trend that started under President Barack Obama with the rise of fracking for natural gas and the lifting of export restrictions.

Still, oil and gas companies are feeling the pressure as more cities, states, businesses and utilities announce aggressive moves to decarbonize. Even some oil majors have pledged to become carbon-neutral.

Coal's decline has reduced energy emissions, but those from transportation have proved stubborn. And the Trump administration relaxed many climate regulations, including on tailpipe emissions. Overall, though, U.S. greenhouse emissions are going down and that will likely continue.

U.S. Emission Reductions Slowed After Trump Pulled Out Of Paris Accord

But scientists say greenhouse gas emissions must be reduced far more dramatically, and soon, to limit global warming to 2 degrees Celsius above pre-industrial temperatures. A landmark 2018 report warned that even going past 1.5 degrees will have catastrophic consequences.

The next few years will be crucial as a number of fossil fuel projects face uncertain futures, including the Keystone XL and Dakota Access pipelines, coal export terminals, and natural gas export facilities. If approved, they will lock the country into decades of additional emissions.

3. Biden's proposal to make the U.S. carbon neutral by 2050 is ambitious, but maybe not impossible

His goals for all this are to zero-out carbon pollution from the electricity sector by 2035, and make the entire U.S. economy carbon neutral by 2050.

"In the event of a major technological breakthrough, 2035 is possible," says energy law expert Scott Segal, a partner with Bracewell, whose clients include fossil fuel companies.

Biden's plan relies on technologies that haven't been developed yet, or are not economical, so it includes a lot of money for research and development.

Segal likes that it leaves room for some fossil fuels with carbon offsets and carbon capture, although that's a sore point with progressives. And he says it's smart to include both regulations and incentives to reduce emissions. "It's a sign of a sort of maturity in approaching these issues," he says.

Of course, the plan also calls for Congress to pass a law enforcing those carbon-neutral goals, which raises the next point.

4. A president can only do so much without action from Congress

The Trump administration has rolled back or weakened dozens of environmental regulations, including those on coal plants, toxic chemicals, tailpipe and methane emissions, protections for waterways, and rules around a bedrock law that requires federal agencies to consider the environmental effects of proposed projects.

Now, the big question is how many of these will stick. Many have already been struck down in legal challenges and are being appealed. Some will no doubt end up in the Supreme Court, which is why the confirmation of a sixth conservative justice could affect U.S. climate policy.

A major challenge is that the country's environmental laws are decades old. Climate change was not a pressing public issue when the Clean Air Act was passed, but the Obama administration pushed a legal interpretation that it applies to carbon emissions.

An effective and enduring climate policy will require congressional action, which means Biden would likely need a Democratic-controlled Senate.

5. President Trump's second term would likely be more of the same

But he condemns climate regulations as bad for jobs and the economy, and continues to dismiss the role of climate change in fueling extreme weather. "I don't think science knows, actually," he erroneously told California officials at a recent briefing on record setting wildfires.

Fossil fuel industries have wish lists for a Trump second term. Tom Pyle of the American Energy Alliance wants to overhaul federal offshore oil drilling. He doesn't like drilling bans, like the one Trump recently expanded in a move aimed at Republican led swing states.

"There's too much politics involved in that process," he says. "We should be leasing areas where it makes economic sense to do so, and we shouldn't have these blanket bans."

Pyle also would like to end special tax benefits for solar and wind. And he wants to re-litigate the so-called endangerment finding, a key 2007 Supreme Court decision that allows the EPA to regulate carbon dioxide under the Clean Air Act.

6. The pandemic has brought a new focus on climate justice

"We have 100,000 people dying prematurely from air pollution every year and you're trying to increase that number," says Mustafa Santiago Ali, who left the Environmental Protection Agency after Trump's election and is now with the National Wildlife Federation.

Biden's plan notes that climate change disproportionately hurts low-income communities of color. Among many other things, it calls for supporting climate lawsuits against polluters and targeting 40% of clean energy investments to disadvantaged areas.

Michele Roberts of the Environmental Justice Health Alliance is from Biden's home state of Delaware, and says he was not always an ally. "He was a filibuster for the political economy that was running the great state of Delaware," she says.

But she thinks Biden's views have evolved. If he's elected, she says it will be important to hold him accountable for the promises he's making now.