Accessibility links
Google Paid Apple Billions To Dominate Search On iPhones, Justice Department Says An agreement worth up to $12 billion made Google the de facto choice for online search on millions of iPhones. Justice officials say the deal may be anticompetitive under U.S. law. 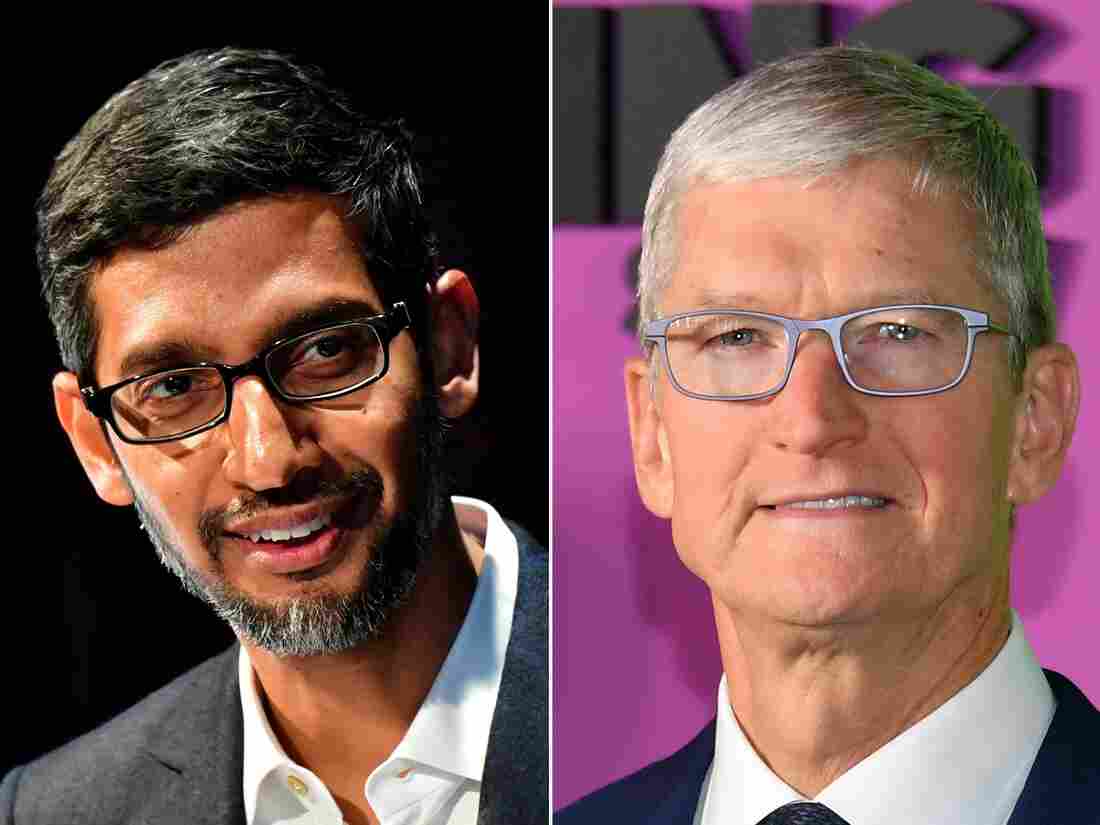 Buried on Page 36 of the Justice Department lawsuit accusing Google of abusing its monopoly power is this remarkable figure: $8 billion to $12 billion.

That's the hefty sum Google allegedly paid Apple for one of the most prized pieces of real estate in the world of online search: default status on iPhones and all other Apple devices.

Clinching default search status on Apple products was a victory of historic proportions for Google.

"That is the window that the majority of commerce takes place on," said longtime Apple analyst Gene Munster. "It's hard to be more coveted than that."

From Google's perch, losing default status on Apple devices was a nightmare scenario that Google insiders dubbed "Code Red," according to the Justice Department's filing.

The sky-high stakes meant that before the agreement was finalized, Apple CEO Tim Cook and Google Chief Executive Sundar Pichai met in private, in 2018, to discuss how the two Silicon Valley powerhouses could collaborate to "drive search revenue growth."

Afterward, a senior Apple employee wrote to a counterpart at Google: "Our vision is to work as if we are one company."

Apple, the most valuable company in the world, derives up to one-fifth of its $260 billion of worldwide income due to its partnership with Google, which commands more than 90% of global online searches, according to the government's submission to the court.

"This isn't classic collusion, where two rivals agree to raise prices and each benefits," said John Newman, a former Justice Department antitrust lawyer who is now a law professor at the University of Miami. "It looks more like one monopolist agreeing with another company to split the monopoly rent."

Analyst Munster had a more generous take: that the deal shows Google playing hardball, not throwing its weight around in an abusive way.

"It reveals the degree that Google is willing to pay for placement and distribution," Munster said. "Google is aggressive in defending this market share."

Justice Department lawyers see the Google-Apple union as something else: a striking example of how Google has allegedly rigged the online search business against any other company looking to enter by becoming so predetermined by design that it's impossible to compete.

"We actually see a very simple and effective solution, which is really making search competition one click away via a search preference menu," said Gabriel Weinberg, DuckDuckGo's CEO and founder. "When you open a new device, the browser, you're given the option to choose your preferred provider."

Weinberg says that because of Google's stranglehold, only about 2% of searches happen on DuckDuckGo. That number could jump to 20% if people had the option of setting DuckDuckGo as the default on phones, he said.

In Europe, when people buy a smartphone with Google's Android software, they are given such an option, a result of Europe's own antitrust probe of U.S. tech giants.

The alternative search engine choices are handed to the three highest bidders, a process that has been criticized by DuckDuckGo, which argues a menu of search engines should not be a "pay to play" arrangement. Instead, DuckDuckGo says consumers should be able to choose whatever Google rival they want, without the company having to pony up big money for the privilege of being an option.

Newman, the former Justice Department lawyer, agrees. He says there should not be barriers to competition in the search business even if people by and large prefer Google.

"If the Yankees keep winning the World Series in a world where baseball's fair, that's no reason not to make baseball fair," Newman said.

Justice Department lawyers have interviewed DuckDuckGo's Weinberg about his view that Google is stifling competition through its smartphone default status, and Justice officials may push a federal judge to order that consumers have more options, if the court eventually rules against Google. Of course, the case is likely to take several years to resolve.

"Search rivals should feel emboldened and view the Justice Department's lawsuit as an opportunity," Munster said. "But they first need to hit a certain threshold in quality."

That mirrors Google's response to the lawsuit. Google says it's successful because its search engine is just better than the rest. And it is not stiff-arming rivals because people can switch their default browsers if they wanted to, Google Senior Vice President of Global Affairs Kent Walker wrote in a blog post.

"Our agreements with Apple and other device makers and carriers are no different from the agreements that many other companies have traditionally used to distribute software," Walker wrote. "Other search engines, including Microsoft's Bing, compete with us for these agreements. And our agreements have passed repeated antitrust reviews."

On the "Code Red" scenario of being dropped as the de facto search engine on Apple devices? Google says it hadn't heard of the phrase before reading it in the Justice Department's lawsuit.