Accessibility links
What Gen Z Latino Voters Want America To Know : Code Switch For the first time in election history, Latinos are projected to be the second-largest voting demographic in the country. The reason? Gen Z Latinx voters, many of whom are casting a ballot for the first time in 2020. So we asked a bunch of them: Who do you plan to vote for? What issues do you care about? And what do you want the rest of the country to know about you? 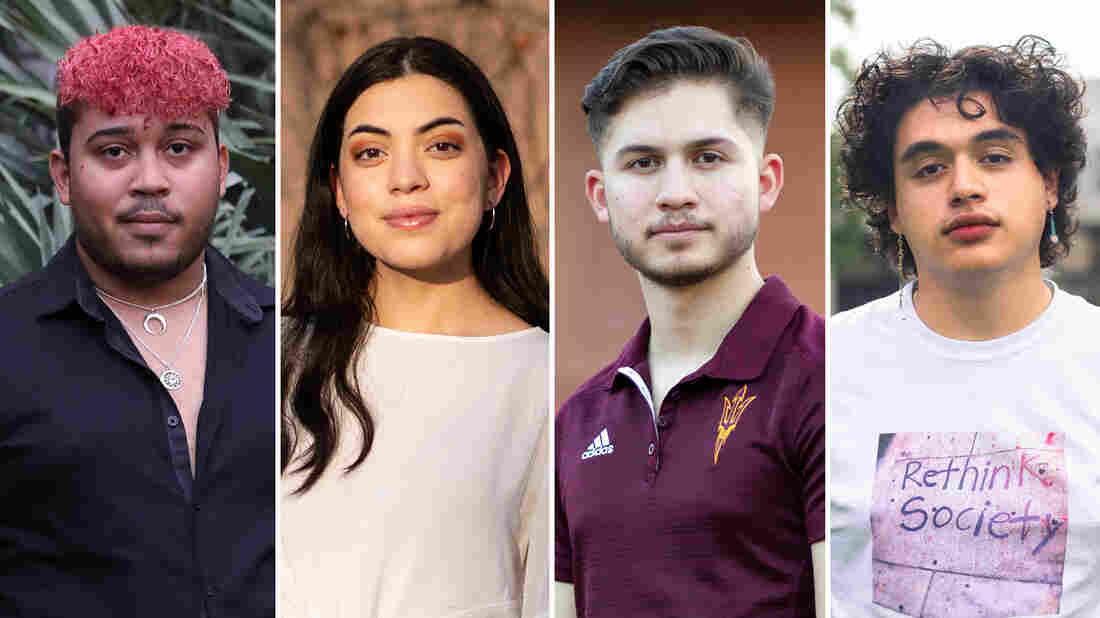 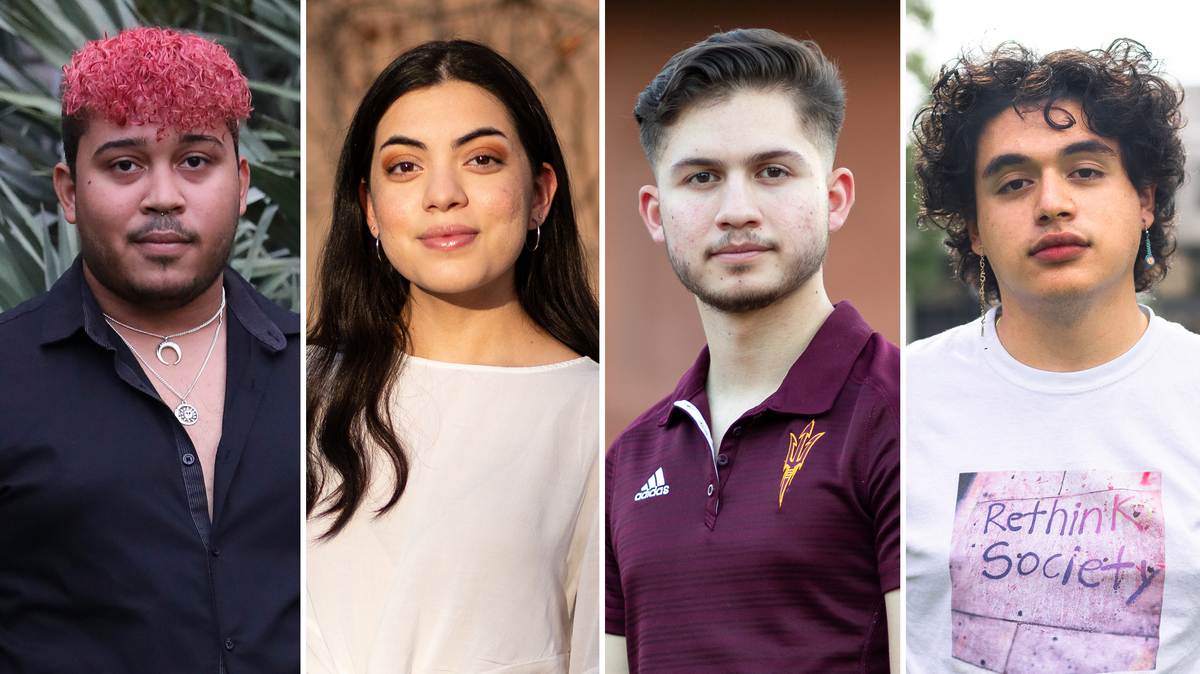 Every election cycle, there's an endless stream of voter demographics stories that trot out the same tropes and truisms: about the "Black vote," the "youth vote," the "women's vote." And true to form, pundits have been making the carbon-copy predictions about the Latinx voters for decades. The bloc, according to them, is a "sleeping giant," unaware of their full electoral power — but this election will be the one where they'll finally turn out in huge numbers. But those predictions are rarely realized; despite their increased presence in the U.S., a little less than half of eligible Latino voters turned out back in 2016, a number well below Black and White ones.

However, those cliches conceal a greater truth: Latinx voters have seldom been taken seriously by electoral politics. Sure, they've been courted by Democrats and Republicans alike — but that often takes the form of Hispandering. (Remember the list of "7 ways Hillary Clinton is just like your abuela"? Or Jeb Bush's ad, in Spanish, celebrating Cinco de Mayo?) And that lack of serious effort has shown. In August, two thirds of Latino voters polled by Latino Decisions said they had not been contacted by either Republicans or Democrats ahead of the 2020 election.

But if there was ever a time to take Latinx voters seriously, it's this year. For the first time, they are projected to be the second-largest voting demographic, trailing only behind non-Hispanic white people. The reason for that? Well, the youth. Every 30 seconds, a Latinx person turns 18 and becomes eligible to vote, according to Census Bureau data. And according to historian Geraldo Cadava, there are a million more eligible Latino voters this election cycle than there were in 2016.

So we wanted to ask these new voters: Who do you plan to vote for? What issues do you care about? And what do you want the rest of the country to know about you?

On this week's episode, you'll hear this new generation of Latinx voters speak for themselves about what's gotten them fired up in 2020. Here's a sampling of what people told us; their responses have been edited and condensed for clarity. 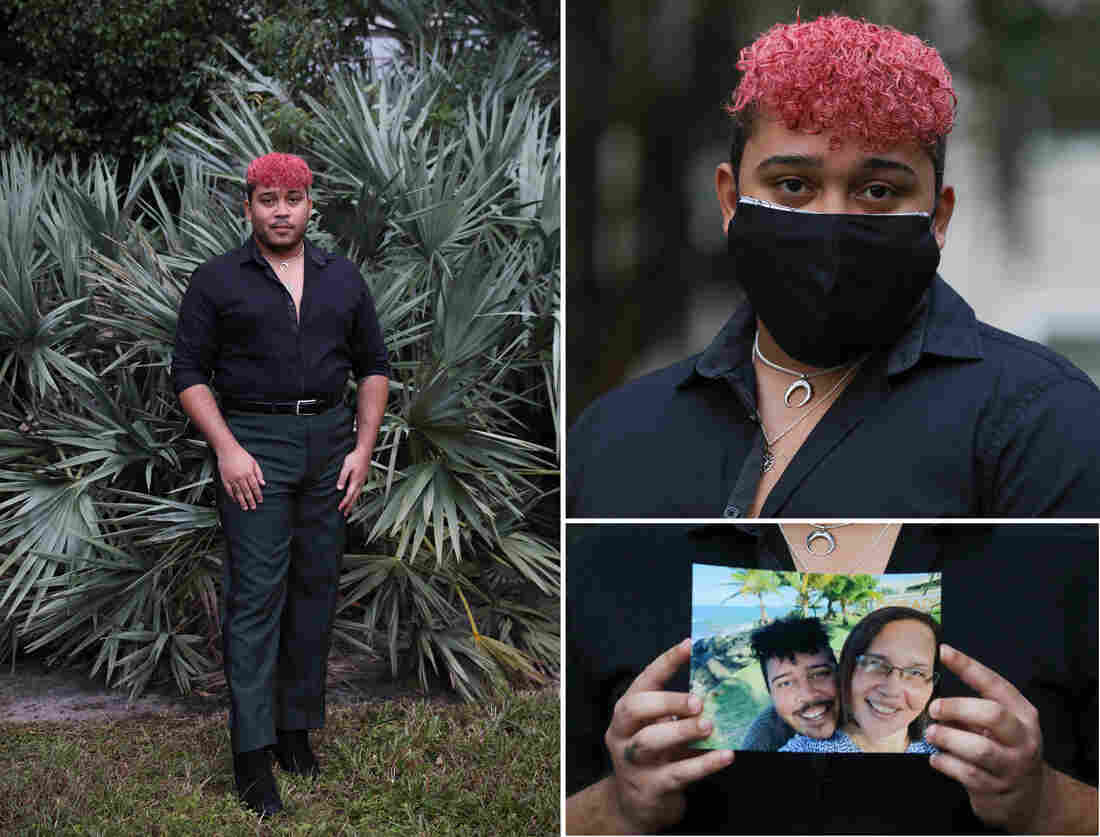 Victor Samuel Martinez-Rivera, 23, is from Toa Baja, Puerto Rico, but has been living in Orlando, Fla. since Hurricane Maria hit the island. Since Puerto Ricans can't vote for president, this is his first time voting in a general election. Eve Edelheit for NPR hide caption

Most of these voters experienced their political awakening after the 2016 election and during the Trump administration.

"I remember in the eighth grade when Donald Trump first had his announcement that he was running for president. I had never heard of him or seen him before in my life. And so I was like, Who is this dude? I was surprised that someone could just outright say the things that he said, targeted towards Mexicans specifically. The assumptions that I already had about Republicans were that they were racist, but I had never actually seen flat-out racism like that, unapologetic, that they weren't hiding the fact that they're racist." -Alanisse Pineda, 18; Chicago, Ill.

"I think I was 14, so I was just starting high school. I remember feeling very surprised by the outcome. I remember reading some news articles and watching the news and seeing that Hillary had actually won by popular vote. But then the actual outcome was Trump became president. And I was like, how? How did the system become so messed up that the people haven't been represented? I think that's something that sparked my interest in politics right now and just in organizing and volunteering, and how I am working today to ensure that doesn't happen." -Laura Hermosillo, 18; Tucson, Ariz.

"Being a freshman in high school was very scary, because my parents are immigrants from Mexico. And just seeing how my community reacted to Trump and Mike Pence being inaugurated really set forth me becoming educated in what stances I believe in." -Leslie Gomez, 18; Kinderhook, N.Y.

Some have struggled with how to cast their ballot.

"The only information that I know [about the two candidates] is based on what people have told me, and basically I've heard that both options aren't the best. With Trump, for example, there's a lot of racism on his side. And as for Biden — well, I'm a Christian, and so I've heard that he's for same sex marriages and all that, and we're supposed to be against that. But I'm just not too sure where I would want to place my vote." -Andrea Torres, 19; Prescott Valley, Ariz. 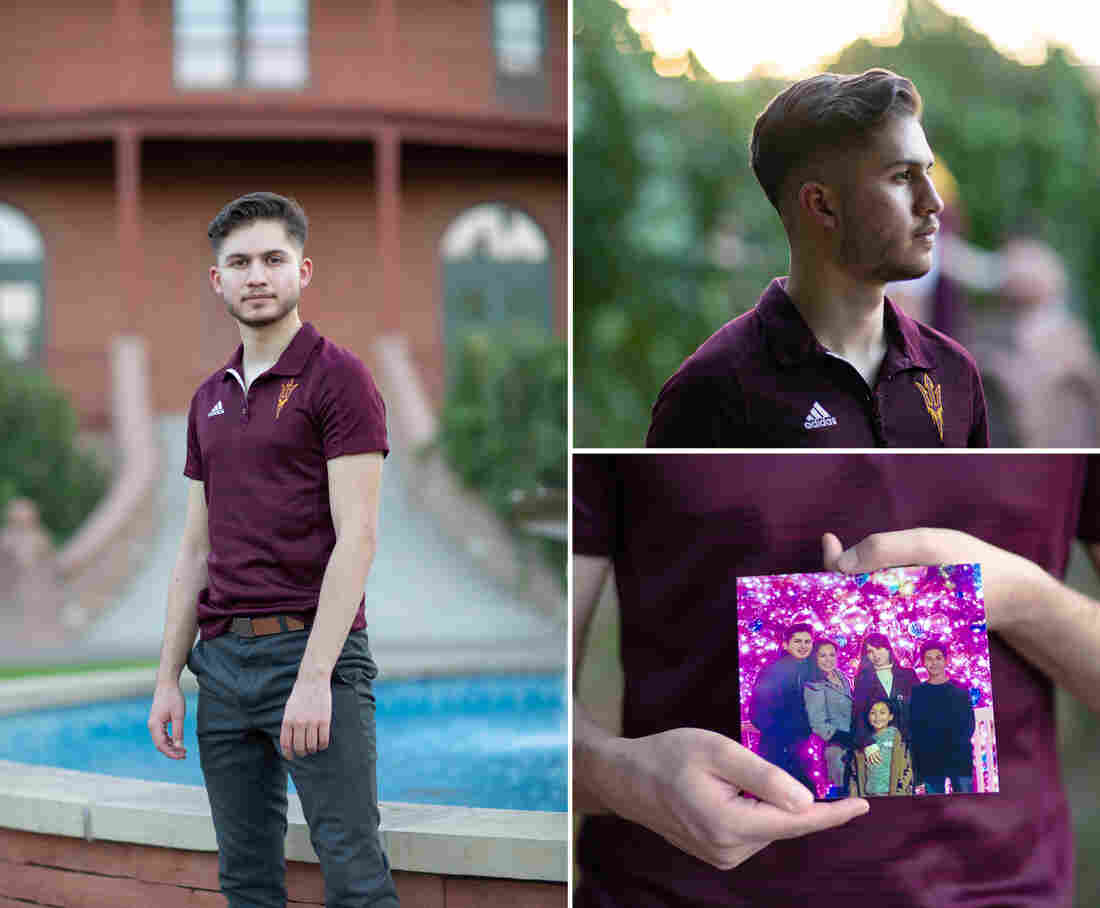 Heber Toscano, 19, was born in El Paso, Tx., but spend a lot of time right across the border in Juarez. His time in Mexico shaped his now-conservative politics and vote for Donald Trump: "I never really speak of my political views because I know they're controversial, and because it's something personal to me, because of what I've lived through." Deanna Dent for NPR hide caption

Their families' experiences have had a big impact on their politics.

"My dad is from Mexico and my mom is from Guatemala, and they were fortunate because they were able to become citizens. But it wasn't that easy for a lot of people, and it isn't easy for a lot of people. And so immigration is definitely a huge issue. This is as well as education. Me being from Arizona, we're not really the best in education here, and I feel like there's a lot that could be done to improve the education system and improve funding." -Donna Prado, 18; Phoenix, Ariz., volunteering with the Arizona Center for Empowerment

"[I'm voting for Trump] because he keeps the government away from our affairs. I know what a failed government looks like in Mexico. The government in Mexico has really, really failed their people and I got to see that. Even the police in Juarez were really corrupt and paid by the cartels themselves. Over there, you just don't trust the government." -Heber Toscano, 19; Tempe, Ariz. 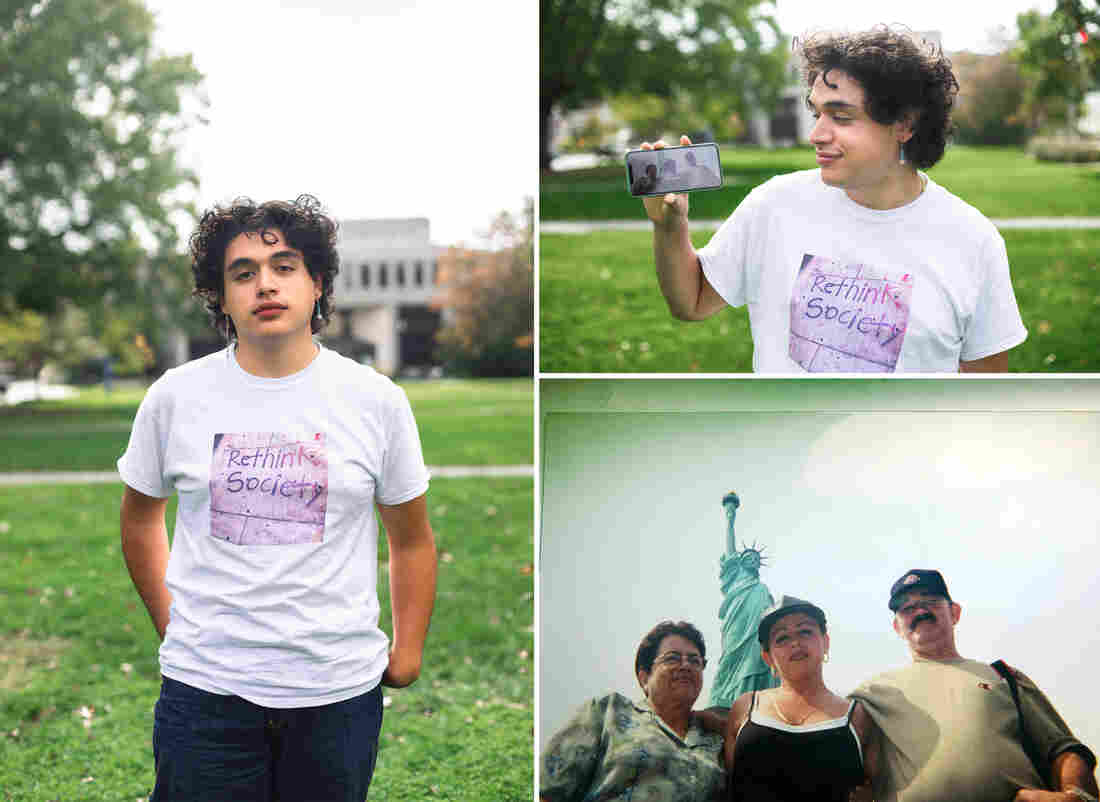 Alejandro Vazquez, 19, voted early for the Green Party candidate for president, Howie Hawkins. "I think people are doing a terrible job of getting young people to vote because they are trying to fit us in their system that is inherently against a radical teenager's thought," he said. Xueying Chang/NPR hide caption

They've thought hard about the perception that young people don't care about voting.

"I think people are doing a terrible job of getting young people to vote, because they are trying to fit us in their system that is inherently against a radical teenager's thought. Like, I don't want to support this person that voted for the 1994 crime bill. And, then people are like, 'Why aren't young people voting?' It's because politics is terrible in the U.S.! If youth were actually taught the actual history of the U.S., young people would be political." -Alejandro Vaszquez, 18; Norwalk, Conn.

"I know a lot of people and they're frustrated because it's like the 2016 election. It's like, oh, we had two terrible options, and now we have another two terrible options. I was actually talking about this with my friends just the other day, like, 'How do we have two rich white men that are older than 70 years old [as candidates]?'

"When we talk to people who are not wanting to vote, it's frustrating. Because it's like, could I have said something else? Could I have approached it a different way? But there's only so much you can do. Whether they exercise their right or not is up to them." -Alexa Franco, 19; Phoenix, Ariz.; volunteering with Living United For Change In Arizona (L.U.C.H.A.). 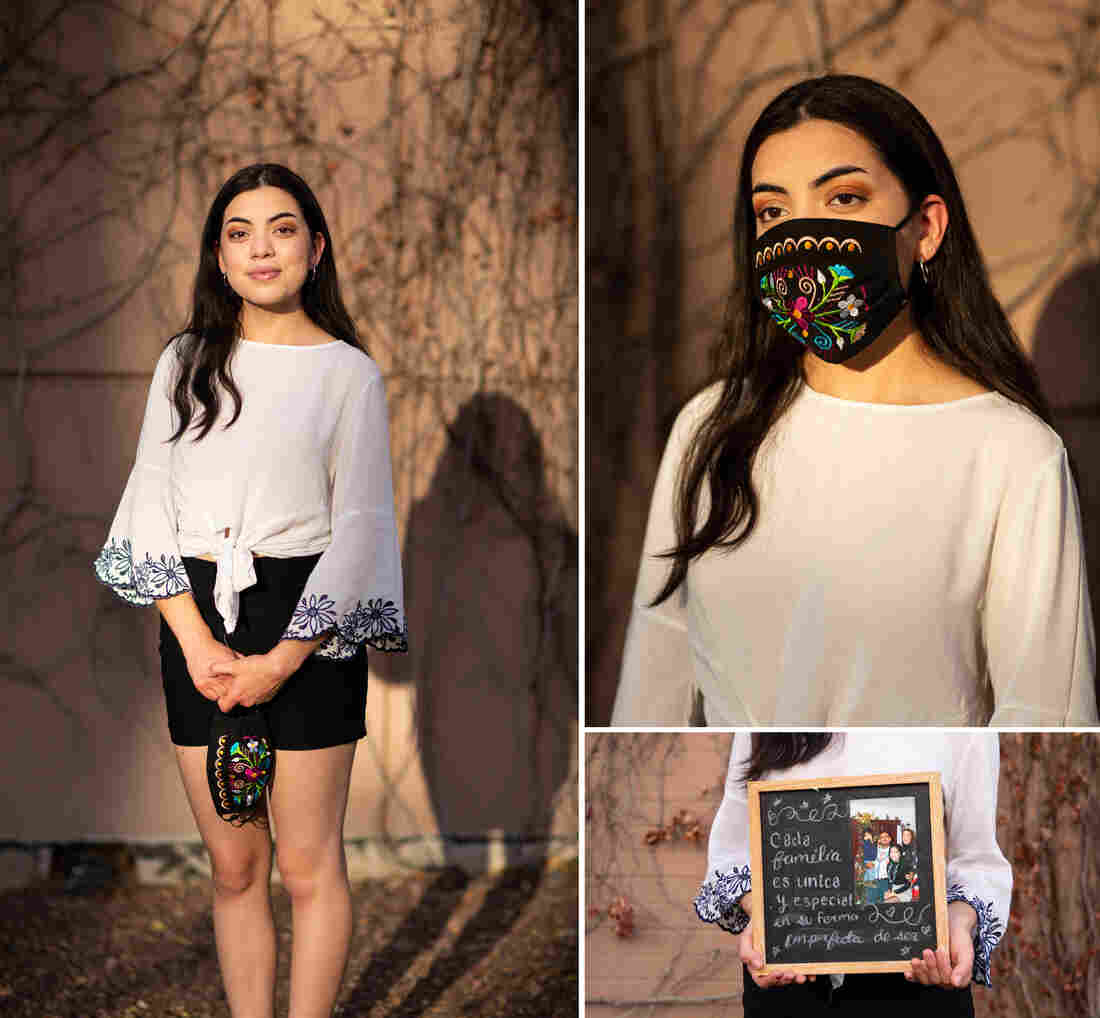 Fernanda Ruiz Martinez, 19, has been helping get out the vote in her community in Phoenix, Ariz. since high school. "I'm trying to emphasize to them how important it is to vote in the local elections," she said. Deanna Dent for NPR hide caption

They view their vote as something that can help their communities and families.

"A majority of my family can't even vote, and I think that's a very unique position to be in. Because with my friends who are also Hispanic and who are first generation, it's sort of like, my parents can't vote, but I can." -Alanisse P.

"I think it's a great opportunity that my voice is going to be heard and to be able to represent my family. Immigration laws separated my family from me and my sister, so I at least want the president to understand the situation and improve it. And I think climate change could affect poor communities, and I'm from a poor community, so I want that to improve."-Fernando Camarillo Gutierrez, 18; Brooklyn, N.Y.

"We're tired of being tired. So voting is something that we understand holds more significance to us, especially considering that our ancestors and the people who came before us in this country were fighting for our right to vote and to not be intimidated at the polls." -Alexa F.

And they don't want the media's attention on their community to only come around every four years, either.

"Sometimes I just feel like they are aware that we are important, but at the end of the day we are not going to get the respect that we deserve. After the elections, they are just going to portray us with stereotypes, and they are just going to forget about writing stories that actually reflect who we are. It's a lot of research, you know. You have to learn more about our culture. You have to learn about our history." -Fernanda Ruiz, 19; Phoenix, Ariz.