Accessibility links
Goldman Execs To Pay Back $174 Million In Compensation Over Bribery Scandal The blue chip bank will claw back hundreds of millions of dollars in compensation from current and former executives over a financial scandal in Malaysia. 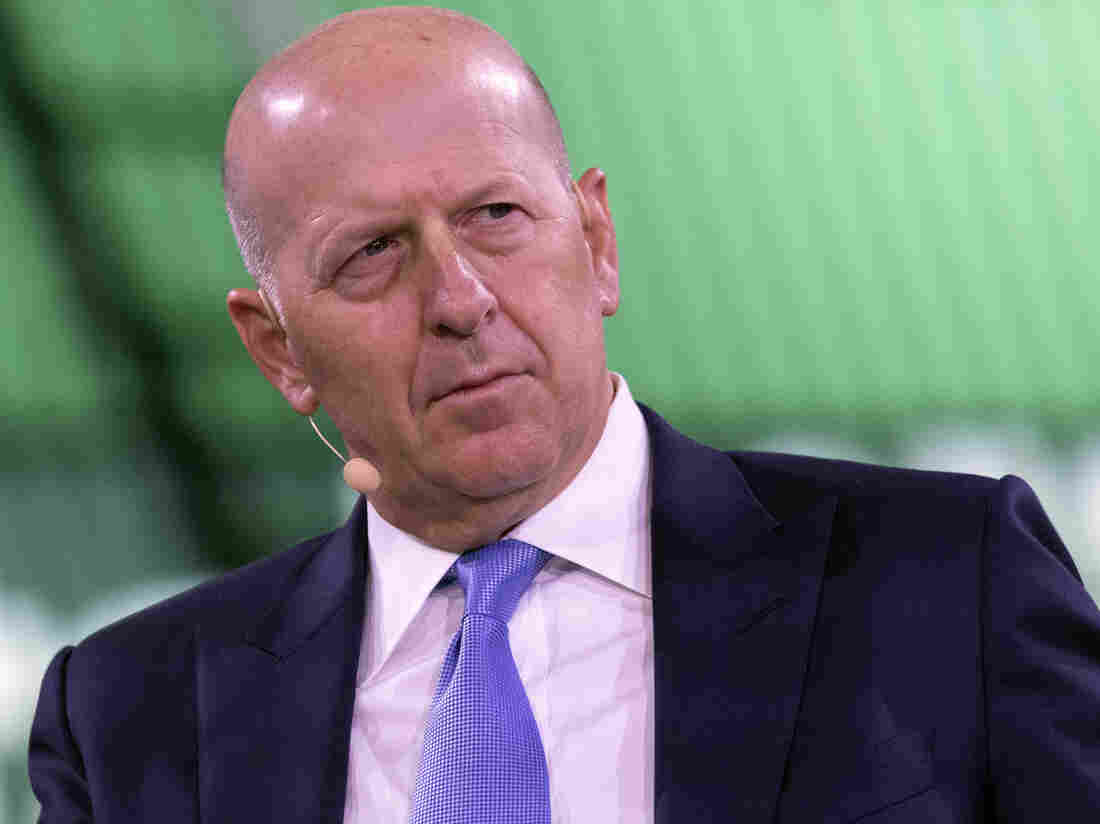 David Solomon, chairman and CEO of Goldman Sachs, shown here at a business roundtable in New York last year, is among several executives at the bank who will have to give back part of their pay.

Nine current or former Goldman Sachs executives, including CEO David Solomon, will have to pay back hundreds of millions of dollars in compensation over a bribery scandal in Malaysia.

Goldman has faced regulatory probes in the United States and Malaysia over allegations that it enabled billions of dollars to be siphoned off from a Malaysian development fund and over bribes paid to government officials. The scandal that ensued led to the resignation of the Asian country's prime minister.

Besides Solomon, the executives who will return part of their bonuses include former CEO Lloyd Blankfein, who presided over the bank when the scandal took place, as well as the former chief operating officer and chief financial officer.

Altogether, the executives will have to forfeit or return about $174 million, the bank said

U.S. officials also announced that the bank will pay a fine of about $2.8 billion, in addition to $2.5 billion it must pay to the Malaysian government. The blue-chip bank posted a quarterly profit of $3.6 billion in the July-September period.

"This action is entirely appropriate under the circumstances," Goldman Sachs's board said in a statement that announced the action taken against executives while also addressing the regulatory settlements. "The Board's announcement is an important reminder that we are all responsible for each other's actions, including our collective failures."

Goldman pleaded guilty to conspiracy in a Brooklyn federal court on Thursday, acknowledging that its Malaysian subsidiary knowingly violated the Foreign Corrupt Practices Act. Employees at Goldman's subsidiary helped raise $6.5 billion for the 1MDB investment fund in 2012 and 2013.

Much of the money was later looted by Malaysian government officials and their associates, with the assistance of the Goldman bankers, Timothy Leissner, and Roger Ng, according to U.S. officials. Leissner has pleaded guilty, while Ng maintains his innocence and will go to trial in March.

It's Nice To Be Rich: Wall Street Is Raking In Profits In The Stock Market

Under the terms of the deal with the Justice Department, Goldman will admit wrongdoing but will avoid prosecution.

The deal marks an acknowledgement by Goldman that it fostered a culture where wrongdoing was tolerated and senior management overlooked red flags.