Accessibility links
Electronic musician, Tom Fec of Tobacco and Black Moth Super Rainbow : Bullseye with Jesse Thorn This week we are revisiting our conversation with musician Tom Fec, better known by his stage name, Tobacco. His latest album, Hot Wet & Sassy comes out at the end of October. Tom joined Jesse last year to talk about his musical influences, his creative process, and why he rejects the label of psychedelic rock. Plus he tells us why you'll occasionally find him and his bandmates in Black Moth Super Rainbow performing concerts in masks. 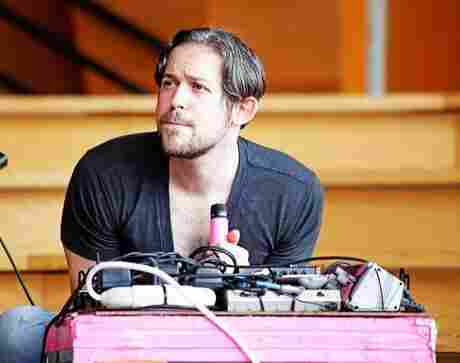 Electronic musician, Tom Fec concedes that his music can be a little unsettling. But he swears that's not his intention. He says that he doesn't want to make his audience uncomfortable, but he is interested in shaking them up.

If you've ever heard his music, either as the solo artist Tobacco, or in any of his collaborative projects like Black Moth Super Rainbow or Malibu Ken you'll know what he means. The music is characterized by lots of synth, distorted vocals, layered electronic sounds like laser effects and drum pads. It's kind of dark and dirty synth pop. If you've seen HBO's Silicon Valley then you've heard some of his stuff – his track Stretch Your Face is featured as the show's theme song.

Like a lot of musicians he started off making music with guitar given to him. He switched to using a cheap monosynth pretty quickly. Tobacco says he was experimenting with trying to make his version of the music he loved through simple trial and error. You can hear the influence of bands like Aphex Twins and Boards of Canada in his music today.