Accessibility links
StoryCorps: Finding Support On Road From Prison To Law School Bob VanSumeren served nearly six years in prison for robbery. But Mike McKenney, his ex-girlfriend's dad, never gave up on him. "Your visits kept me from sinking fully into prison," VanSumeren said. 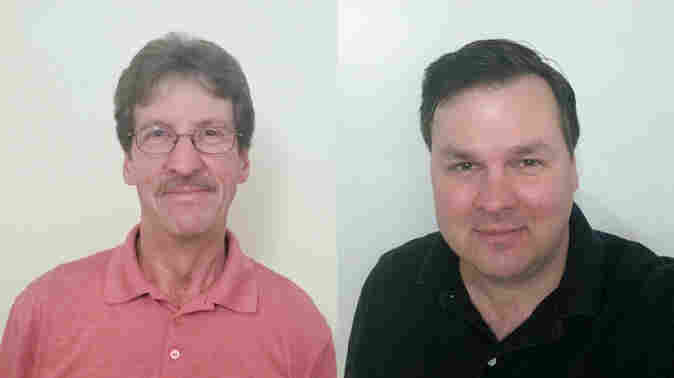 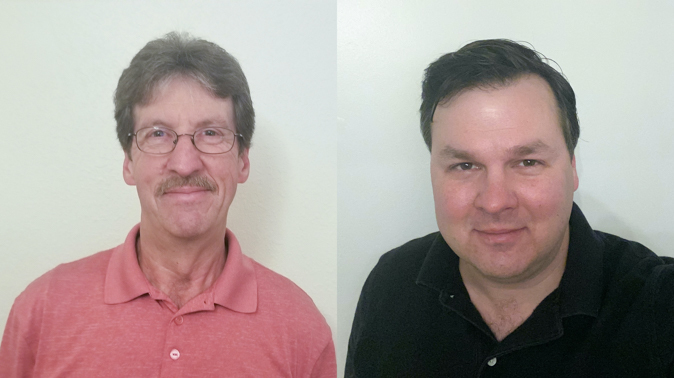 In a StoryCorps interview this month, Bob VanSumeren (right) described how Mike McKenney's support helped him turn his life around — from felon to lawyer.

Courtesy of Mike McKenney and Bob VanSumeren for StoryCorps

During the 1990s, in the tiny town of Parma, Mich., Bob VanSumeren lost his way.

He dropped out of high school and started abusing drugs and alcohol. When VanSumeren turned 18, his parents got a divorce, and he became essentially homeless, mostly couch-surfing at friends' houses. It was around this time that he and his high school sweetheart, Jillian, broke up. VanSumeren had fallen in with the wrong crowd.

Eventually, he robbed a gas station and a bank. He served nearly six years in prison for those crimes.

But there were two people who never gave up on him: Jillian's parents, Mike and Becky McKenney.

VanSumeren, now 41, spoke with Mike McKenney, 65, for a remote StoryCorps interview last week, looking back on how, with the McKenneys' support, he turned his life around and became a lawyer.

Not long after VanSumeren entered prison in 1999, the McKenneys and their daughter began writing and visiting him.

"Why did you reach out to me after I was arrested?" VanSumeren asked Mike McKenney.

"Well, we just couldn't let you do it alone," McKenney told him.

They remained his most consistent support, visiting him nearly once a month during his incarceration.

"Your visits kept me from sinking fully into prison," VanSumeren said. "They were like coming up out of the bottomless pit for a minute."

Mike and Becky McKenney's visits became less frequent when VanSumeren was transferred to a facility in northern Michigan, about a 10-hour drive from the couple.

Mike McKenney recalled crossing a bridge on a foggy drive home after one of those visits. It struck him as symbolic.

"I don't know if I have ever seen fog as thick as that. It was like a wall on each side of the bridge," he said. "When we got to the other side, it was like, changed from one world to the next. And I thought, 'When Bob gets to the other side, he's going to be OK.' And you were."

When VanSumeren was released in 2005, the McKenneys picked him up and took him to Denny's for his first meal since leaving prison.

"Everybody ordered, and when your turn came, it was like you froze. You couldn't order anything," Mike McKenney said. "You had not been given a choice for six years. All of a sudden to have this freedom, what do you do with it?"

It was a lot to take in at once, VanSumeren remembered.

"It feels like the world is just coming rushing at you like a freight train," he said.

After his release, VanSumeren lived with the McKenneys. They helped him transition back to the real world from prison, encouraging him to pursue a college education and, eventually, law school. 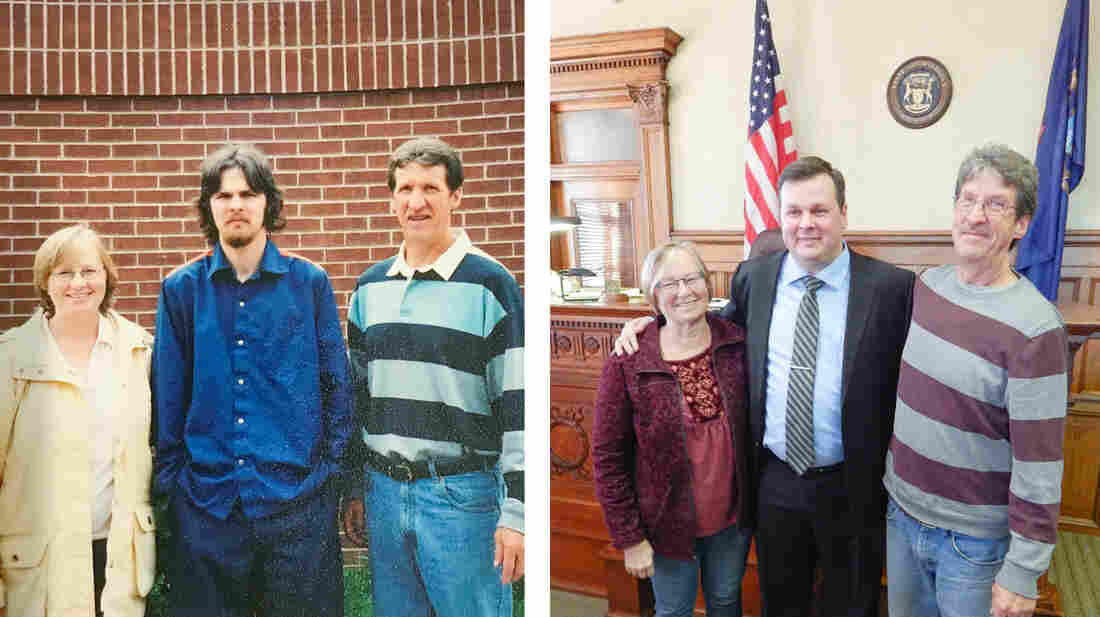 At left: Becky and Mike McKenney (right) visit VanSumeren while he was incarcerated. The couple are the parents of VanSumeren's former girlfriend, Jillian, who has also remained close to him. At right: The McKenneys join VanSumeren on the day of his swearing-in as a lawyer. Courtesy of Bob VanSumeren hide caption 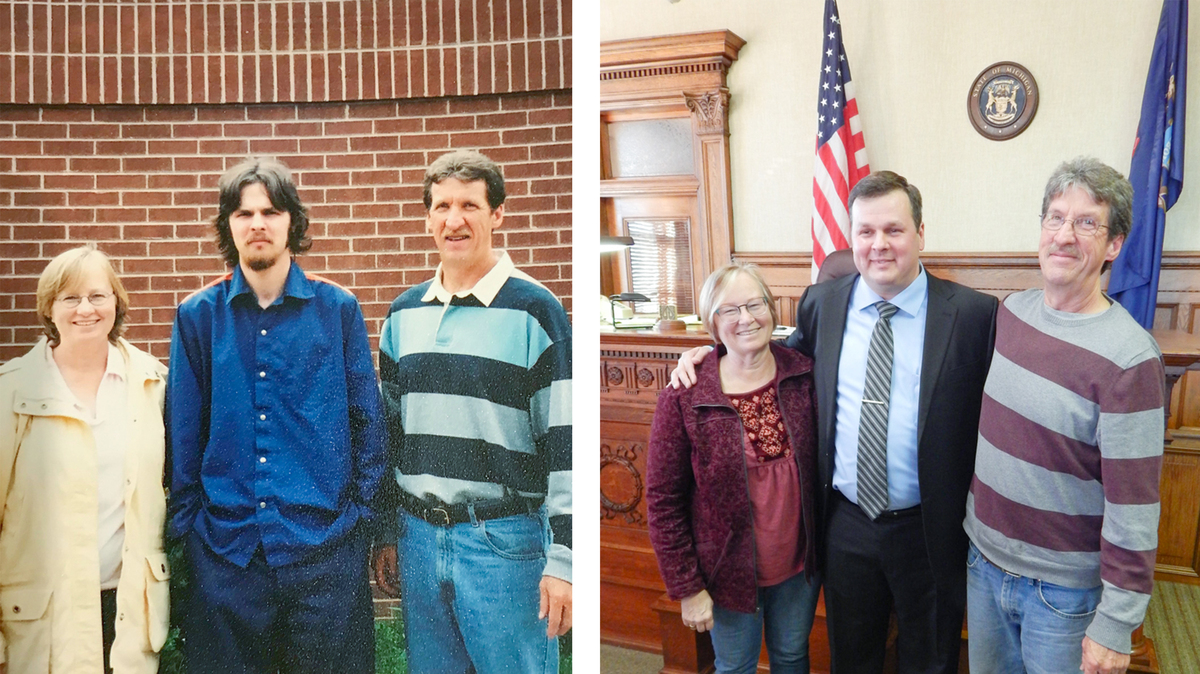 At left: Becky and Mike McKenney (right) visit VanSumeren while he was incarcerated. The couple are the parents of VanSumeren's former girlfriend, Jillian, who has also remained close to him. At right: The McKenneys join VanSumeren on the day of his swearing-in as a lawyer.

"You guys helped me learn I'm OK, I can join the humans," he said. "And then you started talking to me about college. No one else had expected that from me."

In November, VanSumeren was sworn in as a lawyer by the same judge that sentenced him after making a request for that judge to preside over the ceremony.

"I remember how proud we were of you when you were being sworn in," McKenney said. "Do you think about Bob as a felon anymore? Or do you think [of] Bob as the lawyer — or how do you think of yourself?"

" 'Bob the licensed attorney' has been quite a counterweight to it," VanSumeren said. "But, yeah, the two felonies — they're still very strong. I've never run away, I don't think, from my story. The past, the felonies, the prison, that's a part of it. I just hope eventually that I do other things to matter more. I don't want my gravestone to say: The ex-felon who became a lawyer," he joked.

"Well, there's going to be a lot more to it than that," McKenney told him.

Audio produced for Morning Edition by Jey Born. NPR's Emma Bowman adapted it for the Web.