Accessibility links
15 Years On, The Lonely Legacy Of 'Shadow Of The Colossus' Fumito Ueda's moody video game about a young hero wandering a landscape empty of everything except for 16 towering giants originally came out in 2005 — but its loneliness speaks to today's gamers. 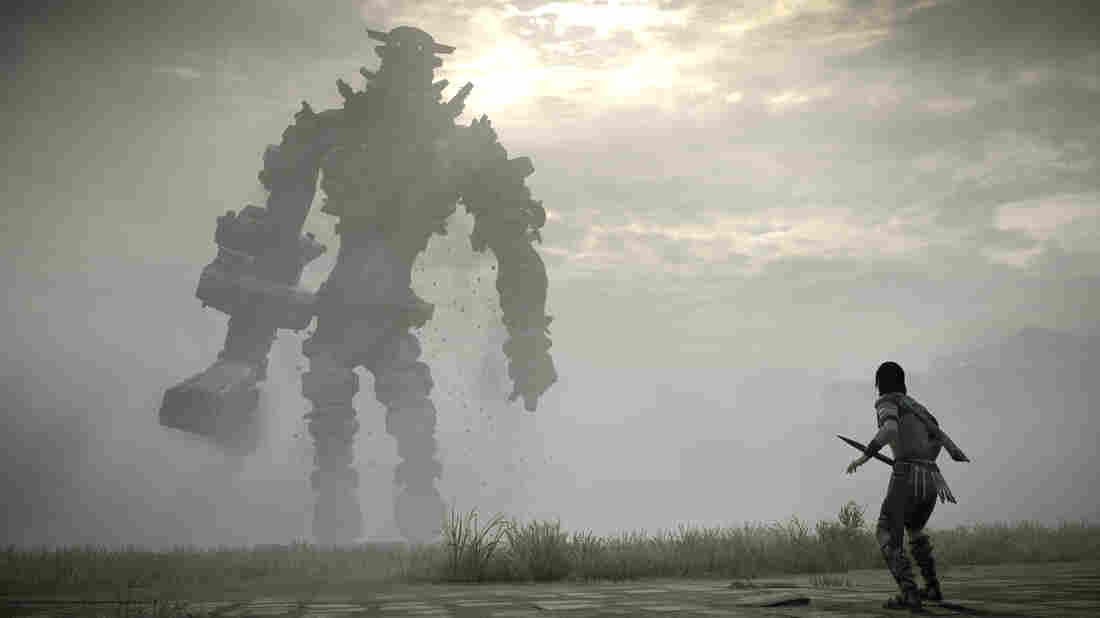 This image from the 2018 remake of Shadow of the Colossus emphasizes the lonely nature of its landscape. Soin Interactive Entertainment hide caption 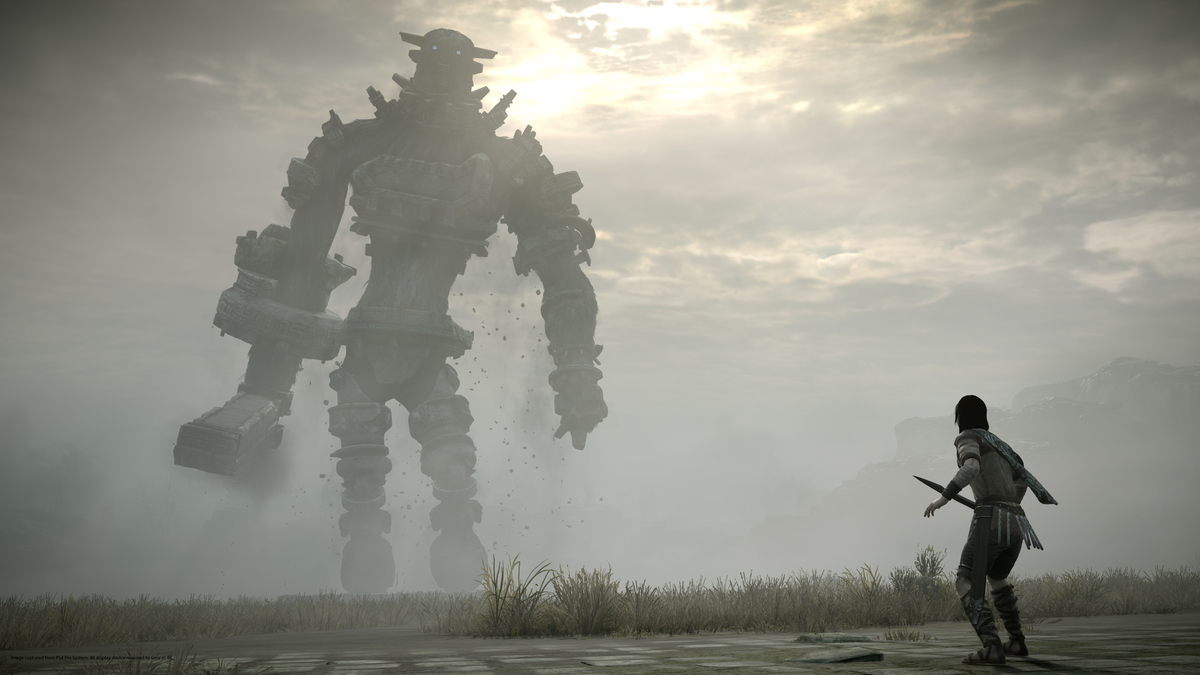 This image from the 2018 remake of Shadow of the Colossus emphasizes the lonely nature of its landscape.

The first time the player is given control of Wander, the young and androgynous-looking protagonist of Shadow of the Colossus, they are confronted with a vast and unfamiliar landscape bathed in a cold yellow sun. Towering cliffs lie in the distance, while a rocky ridge cuts through the scrubby middle-ground. New players won't know it yet, but this place, referred to as the Forbidden Lands, is empty — except for 16 towering giants and a smattering of wildlife. Over the course of the next ten hours, they will empty it further, slowly felling each of the colossi as part of a mystical pact to revive a lifeless young woman. Death becomes life, but the world here is left a little quieter.

Shadow of the Colossus is the second of three melancholic video games directed by acclaimed Japanese game maker Fumito Ueda. It's rare to find such quiet sadness in a video game, even rarer in a trio. Ueda's first, 2001's Ico, told the story of a young boy trying to help a child princess called Yorda escape from a magical ruinous castle. His third, 2016's The Last Guardian, focused on the relationship between another pre-pubescent protagonist and a giant creature called Trico. Sandwiched between these two games is the notably darker Shadow of the Colossus, what Ueda described as his "own take on cruelty," a rumination on the violent actions many games ask players to perpetuate.

In the 15 years since Shadow of the Colossus was released to near-unanimous praise, its reputation has only grown. At the time, Gamespot described it as a "high-concept adventure unlike any other." When an entirely remade version of the game featuring modern high-definition graphics arrived in 2018, The Guardian affirmed that it was still a "work of extraordinary beauty and quiet profundity." There's a mythic quality to the stark game world, one with enough latitude for players to project their own meaning. During this weird pandemic-inflected time, I've noticed new and uncanny resonances of the virtual within the real from my home in Scotland. It isn't just that the game's rolling vistas share a similarity with the Hebridean islands a few hours to my West; it's that Shadow of the Colossus is a game in which time appears to have stood still, architecture is filled not with people but an eerie, absent atmosphere, and a sense of dread rolls through the world like the in-game mist.

Each time the player sets out to find a colossus, they must contend not only with orientation but the deafening quietness of their surroundings; often, the only thing they'll hear is the whistling wind as thoughts rattle through their brain.

At its heart, Shadow of the Colossus is a third-person action adventure — the player controls an avatar which sits in the center of the screen and the 3D space. Navigation is key, and as the player ventures deeper into the Forbidden Lands — through deserts, lakes, and forests — well-worn tropes of the genre are notably missing. For a start, the only enemies in the game are the 16 colossi. In other games, smaller enemies and challenges would present themselves, but there is nothing else here, save for the mammoth boss fights. Each time the player sets out to find a colossus, they must contend not only with orientation but the deafening quietness of their surroundings; often, the only thing they'll hear is the whistling wind as thoughts rattle through their brain.

"So many parts of nature are recreated in what feels like a very intentional way to give you these evocative feelings that fill the space between fighting the colossi," says Nick Suttner, author of a 2015 monograph on the game. "Any other designer would have been tempted to fill that space with things to do." Suttner describes Ueda as an "intuitive designer," one who follows their own instincts and preferences. One example is the Japanese game maker's dislike of games featuring "too many stats and numbers." Acutely observed ecological phenomena and deft character animations tell the player everything they need to know; there is no numerical feedback except for one gauge indicating the player's stamina. This results in a work players feel their way through rather than game — in 2005, this was radical.

When Shadow of the Colossus came out, most players would have sat alone, hunched in front of bulky television sets, their eyes filled with the flickering artificial light of its beautiful naturalistic world. In the middle of the noughties, that was me, marvelling at the game on a Friday night when my more outgoing school friends were sitting in a park drinking beer. I, like millions of others, was probably more isolated than I knew, a condition likely exacerbated by this mostly solo hobby. Loneliness, of the kind which has become common in the digital age, wasn't really discussed in the West at the time — but in Japan, there was a term for hermit-like teenagers and twenty-somethings who had swapped the real world for the internet and video games: They were called hikikomori, roughly translating as "one who shuts himself away and becomes socially withdrawn."

Various factors contributed to the rise of the hikikomori. The 1990s, known as the "lost decade" (later revised to encompass the 2000s — referred to collectively as the "lost score"), were a period of economic stagnation, falling wages, and dwindling job opportunities in Japan. At the same time, rapidly advancing consumer technology such as Sony's PlayStation consoles and home computers offered an escape and respite from such realities. Parallels exist elsewhere in the world — including the U..S, a nation experiencing its own loneliness epidemic, which coronavirus has arguably intensified. People are spending more time indoors, limiting their social contact, and funneling their cultural experiences through home entertainment technology. Shadow of the Colossus appears in tune with these processes, an ode to feeling both out of place and out of time, and a metaphor for what it means to be unmoored.

It's this aspect of the game that Robin Hunicke, professor of game design at the University of California, Santa Cruz, and producer for the wistful, Ueda-indebted 2012 adventure Journey, encourages her students to consider, even though many of them would have been too young to play the game when it was first released. Compared to popular Gen Z multiplayer titles such as Roblox and Fortnite, Ueda's game notably lacks a social dynamic, at least with other players. "There are themes not just of connection but a loneliness which stems from not belonging — the feeling of not being part of society," she says. "There's a sense of being cast away from the tribe and the sense of a tribe moving in a different direction from you."

Now, at a moment when distance has cropped up between all of us ... these games are even more poignant — virtual expressions of a loneliness which grips so many lives in the modern world.

For players detached from the actual world, Shadow of the Colossus presents the perfect avatar — a small, literally overwhelmed character attempting to grapple with looming, seemingly insurmountable forces they cannot fully understand.

Ueda's epic could almost be interpreted as a nerdish fantasy in its romanticization of loneliness, appearing to gesture towards the grace and virtue of solitary pursuits. But this doesn't tell the whole story; there is a bigger tragedy at the heart of the game. Despite its desolate environment, Shadow of the Colossus is about connection — between Wander and his horse, the lifeless girl, and even the colossi. Connection, however, remains just out of reach. Despite their clear bond, Wander can never truly communicate with his steed, nor will he ultimately experience the presence of the girl he is trying to resuscitate. The colossi, too, are unknowable. Now, at a moment when distance has cropped up between all of us, not just between families and friends but societally, these games are even more poignant — virtual expressions of a loneliness which grips so many lives in the modern world.

Despite its acclaim, few mainstream video games in the following years built upon the minimalist foundations laid by Shadow of the Colossus. Open worlds got bigger but also busier, featuring an endless checklist of objectives, waypoints, and collectibles — cluttered environments which recall the noisiness of modern social media. 2019's Death Stranding is arguably the truest inheritor, relaying a story of physical distance in a beautiful albeit bruised post-apocalyptic world. What it lacks is the moral ambiguity which drives home the isolation of Ueda's game. As players uncover and kill each of the colossi in the Forbidden Lands, what Suttner describes as a "murderous goose chase," they will likely reckon with the consequences of their actions — I know I did — the series of masochistic acts eventually turning inwards on the player.

Perhaps this is what elevates Shadow of the Colossus 15 years on; many play video games because they offer a break from the injustices of the real world — these works run on mathematical code with promises of fairness and order. But the rules, structure, and narrative of Shadow of the Colossus conspire against the player from the start; the game is rigged, and it's within these circumstances they must find their own meaning and, perhaps, even peace. Ultimately, this feels like the challenge many of us now face as our own behavior is shaped by forces outside of our control. We navigate this new and unfamiliar world alone in front of a computer screen, our eyes filled with its cold blue light.

Lewis Gordon is a journalist and writer based in Glasgow. He writes about culture, technology, and the environment, and has previously written for Vice, The Verge, The Nation, and others.