Accessibility links
Review: 'Bad Hair' From Justin Simien Mixes Horror And Comedy Justin Simien's horror-comedy gets tangled in its own mythmaking, but as an '80s workplace comedy period piece, it's spot-on. 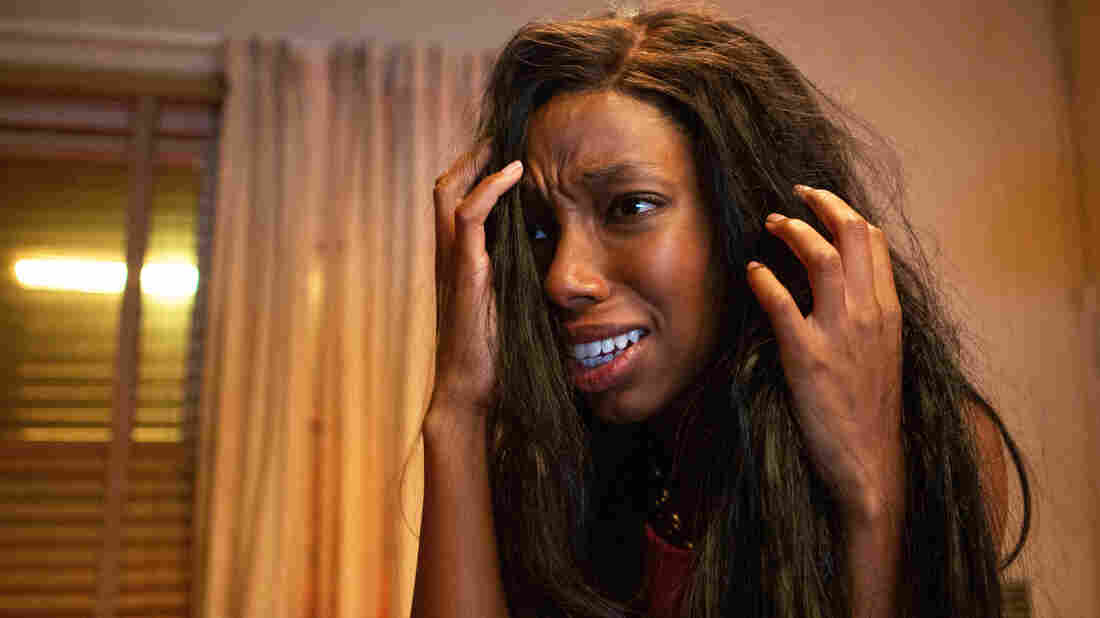 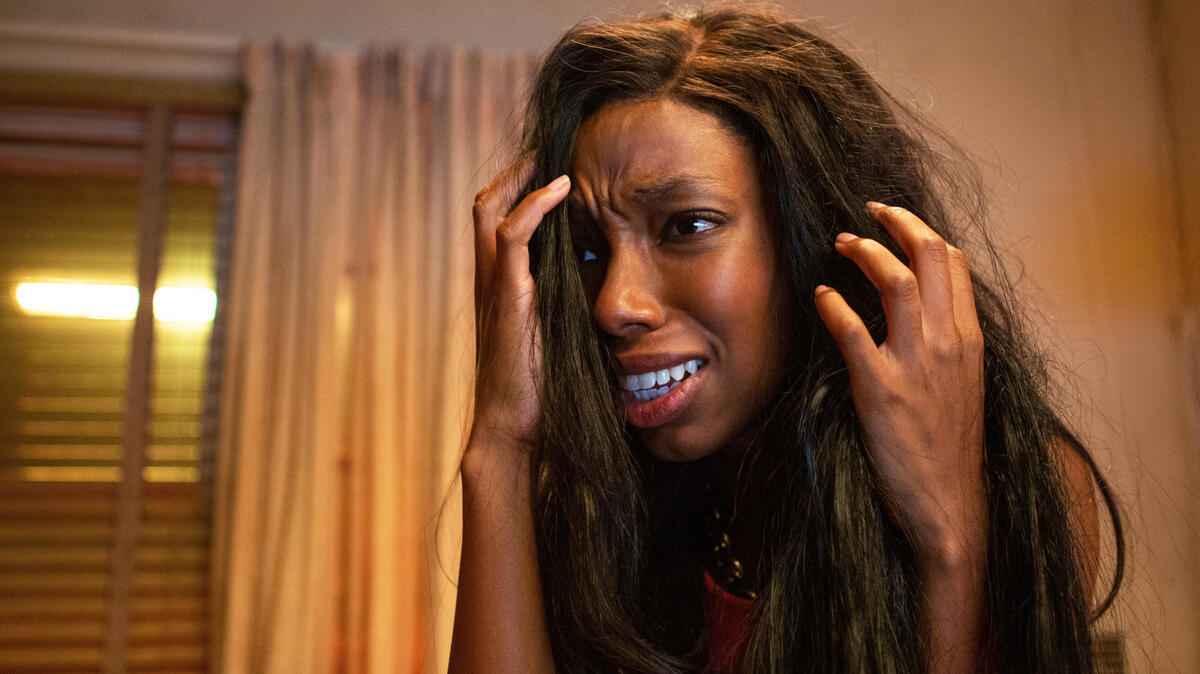 Elle Lorraine plays a woman whose hair has a mind of its own in Justin Simien's new horror-comedy.

In the Hulu horror-comedy Bad Hair, a black woman's weave is more than just a weave. It's a status symbol. It's the key to a promotion. It's ... possessed by an evil spirit intent on sowing chaos?

Likewise, Bad Hair itself is more than a social satire. It's a visual and thematic pastiche of movies like The Fly and Rosemary's Baby. It's a loving sendup of black American pop music in the 1980s. It's a workplace comedy.

It's ... a lot, though (mostly) enjoyably so. As a general rule, writer-director Justin Simien is a bold and ambitious filmmaker whose works practically scream "Go big or go home!" There is never one single perspective, cultural reference, or homage; there are many. In his 2014 feature debut Dear White People, a colorful satire about black millennial anxieties on a predominantly white college campus, he channeled Spike Lee, Wes Anderson and Robert Townsend while tackling colorism, racism, sexuality and microaggressions, for starters. The result was a film that was admirably big on ideas and a vision, but failed to connect all the various dots and stick the landing. (Given more time and space to expand on character development, his Netflix series adaptation of Dear White People fared much better on this front.)

Bad Hair similarly brims with an assortment of concepts, but Simien has graduated to even grander aspirations, and, evidently, a grander budget. The opening scene speaks a language many black women, myself included, will be familiar with: a traumatic childhood experience derived from an attempt to remove the natural kinks and curls of one's mane. I felt this visual and audible fright viscerally while watching it play out, reminded of the years I spent relaxing my own hair with chemicals as a kid and into young adulthood. Simien's treatment of this introduction, which features a young girl named Anna (Zaria Kelley), is effective, and sets the tone for the movie's more intense explorations of body horror.

'Dear White People' Is A Satire Addressed To Everyone

Fast forward to 1989 Los Angeles, and an adult Anna (Elle Lorraine) works for Culture, a TV network targeted at "urban" (read: black) audiences, a la BET. Anna dreams of becoming the host of her own music countdown show, but the combination of a timid personality, hair that doesn't conform to white corporate sensibilities, and outright sexism has kept her sidelined in an assistant role. When a new boss, Zora (Vanessa Williams), arrives on the scene to revamp the network, Anna is advised to do something about her hair, or risk being stuck for the rest of her career.

Anna goes to the most sought-after stylist in the city to get her first weave. (The installation of the weave is chilling and expertly edited by Phillip J. Bartell and Kelly Matsumoto. Warning: This is not a film for the squeamish.) But while the new hair 'do brings her welcome attention at work, it soon becomes clear that the strands have a mind of their own.

Here is where Simien's skills as a visual stylist are again at odds with his limitations when it comes to the text. Some of the details that connote Anna's relationship to her new style are inventive and fun; in one scene, for instance, the hair flip is deployed as a tactic in the middle of a professional power grab between Anna and Zora. Cinematographer Topher Osborn mimics a grainy '70s cinema look that successfully exudes a creeping paranoia. And the details, from the spot-on nods to Control-era Janet Jackson (Kelly Rowland plays a Janet-esque pop star named Sandra) to the intricate corporate dynamics, are astutely rendered.

But layered on top of all of those smart takes is a muddled, confusing attempt at bringing in folklore that is haphazardly sprinkled in, particularly in the third act. Bad Hair gets weighted down by too many loose ends left unsatisfyingly dangling in the wind: The weave brings the terror, but what, exactly, are we supposed to take away from Simien's depiction of this fraught subject of black women's hair? It's never quite clear, and there's a missed opportunity to really unpack the psychological impact of beauty ideals within black communities and professional spaces.

Still, the movie moves briskly enough and the performances work. Lena Waithe, Laverne Cox and Blair Underwood find moments of spark in smaller roles as Anna's colleague, witchy stylist and mythology-loving uncle, respectively. And as Zora, Williams is deliciously catty and calculating, channeling mean lady vibes similar to the ones she used as Wilhelmina on Ugly Betty. She works wonders with insults and shade, striking exactly the the right notes when the movie hits its campy, B-horror movie stride.

Simien seems even more assured as a filmmaker here than he did in his debut, and the promise shown in Dear White People feels closer to being fulfilled; the specificity with which he depicts workplace culture and black music are a treat to watch. If Bad Hair feels overstuffed and ultimately slight when it comes to its central conceit around hair, at the very least it's still a fun ride.