Accessibility links
Andrew Weissmann, Ex-Mueller Deputy, On Pardons, Barr And Investigating Trump A former prosecutor says the current administration's approach is "soul-crushing," and he proposes changes for how future presidents can be investigated while in office. 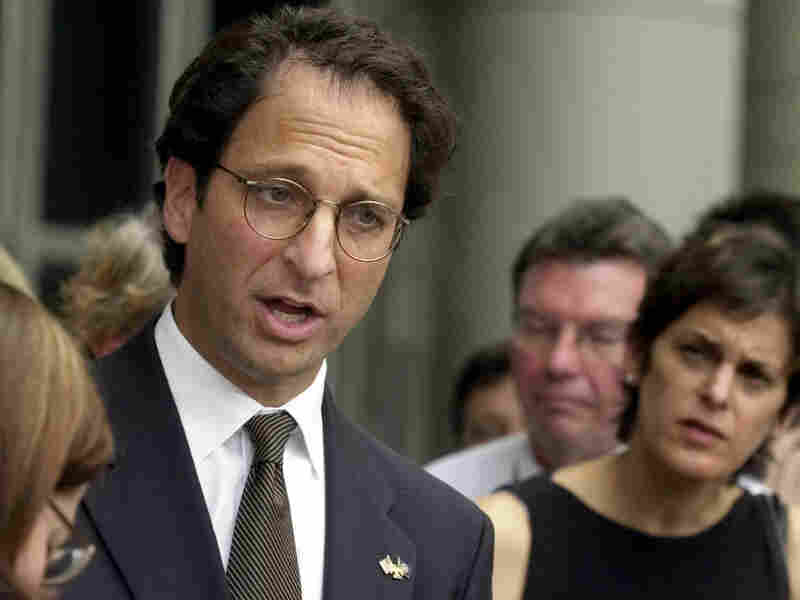 Prosecutor Andrew Weissmann talked with reporters outside the federal courthouse in Houston in 2002. His new book reflects on the past and potential future of the Justice Department. Pat Sullivan/AP hide caption 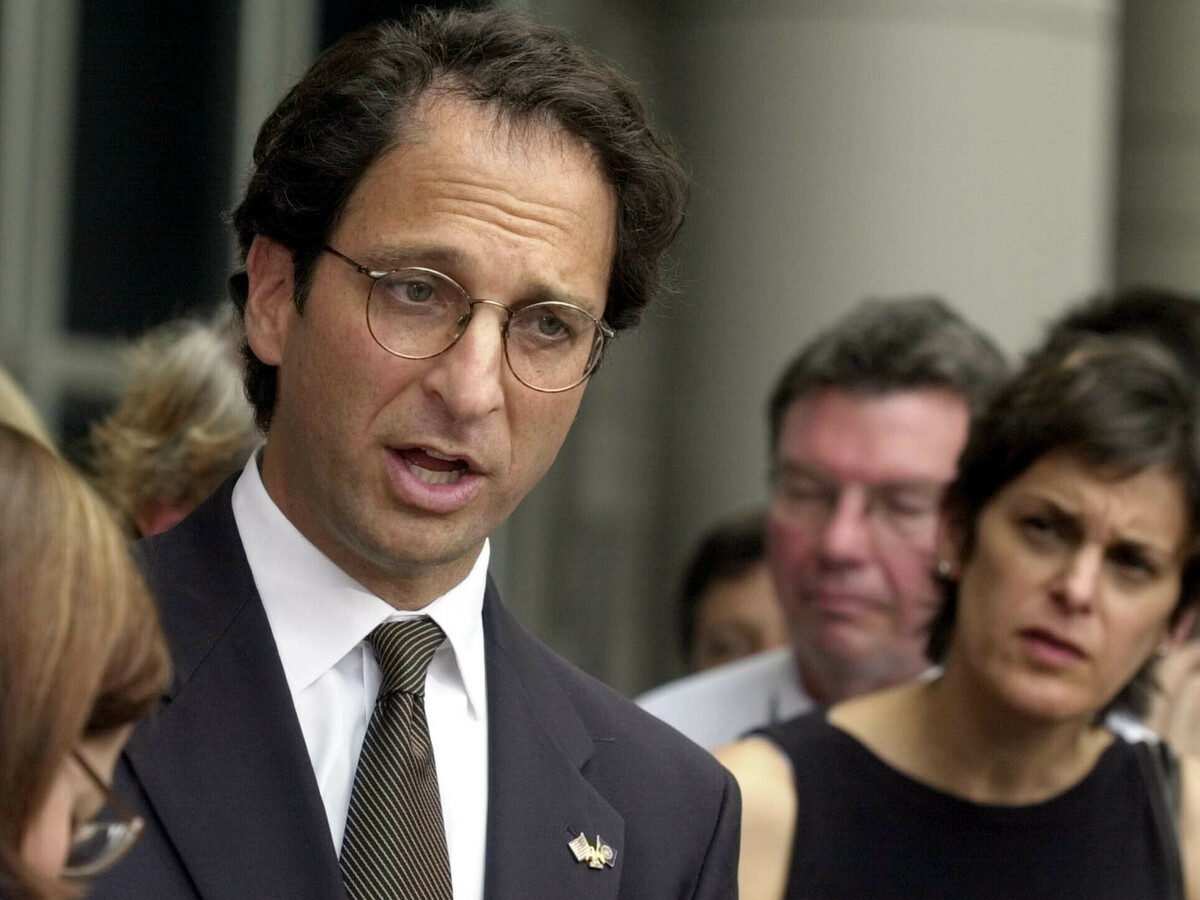 Prosecutor Andrew Weissmann talked with reporters outside the federal courthouse in Houston in 2002. His new book reflects on the past and potential future of the Justice Department.

In 1991, then-Attorney General William Barr signed the official commissioning papers of an eager young prosecutor preparing to launch his career in Brooklyn.

That lawyer went on to take down mob kingpins and corrupt corporate executives before becoming perhaps the most widely known member of the special counsel team investigating Russia's attack on the 2016 election.

But Barr's public summary of the special counsel findings, and the administration's treatment of defendants close to the White House, have prompted Weissmann to level a blistering critique at Justice leaders and his onetime top boss.

"Seeing the rule of law be really trashed by the attorney general is soul-crushing," Weissmann told NPR.

"[Trump friend] Roger Stone received disparate treatment. The Department of Justice took positions that it rejects in any other case. [Former Trump campaign chairman] Paul Manafort was released when other people who didn't fit the criteria for a [coronavirus pandemic] release were not released. And that, to me, is antithetical to the rule of law."

In a new book, Where Law Ends, Weissmann is one of many lawyers with government experience who has been thinking about what he calls the need to rebuild guard rails to protect the Justice Department from White House interference — and how to help the public better understand the next investigation of alleged presidential misconduct.

The perils of pardons

One key area is the president's pardon power, which Weissmann said prevented the special counsel team from getting to the bottom of whether campaign advisers four years ago conspired with people in Russia to help elect Trump.

No one in Trump's camp was ever charged with such a conspiracy, leading the president and allies to declare victory and vindication. Critics observe that special counsel Robert Mueller's report explicitly did not clear Trump of wrongdoing and have speculated that he and aides might have done more than authorities could prove definitively.

Specifically, Trump's ability to promise to extricate people in his orbit from criminal penalties meant authorities couldn't put sufficient pressure on them to compel them to truly reveal all they knew, Weissmann argues.

For example, investigators have established that Manafort met with a Russian contact linked with its military intelligence agency and gave him internal information from Trump's campaign. But prosecutors' sometime-cooperation agreement with Manafort broke down because of what government officials called false statements he began making — possibly because he knew he wouldn't face repercussions for them or anything else thanks to his powerful friend.

Now, in the middle of another election season, Weissmann said, the prospect of pardons is looming once again.

"I suspect strongly that if the president does not win reelection, that he is going to pardon a lot more people related to the Trump Organization, his family, people who work there, and even himself," Weissmann said. "That's obviously never been done. A president has never pardoned himself and that could be challenged by the Department of Justice if it decided it was going to go ahead with a criminal prosecution."

Trump has asserted he has the power to pardon himself, but because he says he didn't do anything wrong in the Russia investigation, he never sought to use it.

What isn't clear, however, is whether Trump also may be connected with alleged lawbreaking in his business or financial practices — or whether a Justice Department under President Joe Biden might try to prosecute him for what critics have called Trump's alleged obstruction of Mueller's work.

Long-standing Justice Department legal interpretations, followed by the special counsel team, say that a sitting president cannot be charged with a federal crime. But those interpretations no longer apply once a president leaves the White House.

What's more, presidential pardons only cover charges brought by federal prosecutors, leaving some leeway for state and local authorities. Manhattan District Attorney Cyrus Vance is conducting a bank and tax fraud investigation of the Trump Organization, but lawyers for Trump have slowed the probe, twice turning to the Supreme Court to block subpoenas from a grand jury.

Weissmann said that as he was considering a plea deal with Manafort, Trump's onetime campaign chairman, over Manafort's personal finances, he consulted with Mueller and officials in New York. Then, Weissmann said, a deputy on the special counsel team told him not to coordinate with state law enforcement "because we shouldn't undermine any pardons."

To Weissmann, who built a national reputation — and faced bitter criticism from defense lawyers — by pressuring lower-level people into cooperating against higher-ups, that sounded exactly wrong.

For all the complaints then and now by Trump about persecution, Weissmann wonders whether the special counsel team actually was too deferential.

"Because at some point, and this is sort of a mantra or or leitmotif in the book, I thought as we progressed: 'What if we pull our punches so much?' It's really: We're not doing what I thought was our job. Other people can disagree. And I thought it was better to just get fired than to not do what we were assigned to do."

For his part, Mueller himself issued a rare public statement in response to the Weissmann book.

"It is not surprising that members of the special counsel's office did not always agree, but it is disappointing to hear criticism of our team based on incomplete information," Mueller said.

Investigating a president and his inner circle is always a fraught enterprise, but Weissmann offers a few suggestions for the future.

First, give Congress and the director of national intelligence the ability to name a special counsel, not just the attorney general, he argued. Lawmakers could give that counsel the ability to refer matters to federal prosecutors or to state authorities, to avoid some pardon problems down the road.

Second, make it clear that the investigators will prepare a report for release to the public, not just to the leaders of the Justice Department — that would remove the prospect that an attorney general could filter the findings in his public comments.

And, third, create a dedicated unit of agents to investigate and prevent election interference, the way the FBI has squads focused on counterintelligence, financial fraud or other specialized tasks.

Interference by foreign adversaries persists to this day, Weissmann's book warns — a message underscored by the FBI and intelligence officials this week who warned about fresh attacks by Russia and Iran.