Accessibility links
With Florida On The Line, Both Political Parties Work To Fire Up Voters President Trump is headed to Florida where he remains popular — one poll shows him up more than 28 percentage points in the state's northwest region. But Democrats are hoping to sway some voters. 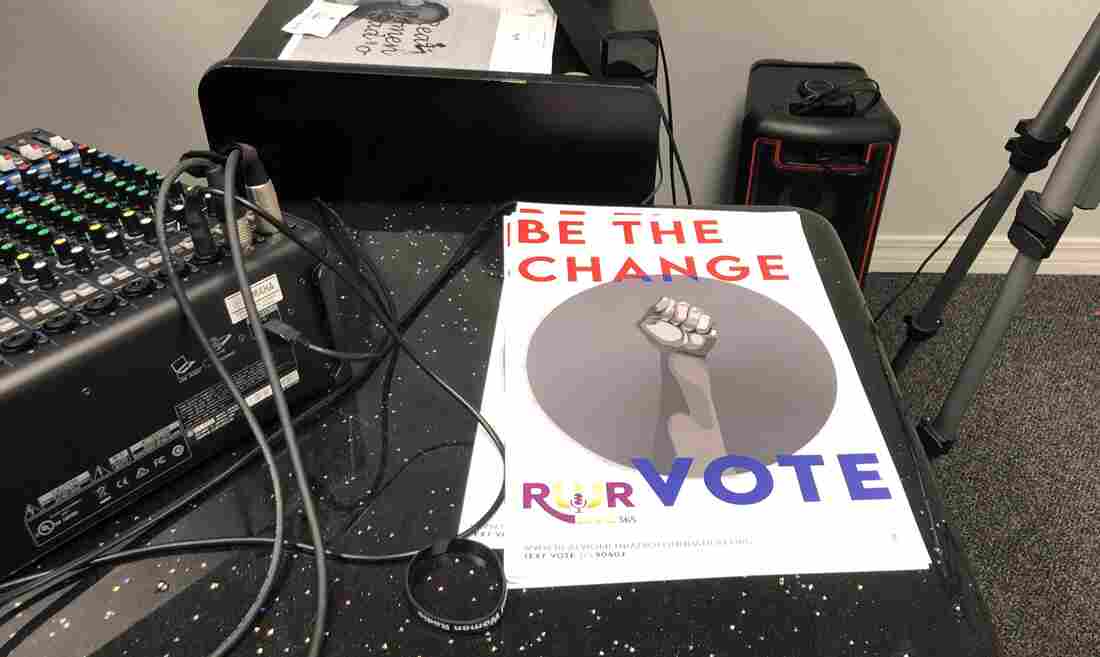 Real Women Radio, an Internet radio station created by and for African American women in Pensacola, Fla., is using these posters to help get out the vote. Debbie Elliott/NPR hide caption 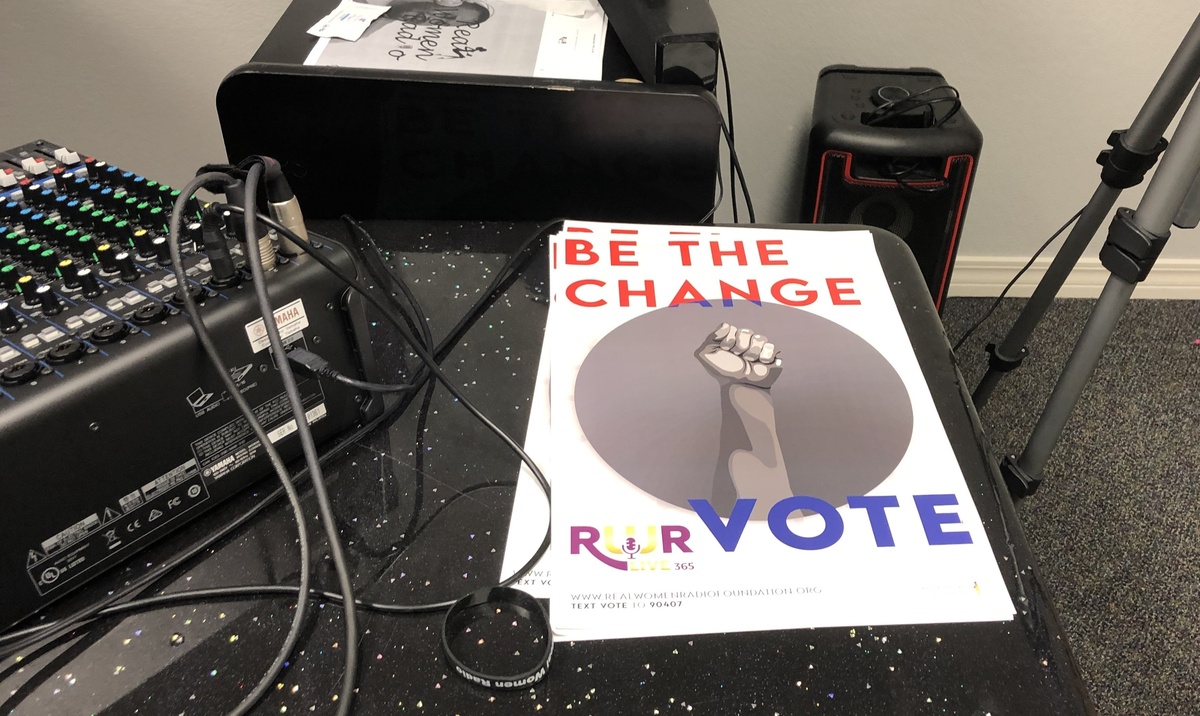 Real Women Radio, an Internet radio station created by and for African American women in Pensacola, Fla., is using these posters to help get out the vote.

President Trump is holding two rallies this week in Florida, a play to energize the voters he needs to deliver the must-win state.

Early voting and vote by mail numbers indicate Floridians are already engaged, as more than 4 million have cast a ballot already.

A new poll from Republican pollster the Listener Group shows Trump with a sizable lead in the northwest region of the state — up more than 28 points. That's typical of the GOP advantage in the Panhandle. Pensacola, a city in a part of Florida with more in common politically with neighboring Alabama and Georgia than Miami, is one of the stops for Trump.

The president remains popular in that part of the state, but Democrats are trying to make inroads.

"I just wish him out the office"

On the industrial west side of town, Phyllis Hale-Benjamin, wearing a "Black Voters Matter" mask, is canvassing at a strip center. First stop is the Mr. Bubbles Laundromat, where she hands out postcards with voting details.

Kenneth McElroy tells her he's 43, and has voted in every election since he was old enough to vote. He says there's a lot on the line in this election, in the middle of a pandemic.

"Health, safety, living," says McElroy, whose home was destroyed by Hurricane Sally so he's been living out of his car for more than a month. He won't be voting for Trump.

"He ain't fit for the part," he says. "I wish him good health, and, you know, always no animosity or bad on him. I just wish him out the office."

Outside the laundromat, Hale-Benjamin expresses a similar sentiment.

"Some of the things that have come out of his mouth as a president has been very disappointing to me," she says.

She supports Democrat Joe Biden but doesn't think he'll be able to change as much as he has promised.

"But at least we won't have to hear all of the noise, and we won't be so divided," Hale-Benjamin says.

The former hairdresser is a registered Democrat and says many of her friends are white and Republican. This election has strained relationships.

"They're scared to talk to me, and I'm scared to talk to them because you don't know what's going to come out of somebody's mouth and all that," she says. "I don't think we should have to walk around like that."

That political divide by race is evident when you look at voter registration in Florida. Only 1.3% of registered Republicans identify as Black.

"He's the best president we've ever had"

"Deep red" is how Clover Lawson of Pensacola describes the local politics. "These people work hard for their money, and they want to keep as much of it as possible."

The region voted overwhelmingly for Trump in 2016, and he's coming to Pensacola on Friday night to rally his base. This part of Florida is in the central time zone so Republican candidates typically get a boost an hour after the polls close in the rest of the state. That can be the difference in razor-tight races.

Lawson, 51, is a Second Amendment activist who works for a gun manufacturer, and says she switched her party affiliation from independent to Republican before the last presidential election because she thought politics needed a reset. Lawson backed Trump and got involved in party politics. She's campaigning for a local state House candidate.

Her parents, Simone and Ted Lawson, were equally as frustrated with politics and got behind Trump. They're sticking with him this year, too.

"My verdict today is that he's the best president we've ever had," Ted Lawson says. He's a Vietnam veteran, who retired from the civil service. Simone Lawson had a screen printing business. The couple practice Catholic charismatic renewal and say their faith informs their vote.

They say he's kept his promise to move ahead with a border wall, and the retirees are big fans of his Supreme Court nominees.

Trump's personality had given Simone Lawson pause in 2016.

His tone irritated her, but not so much anymore. The Lawsons say Trump just tells it like it is.

"Most of the people I know that don't like him, don't like him for those very reasons that he's a braggart. He's got a big mouth. He's a bully," Ted Lawson says.

"But he's our bully," his wife interjects.

"I didn't vote for Trump because he was a nice, gracious man," Ted Lawson says. "I voted for him because he got stuff done."

Clover Lawson has two sons who are young adults. In her view, Trump has done some "boneheaded" things that are distractions.

"For someone who doesn't have any experience being a politician, you can tell," she says.

But she thinks he's getting a bad rap when it comes to the coronavirus pandemic.

"I think he was handed a really bad apple this year, and to judge the other years based on this year would be terribly unfair," Lawson says.

But Trump's handling of coronavirus is what's driving many voters.

"We're in a pandemic right now, and it's chaos," says Sharia Beasley of Pensacola.

She says she's lost several family members to COVID-19 and wants a change in leadership.

"I think we just need a little break from chaos for these four more years," says Beasley, co-founder of Real Women Radio, an Internet radio station created by and for African American women in Pensacola.

Now the station is focused on the election. 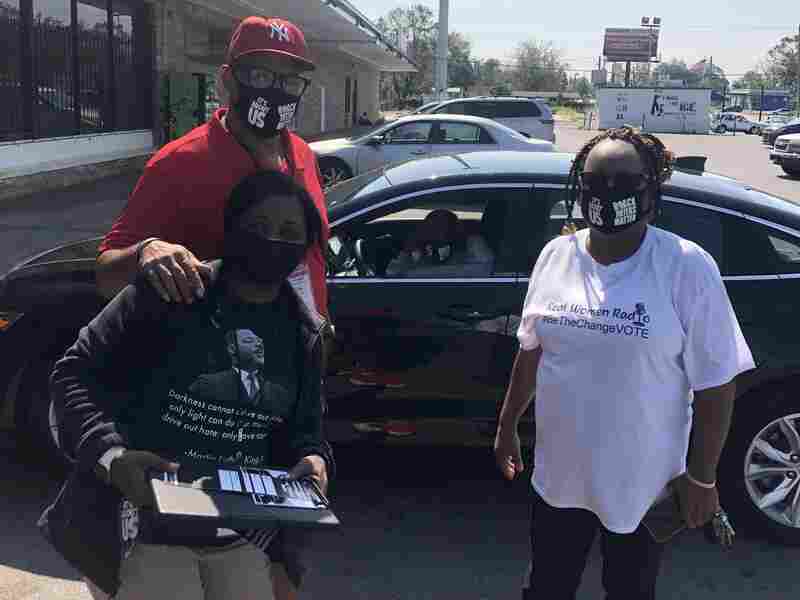 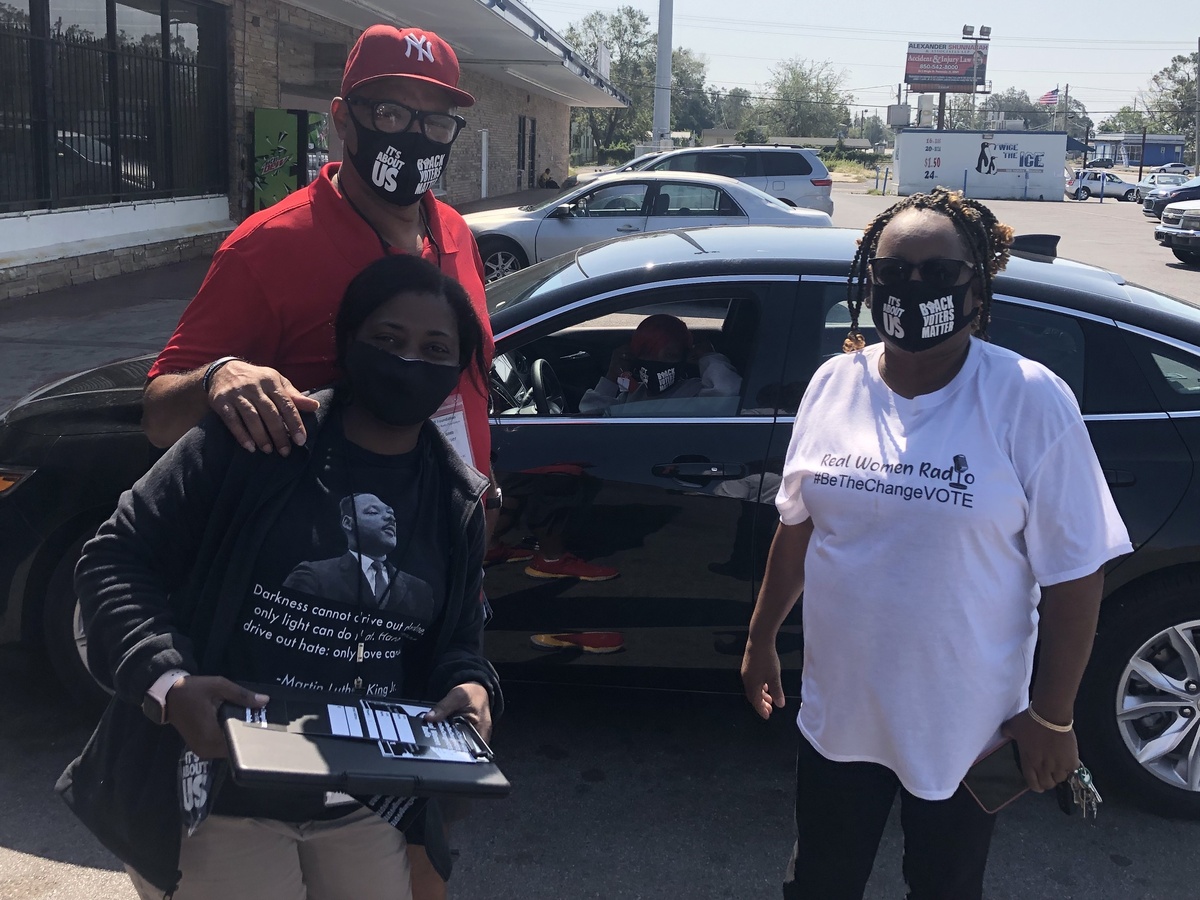 Beasley says she hasn't always been so engaged and recalls skipping the presidential election in 2000 when she was in her 20s.

"I thought at that point that Al Gore had the presidency in the bag," she recalls. "I was working and I thought why should I even go and vote?"

Of course, Florida's results were so close that the state headed for a recount and prolonged election dispute that eventually resulted in a victory for Republican George W. Bush. She's been passionate about convincing people to vote ever since despite what she perceives as obstacles to exercising the franchise — long lines for early voting and problems with Florida's online voter registration system, for instance.

Beasley is also concerned about the specter of armed militias trying to intimidate voters. She thinks the president has empowered extremists.

"Trump has said that he's not a racist," Beasley says. "But I just think that doors have been opened up to say, 'Go ahead, it's a free country, do whatever you want to do.' "

There are also outside threats to the U.S. election. The government this week said Iran and Russia have taken actions to influence public opinion related to U.S. elections.

"What is the truth?"

Clover Lawson is alarmed by what she sees as a proliferation of misinformation and conspiracy theories that reach her parents' inbox, and she tries to debunk them.

Her dad says it's hard to sort out what to believe.

"When I read an article on Facebook and it kind of tricks my starter, my children say, you know, 'Don't repost it.' So I don't because it's probably not true," Ted Lawson says. "But what is the truth?"

The Lawson family is skeptical of national polls that show Trump trailing Biden.

"He has to win," Simone Lawson says.

Her husband wonders whether Americans will accept the outcome of the election no matter who wins.

Simone Lawson says they've accepted every election in their lifetime. "A lot of times it wasn't our choice, but we always respected the office of the president," she says. "But in this case, Trump has to win."

The Lawsons say they will be voting in person on Nov. 3. Clover Lawson plans to cast an absentee ballot, something she's always done as a former military spouse.

Out on the streets of Pensacola, David Sims, a canvasser with Real Women Radio, has been working with ex-offenders re-enfranchised by a constitutional amendment approved by Florida voters two years ago. Advocacy groups say about 67,000 former felons are newly registered this election.

But Sims says the Republican-controlled Legislature has complicated things.

"They pass one law saying you can vote, and they pass another law saying you have to pay your fines," Sims says. "That's further disenfranchisement."

Sims says he believes the system is stacked against encouraging full participation by Black voters such as himself.

"If I know you're gonna vote against me, I'm going to make it where you can't vote at all," Sims says. "They're trying to silence us, and that's why we're out here."