Accessibility links
Sudan And Israel Agree To Normalize Relations In U.S.-Brokered Deal The U.S. said earlier this week that it would remove Sudan from the state sponsors of terrorism list as part of the agreement. 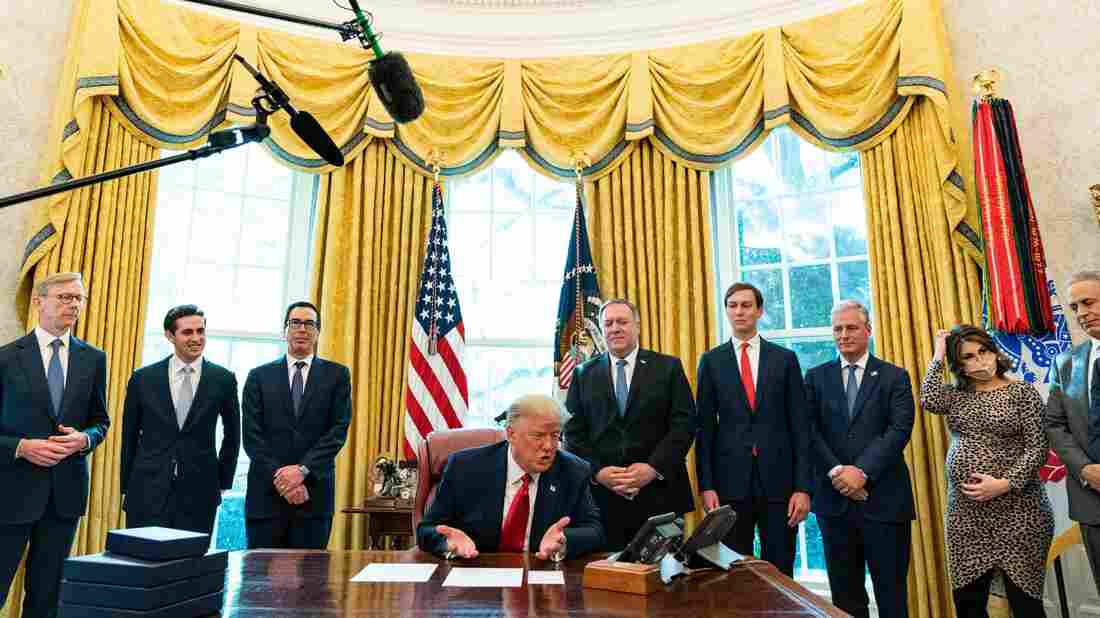 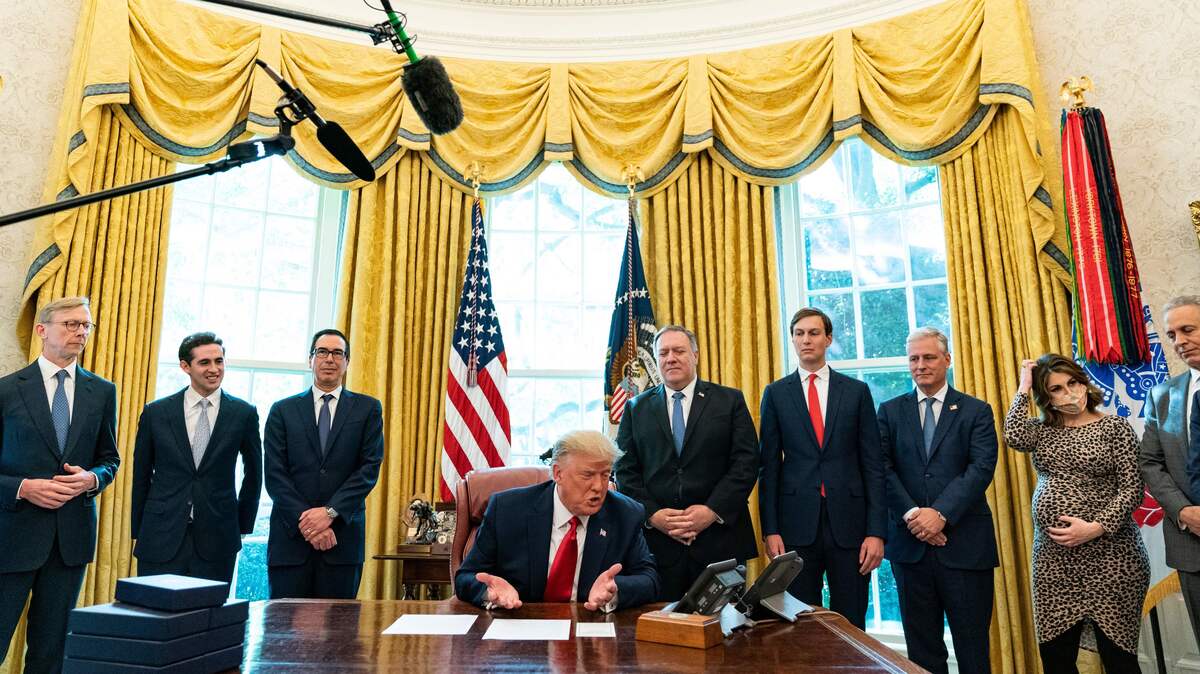 President Trump speaks to the leaders of Sudan and Israel on Friday as he announces Sudan will normalize relations with Israel at the White House. The U.S. is taking Sudan off its terrorism sponsor list and helping with Sudan's massive debt.

Israel and Sudan have agreed to normalize their relations and open economic and trade ties, the countries and the U.S. announced Friday. The U.S. said earlier this week that it would remove Sudan from the state sponsors of terrorism list as part of the agreement.

"This is an incredible deal for Israel and Sudan," President Trump said in the Oval Office, according to a White House pool report. "For decades, Sudan has been at a state of war with Israel. They have been in a state of war and boycotted Israeli goods. There was no relationship whatsoever."

Sudan has had a transitional government since last year, when the military ousted longtime dictator Omar al-Bashir following a popular uprising. The country recently agreed to pay $335 million into a fund for U.S. terrorism victims and their families, as Trump announced earlier this week.

"Once deposited, I will lift Sudan from the State Sponsors of Terrorism list," Trump said.

Sudan has been desperately trying to get out from under U.S. sanctions tied to the terror list, taking steps such as settling claims related to the bombing of the USS Cole 20 years ago and agreeing to payments over the 1998 U.S. Embassy bombings in Nairobi and Tanzania.

But Sudan recently ran into a new hurdle in getting off the terror list, after Secretary of State Mike Pompeo told the country it would also need to "sign on to the Trump administration's Middle East agenda and normalize ties with Israel," as NPR's Michele Kelemen reported early this month.

Trump's announcement of the payment agreement and his promise to lift the terrorism-sponsor label quickly increased speculation that Sudan would join Bahrain and the United Arab Emirates in agreeing to establish ties with Israel.

Palestinian leaders have long asked Arab countries not to establish ties with Israel until a mutual peace is reached between Israel and the Palestinians. On Friday, Palestinian President Mahmoud Abbas' office condemned the Israel-Sudan deal.

As part of the agreements reached this week, the U.S. will also help Sudan address billions of dollars in international debt.

Trump promised that other nations will also want to establish relations with Israel — perhaps even including Iran.

"I could see Iran ultimately — it sounds, right now, it doesn't sound like something that would happen, but I see it happening," the president said.

"Ultimately, they'll all be one unified family," Trump added. "It'll be an amazing thing. Probably has never happened in the Middle East, because the Middle East is known for conflict and fighting."

Leaders of the U.S., Israel and Sudan "spoke today to discuss Sudan's historic progress toward democracy and opportunities to advance peace in the region," the joint statement released Friday says. It adds that the historic shift will bolster regional security and open new opportunities for people in Sudan and Israel as well as their neighbors.

Resolving the terrorism compensation claims against Sudan could also give closure to a complicated and painful legal process: In 2018, the Trump administration sided with Sudan and against USS Cole survivors, agreeing that the survivors' lawsuit seeking damages should have been mailed to Sudan's foreign ministry in Khartoum rather than to its embassy in Washington. The U.S. Supreme Court threw out a $315 million judgment last year, agreeing with Sudan and the U.S. government.