Accessibility links
Voting Disinformation Surges In Election's Final Weeks Dirty tricks and disinformation have been used to intimidate and mislead voters in the past. But they have been especially pervasive this year amid a chaotic and contentious election. 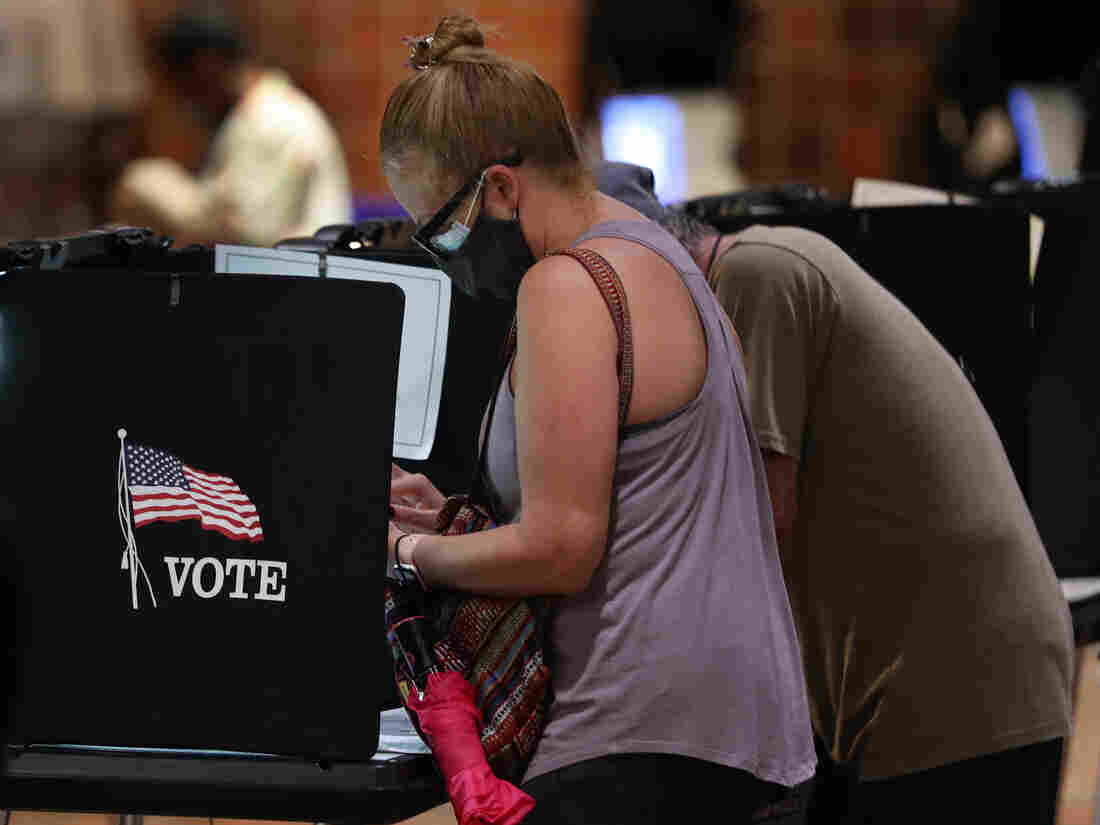 Voters fill out their ballots in Miami this week. Pandemic-driven changes to voting have led to a flood of disinformation about the election process. Joe Raedle/Getty Images hide caption 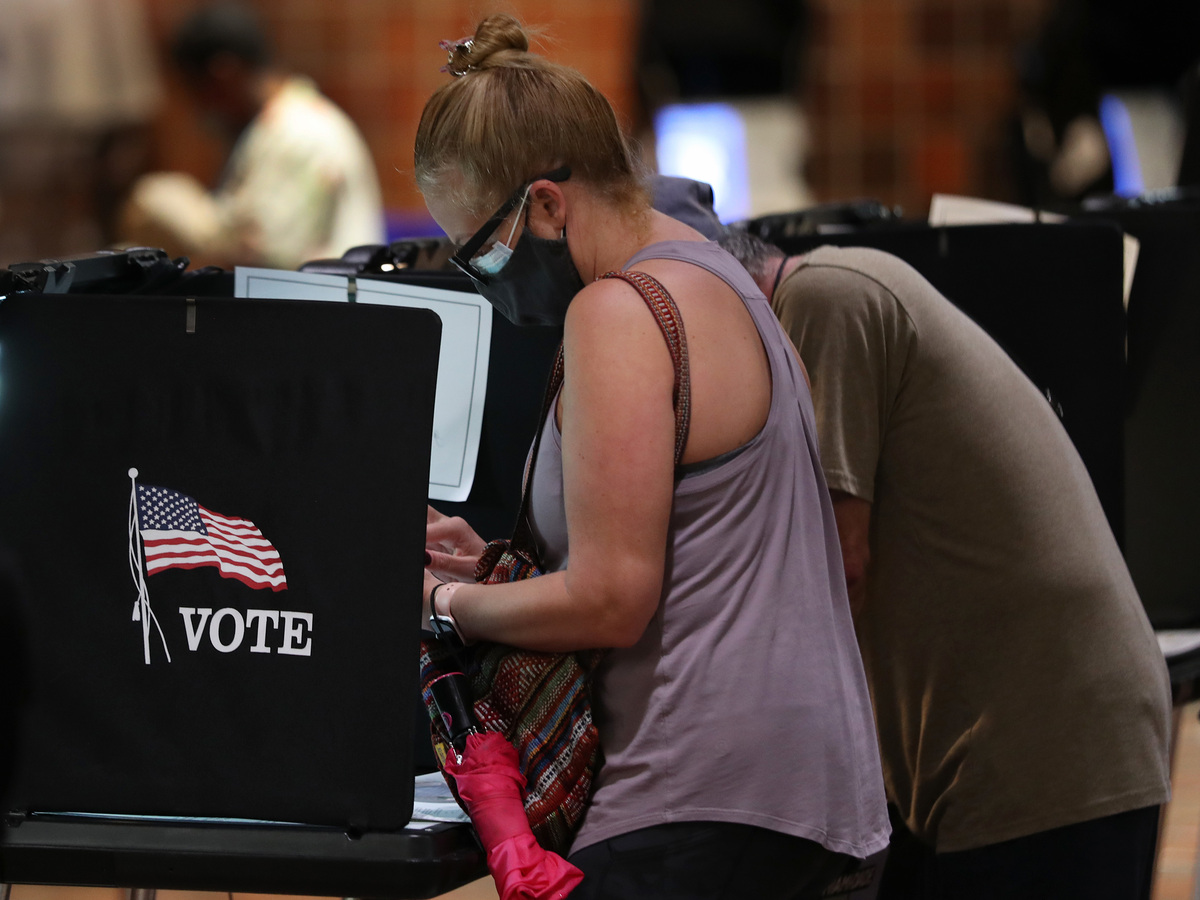 Voters fill out their ballots in Miami this week. Pandemic-driven changes to voting have led to a flood of disinformation about the election process.

Dirty tricks and disinformation have been used to intimidate and mislead voters for as long as there have been elections. But they have been especially pervasive this year as millions of Americans cast ballots in a chaotic and contentious election.

This has led to stepped-up efforts by election officials and voter advocates to counter the disinformation so voters are not discouraged from turning out.

"2020 has been a year like no other because not only have we seen a higher volume of online mis- and disinformation, we have also changed a lot of processes about our society, including the way we administer elections," said Jesse Littlewood, who leads the Stopping Cyber Suppression program for Common Cause. His nonpartisan group has already identified close to 5,000 incidents this year.

Littlewood noted that the shift to more mail-in voting because of the pandemic has opened the way for a whole new wave of disinformation.

One of the most high-profile cases involved robocalls that went to tens of thousands of minority voters in Michigan, Pennsylvania, Ohio, Illinois and New York. The calls falsely claimed that voting by mail could be dangerous.

"Mail-in voting sounds great," a woman's voice warned. "But did you know that if you vote by mail your personal information will be part of a public database that will be used by police departments to track down old warrants and be used by credit companies to collect outstanding debts?"

The woman went on to say — falsely — that the government could use the information to track people down for mandatory vaccines. "Don't be finessed into giving your private information to the man. Stay safe and beware of vote-by-mail," she concluded.

Voters In Florida And Alaska Receive Emails Warning 'Vote For Trump Or Else!'

Two right-wing operatives, Jacob Wohl and Jack Burkman, have since been charged with using the calls to intimidate voters, which is a felony.

Federal authorities also announced this week that Iran was behind threatening emails sent to thousands of Democrats in Florida and Alaska and made to appear as though they came from the far-right extremist group the Proud Boys. The emails warned voters that the group had gained access to their personal information and that "you will vote for Trump on Election Day or we will come after you."

Usually, it's difficult to identify the source of election disinformation, although it appears to come from a variety of people and groups with different agendas. Some are trying to discourage voters of the opposite party from voting. Others, such as Russia and Iran, want to disrupt U.S. elections and undermine confidence in the system.

Whatever the source, social media allow the disinformation to spread rapidly, and fringe news organizations sometimes pick up the false information and spread it even further.

President Trump has also amplified election disinformation in his effort to make the case that mail-in voting cannot be trusted. For example, he has repeatedly claimed that ballots were abandoned in a ditch in Wisconsin, although that is not true.

Online disinformation has been especially widespread. Facebook posts have warned voters that their ballots will be invalidated if a poll worker puts a mark on it, such as their initials, even though that's a requirement in many states. The fake claim led numerous election officials to issue statements such as this one from the North Carolina State Board of Elections: "In North Carolina, this is false." (The state's release put "false" in bold.)

Other misleading messages include tweets that Democrats will vote on Nov. 3 (the correct date) and Republicans will vote on Nov. 4 because of COVID-19 restrictions, and that someone can go online and change people's votes. Neither claim is true.

One false rumor circulated in Texas that bar codes on mail-in ballot envelopes can reveal personal information, including whether the voter is a Republican or a Democrat. After receiving several ballots with blacked-out bar codes, Tarrant County Elections Administrator Heider Garcia took to Twitter and posted a video warning voters that this could lead to their ballots being rejected.

Returning a mail ballot? DO NOT tamper with the barcode on the carrier envelope. Please watch the video below. pic.twitter.com/pmfOYCcc4Q

"So please, I'm begging you. Do not tamper with the bar code on your carrier envelope," he pleaded.

There have also been reports of numerous scams involving election information. Oklahoma officials said one voter received a text message that her polling place had changed, and the attached phone number turned out to be for an escort service. Scammers have also used fake voter registration sites and ballot tracking services to trick voters into sharing their personal information.

Election officials and federal authorities have been worried for months about the impact such disinformation can have on elections and voter confidence. They've been working with social media companies to identify and take down any misleading information as soon as it's identified. They have also launched a nationwide campaign encouraging voters to get their information from trusted sources, such as secretaries of state or local election offices.

The Cybersecurity and Infrastructure Security Agency in the U.S. Department of Homeland Security recently set up a site to knock down malicious election rumors, especially those originating from foreign adversaries.

Agency Director Christopher Krebs told reporters that making sure Americans have the facts is "one of the best tactics and techniques we have right now to counteract these disinformation operations and influence ops."

Still, he and others expect that efforts to mislead voters will only increase in the days ahead. In a joint statement Thursday, federal and state authorities said American voters "must remain diligent. ... Be prepared for attempts to confuse or misinform; be prepared before casting your ballot; and be prepared for foreign efforts aimed at sowing division and undermining the legitimacy of the election. An informed public is the best defense we have to #Protect2020."