Accessibility links
Trump And Biden Bring Closing Arguments To Swing States The approach the two candidates are taking in this final leg of the campaign mirrors the divergent narratives they're trying to convey about the pandemic and the choice voters face this fall. 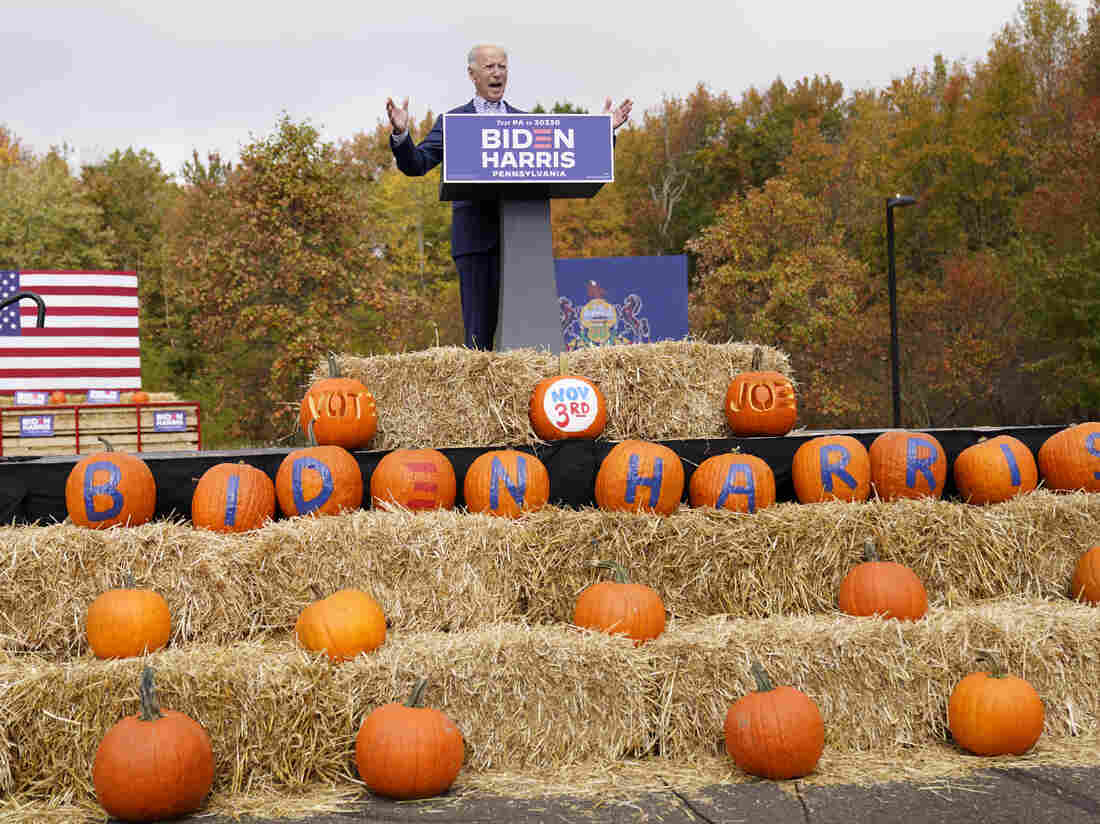 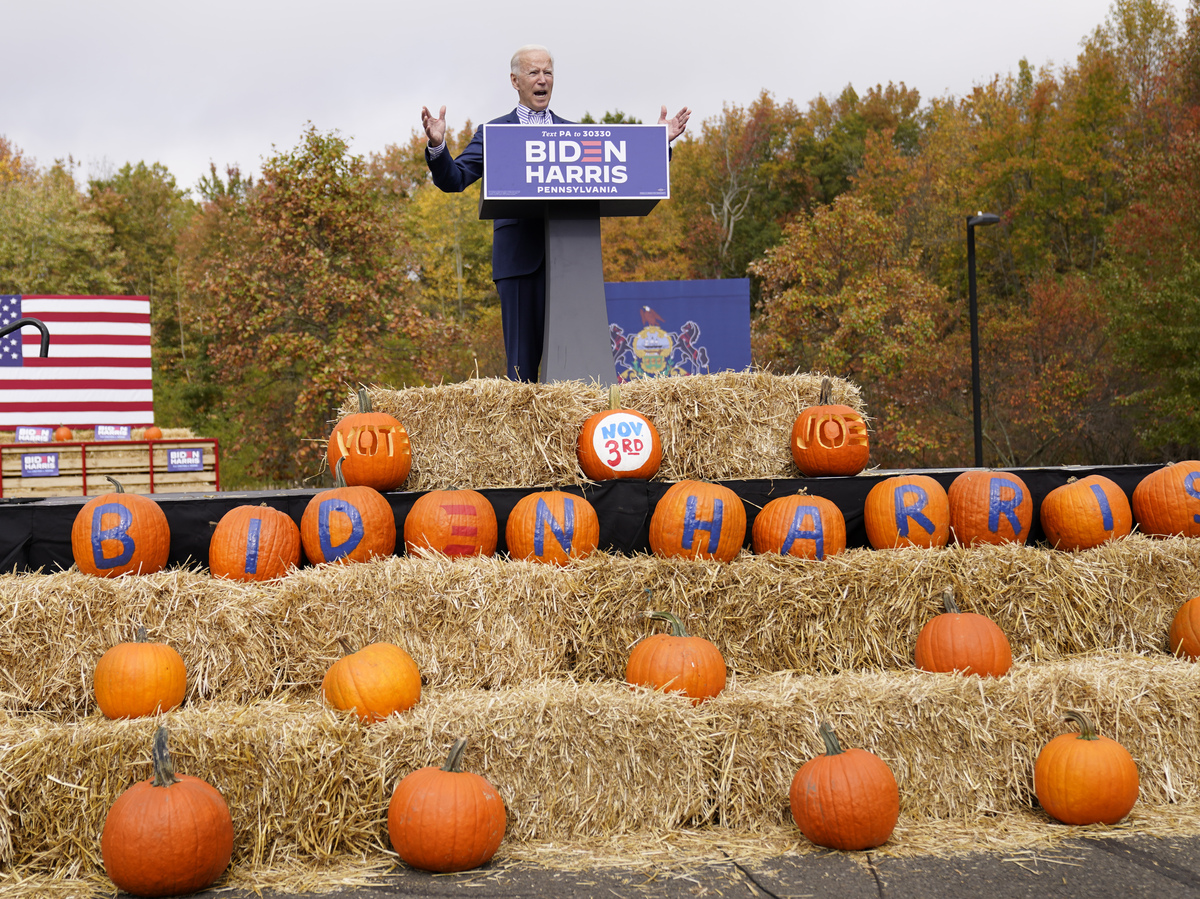 Democratic presidential nominee Joe Biden speaks at a campaign stop in Bristol, Pa. Appearances by him and his surrogates follow social distancing guidelines.

A few dozen cars at a drive-in rally in suburban Pennsylvania honked in unison as Democratic nominee Joe Biden blasted President Trump's handling of the coronavirus. In North Carolina, Trump told a packed crowd: "COVID, COVID, COVID. By the way, on Nov. 4, you won't hear about it anymore."

With 10 days to go before Election Day, the president is zipping across the country on Air Force One, holding large rallies and trying to replicate the energy of his first campaign's final week in 2016. Biden, meanwhile, is running a final stretch tailored to the realities of a worsening pandemic, maintaining a scaled-back itinerary for himself and fanning out top surrogates for socially distant, drive-in rallies in swing states.

The approach the two candidates are taking in this final leg of the campaign mirrors the divergent narratives they're trying to convey about the pandemic and the choice voters face this fall.

Backed by wagons and a stage decorated with pumpkins and bales of hay, Biden told a small audience on Saturday that while the social distancing isn't ideal, "what we don't want to do is become superspreaders," a nod to the White House Rose Garden ceremony where several members of the president's circle are believed to have become infected with the coronavirus.

The former vice president eviscerated Trump's handling of the pandemic and portrayed a more dire picture of the road ahead with the pandemic.

"It's going to be a dark winter unless we change our ways," Biden said. "Experts tell us we're going to lose nearly another 200,000 lives nationwide in the next several months, all because this president cares more about the stock market than he does you."

His remarks came a day after the U.S. hit a record number of confirmed daily coronavirus cases, recording more than 83,000 new cases on Friday.

While Biden has built his closing argument around the pandemic, Trump has been painting a rosier portrait of the coronavirus' trajectory.

In North Carolina, the president appeared in front of a crowd of several thousand with little mask-wearing and mocked Biden's assessment that Americans are staring down a dark winter ahead.

Trump repeated unverified allegations about the business activities of Biden's son Hunter and otherwise mostly stuck to his typical campaign stump speech, promising to reopen the country and promote law and order.

He also, without evidence, said the only way he will lose is because of voter fraud from mail ballots, pointing to the small size of Biden's campaign events compared with his spirited rallies. 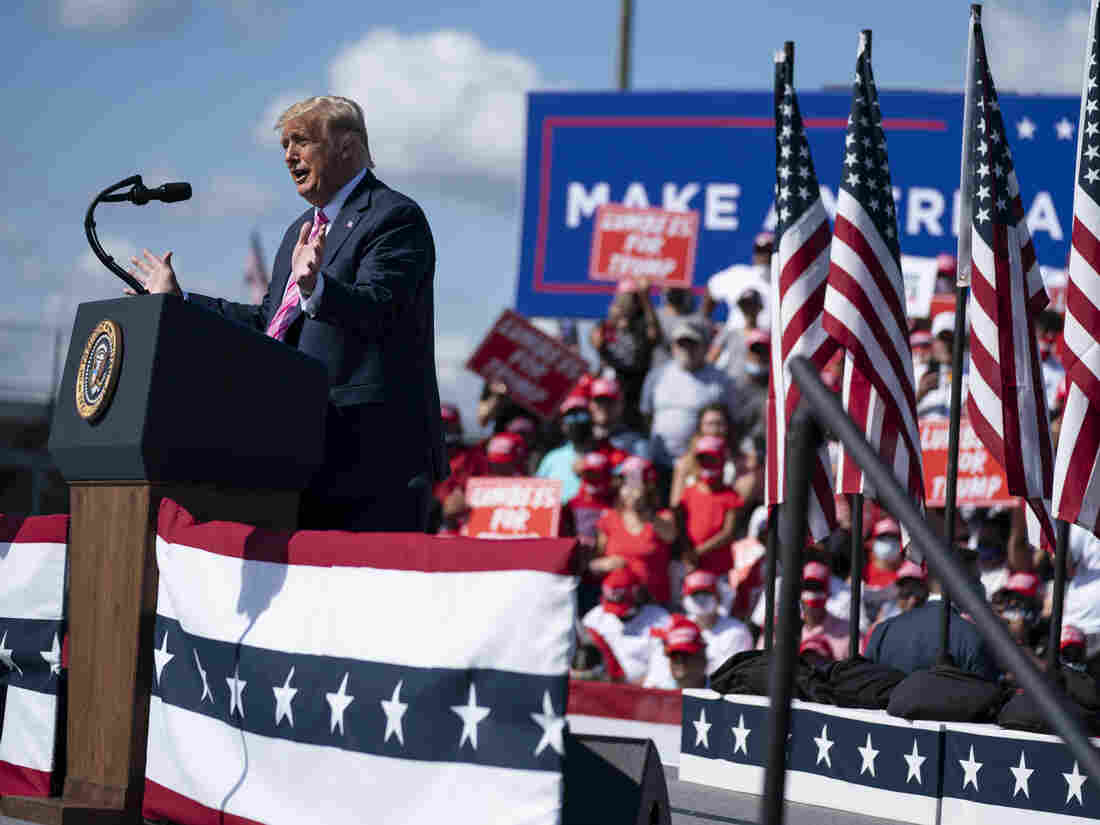 President Trump speaks during a campaign rally in Lumberton, N.C. He has played down the pandemic and played up the size of his rallies. Evan Vucci/AP hide caption 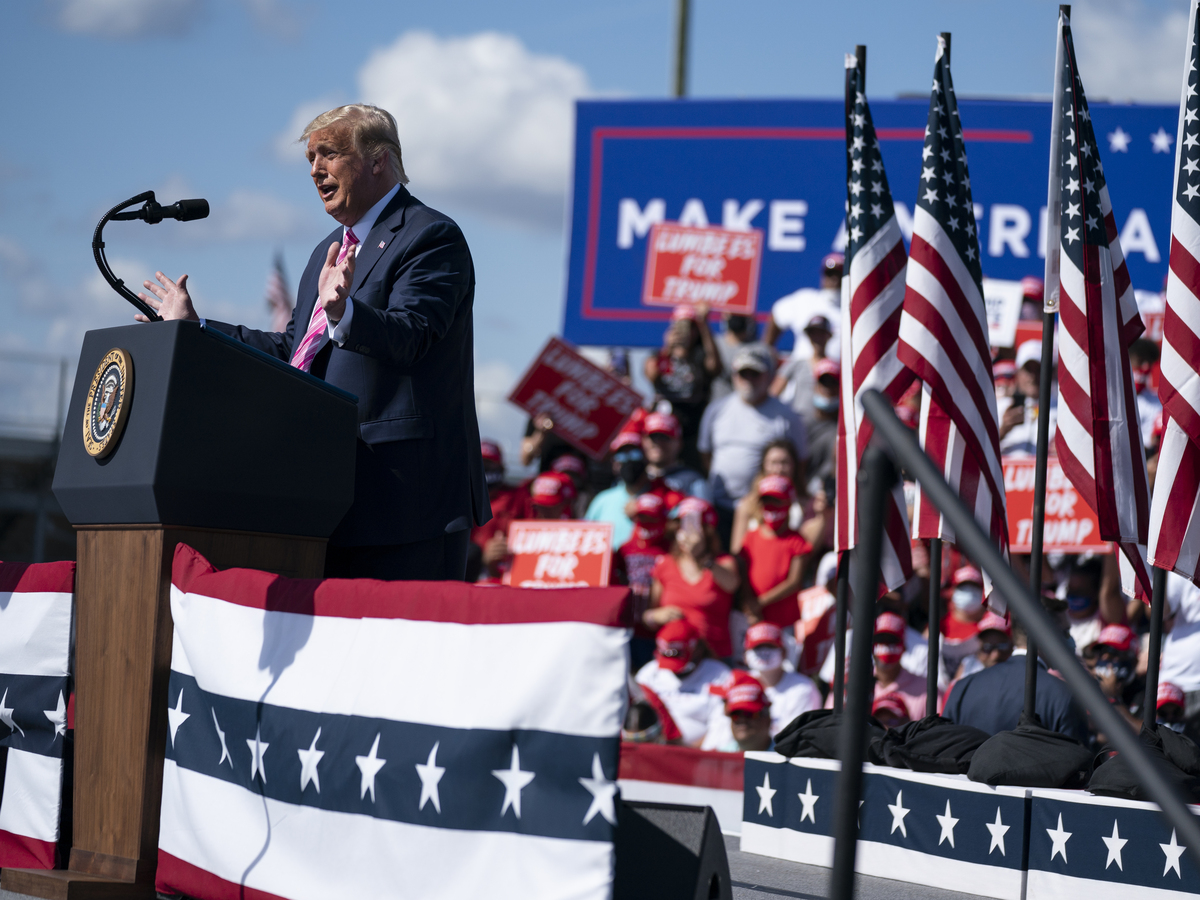 President Trump speaks during a campaign rally in Lumberton, N.C. He has played down the pandemic and played up the size of his rallies.

Trump is headlining rallies Saturday in three states he won in 2016 but is now in danger of losing, with polls showing Biden leading or in a tight race with the president in several key states.

From North Carolina, the president heads to Ohio and then to Wisconsin, which is facing one of the worst coronavirus outbreaks in the country.

In Ohio, Trump will be in Pickaway County, where he won 68.5% of the vote in 2016, before heading to Waukesha County, Wis., where Trump won in 2016 with an almost 30-point margin. Vice President Pence is campaigning in Florida.

Trump on Sunday will rally in New Hampshire, the only state on his calendar this weekend that would expand his map from 2016. Biden is expected to remain in Delaware on Sunday.

In a campaign call, the Trump campaign said the Republicans' ground game, plus Trump's breakneck campaign schedule in the final days of the race, will propel the president to a second term. The Trump campaign has boasted about the millions of doors knocked on by volunteers, while the Biden campaign has largely stuck with remote outreach.

Biden and key surrogates on Saturday were campaigning not only in states Democrats lost in 2016 — states important to a Biden victory like Pennsylvania and Florida — but also places once seen as territory friendlier to Trump, like Ohio.

The former vice president began Saturday in Bucks County, Pa., a suburban county Hillary Clinton won narrowly in 2016 and where Biden wants to do even better. He then flew to Luzerne County, which Trump flipped red in 2016, for a drive-in rally with rock star Jon Bon Jovi. Sen. Bernie Sanders of Vermont is stumping for Biden in Pennsylvania on Saturday as well.

"We have 10 days left, and it may come down to Pennsylvania," Biden told the crowd in Bucks County. 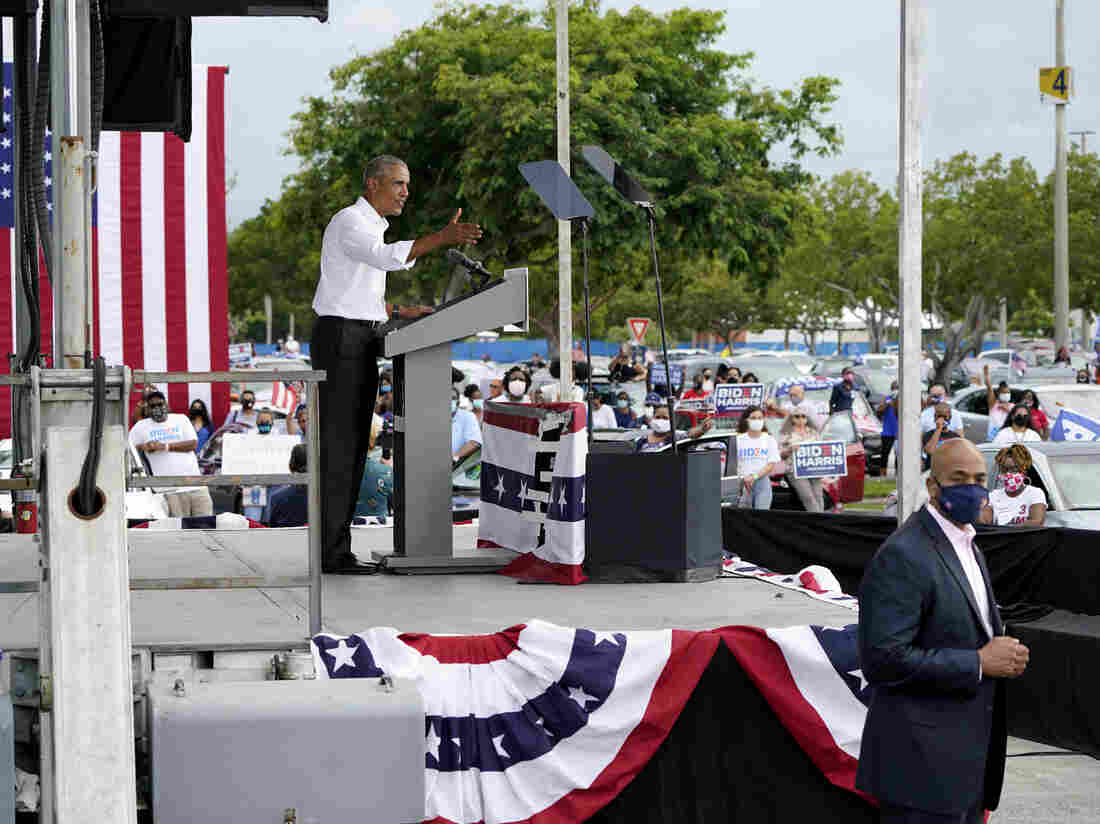 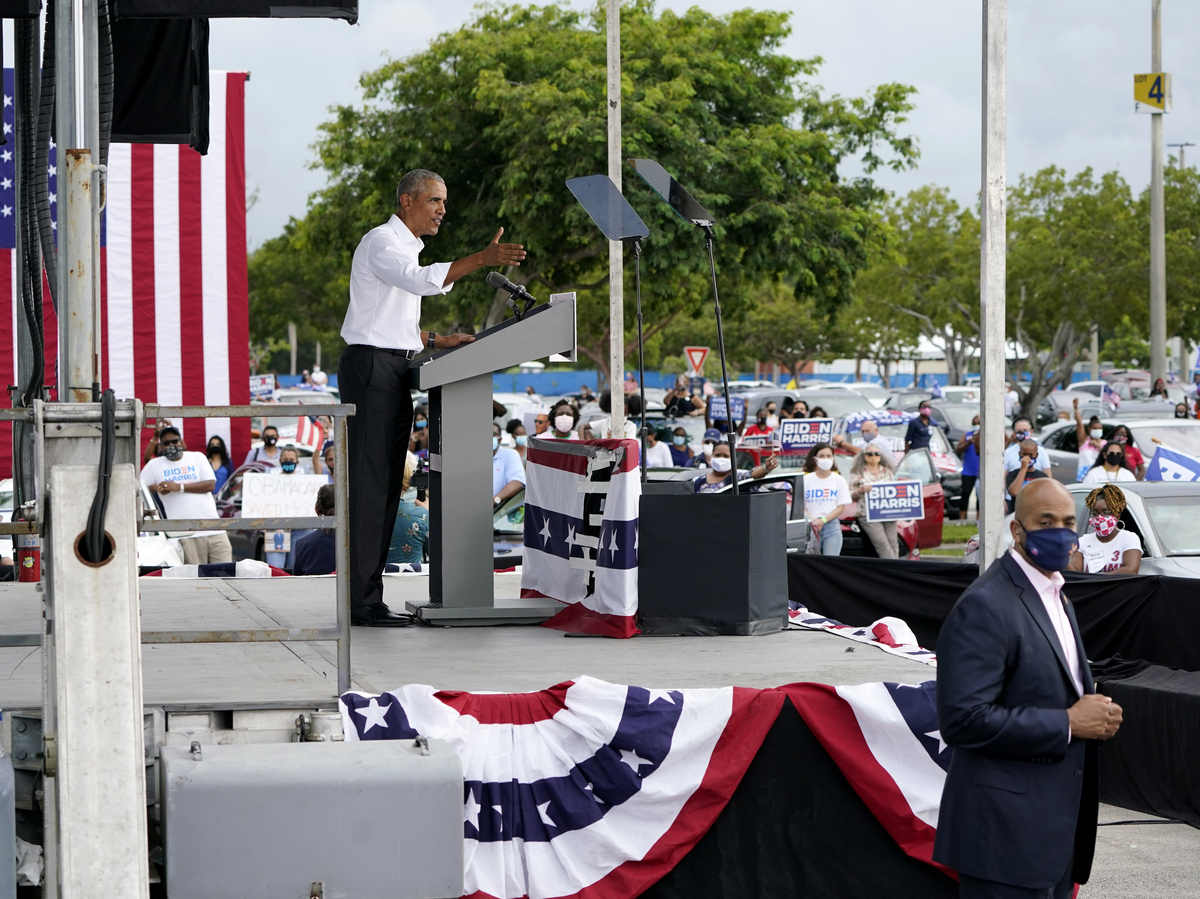 After his 2020 campaign trail debut last week in Philadelphia, the former president delivered another blistering attack Saturday on Trump's handling of the coronavirus, his behavior and his management of the economy.

"Just this week, he complained that the pandemic was making him go back to work," Obama said. "If he'd been working in the first place, we would have never seen the situation get this bad."

Obama also made a forceful case for his former vice president and encouraged people to vote, saying the next 10 days will "matter for decades to come."

According to a database compiled by Michael McDonald at the University of Florida, more than 50 million people have already voted in the election.