Accessibility links
Election 2020 And The Latinx Women Vote "It's the dehumanizing rhetoric President Trump uses when referring to immigrants" that drove Lourdes Vázquez to become a U.S. citizen and to vote in this election for the first time, she says. 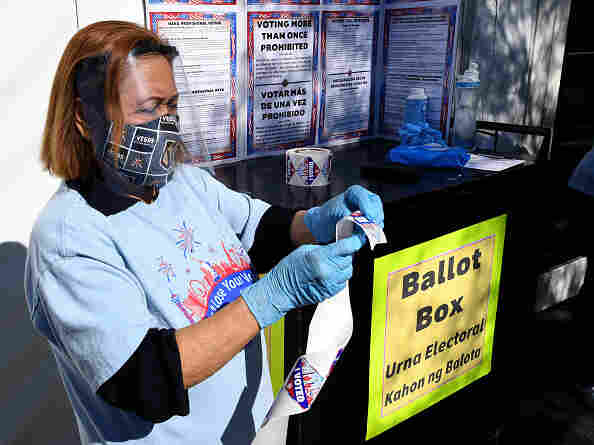 Volunteer Esmeralda Raymond gets a roll of "I Voted" stickers ready at a polling site in Las Vegas on the first day of in-person early voting on Oct. 17. Ethan Miller/Getty Images hide caption 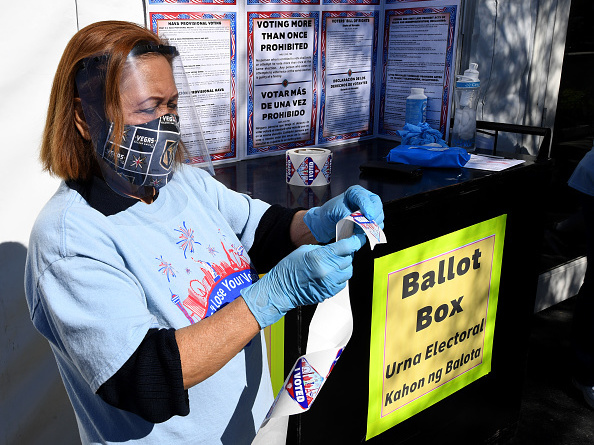 Volunteer Esmeralda Raymond gets a roll of "I Voted" stickers ready at a polling site in Las Vegas on the first day of in-person early voting on Oct. 17.

Women from the Latinx community are being hurt more by the coronavirus pandemic than any other group. Not only are they facing higher infection rates but many are also losing their jobs or getting their work hours reduced.

As a result of these hardships, a growing number of women say they are now motivated to vote for Democrat Joe Biden in the upcoming election, according to recent polling data by the Pew Research Center, a Washington, D.C., think tank.

Among them are Latina workers like Gloria María Jímenez, of York, Pa., who lost her job at a local beauty supply distributor at the end of March due to the pandemic. Jímenez was unemployed for almost half of this year, but last month she was lucky to find temporary work at a different beauty supply distributor a 35-minute drive away in Harrisburg, Pa. It will keep her employed through December, but she says the future is uncertain.

'Things have been tough'

Jímenez, 57, is a naturalized U.S. citizen who came from the Dominican Republic in the late 1980s. She lives with her adult daughter, Adelaida Sánchez, in battleground state Pennsylvania.

"Things have been tough," she says, noting she fell behind on rent. "And the father of my children died in March of COVID. It's been too much for my daughter, who also lost her job at a restaurant. She's fallen into depression."

Unemployment hits Latinx women harder because they are more likely to be the head of a single family and are the primary caretakers at home, caring for sick relatives and helping children navigate distant learning in this pandemic — an added stress, according to the Economic Policy Institute.

Jímenez says she wants the next president "to create good jobs, affordable health care, housing and education." She says she takes medication for high blood pressure and that she and her daughter are covered under Medicaid.

Jímenez says she voted for both President George H.W. Bush and his son George W. Bush, but also for President Obama and Hillary Clinton. She says she didn't like what she heard from Trump on the campaign in 2016. Jímenez's 28-year-old son and 20-year-old daughter are planning to vote for the first time for Biden. 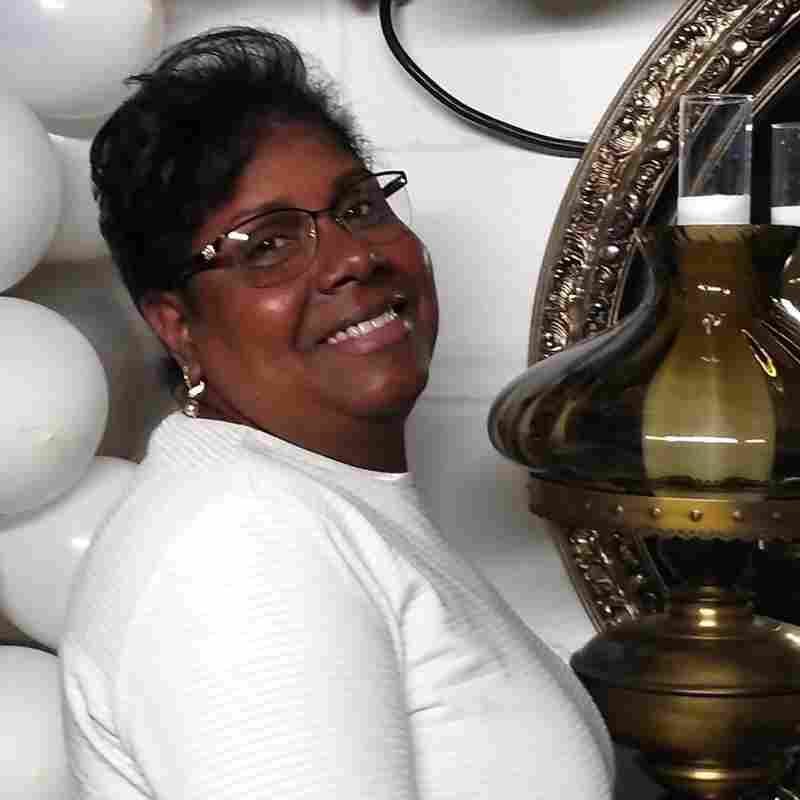 Gloria Marí­a Jímenez, says she's voting in person in York, Pa., in this election not only to make her voice heard, but also to give voice to Latinx who can't vote. Gloria Marí­a Jí­menez hide caption 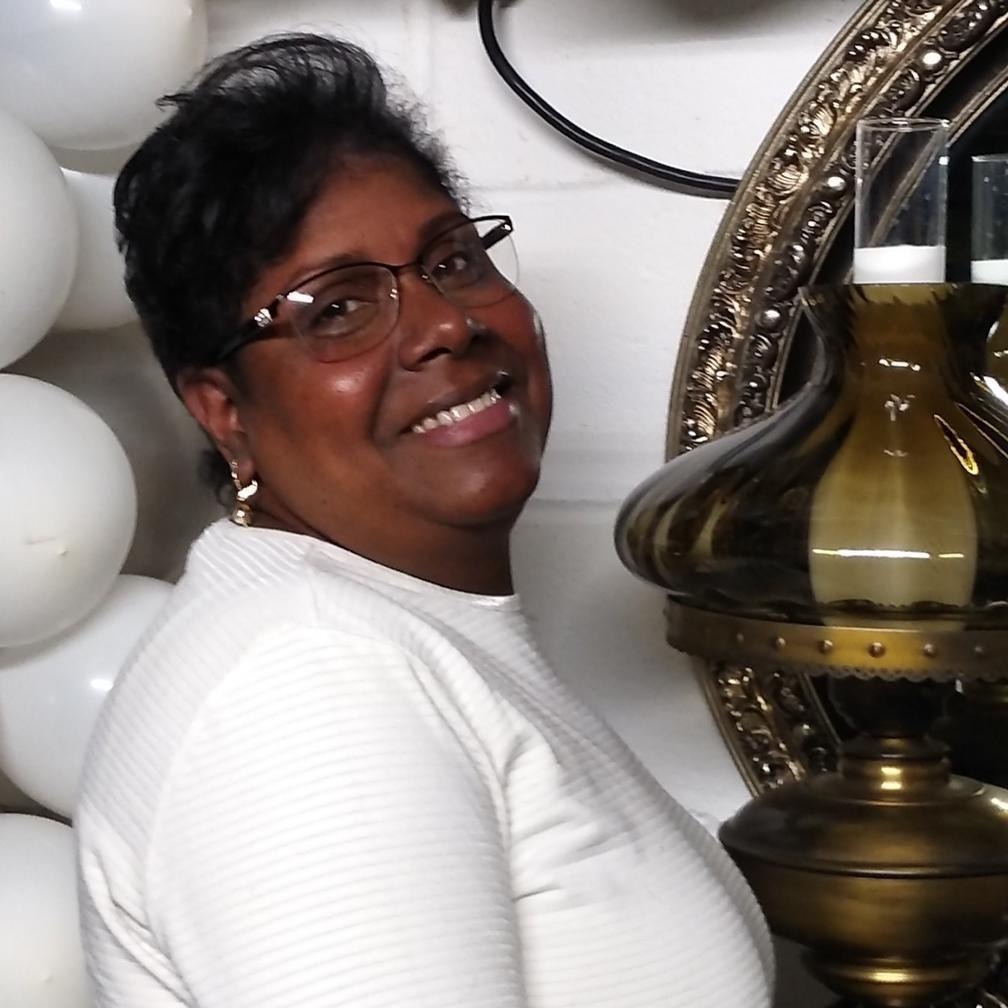 Gloria Marí­a Jímenez, says she's voting in person in York, Pa., in this election not only to make her voice heard, but also to give voice to Latinx who can't vote.

Latinx women are heavily employed in some of the industries hardest hit by COVID-19. In the hospitality industry alone 14.6% of Latinas make up the workforce, higher than whites at 9%, as well as Latinx men at 11.6%. Retail and "other services" also employ a large percentage of Latinas, according to the Economic Policy Institute. In April one in five Latinx women workers were unemployed.

"They still haven't quite recovered in terms of their job market opportunities like men have," says Mark Hugo Lopez, Pew Research Center's director of Global Migration and Demography.

Lopez says Latinx women are becoming more politically engaged and it could perhaps reflect a "political awakening." He says the coronavirus pandemic is pushing women to vote for democratic candidates in this election in numbers greater than men. The 2018 elections showed historic participation with the number of Latinx voters nearly doubling from 2014 to 2018, according to the Pew Research Center.

Many Latinx women are voting for the first time. Women like Lourdes Vázquez who is voting for Biden. After more than three decades living in the U.S. as a permanent resident, Vázquez became a U.S. citizen two years ago, she says.

"It's the dehumanizing rhetoric President Trump uses when referring to immigrants" that drove her to file for U.S. citizenship, she says.

"Hearing the president calling us 'animals' and 'roaches' was very hurtful, very painful," says the 66-year old Mexican-born woman. "I needed to raise my voice for change."

Vázquez works for a local human rights organization but says she doesn't have health insurance. She decided to vote for Biden because among other things, she says Trump's rhetoric and policies have polarized the country and she thinks Biden can unite people. "I hope he condemns racism and discrimination," she says. 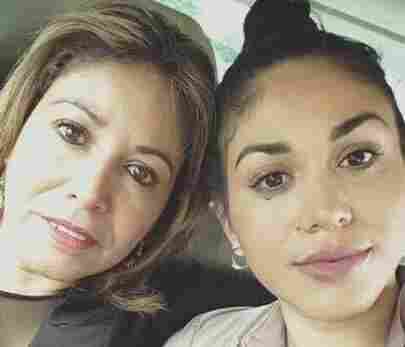 Lourdes Vázquez became a U.S. citizen two years ago and she's voting for the first time in this election. She's here with her daughter Yuridia Cruz, 30, a U.S.-born citizen. Lourdes Vázquez hide caption

Vázquez says that she raised her two U.S.-born children to be politically engaged, even though she didn't have the privilege to vote, until now.

Vázquez voted already in Las Cruces, N.M., where she lives. "I'm relieved," she says in a soft voice.

Lourdes Vázquez is among more than 18,000 immigrants in New Mexico who have become citizens since 2014. About 57% of them are women and a majority from Mexico, according to a recently released report. These new citizens are expected to play a key role in this year's elections though the impact will depend on how many go to the polls.

Despite the growing Latinx eligible voter population in the U.S., currently at 32 million, their electoral power has been historically limited by low voter turnout, according to the Pew Research Center.

"Often women are apolitical due to language barriers, feeling insecure about navigating the voting process and thinking that their vote won't make a difference," she says.

She says Bernie Sanders' campaign successfully registered a high number of Latinx. "It's not rocket science. It boils down to get to be known by the community, get your positions known in the community and do outreach. It pays off," she says.

A recent UnidosUS survey shows that the issues energizing Latinx women in this election include "an effective response to the pandemic, lowering the cost of health care and job creation," followed by growing concerns about discrimination against immigrants and Latinos, Martínez De Castro says.

"Dreamers should be allowed to stay in this country," she says referring to participants of Obama's program, Deferred Action for Childhood Arrivals program, or DACA. It protects undocumented persons from deportation — immigrants who were brought to the U.S. as children.

Capellán, 66, is retired. She worked as a nurse in her native Dominican Republic, but in York, Pa., she sorted recycled materials in the office of waste and management, she says.

She lives with her husband, her grown son and his family, including two grandchildren. Capellán is the main caretaker in the family, she says. She and her diabetic husband tested positive for COVID-19 in June. Both have recovered.

"The stress of testing positive was worse than the symptoms," she says.

She says she "worried to death" about her husband whose high fever would not subside for weeks, and also about infecting her son's family.

Capellán, who describes her family and herself as devout Christians, says, "President Trump lacks humanity, he's selfish and arrogant."

She says Trump's handling of the coronavirus pandemic reflects that. "People, especially people of color, are dying from COVID-19 and he's not doing anything." She says the administration's inaction feels racist to her.

According to a recent survey, Latinx women could change the election. With the crushing impact of the coronavirus on the Latinx community, more than 50% of Latinx women disapprove of Trump's handling of the pandemic, 77% say Trump ignored early COVID-19 warning signs and downplayed the seriousness of the pandemic, and 67% say they'll vote for Biden.

"These are the most important elections of our lives as immigrants, as people of color and women," says Jossie Flor Sapunar, communications director at Casa in Action, an organization that has been doing voter outreach work in immigrant and people of color communities in the Mid-Atlantic region for the past 10 years.

She says the Trump administration has demonstrated it's "very anti-immigrant, very anti-Black." If these elections don't bring about change, she says, "We as Latinos, as immigrants, as people of color are in big trouble because that means the policies that will turn out in these next four years are going to attack us."