Accessibility links
Review: 'To Hold Up The Sky,' By Cixin Liu Cixin Liu's latest collection — made up of several decades' worth of stories — showcases a science fiction that harks back to the earliest days of the genre, before grimdark or galactic empires. 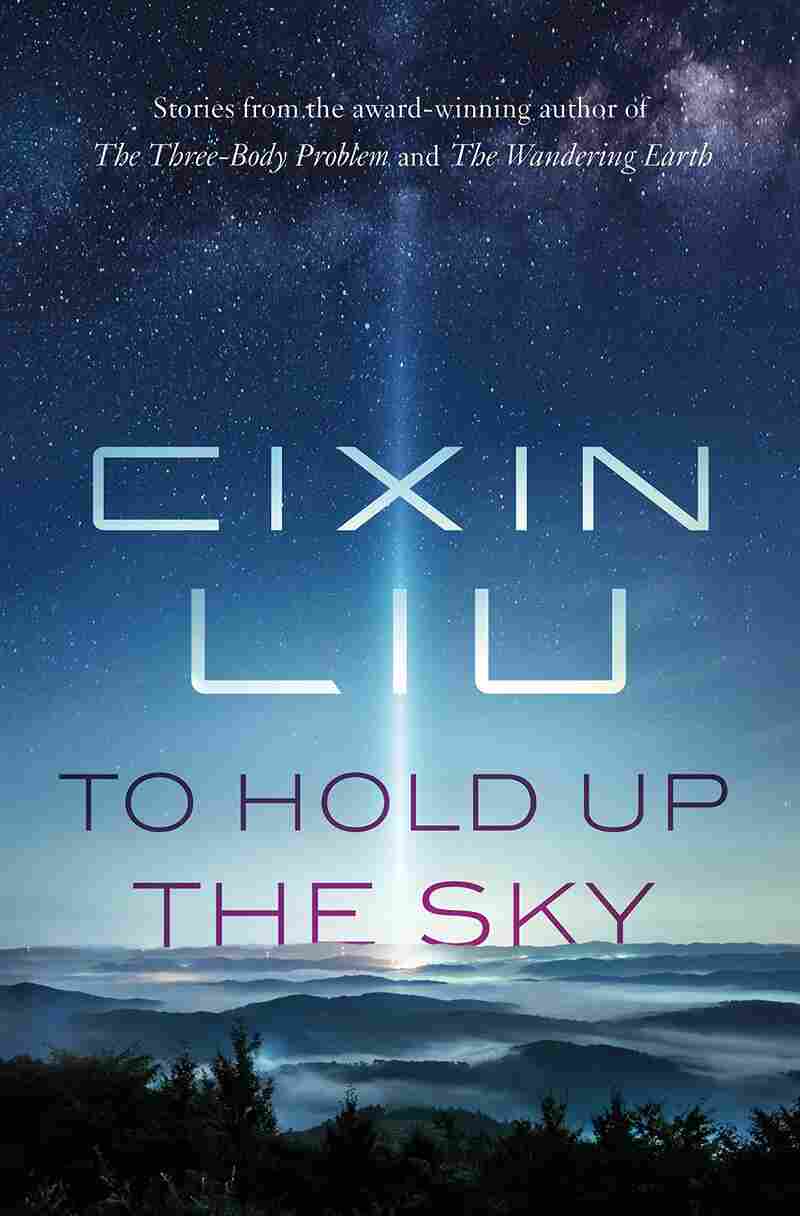 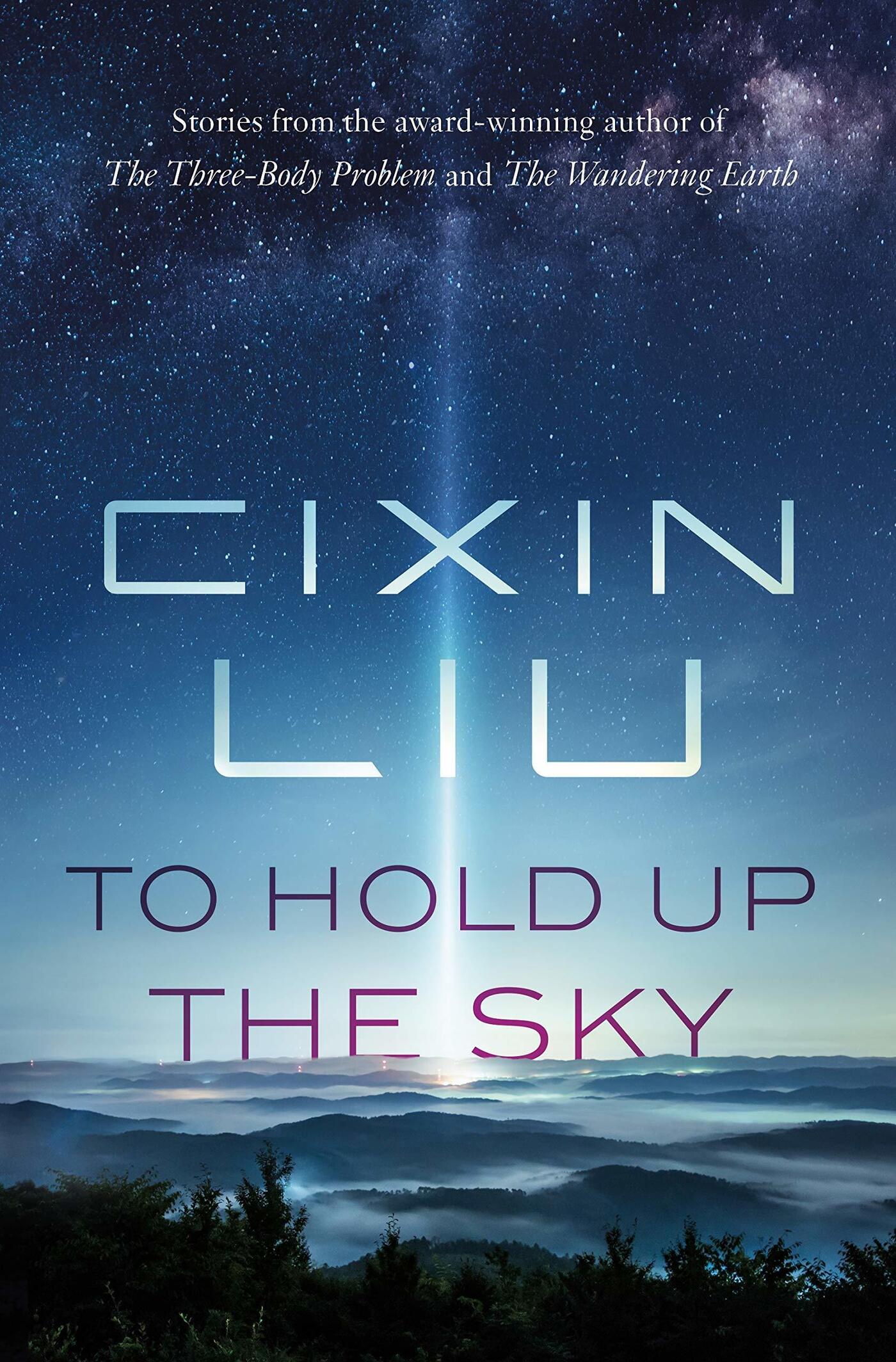 Cixin Liu's To Hold Up The Sky is a 1974 Chevy van with icy moons and swirling nebulae painted on the side that you saw for sale by the side of the road in a snowstorm. It is a copy of Heavy Metal you found stuck in the back of the rack at Empire Comics when you were looking for old Savage Sword of Conan issues to read on a long road trip with your parents. It is the torn cover of a faded sci-fi paperback you found at the thrift store and spent the afternoon reading in the car while you waited for a girl to get off work and let you into her apartment for which you didn't yet have a key.

It is magic, this collection of short stories Liu wrote and published ten, 20, 30 years ago. It is a time machine; a split-vision tunnel that lets you go back in time while staring forward, to see what 2003's or 1985's version of 2010 or 2020 or 3000 looked like from China, in the pages of the Beijing edition of Esquire or Chengdu's Science Fiction World and Novoland Fantasy.

"At that time, sci-fi was still a very marginal pursuit in China," Liu writes in his foreword. "Science fiction is seen as something foreign."

And you can see it (smell it, taste it) in every page — a sense of artistic isolation and loneliness, sure, but also the compounding joy of exploration. Of discovering new territories and imagining other frontiers. "For my part, I have never consciously or deliberately tried to make my sci-fi more Chinese," he writes. Because science fiction, when done well, when done thoughtfully, engages ideas of humanness beyond nationality or ethnicity. It is a language more concerned with humanity in general than the specific sub-categories thereof. Because the aliens don't care about our addresses, of course. To them, we all taste the same.

In Cixin Liu's 'Supernova Era,' The Children Really Are The Future

Because Liu is at play here, alone with a toy box full of rocketships, circuit boards, plastic tanks and army men. "The Time Migration" (translated by Joel Martinsen) has a Harlan Ellison quality (something in the exclamation points, the righteous surprise at every turn) and compresses 10,000 years of human evolution into a few thousand words, using cryogenic freezing to allow his witnesses to whistlestop through the centuries, periodically dropping in on humanity to see it move beyond war, beyond beauty, beyond individual consciousness and, finally, beyond life. "Contraction" (translated by John Chu) feels like something lifted whole from Asimov's Science Fiction — its brevity and compactness attractive, its whole existence hanging on one complex scientific hook. "Mirror" (translated by Carmen Yiling Yan) is a kind of sci-fi whodunit that ropes in complex algorithmic discussions, superstring computing, simulation technology, IT stack overflow limitations and a long explanation of the Big Bang in order to tell the tale of a Chinese government official screwed over by politics. And the following story, "Ode To Joy" (Martinsen again) is, ironically, about a giant mirror that plays stars like musical instruments.

"The Village Teacher" (translated by Adam Lanphier) seemed too simple and too pat (a rural teacher, dying of cancer, teaching his students about Newton's laws of motion just before a massive alien battlefleet arrives to test our species' intelligence by ... asking it about Newton's laws of motion), but as the first story in the collection, it sets up a dichotomy that plays out over and over again. In "2018-04-01" (Chu), Liu envisions a new gene therapy that allows people to live 300 years, and possibly forever. The story, though, is about a single man contemplating embezzlement in order to pay for the treatment, and what a couple hundred extra years of life would be worth to him in exchange. In "Fire In The Earth" (Martinsen), a new mining technology goes terribly wrong, but leads to a future breakthrough that allows for the safe extraction of gassified coal. Liu tells it as a tender story about the son of a miner trying to make life better for all the fathers and all the sons who go down into the mines, and how failure breaks you.

'To Hold Up The Sky' gives us a window that looks out over a different sci-fi landscape than we've seen in decades. Because science fiction was like this once upon a time: strange and alien, liberated, trope-less, exuberant, young.

There is an earnestness here. A human-centered vision of advancement that makes for complicated reading because Liu can bounce so quickly (so oddly, so sharply on occasion) back and forth between emotionless recitation of scientific facts and pure living drama that his stories tie the two things together in ways that few other writers can manage. His stories offer you a shiny new thing (a mining technology, eternal life, a complicated treatise on modern electronic warfare) and then ask you to consider who created it, and how, and why, and what it cost. He offers a father and a son and asks what hardship, what love, must've existed before the shiny new thing came to be? In half the stories in this new collection, he centers humans among the whirring, blinking gizmos of sci-fi and questions what price his humans are willing to pay. In the other half, he gives us aliens, unknowable and strange, playing stars and offering poetry, and asks us how humanity might react.

And in this balance — in its studied lack of irony, its simplicity, its lack of stepped-back post-modernism — To Hold Up The Sky gives us a window that looks out over a different sci-fi landscape than we've seen in decades. Because science fiction was like this once upon a time: strange and alien, liberated, trope-less, exuberant, young. It operated without maps or guiding principles, got lost, found its way, moved on. Before genre factionalism and the days of grim-dark apocalyptica, before Federations and Empires, before the calcification of semiotics, there was the simplest of questions: What would happen if...?

To Hold Up The Sky reminds me of those days. Of science fiction without guile, without snark, without ironic disaffection and all its exhausting modern baggage. It just asks what would happen? Waits for someone to answer. And then it asks again.