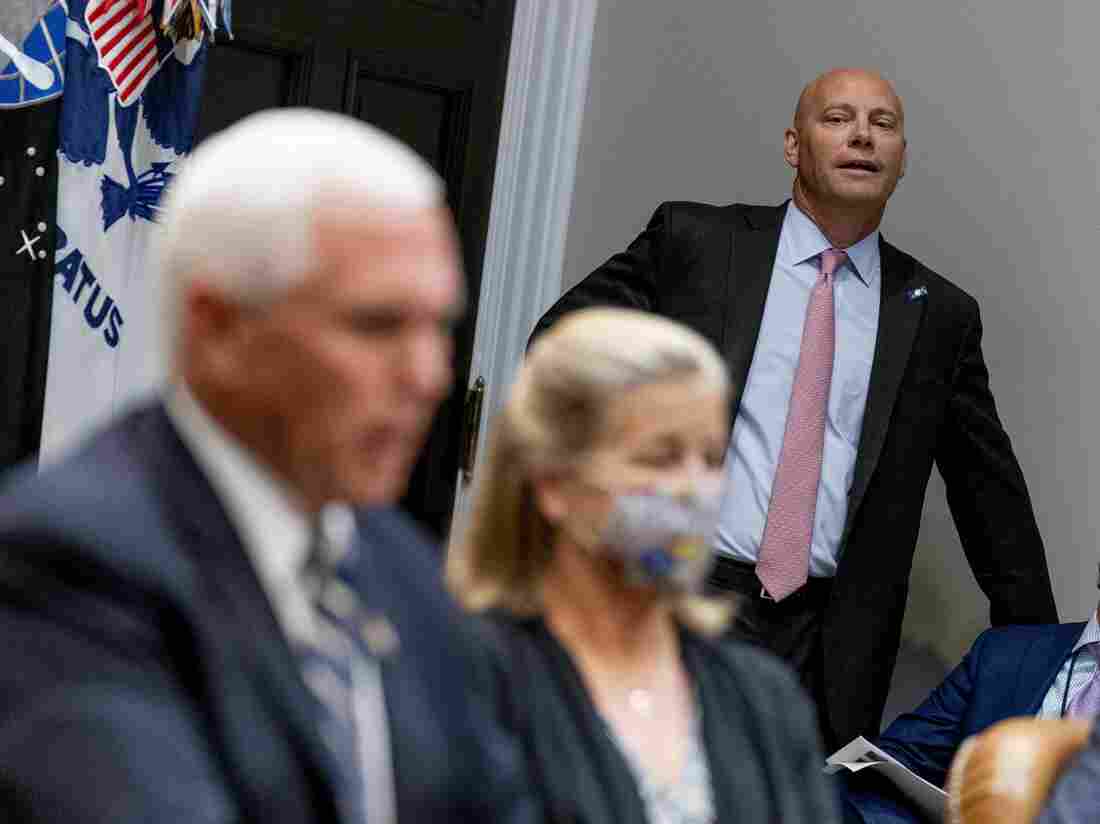 Marc Short, the chief of staff to Vice President Pence, listens to Pence speak during a White House event in September. Short tested positive for the coronavirus on Saturday. Andrew Harnik/AP hide caption 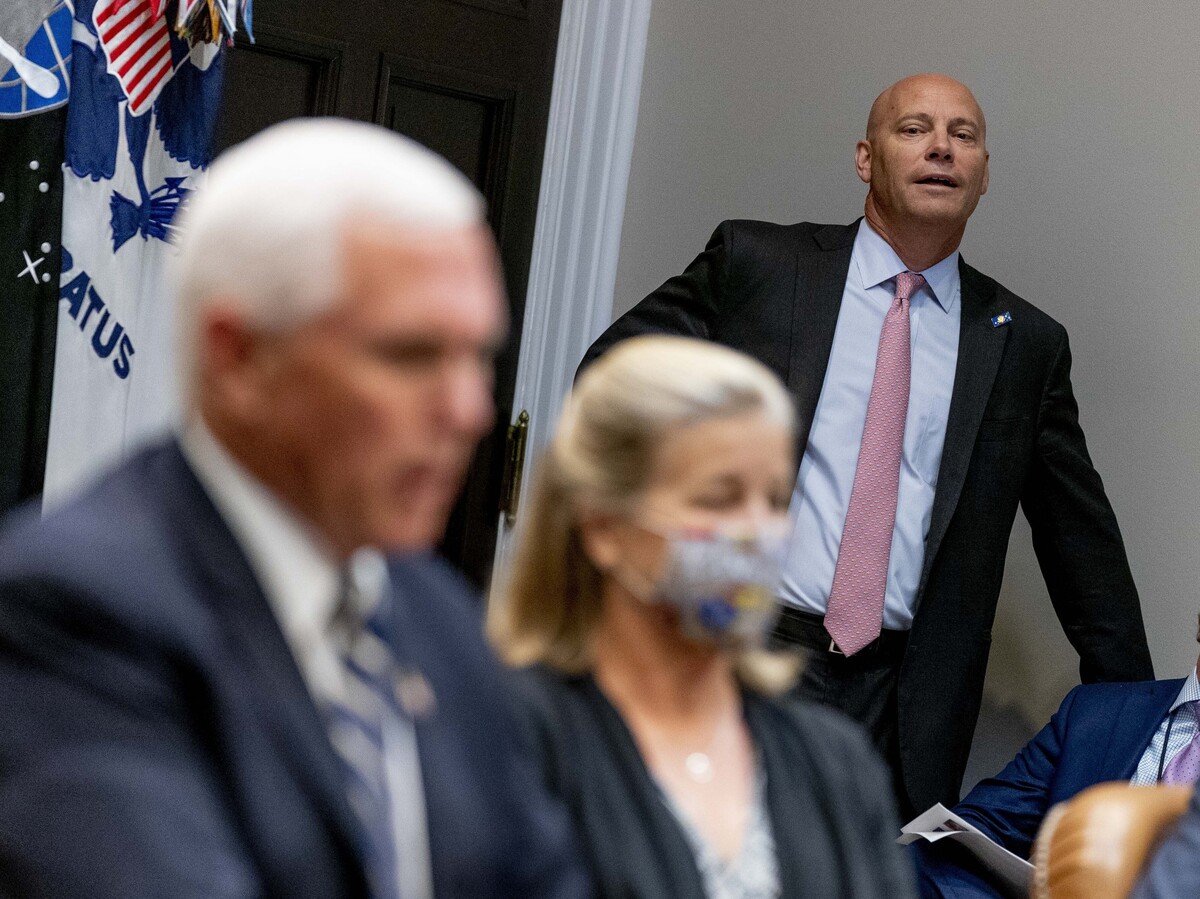 Marc Short, the chief of staff to Vice President Pence, listens to Pence speak during a White House event in September. Short tested positive for the coronavirus on Saturday.

With eight days until Election Day, the White House again faces the coronavirus in its ranks and controversy over its national strategy for the pandemic, after President Trump's chief of staff said the administration would not control the spread of the disease.

Two top advisers to Vice President Pence have tested positive for the virus in recent days, as Pence — who tested negative on Saturday and Sunday — crisscrosses the country for rallies in swing states.

Marc Short, Pence's chief of staff, tested positive for the coronavirus on Saturday.

Marty Obst, a Pence political adviser, has also tested positive for the virus, according to a person familiar with the matter who asked for anonymity on Sunday to discuss Obst's health.

Other news outlets have reported that three additional Pence aides tested positive in recent days; NPR has not confirmed those reports.

The White House says Pence will continue to campaign. On Sunday, he traveled to North Carolina for a rally. His wife, Karen, who also tested negative for the coronavirus on Sunday, is slated to travel to the state for a campaign event on Monday.

Short did not travel with Pence on Saturday to rallies in Lakeland and Tallahassee, Fla. Spokesman Devin O'Malley said Short "began quarantine" on Saturday and was "assisting in the contact tracing process." Aides deemed to have had close contact with Short were pulled from the trip before departure, White House reporters who traveled with Pence were later told.

But Pence — who is considered to have had close contact with his most senior adviser — decided to "maintain his schedule in accordance with the CDC guidelines for essential personnel," O'Malley said in a statement, noting that Pence had consulted with White House physicians.

The Centers for Disease Control and Prevention's guidelines for essential workers who have had close contact with an infected person include wearing a mask for 14 days "at all times while in the workplace."

Pence did not wear a mask at his outdoor rally.

Asked by CNN on Sunday whether Pence should continue to campaign, White House chief of staff Mark Meadows said: "Essential personnel, whether it's the vice president of the United States or anyone else, has to continue on."

Meadows added that Pence wears a mask on the campaign trail except for when he speaks on camera.

"We're not going to control the pandemic"

Jake Tapper: “Why aren’t we going to get control of the pandemic?”

Meadows: “Because it is a contagious virus” #CNNSOTU pic.twitter.com/1ahyatu6co

The Trump administration's handling of the pandemic has been the central issue in the presidential race. More than 224,000 people have died from the virus in the United States, and more than 8 million people have been infected. Cases have been surging recently, and daily new case levels hit a record high on Friday. Millions of people have been thrown out of work because of shutdowns and other changes forced by the pandemic.

Trump, who had the virus and was hospitalized this month, has insisted that the country has rounded the corner on the pandemic.

Asked about surging cases in Wisconsin — one of three states Trump visited for rallies on Saturday — he bristled and said most people who get the virus recover.

"You know why there are so many cases? Because we test," he said. "You're trying to scare people. Don't scare people."

Neither Trump nor his aides mentioned Short's diagnosis on Saturday as the president went to rallies in North Carolina, Ohio and Wisconsin. Upon landing after midnight, Trump told reporters that he had "just now" heard about Short's diagnosis. "I think he's quarantining," Trump said. "He's going to be fine."

Pence, who is the head of the White House's coronavirus task force, did not comment on Short's diagnosis on Saturday. In his second rally in Tallahassee, Pence didn't discuss the coronavirus until midway through his 50-minute speech, lauding Trump for his actions.

"Until that day that we have a vaccine available, we're going to keep working to slow the spread," Pence said. "We're all going to do our part to protect the vulnerable, to save lives."

His office said late Saturday that he would travel to a rally in Kinston, N.C., on Sunday, and the campaign has also scheduled him for a rally in Hibbing, Minn., on Monday. On Tuesday, he is slated for rallies in Greensboro and Wilmington, N.C., and Greenville, S.C.

Democratic vice presidential nominee Sen. Kamala Harris was asked by reporters Sunday morning whether Pence should suspend his travel, as Harris herself did in mid-October when two people near her tested positive for the virus.

"He should be following the guidelines," Harris said. "I think we have modeled the right and good behavior and they should take our lead."

"The grim reality is that we continue to set records for new cases," Biden said, "and the fact that the head of the White House's coronavirus task force has an outbreak in his office and yet still refuses to follow CDC guidelines shows us exactly why."

Trump has sought to make his recovery from the virus an asset on the campaign trail after the White House had its own "superspreader event" last month. More than a dozen people got the virus, including Trump; first lady Melania Trump; their teenage son, Barron; campaign manager Bill Stepien; press secretary Kayleigh McEnany; and adviser Hope Hicks. Trump has said their experience shows people can recover.

But polls show most Americans disapprove of how Trump has handled the pandemic. By a 71%-to-26% margin, likely voters view the coronavirus as a "real threat," though a significant portion of Republicans view it as being blown out of proportion, according to an NPR/PBS NewsHour/Marist poll.

The poll showed that only 36% of likely voters said they trust what Trump says about the virus a great deal or a good amount, and most said they would prefer Biden to handle the issue.

The White House has refused to say how many staff members have contracted the virus in total. Medical experts have said the large number of White House cases show how lax Trump and officials have been in taking steps to stop the spread of the virus, including wearing masks and staying at least 6 feet away from other people — and how they've relied too much on testing.

An earlier version of this story incorrectly said Pence is scheduled to appear on Monday at rallies in Kinston, N.C., and Hibbing, Minn. The rally in Kinston is slated for Sunday, while the rally in Hibbing is on Monday.