Accessibility links
Trump Rallies Like It's 2016 In Last Days Of 2020 Campaign The rallies, the crowd and the theatrics at each stop are straight out of Trump's 2016 playbook as the president casts himself as the upstart outsider fighting against the odds. 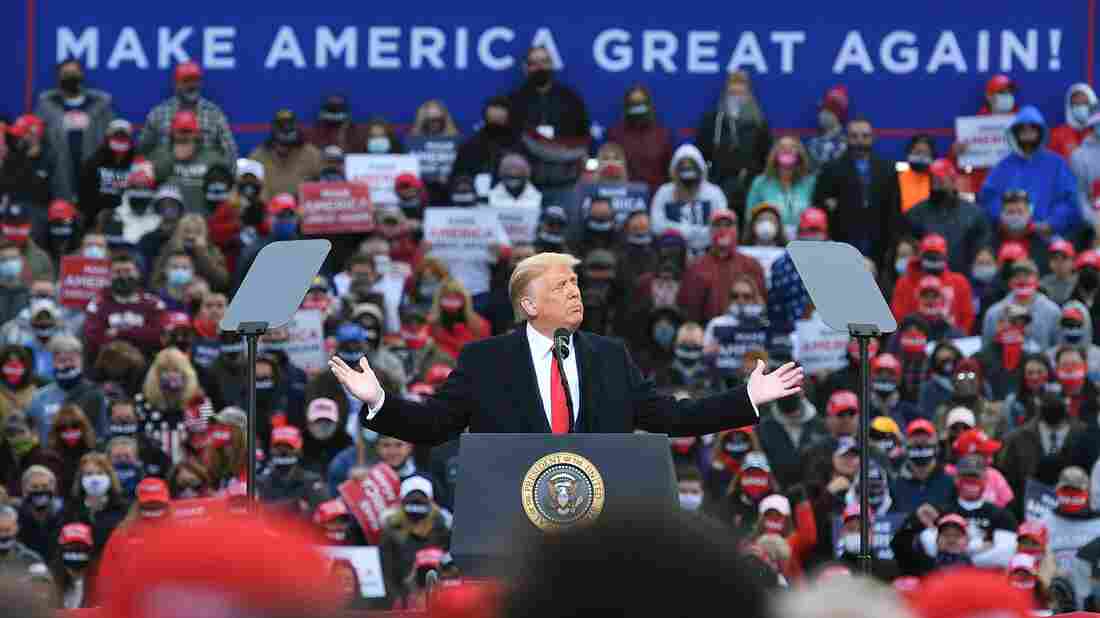 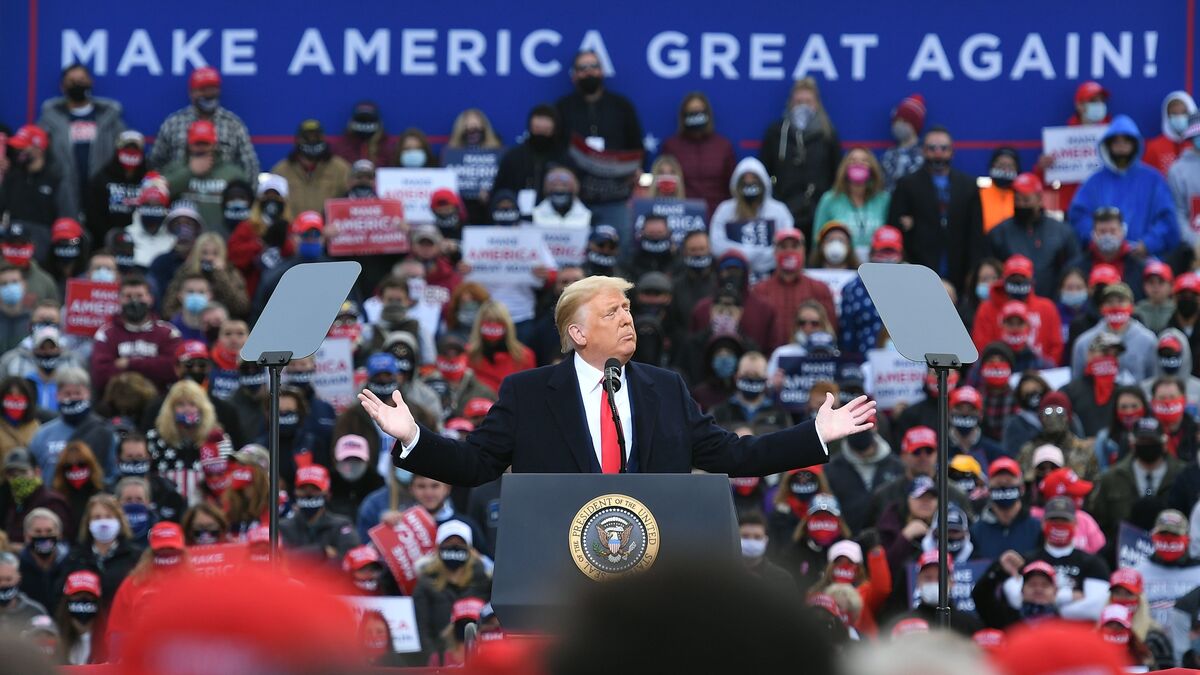 President Trump holds a rally in Londonderry, N.H., on Sunday.

Hope Hicks, one of President Trump's closest aides, threw up her hands up into the shape of a "Y" as she danced her way back to the stairs of Air Force One.

Grinning to her left was Trump campaign adviser David Bossie, who was breaking out the same moves — albeit with less precision — as the disco beat for the Village People anthem "YMCA" pounded over the sound system on the tarmac in Pensacola, Fla.

It was a moment of joy for the duo — both key players during Trump's first run for office who were brought back to help try to repeat the come-from-behind win of 2016 as he takes on his Democratic challenger, former Vice President Joe Biden. 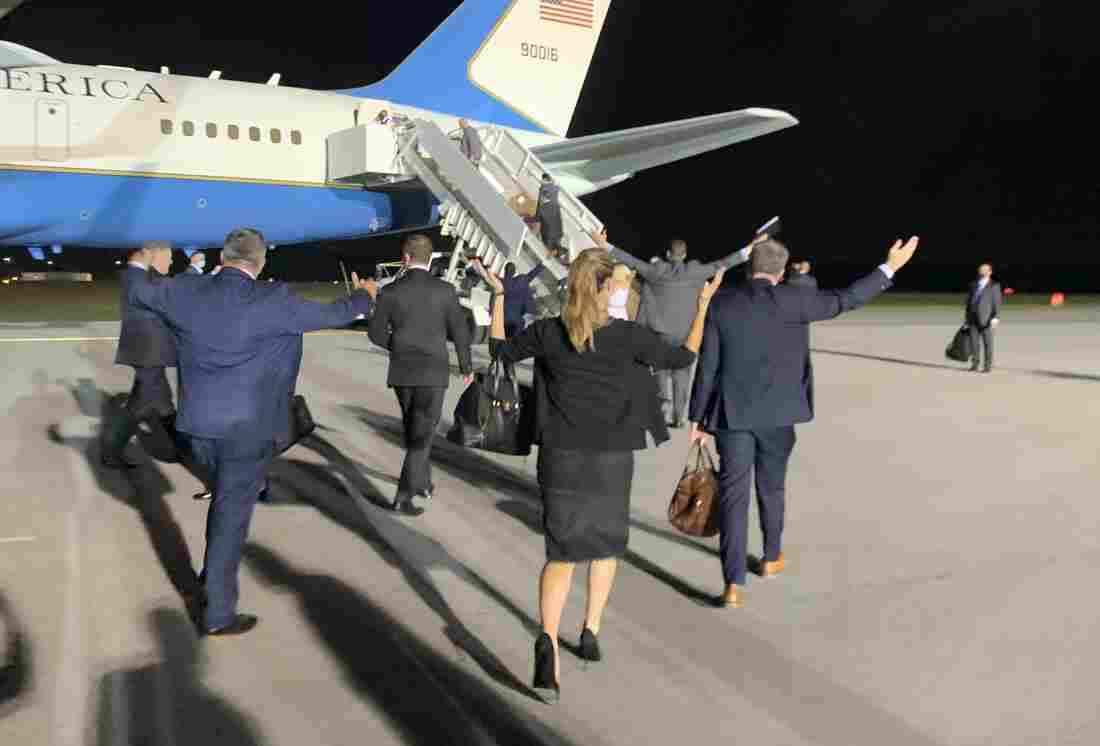 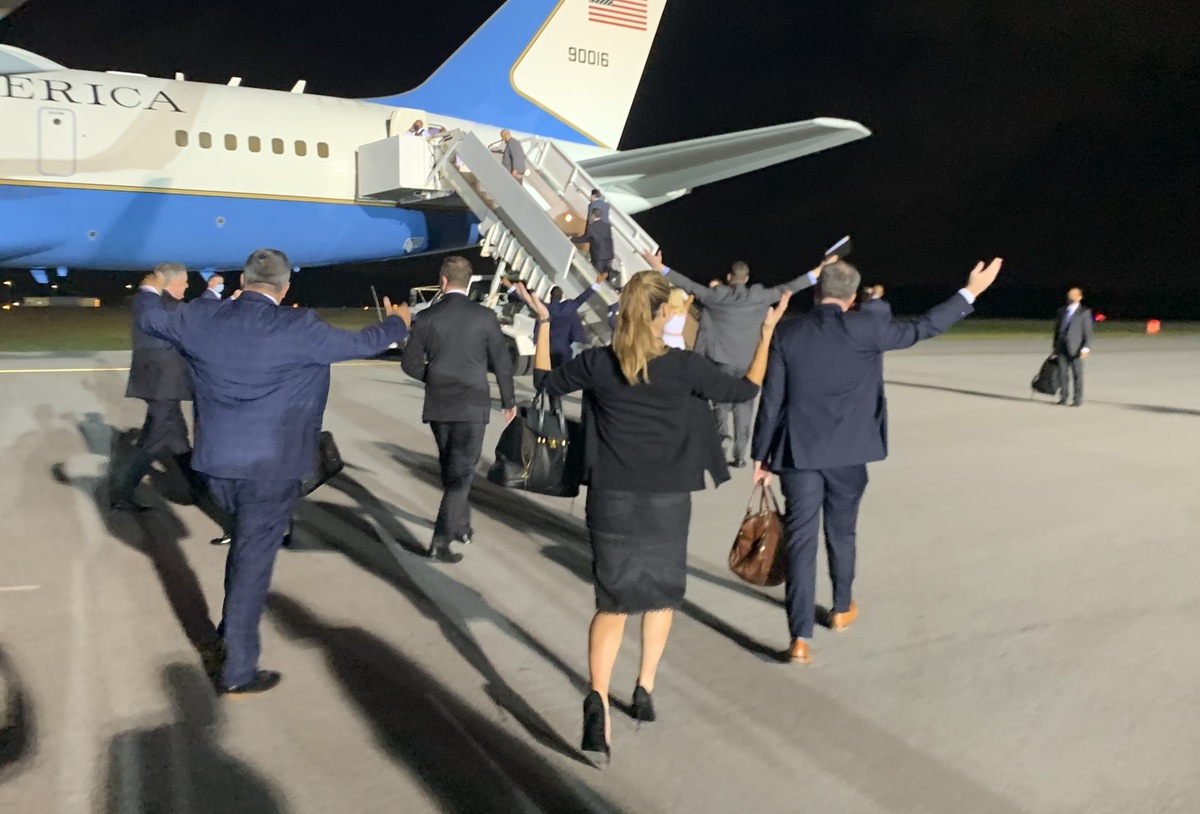 Trump is behind in the polls in a race where the coronavirus pandemic — and his administration's failure to contain it — has been the central campaign issue.

It has shaped the way people are voting, prompting millions of Americans to vote early or mail in their ballots.

And the pandemic has threatened Trump and the people around him, with the virus taking Trump and various key players off the trail for days at a time.

Close aides to Vice President Pence are the latest people to test positive for the coronavirus, though Pence himself plans to keep campaigning.

But Trump wasn't talking about that on his six-state sprint this weekend across critical states his campaign thinks he could still win to find a path to victory.

Instead, the president was dialed up for high-voltage enthusiasm and optimism that his campaign hopes will motivate supporters to get out to the polls and keep Trump in the White House for another four years.

Trump plans a breakneck pace of rallies in the remaining week of the race — rallies capped off by "YMCA," where Trump himself dusts off some of his own awkward dance moves, boxing with his fists in front of his chest.

"I think we're winning," Trump insisted to reporters as he chatted them up on a Friday night flight to Palm Beach, Fla. "We're winning by a lot."

The rallies, the crowd and the theatrics are straight out of his 2016 playbook. But after nearly four years in office, he's no longer the outsider, and is being judged on his handling of a pandemic that has killed 225,000 Americans and continues to disrupt daily life.

In Waukesha, Wis., thousands of supporters came out to his Saturday night rally, despite surging coronavirus cases in the state. Trump told them he feels better now, after being hospitalized for COVID-19, than he did before.

"I wake up the next morning and I feel like Superman," he said. "I ripped my shirt off. We gotta go!"

On Sunday, at a rally in Londonderry, N.H., after Trump told the crowd about his bout with the virus, supporters chanted, "Super Trump! Super Trump!"

His rallies have been moved outdoors, where his screaming supporters pack themselves tightly together, most of them not wearing masks. In the Florida retirement community The Villages, there were dueling Uncle Sams, dancing for the president's attention, and in North Carolina, there was a group of women who have followed Trump to all his rallies across the Tar Heel State. 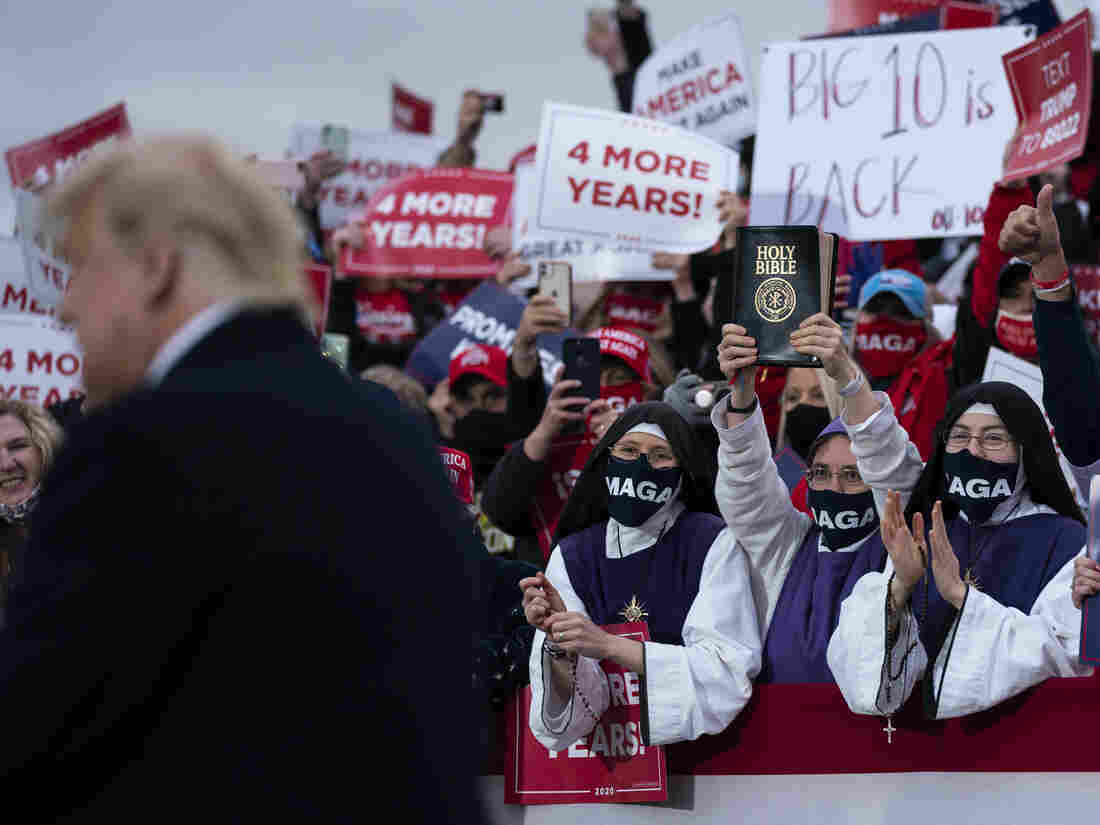 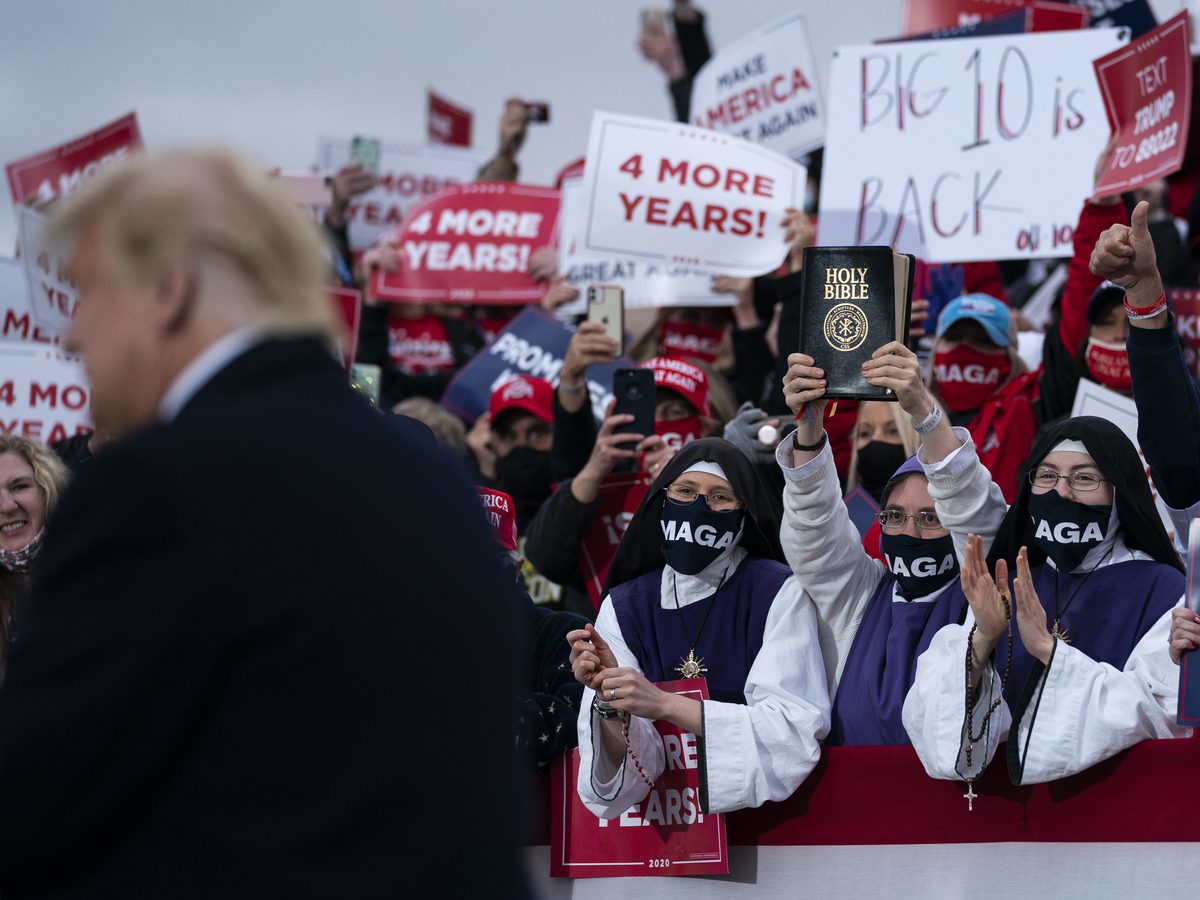 Nuns in the front row of Trump's Saturday rally in Circleville, Ohio.

In Circleville, Ohio, a group of nuns pumped their Bibles in the air when Trump looked up to the sky and thanked divine intervention for a controversy — fueled largely by Trump himself — over the past business activities of Biden's son, Hunter. "It's amazing the way God works," Trump said.

Trump points to the raucous crowds as proof that he's winning. Someone who draws so many people can't be running in second place, he argues.

He repeatedly mocks Biden for speeches where supporters sit in socially distanced circles, or gather in pickup trucks and cars at drive-in rallies — events designed to prevent spreading the coronavirus, and that reinforce Biden's central argument that Trump has failed to handle the pandemic.

"There were so few cars. I've never seen an audience like that," Trump told his Saturday rally in Lumberton, N.C. "It was a tiny, tiny little crowd. You could hear the cars — honk... honk."

"Is there any place better to be than a Trump rally?" Trump said. "I mean seriously, right? ... We have fun." 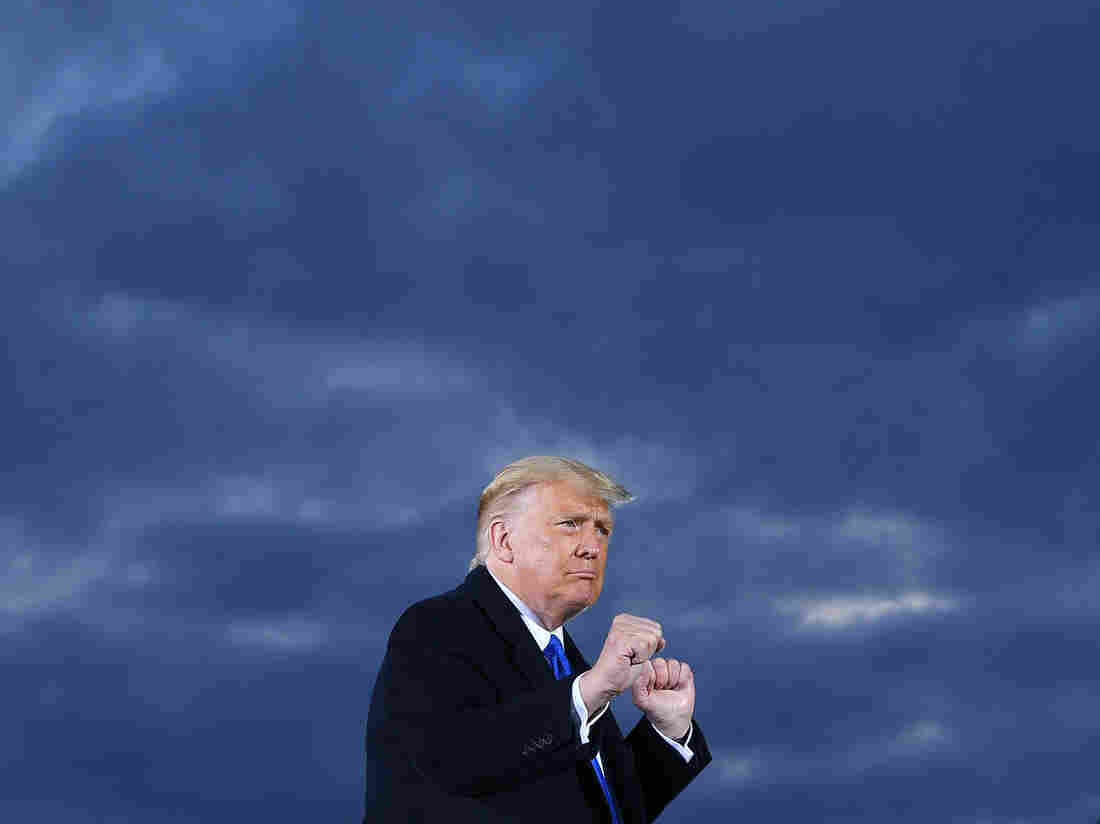 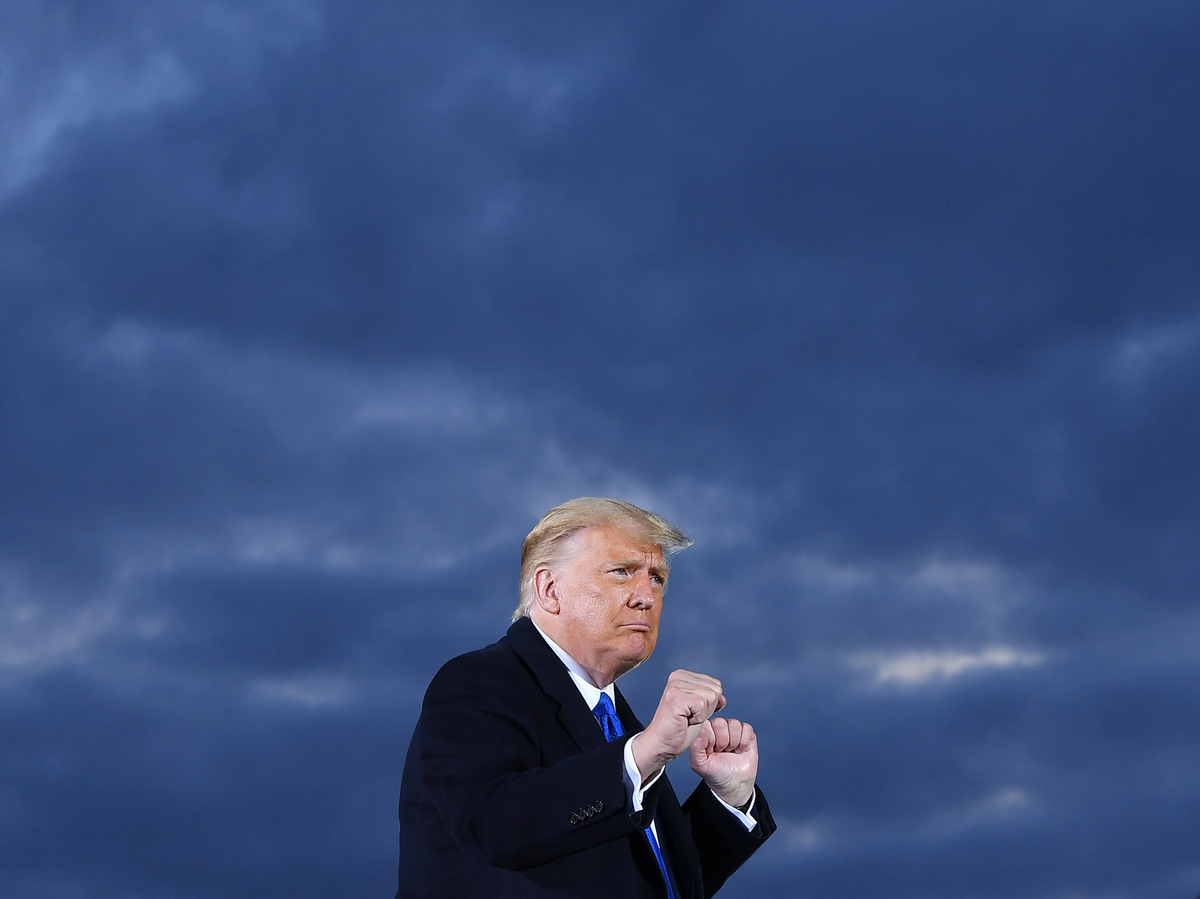 Trump dances after his campaign rally at Pickaway Agriculture and Event Center in Circleville, Ohio, on Saturday.