Accessibility links
Pope Francis Names Wilton Gregory As First African-American Cardinal Wilton Gregory, the archbishop of Washington, D.C., is among 13 church leaders who will be elevated to cardinal at a ceremony at the Vatican next month. 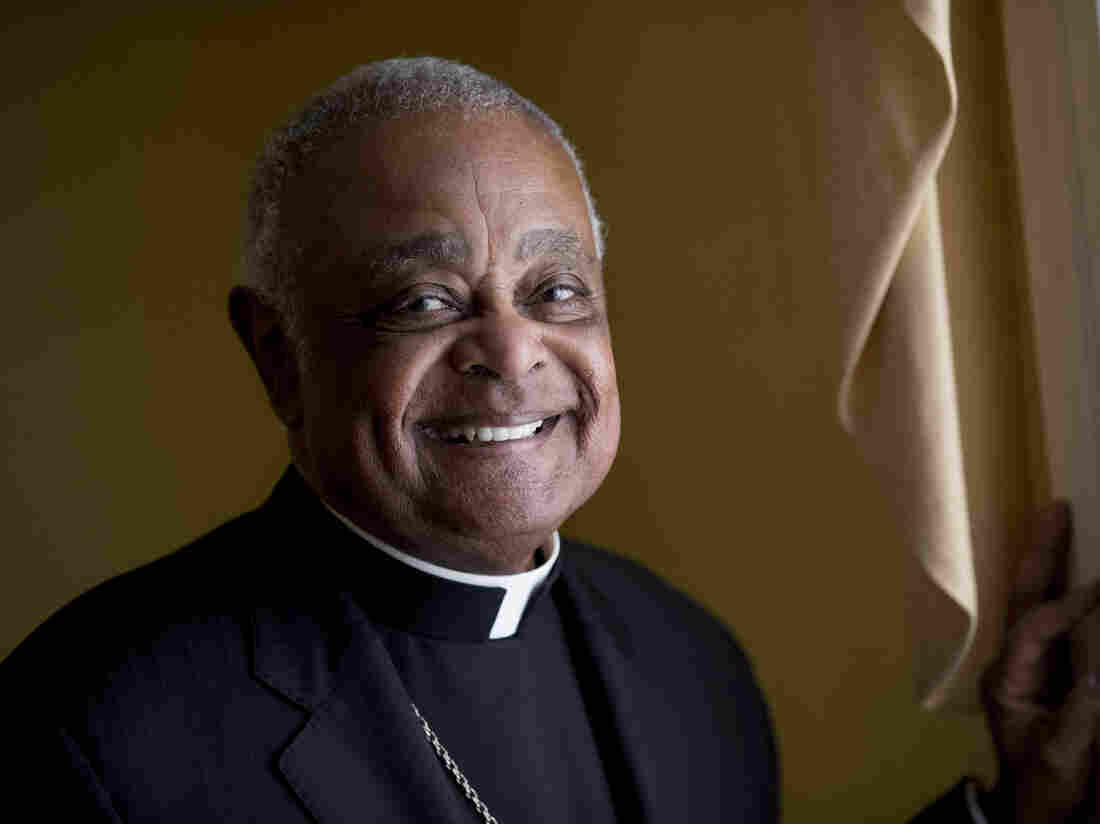 Catholics in the United States will get their first African-American cardinal next month. In a surprise announcement Sunday from his window overlooking St. Peter's Square, Pope Francis named Wilton Gregory, the archbishop of Washington, D.C., among 13 new cardinals.

Gregory will be elevated to the position in a ceremony at the Vatican on Nov. 28.

"With a very grateful and humble heart, I thank Pope Francis for this appointment which will allow me to work more closely with him in caring for Christ's Church," Gregory said in a statement.

Gregory, 72, has served in many high-profile positions within the church. When he was elected president of the U.S. Conference of Catholic Bishops in 2001, he became the first African-American to hold the office. At the time, he said he considered his election "an expression of the love of the Catholic Church for people of color," adding that he hoped it would inspire those Black people who are "lukewarm in their faith" to renew their commitment to the church.

It was during Gregory's tenure that bishops adopted a "Charter for the Protection of Children and Young People" to address the growing sexual abuse scandal throughout the church.

Gregory, one of the country's most high-profile African American church officials, hasn't been afraid to publicly wade into potentially controversial issues.

"You cannot be a Catholic and sit on the sidelines," he told young adult Catholics at a "Theology on Tap" gathering last year. "To be a member of the Church means you've got to get in and get your hands dirty in the mix of the whole arena of faith from what we believe and profess to how we live and treat one another."

After George Floyd was killed at the hands of Minneapolis police officers in May, Gregory was forceful in his denunciation of the police.

"Many of us remember similar incidents in our history that accompanied the Civil Rights Movement, where we repeatedly saw Black Americans viciously brutalized by police on television and in newspaper photos," Gregory said at the time. "The horror of George Floyd's death, like all acts of racism, hurts all of us in the Body of Christ since we are each made in the image and likeness of God, and deserve the dignity that comes with that existence."

And when the president attended the St. John Paul II National Shrine in June — just a day after demonstrators were tear-gassed in order to make way for a photo op by the president at a church across from the White House — Gregory did not hold back.

"I find it baffling and reprehensible that any Catholic facility would allow itself to be so egregiously misused and manipulated in a fashion that violates our religious principles, which call us to defend the rights of all people, even those with whom we disagree," he said.

"Saint Pope John Paul II was an ardent defender of the rights and dignity of human beings," Gregory added. "His legacy bears vivid witness to that truth. He certainly would not condone the use of tear gas and other deterrents to silence, scatter or intimidate them for a photo opportunity in front of a place of worship and peace."

Gregory began his church career as a priest for the Archdiocese of Chicago in 1973. Ten years later he was ordained an auxiliary bishop, and by 2005 he had become archbishop of Atlanta. In 2019 he was appointed as archbishop of Washington after Cardinal Donald Wuerl resigned after being accused of covering up sexual abuse scandals during his tenure as the bishop of Pittsburgh.

Nine of the 13 new cardinals are under 80 years old, which means they will be eligible to vote for Francis' successor. Pope Francis has now appointed almost 60% of cardinal electors, raising the likelihood that his eventual successor will be in line with his own policies.

Sylvia Poggioli contributed to this report.