Accessibility links
Single Moms Are Struggling Without Enough Help In Pandemic Many single parents collecting unemployment benefits are running out of money to pay rent, with Congress still unable to pass a relief bill to help. 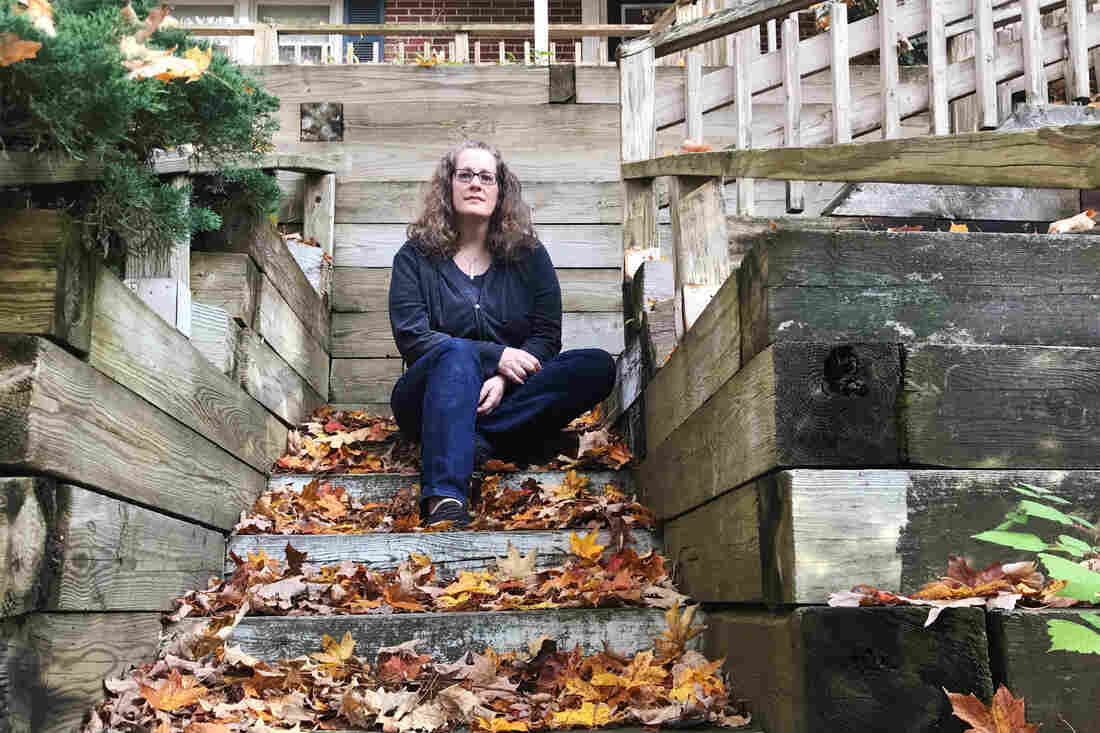 Nellie Riether, whose kids are 13 and 15, has to decide whether to start spending her retirement savings or uproot her family from the house they're renting and move in with her sister. Sarah Riether hide caption 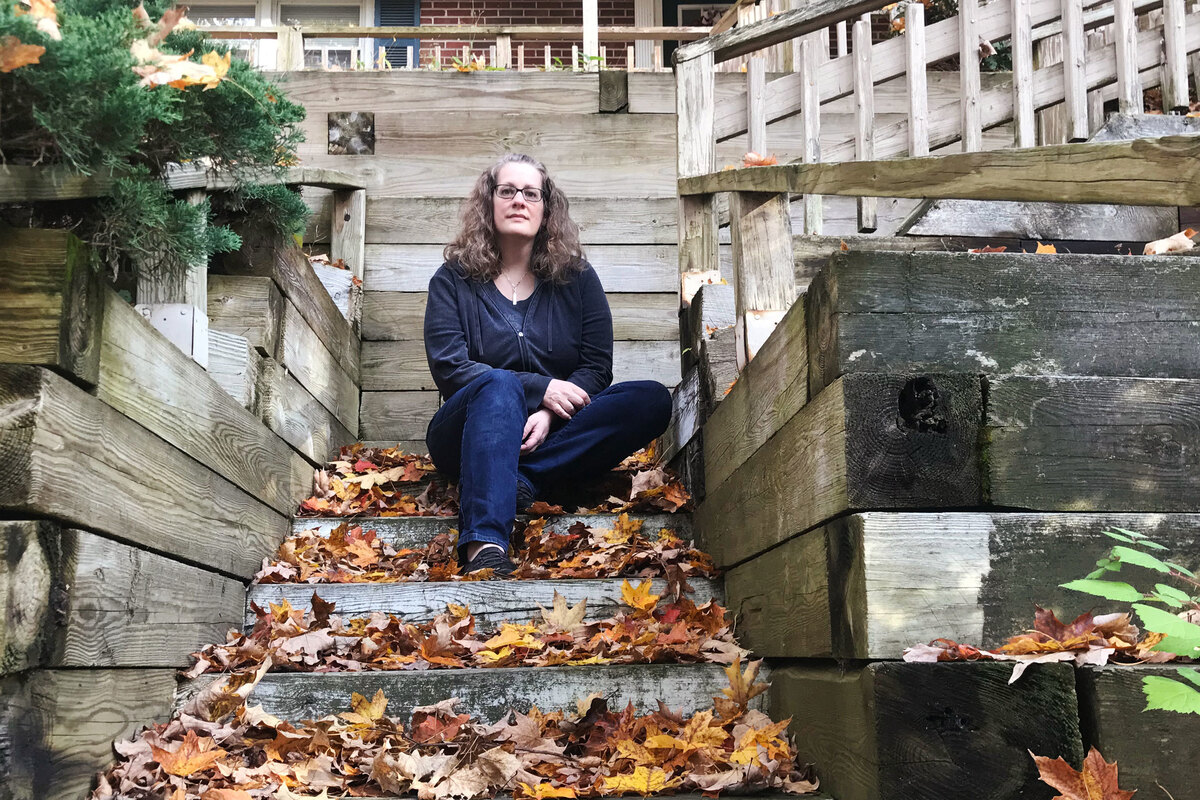 Nellie Riether, whose kids are 13 and 15, has to decide whether to start spending her retirement savings or uproot her family from the house they're renting and move in with her sister.

Nellie Riether, a single mom from Ringwood, N.J., faces a stark choice: raid her retirement savings or uproot her kids from home and move in with her sister.

"To be honest, it's mortifying and embarrassing at 46 years old to say I'm going to have to move in with my sister," she says. "Emotionally, it's a bit of a failure."

Riether has been out of work since April, when she was furloughed from her job in office building design. She can't pay the rent much longer, and she's worried about her kids, who are 13 and 15.

The state jobless benefits she receives don't even cover her rent, let alone her car payment, insurance and food. And she's frustrated that Congress couldn't figure out a compromise months ago to send more help in the middle of a national emergency.

"This is beyond politics — this is people's lives," says Riether. "This is my life. This is my family's life. We need a stimulus package."

A lot of people need help in the pandemic, but especially single mothers. There are approximately 13.6 million single parents in the U.S., raising 22.4 million children. Eighty percent of those single parents are moms. Women have lost more jobs than men during the recession, and others are quitting their jobs in frustration from the demands of child care. However, quitting is just not an option for most single parents.

For Riether, not having a partner to share the financial burden is just part of her predicament. There's no partner to talk to. And it's difficult to bring up with friends what she's going through.

"I mean, I don't want to burden other people with, 'Well, I'm going to lose my home and be homeless,' " Riether says. 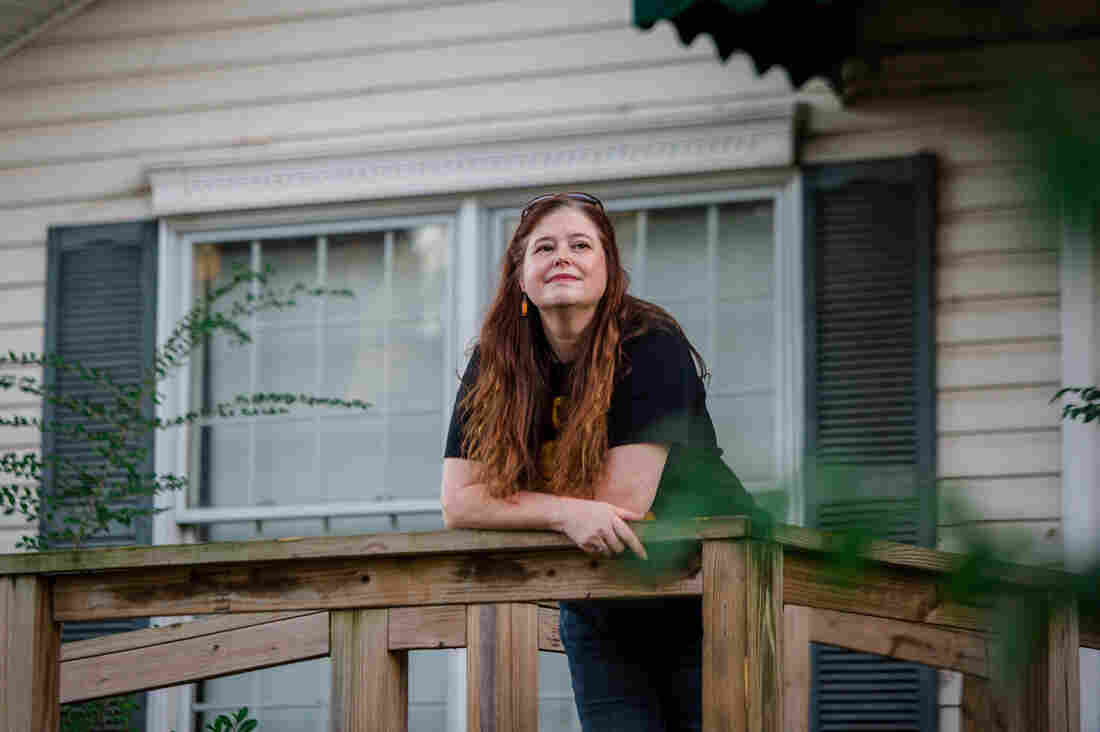 Ellen Griffin is a single mom with two kids in Birmingham, Ala. Tamika Moore for NPR hide caption 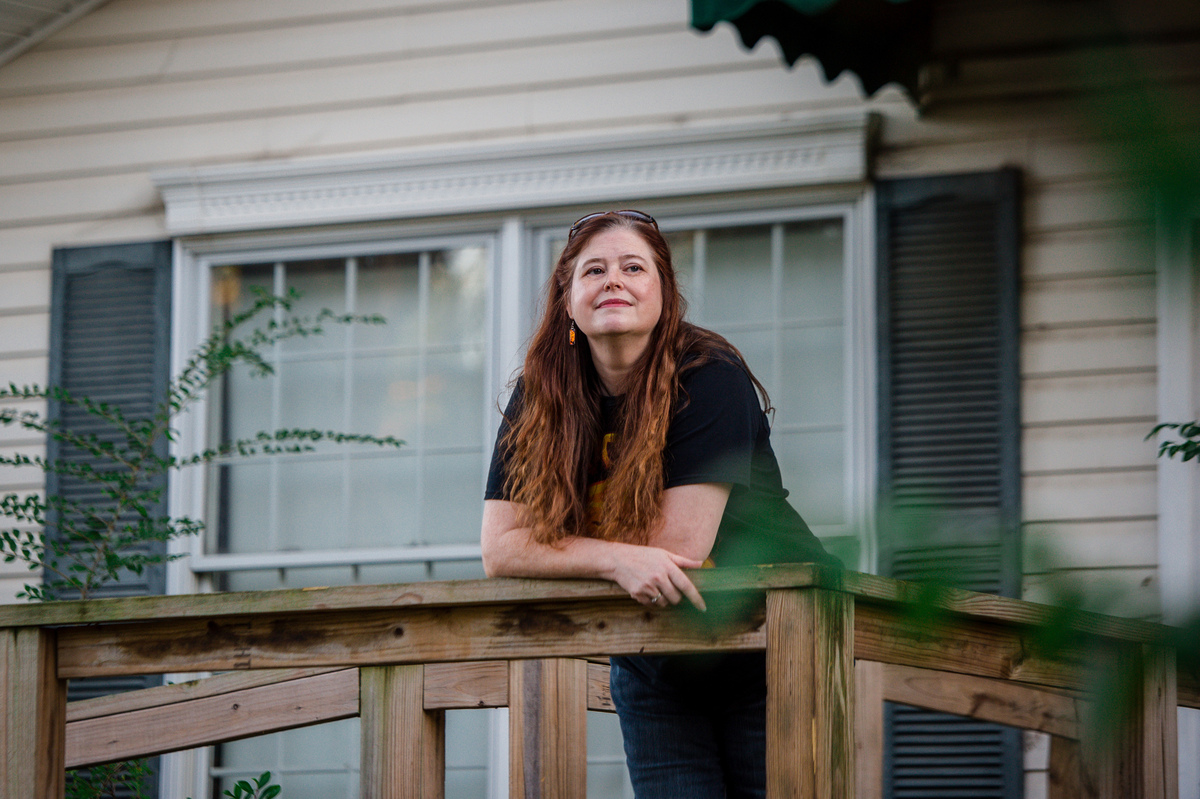 Ellen Griffin is a single mom with two kids in Birmingham, Ala.

It's a common fear for single moms who've lost their jobs and are watching their savings dwindle away — moms like Deborah, who got laid off in May from her public relations job with an entertainment company in Los Angeles. (She doesn't want her last name used because she doesn't want to hurt her chances of finding work.) Deborah says she has been looking hard for a job but nothing has come through. In the meantime, the rent will be due soon, and she's not sure how she'll pay it. She hasn't talked about that with her daughter. 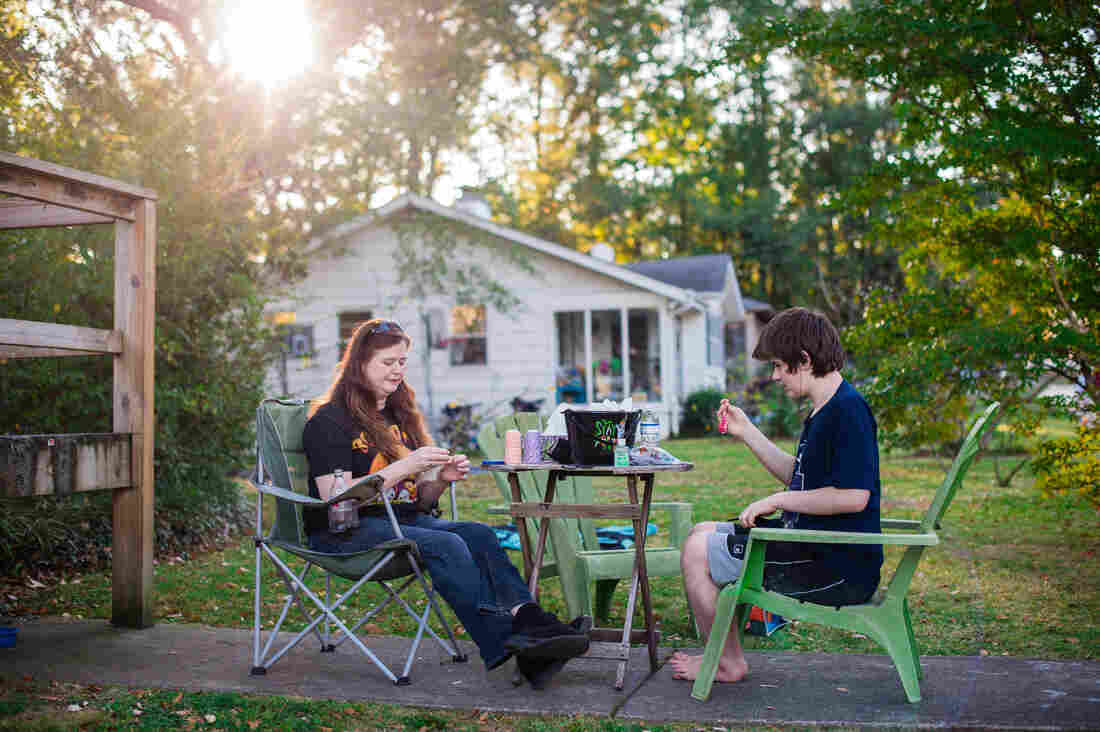 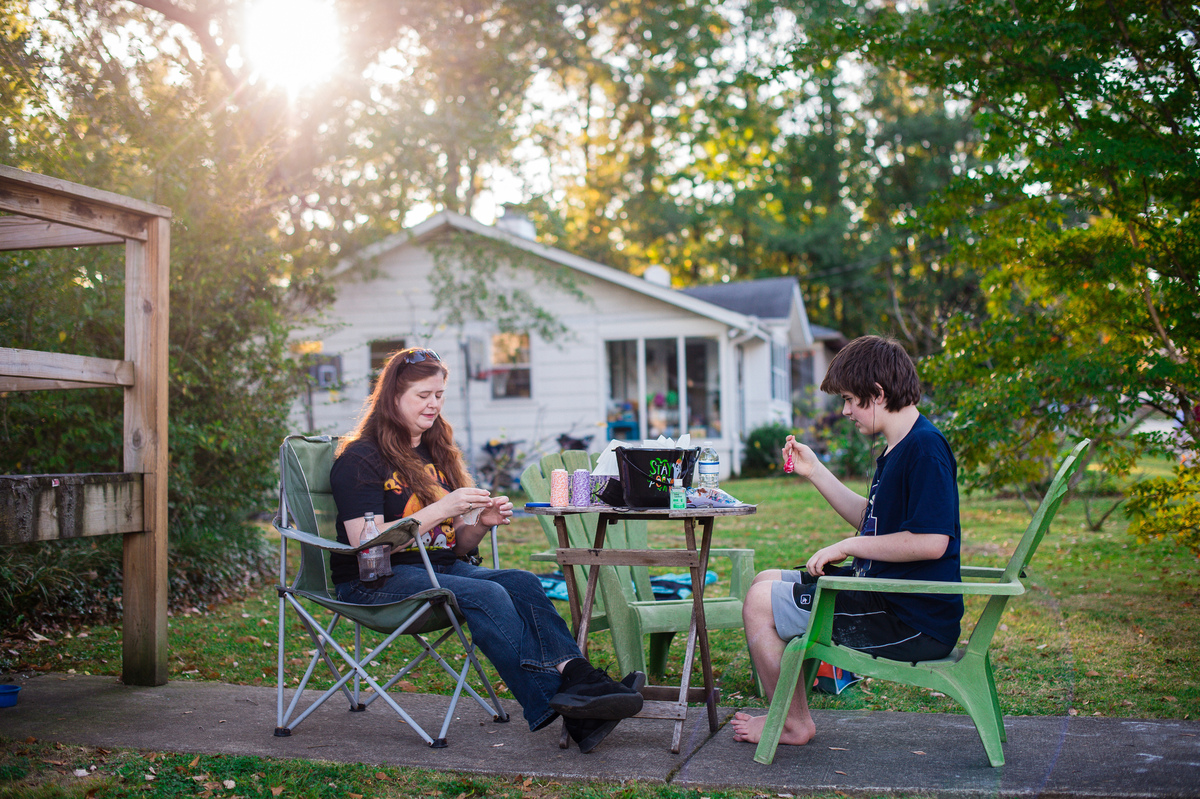 Griffin and her oldest son, Griffin Shade, 13, make Halloween treats outside their home.

"I mean, she's 7. I want her to make sure she keeps her innocence," Deborah says. "I want her to just think the world is all rainbows."

But for single moms relying on unemployment money and unable to find a job, the world is anything but rainbows right now. It has been nearly three months since an extra $600 a week in federal unemployment benefits expired. State benefits often aren't enough to cover rent and other bills. And economists say many people are depleting their savings.

For single moms who are working, many feel fortunate to have a job, but between juggling remote school and housework, there's never enough time. "I'm always kind of half-awake," says Ellen Griffin, with an exhausted-sounding laugh. "Last night I think it was 2 before I fell asleep, and then [I was] up at 6."

Griffin is a single mom in Birmingham, Ala., where she works at a public library. She has two kids, 10 and 13. Before she gets to work at 8 a.m., she needs to get her older son set up for remote school at her father's house. He's 90 years old. 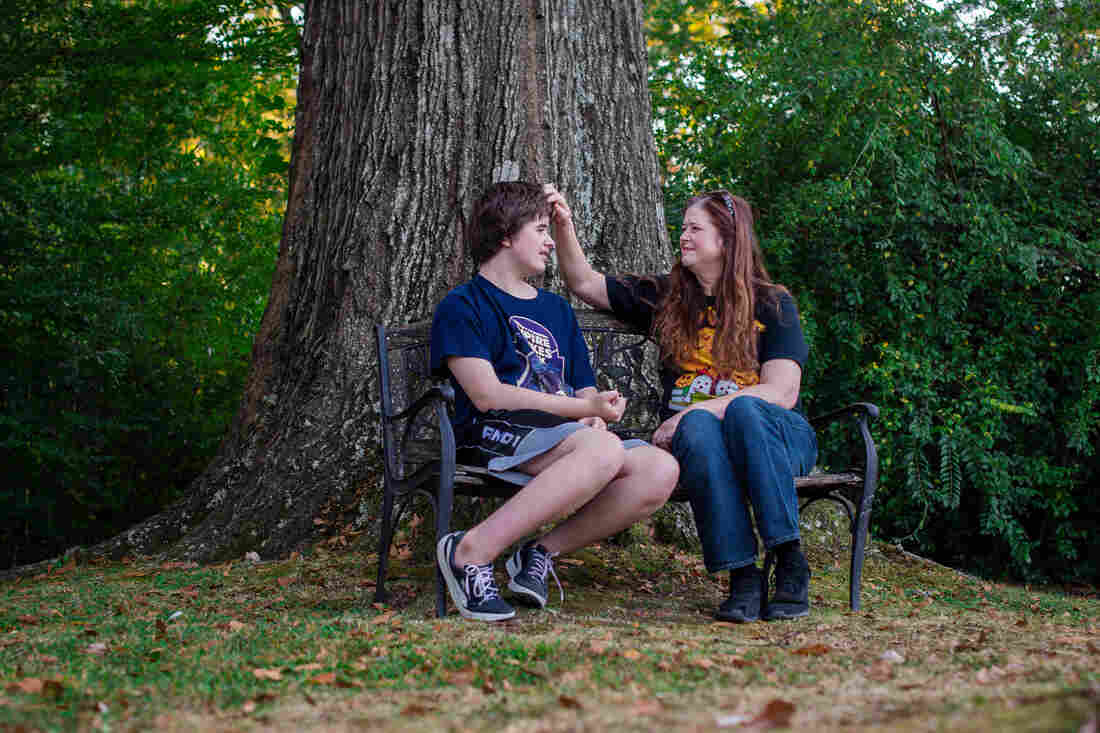 Ellen Griffin sits with her oldest son outside her home. Tamika Moore for NPR hide caption 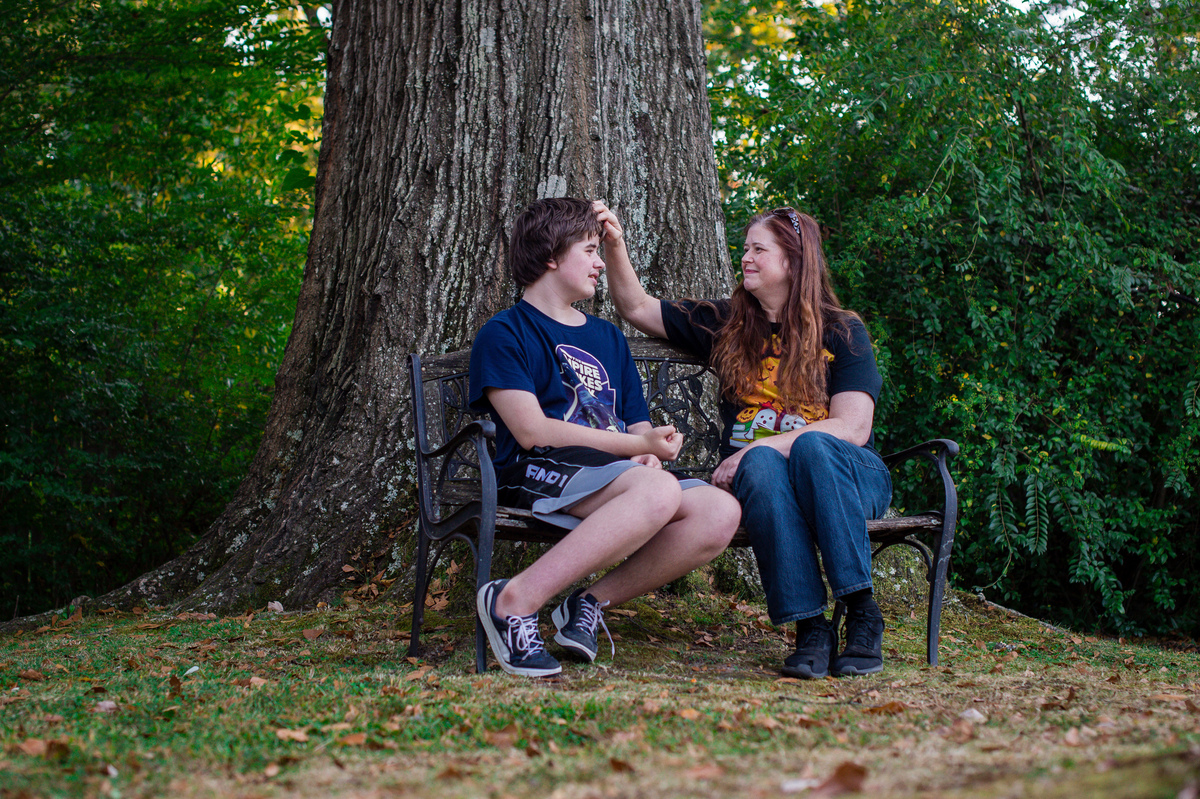 Ellen Griffin sits with her oldest son outside her home.

Her younger son, Drake, needs more attention because of his autism. She shuttles him to school every morning. Then there's speech therapy in another location. At the library, more than half the staff has been furloughed, so she's doing extra work — running books in bags out for curbside pickup, while wearing a mask.

"It's like Tetris," she says, "trying to fix all the pieces so everything is covered."