Accessibility links
Trump-Biden Final Campaign Week: What To Watch For The home stretch of a presidential campaign is anxiety-producing. But there are some clues for how the race might be going, from where the candidates travel to early vote totals. 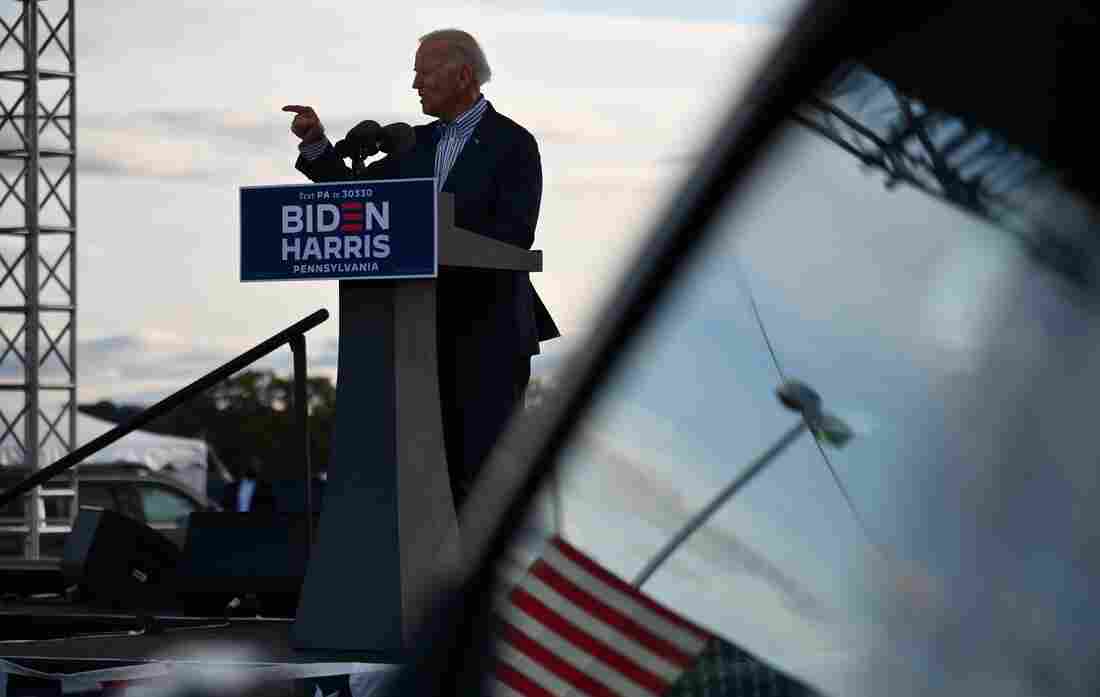 Democratic presidential nominee Joe Biden speaks at a drive-in rally at Dallas High School in Dallas, Pa., on Saturday. Pennsylvania is a crucial state, with both Biden and President Trump having visited in recent days. Angela Weiss/AFP via Getty Images hide caption 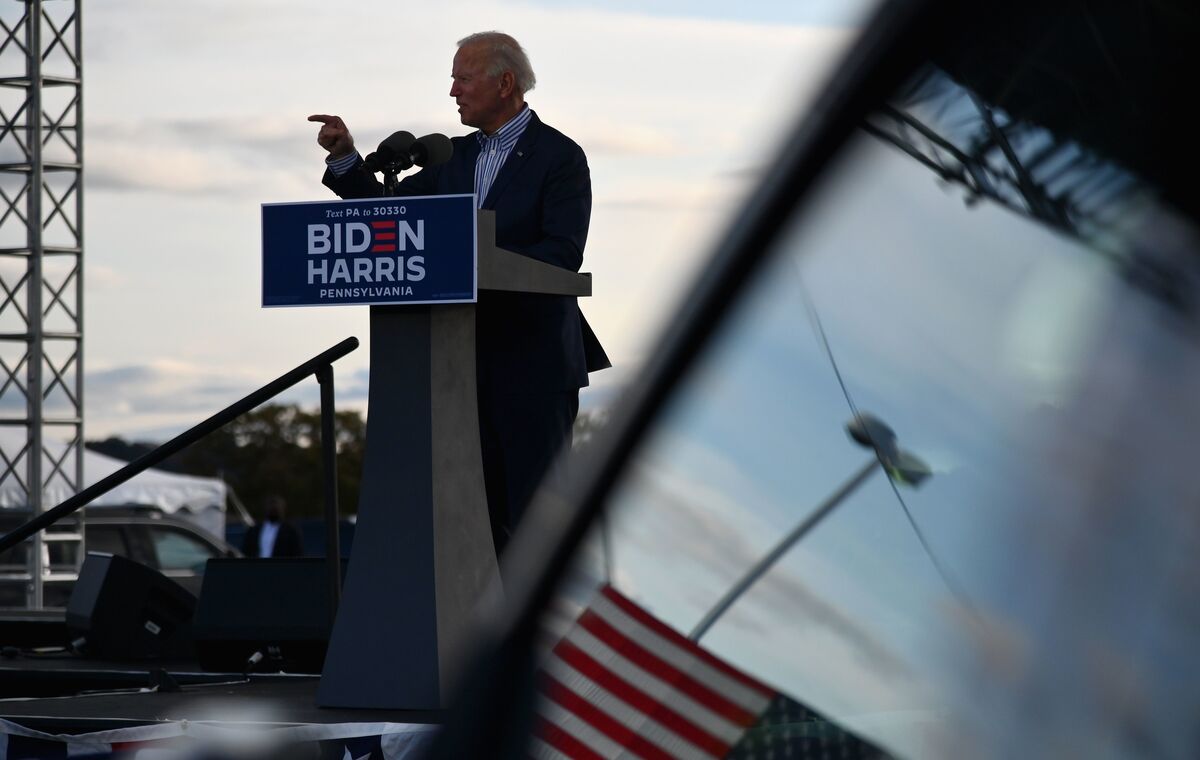 Democratic presidential nominee Joe Biden speaks at a drive-in rally at Dallas High School in Dallas, Pa., on Saturday. Pennsylvania is a crucial state, with both Biden and President Trump having visited in recent days.

The home stretch of a presidential campaign can be warping.

"In this final phase, the feedback loop inside a campaign can become really distorted," said Brian Jones, a Republican strategist and veteran of the Mitt Romney, John McCain and George W. Bush campaigns. "Campaigns destined for defeat find ways to believe there's still a chance and campaigns headed for victory can be overly nervous."

Campaigns, candidates and, most importantly, voters are all in a holding pattern and looking for small things to cling to — or worry about. And the coronavirus pandemic, which has introduced a new, difficult-to-quantify variable in the outcome of the election, only makes matters more anxiety-producing.

Here are five things to watch that can give some signs of where things are headed:

1. Where the campaigns are investing

Where campaigns decide to spend their time and money tells you a lot about what locations they think are most important.

The campaigns have spent the lion's share of their television ad money in six big states: Florida, Pennsylvania, North Carolina, Michigan, Wisconsin and Arizona. About $9 out of every $10 spent on TV — about $1 billion in total — has been put into those six places.

Despite President Trump's head start campaigning, Democratic nominee Joe Biden and groups supporting him have far outspent Trump and allies in those states. That makes things difficult for Trump, because he won all six of those states in 2016 and because Florida and Pennsylvania in particular are vital to his reelection chances.

Strategists on both sides of the aisle, though, will tell you that there's no more valuable and limited asset in a campaign than the candidate's time. And where a candidate goes can have a marginal positive effect on the result.

In the past week or so, Biden has visited North Carolina and Pennsylvania and, so far this week, we know he will be heading to Georgia. At the beginning of this cycle the state was seen as a reach for Biden. Now it very much could go either way.

Trump And Biden Had A Real Debate, And 4 Other Takeaways

In the coming days, Biden's vice presidential nominee, California Sen. Kamala Harris, is going to Nevada and, as NPR has confirmed, Texas, a state that continues to be close. Former President Barack Obama is going back to Florida, where he also was Saturday.

Vice President Pence is headed to Minnesota and North Carolina, as well as South Carolina, where Republican Sen. Lindsey Graham is in a tough reelection fight.

In 2016, we saw a significant tightening between Trump and Hillary Clinton in the final couple of weeks. Does that happen again?

Currently, Biden leads Trump 52% to 43% in an average of the national polls. Biden's top line number has barely budged since effectively winning the Democratic nomination. He hasn't been below 49% since April, and Trump hasn't gotten to 44% since that same month. Biden has been between 49% and 52% on average, while Trump has been between 41% and 44%.

That certainly puts Biden on track to win the national popular vote, but Clinton won that, too, by 3 million votes.

The race is won in the states key to deciding the Electoral College, and there, it's tighter. The Biden campaign has said for months that it expects a contraction and continues to stress that its internal polls show a closer contest in places like Pennsylvania, Michigan and Wisconsin than what is showing up in public surveys.

But that tightening may be starting to appear in public polls. Trump has seen an uptick in the last week in several states. Below is a rundown of where things stand in a dozen states, per 538 averages as of Sunday afternoon and in order of closest to furthest apart:

Bookmark the above margins for comparison to next week to see if the race has moved and to Election Day to see if the polls were right or wrong. 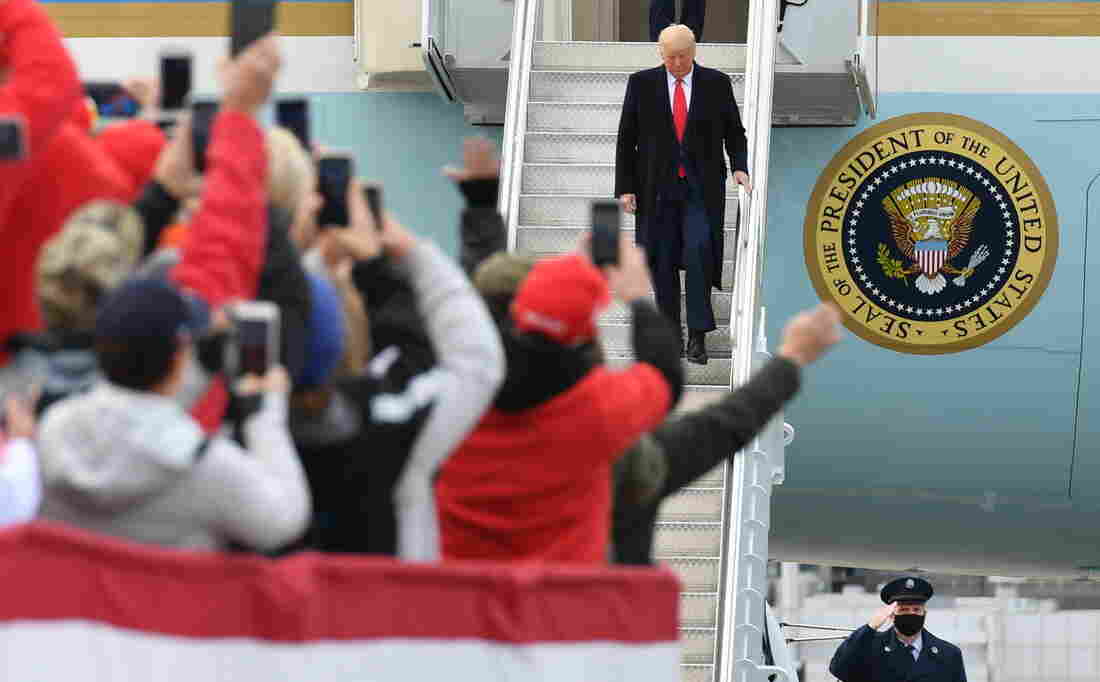 3. How do Senate candidates talk about Trump?

After the first presidential debate, an increasing number of Republicans were separating themselves from Trump, saying they should be elected as a potential check on a Biden presidency.

But after the last debate Thursday, which saw a calmer Trump, Republicans are hoping it reduced some GOP jitteriness in down-ballot races in Republican areas — even if it doesn't help Trump win reelection.

That could make a difference on the margins in places like Alaska, Arizona, Georgia, Kansas, Montana, North Carolina, South Carolina and Texas, for example.

"So much for down-ballot Republicans this year depends on the president's performance," GOP strategist Jones said. "If Trump can remain focused and present a clear contrast message ... that'll help Republicans down ticket even if Trump loses. If the president is focused on conspiracy theories and cheap applause lines ... then it could be a tough election night for Republicans."

The early vote numbers have been breaking records all over the country, but this is a unique year.

So far, according to the U.S. Elections Project, as of Sunday night more than 59 million people had already cast their ballots, or about 43% of the 2016 total. About 40% of the electorate voted early in 2016, and there's still a week to go until Election Day.

Texas, in particular, has seen a whopping surge. Almost 7.2 million people have voted early, or about 80% of the total votes cast in 2016. If Democrats got half those votes, that's almost as many votes as Clinton got in 2016. But a couple of things to keep in mind: Texas wasn't even really contested four years ago, and Trump's total is likely to be higher, too.

Still, the early vote totals in Texas do seem to be a good sign for Democrats. The data firm TargetSmart, which uses voter data beyond party registration to try and model and project turnout, noted in its Saturday newsletter:

"[T]he 2020 early vote electorate is 2% more Democratic than the 2018 electorate, which in the end resulted in a highly competitive US Senate election. This is a good sign for Biden."

Who's turning out in Texas is also notable. TargetSmart flags a significant increase in young voters and Latinos, two strongly Democratic blocs, and a slight decrease in white non-college voters, the core of Trump's base.

If that trend continues more broadly in key states, that's a good indicator for Biden. But Democrats worry about Biden lagging Clinton's margins with young Black men and Latinos.

So far, Biden appears to be more than making up for it by winning over college-educated whites and seniors, two groups that used to lean more Republican. That would certainly be a new coalition for Democrats. We'll see if it holds.

It's always important to keep an open mind that things may not turn out as they appear, especially in this reality distortion field of a year.

We won't know whether the polls are right until votes are counted, and Democrats worry about mail-in ballots being disqualified for technicalities like filling out ballots with the wrong color ink or not signing in the correct place.

Trump had been promising to hit Biden with unverified allegations about his son Hunter. But the attack leveled at the final debate was underwhelming. Do Trump and his campaign have anything else they will try to throw at Biden to try to drag him down and convince the narrow slice of persuadable voters that he's unelectable?

What other surprises does 2020 have up its sleeve?