Accessibility links
Nagorno-Karabakh: U.S.-Brokered Cease-Fire Falters Soon After It Starts The U.S.-brokered truce — the third attempt by outside powers to end hostilities that erupted a month ago — went into effect early Monday. But the two sides quickly accused each other of violating it. 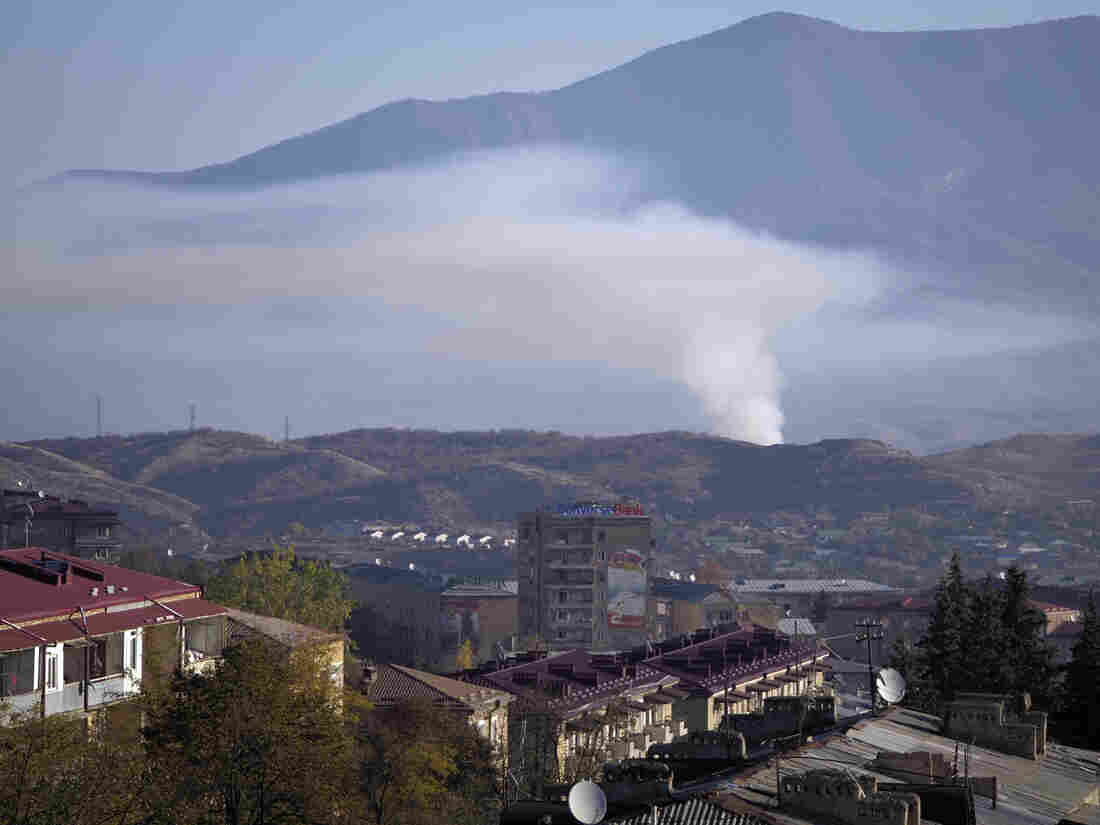 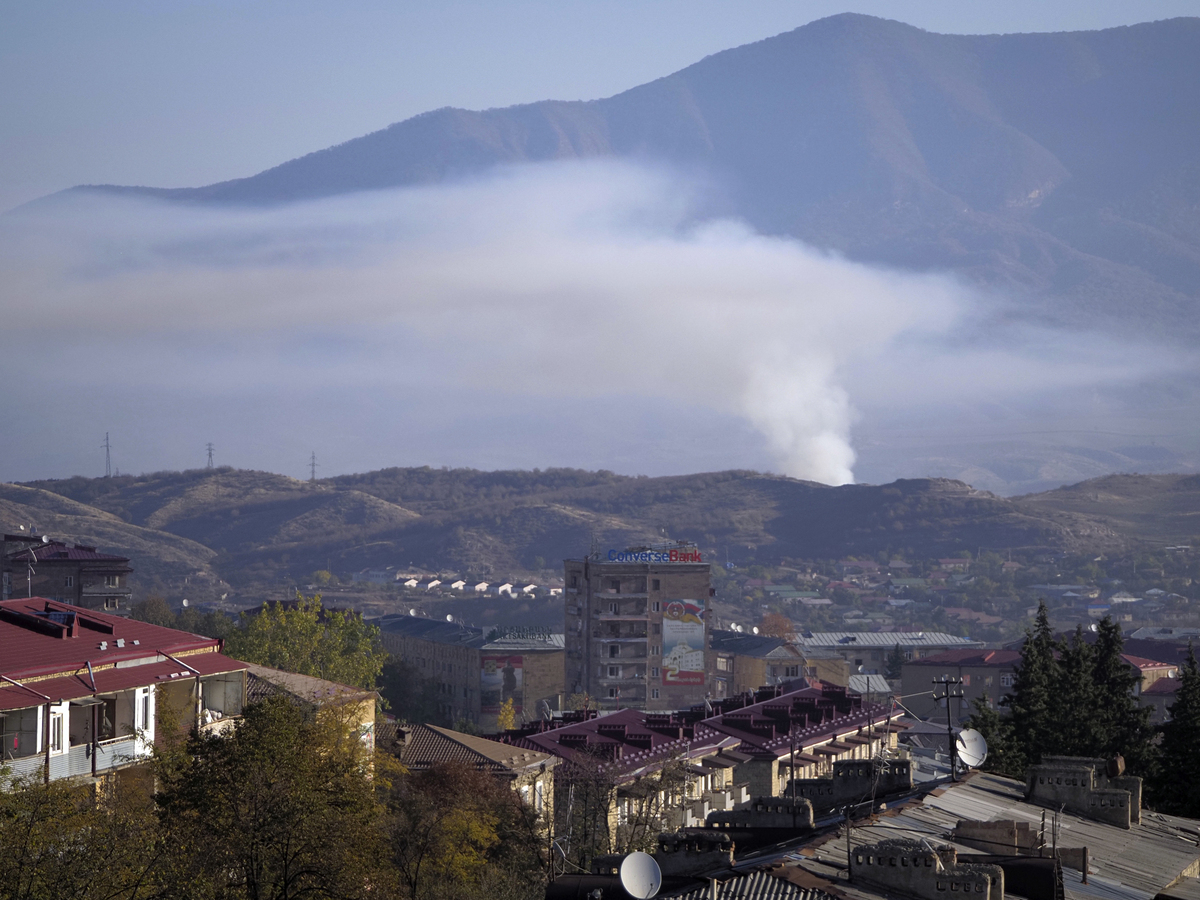 Smoke rises after shelling by Azerbaijan's artillery in Stepanakert, Nagorno-Karabakh, on Saturday.

On Sunday afternoon, President Trump tweeted his congratulations to the leaders of Armenia and Azerbaijan for agreeing to a cease-fire in the disputed Nagorno-Karabakh region. "Many lives will be saved," Trump wrote.

The U.S.-brokered truce — the third attempt by outside powers to end hostilities that erupted a month ago — went into effect at 8 a.m. local time on Monday. But it wasn't long before the two sides were accusing each other of violating it.

The conflict dates back to the end of the Soviet Union three decades ago, when ethnic groups across the country were demanding independence. The Armenians living in Azerbaijan's Nagorno-Karabakh region prevailed in a bloody war of secession and have been living in legal limbo for the past quarter century: not recognized as an independent state but running their own affairs as if it were one.

Together with Russia and France, the United States co-chairs a diplomatic initiative called the Minsk Group that has been charged with finding a lasting peace, including for the Azerbaijani territory surrounding Nagorno-Karabakh that is held by Armenian forces.

The Kremlin, which maintains close relations with both Azerbaijan and Armenia, has led diplomatic efforts to end the current flareup. Russian President Vladimir Putin said last week that the new fighting has cost almost 5,000 lives, and that he speaks to Armenian Prime Minister Nikol Pashinyan and Azerbaijani President Ilham Aliyev "several times a day."

Secretary of State Mike Pompeo met with the foreign ministers of Armenia and Azerbaijan in Washington, D.C., last Friday, after Democrats criticized the Trump administration for not taking a more active role. Pompeo's deputy, Stephen Biegun, then held additional talks with the two foreign ministers and hammered out the third cease-fire agreement.

The Trump administration has been pushing for diplomatic successes as the presidential election campaign enters its final week. U.S. negotiators have been trying to extend the New START arms control treaty with Russia before it expires in February. And last Friday, the White House announced it had brokered an "historic agreement" opening economic ties between Sudan and Israel.

Trump's Democratic challenger, Joe Biden, has slammed the president for his slow response to the fighting in Nagorno-Karabakh and "delegating the diplomacy to Moscow."

"The Trump administration must tell Azerbaijan that it will not tolerate its efforts to impose a military solution to this conflict," Biden said in an Oct. 13 statement. "It must make clear to Armenia that regions surrounding Nagorno-Karabakh cannot be occupied indefinitely and that credible negotiations on a lasting resolution of the conflict must commence immediately once a cease-fire is concluded."

Biden also said the Trump administration must stop "coddling" Turkish President Recep Tayyip Erdogan, whose support for Azerbaijan has changed the balance of power in the region.

The Armenian diaspora has helped focus U.S. politicians' attention on the Nagorno-Karabakh conflict, which Armenians depict as a struggle for national survival against its hostile neighbors, Azerbaijan and Turkey.

On Sunday, Democratic Rep. Adam Schiff assailed "Azerbaijan and Turkey's continued deadly aggression" and said in a tweet that "the United States must keep up the pressure on Aliyev and Erdogan to end this war." Schiff represents California's 28th Congressional district, which has a large Armenian-American population.

On the campaign trail in Londonderry, N.H., Trump addressed Armenian-Americans, calling Armenians "incredible people" who are "fighting like hell." He said ending the fighting in Nagorno-Karabakh would be "an easy one."

In fact, a lasting peace has eluded diplomats from the Minsk Group since the 1990s — and the lack of any prospect for a diplomatic solution is now propelling Azerbaijani military operations.

"For almost 30 years, the Minsk Group co-chairs have tried to reconcile Azerbaijan with the process of freezing the conflict, but we have created a new reality," Aliyev said in a televised address Monday. "We are fed up with these negotiations. How long can you negotiate?"

He warned that half a dozen Turkish F-16 fighters left in Azerbaijan following joint military exercises would be used against any "outside aggression." In September, Armenia said a Turkish F-16 had shot down one of its warplanes, a claim that Turkey denied.

In an address to Armenians on Monday, Pashinyan blamed Azerbaijan for violating the cease-fire, but said he hasn't given up hope for diplomacy.