Accessibility links
Florida voting and rights for incarcerated individuals : Planet Money Angel Sanchez was 17 and in prison when he learned felons couldn't vote in Florida. When he got out, he tried to change that. It was working – until money got involved.| Subscribe to our weekly newsletter here. 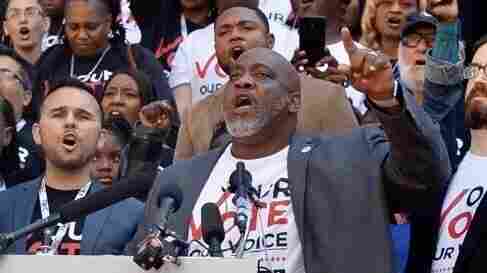 Angel Sanchez was 17 years old and in prison when he learned that Florida banned anyone with a felony conviction from voting – for life. At the time, that meant 1.4 million Floridians couldn't vote, ever.

He decided that when he got out of prison, he'd find a way to help change this. Which worked! Until the fight stopped being about voting rights... and started to become about money.

This fight to limit and restore voting rights has implications for not just Florida, but also for national politics. Florida is a state that can swing presidential elections, like the one happening next week. And elections in Florida come down to much less than 1.4 million people – Hillary Clinton lost the state by 112,000 votes, and George W. Bush won by just 537.

Because everything — even voter rights — is about money, keep tabs on things by subscribing to our Newsletter.