Accessibility links
Instead Of Losing Family And Friends Over Politics, Experts Say Communicate During a bruising political season, many Americans are dropping friends and family members who have different political views. Experts say we should be talking more, not less.

If you find yourself fighting with a friend over politics, or frustrated and furious with your nearest and dearest over whom they're supporting for president, you're hardly alone. A recent survey shows just how much the nation's bitter political divide is causing social splintering and taking a toll on friendships. Even decades-long relationships have been caving under the pressure, giving new meaning to "social distancing."

"I did straight up say, 'Dude, I'm done. Lose my number,' " said Shama Davis from Los Angeles, recalling when he "unfriended" a guy he'd been friends with since high school 25 years ago.

"I just hung up on my end and proceeded to just block him in every possible way," said Joni Jensen from New York, still fuming over the guy she felt compelled to dump.

And betraying just a tinge of regret about cutting off his cousins, Ricardo Deforest of Tampa, Fla., conceded, "I hate to say it because family is everything," before unabashedly proclaiming, "I disowned them. In my mind they're not family anymore."

I Can't Work With You! How Political Fights Leave Workplaces Divided

They are among the many Americans for whom political rifts have deepened. It's one thing to disagree about something such as tax policy, they said. But they see their differences now as ones of basic morality, core values and character, and that cannot be overlooked.

Davis, 42, a consultant who is Black, said he simply could not abide his friend downplaying police brutality, and harping instead on the looting and violence happening amid the mostly peaceful protests.

Jensen, a retired professor, also sees it as a moral absolute. As a sexual assault survivor, she said, she couldn't stand it when the guy she'd been close to for 40 years was being cavalier about the allegations against President Trump's then-Supreme Court nominee Brett Kavanaugh. (Kavanaugh vehemently denied the sexual assault allegations.)

"He was going off like, 'Oh, you drank the Kool-Aid,' and 'Kavanaugh didn't do anything,' " she recalled. "It made me sick. If this is his core ethics, I don't want that kind of person in my life."

A Nation Is Riveted As Christine Blasey Ford Testifies

Conservatives can be just as quick to spurn the liberals in their lives who clash with their core values, such as life and liberty — which is the biggie for Deforest.

"They sold our country out," Deforest, a 61-year-old steelworker, said of those on the left of the political spectrum. "This election is about the soul of what America is. You can't be a free country and be a socialist state at the same time."

He said the acrimony he's feeling from what he calls "hardcore Trump haters" was as much a factor in his decision to cut them off as their differences that gave rise to it.

"All they can do is say, 'Trump is a racist. Orange man bad! Orange man racist! They're blowing spittle, and [their] veins popping out of their heads," he said. "Yo soy Latino. But [they assume] I'm some sort of horrible racist because I like Trump. It's ridiculous!"

Jocelyn Kiley, associate director of research at the Pew Research Center, said political polarization is more intense now than at any point in modern history. Nearly 80% of Americans now have "just a few" or no friends at all across the aisle, according to Pew. And the animosity goes both ways. 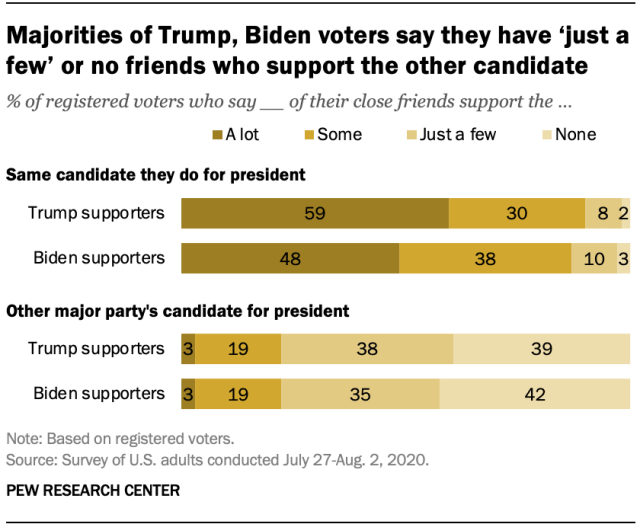 Tania Israel, a professor in the counseling, clinical and school psychology department at the University of California, Santa Barbara, said she's seeing more of those kinds of distorted views in the workshops she runs on cross-the-aisle conversations. The rancor is rising, she said, as both sides "tend to view the other as being more extreme than they actually are."

Another thing conservatives and liberals have in common, she said, is that they all suffer from big blind spots when it comes to the morality of their own side. They tend to view themselves as eminently fair and right, and the other side as irrational.

Case in point: Explaining his politics, Deforest noted, "When I say all these things, I think I sound fairly reasonable," while declaiming the other side with, "There's something wrong with these people."

Jensen, meanwhile, is just as certain, upbraiding the guy she was arguing with as "brainwashed."

A little more listening to understand, a little less trying to convince, and a lot more intellectual humility would do everyone a world of good, said Israel, who's also the author of Beyond Your Bubble: How to Connect Across the Political Divide, Skills and Strategies for Conversations That Work.

"We're flattening people out in terms of our view of them," she said, "and we're not really seeing the full complexity of people on the other side."

It's exactly what Jon Langford, 28, a Georgia truck driver, said he experienced when his brother, who is gay, wrongly assumed the worst about him.

"He went off on me saying essentially I'm a racist and a homophobe just because I'm a Trump supporter. No ifs, ands or buts. And he completely cut me out of his life," Langford said. They haven't spoken in years.

Now, Langford said, he's determined not to do the same thing to his friends across the aisle, including his best friend, who supports former Vice President Joe Biden. As Langford sees it, no one has a monopoly on morality.

"I could assume that anybody that supports Biden is a firm believer that it's OK to murder a baby," he said. "But I don't."

Another conservative, Judith Margolis Friedman, may be one of the few who can claim that she's managed not to lose any friends over politics. But she said that's because she kept her political views secret for fear of "social suicide."

"I would politely nod and go along to avoid conflict [...] with people whose relationships I valued," she said.

Instead, Friedman vented in a secret Facebook group that she said was a "safe space" where she could "commiserate with other people who also feel shut out from their regular life because of their views."

But this month, Friedman couldn't take it anymore and "came out of the closet," deciding that if people dumped her over her politics, "they weren't real friends after all."

She's hoping friends will give more weight to the person they've known for years, than whom she chooses to vote for.

"If someone expresses a more conservative worldview, they're immediately called a Nazi and a racist and a misogynist and a homophobe and everything under the sun," Friedman said. "I'm none of those things. I'm just a normal friggin' person who has a different point of view."

At the other end of the political spectrum, Jeff Marinstein, a business and technology consultant from Connecticut, has also been trying to get past the ever-intensifying invective and insults from "friends."

One, in particular, kept attacking him as a "libtard," among other things. Marinstein no longer talks to that guy. But with another, he's trying a new strategy to save the friendship, suggesting they keep talking, just not about politics. So far, it's proving harder to enforce than he thought.

"I'm still getting this nightly stream of New York Post articles and memes [mocking] Democrats, and I simply respond with a funny line that says, 'This post violates our agreement not to talk about politics,' trying to creatively send the message that I just don't want to engage," he said.

Whether the strategy ultimately works or not, Marinstein said, he wonders whether it may ultimately be doing as much harm as good.

"It just feels like the healthiest thing for me to do at the moment [is] to lower the temperature and to not continue these toxic conversations," he said. "But I suppose the risk is that I'm just retreating into my own information bubble with people who think just like me."

Indeed, experts said it's more conversation — not less — that's needed, if the nation is to heal its blistering divide. But it has to be healthy, productive conversation. And Israel, who runs the workshops on civil discourse, said the first step must be to take it off social media and talk in person instead.

"The only useful comment that you can make on somebody's social media post is 'Can we find a time to talk about this? I'm interested in hearing more,' " she said.