Accessibility links
Associated Press Election Results: Here's How The Winner Is Declared : The NPR Politics Podcast NPR, like many news outlets, relies on The Associated Press to discern and report election results. In this episode, we speak with the AP's David Scott about how the organization makes those determinations. 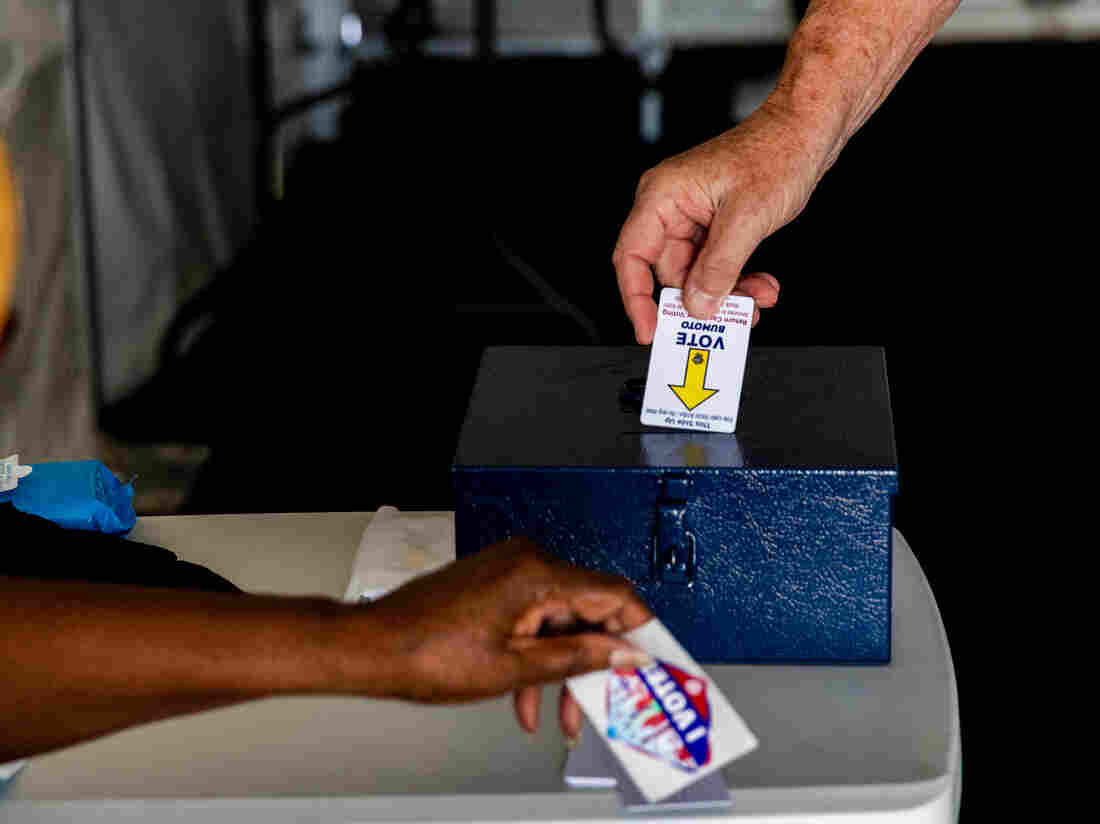 A voter returns a voting card at an early-voting polling location in Las Vegas on Oct. 17. The presidential race is one of 7,000 contests for which The Associated Press will be tallying votes and calling a winner. Bloomberg/Bloomberg via Getty Images hide caption 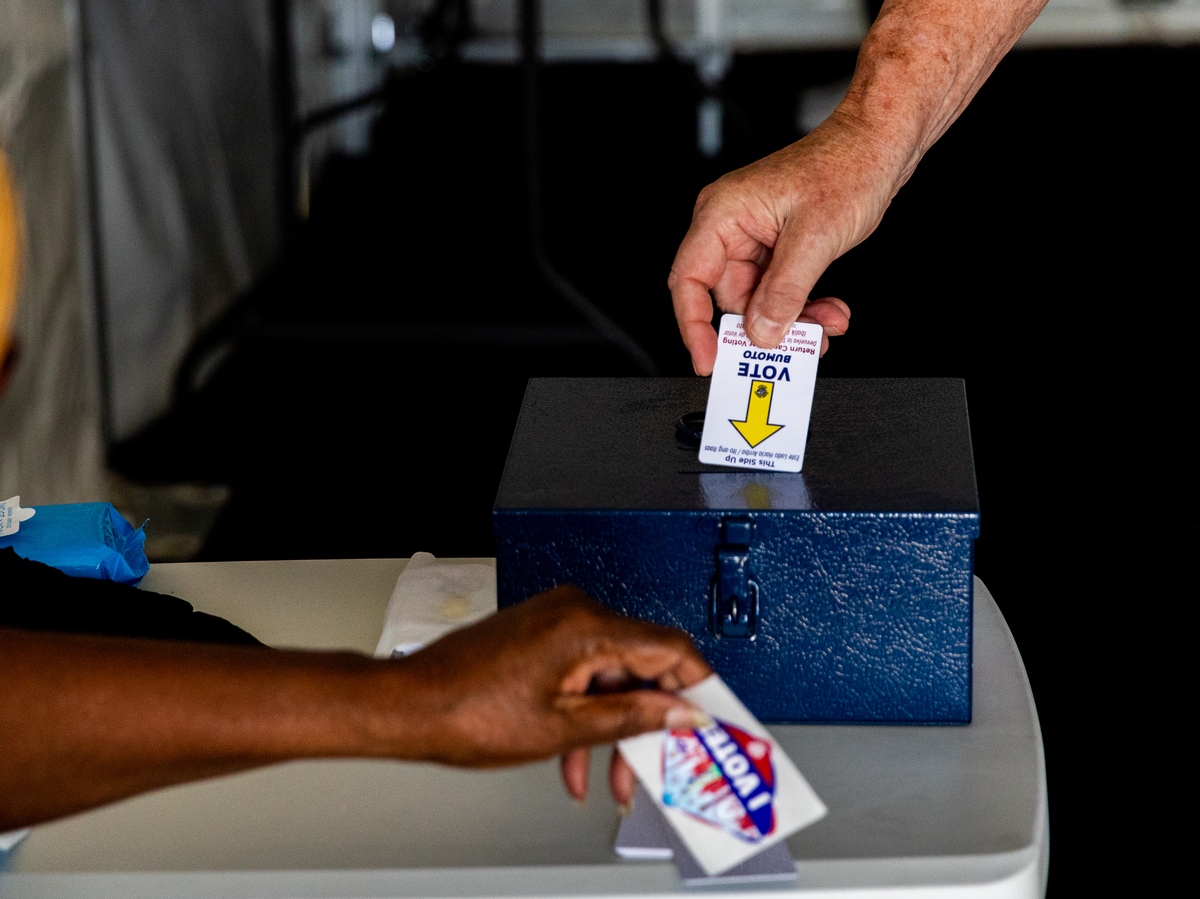 A voter returns a voting card at an early-voting polling location in Las Vegas on Oct. 17. The presidential race is one of 7,000 contests for which The Associated Press will be tallying votes and calling a winner.

As the 2020 election draws to a close, many Americans are worried that the night of Nov. 3 will bring few definitive answers. More than 80 million people have already cast a ballot — either by mail or in person — and this unprecedented surge in early voting has raised fears that it could be days or even weeks until winners are known.

The journalists on The Associated Press decision desk know those concerns well. The AP has been verifying returns and calling races stretching back to the election of 1848. This year, the race between President Trump and Joe Biden is just one of 7,000 for which it will be calling a winner.

"There's really no provision in the Constitution that says who should actually do all that counting, who should say who the winners are," says David Scott, a deputy managing editor overseeing election coverage at the AP. "But we've got a long history of playing this role in the democracy."

NPR, like many news outlets, relies on The Associated Press to discern and report election results. To learn more about how the organization makes those determinations, we spoke with Scott about how it is getting ready for Election Day.

How does the AP decide when to call a race?

The decision to call a race revolves around one simple question: Does the trailing candidate have a viable path to victory? In some cases, the answer is a simple no. A state in which voter registration and early voting have been dominated by the same party for generations, for example, is likely to be called early in the night.

It's the more competitive races where things become tricky. Those are the races that take longer to call, Scott says, as the decision desk sorts through a broad array of data points.

How unprecedented are this year's voting trends?

The way that voters are casting their ballots this year isn't entirely new. Before the coronavirus pandemic, states such as Colorado, Hawaii, Oregon, Utah and Washington were already primarily vote-by-mail states. What's unique about 2020, says Scott, is the sheer scale of this year's shift to early voting and vote by mail.

"This is going to be the first election in American history where more than half of voters are going to cast their ballot before polls open on Election Day," says Scott. "And that's such an amazing idea that that transition is taking place and it's taking place incredibly rapidly. ... We were always going to get there. But I didn't expect it at the start of this year that it would be this year. It might have been two election or three election cycles away."

How is The Associated Press preparing for the surge in early voting?

One of the decision desk's big areas of focus ahead of Election Day, says Scott, is looking back at this year's primaries, as well as past election cycles, to gauge how long it takes a state to count its early votes in the context of counting its entire vote.

The AP will also have mountains of data on voter preferences from AP VoteCast, a massive set of preelection polls it is conducting as an alternative to traditional exit polls for the AP, NPR and other news outlets. Scott says the AP will talk to roughly 140,000 people in the days leading up to Election Day and all the way through to the moment that polls close.

"And so what we're able to do is use that very large sample to paint a really accurate, a really deep picture of the electorate," he says.

Will the presidential election be called by midnight on election night?

The AP has not always called a winner the same day that polls close. So in short, it depends.

"Since 1992, we've been able to call it on Election Day, and by that I mean midnight on the East Coast, four times. And three times, it took us more than Election Day. In 2004, it was the next day. In 2016, it was about 2:30 in the morning on Wednesday, East Coast time. And then in 2000, obviously, we never called the race between George W. Bush and Al Gore."

The organization does not make projections or announce likely winners, says Scott. Rather, it will call a race only once a candidate's path to victory is indisputably clear. So if the race between Biden and Trump is close on Tuesday — as it's expected to be — Americans should brace for a potentially long wait.

Should Americans worry if there are no definitive results on election night?

A long wait on election night doesn't mean voters should panic. The fact remains that official results have never been fully tabulated and certified by the night of the election. Scott advises practicing patience, especially when it comes to the work of election officials themselves.

"The first thing I like to say is, let's give them the time to count the vote and be patient with them as they are counting the vote. They're working late at night under tough conditions to make sure that we're all able to cast our ballots. Some of them are volunteers, poll workers. And so giving them the space and us having patience for them to do their work, I think is something that's important to remember."

The numbers will come when they come, he says, and when they do, "we're going to analyze them and we're going to look at what the people have said and their votes, and then we'll tell you who won."