Accessibility links
Biden And Trump Campaigns Stress Closing Themes In New TV Ads Joe Biden's campaign is casting the election as a decisive moment in the country's future, while President Trump's campaign is attacking Biden on issues including crime and energy. 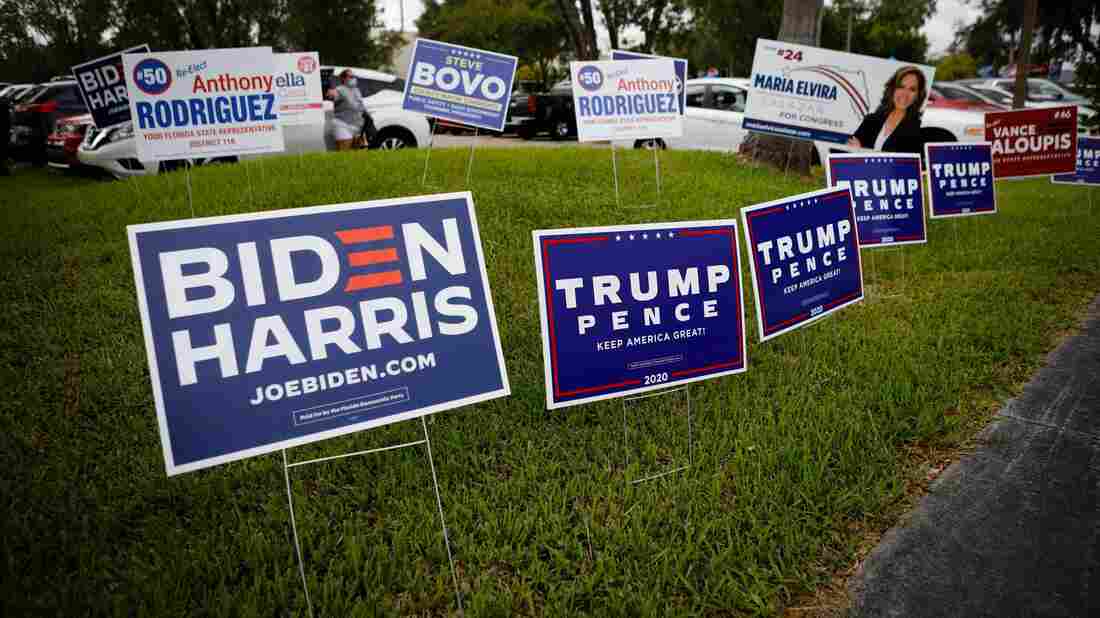 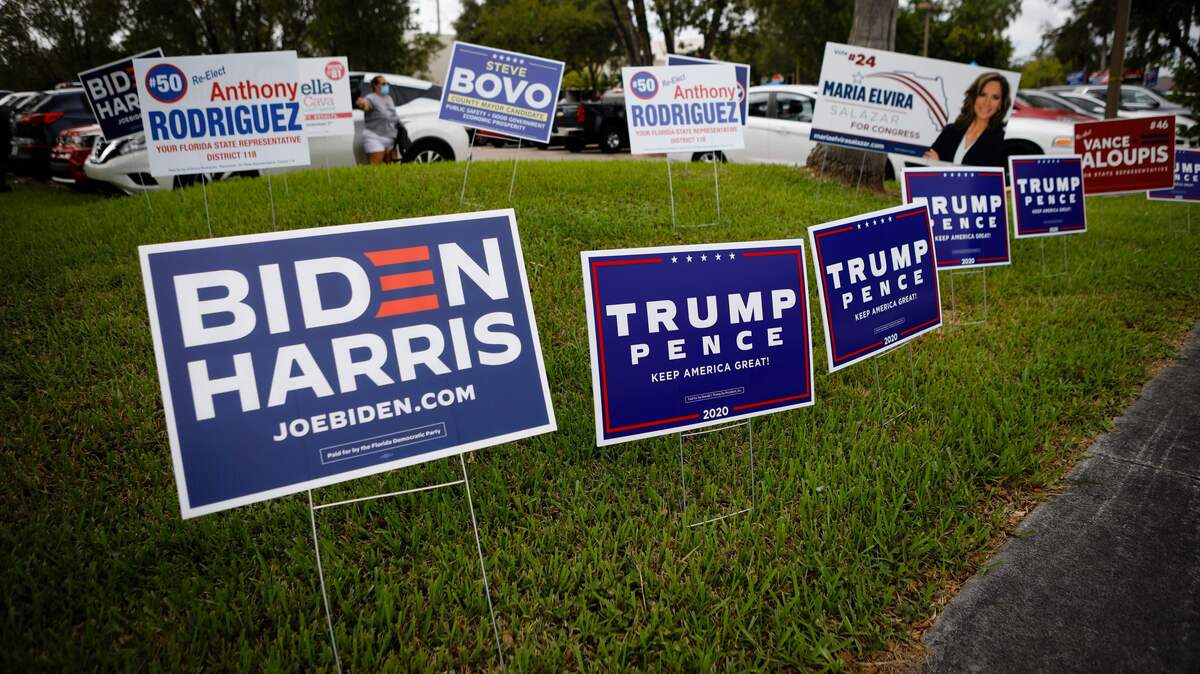 Campaign signs are in abundance last week for early voting at Westchester Regional Library in Miami.

With a week until voting concludes this election season, the presidential candidates are making their final pitch to voters on the campaign trail — and on the airwaves.

Joe Biden's campaign rolled out two, closing argument-style spots on Tuesday, amplifying themes the former vice president has promoted since he first launched his candidacy — casting the election as a decisive moment for the country's future and emphasizing the candidate's personal story and character.

Meanwhile, new ads from President Trump attack Biden over trade and the economy, and emphasize the "law and order" message the president began deploying early this summer as protests over police brutality and racial injustice grew around the country.

"I started this campaign saying we're in a battle for the soul of the nation," Biden says in an ad called Rising as images of him meeting voters on the pre-pandemic campaign trail flash on the screen. "I believe that even more deeply today."

The ad depicts images of parents with their children, then photos of polling places and voting booths, before landing on Biden addressing the camera directly and launching into language that's lately made up the closing of his stump speech.

"Character is on the ballot, the character of the country, and this is our opportunity to leave the dark, angry politics of the last four years behind us — to choose hope over fear, unity over division, science over fiction," Biden says. "I believe it's time to unite the country, to come together as a nation."

The second Biden ad, In the Dark, features Jill Biden addressing the camera, interspersed with archival and family photos of her husband and their family as she narrates the story of Joe Biden — the man who's faced tragedy and, she says, guided by faith has been able to put his family's life back together again.

"Right now, a lot of families are hurting, and I know in my heart that if we entrust this nation to Joe, he will do for these families what he did for ours: Bring us together, help us find light in the darkness, keep hope for the future alive in all of us," she says.

The minute-long ads will air on cable and broadcast TV stations, including in 16 states — providing a window into the number of states the well-funded Biden campaign views as competitive.

The campaign also announced it's launching five Spanish-language ads in 11 states. One that targets young Latinos specifically, Cancelado, talks about how the pandemic has canceled prom, graduation and jobs — and quotes the president saying, "It is what it is."

Polls have pointed to sagging Latino support for Biden compared with 2016 nominee Hillary Clinton in some places, including in Texas, where Democrats see a shot to turn the state blue for the first time in decades.

While Biden has made the president's handling of the pandemic a central feature of his campaign message, the new Trump campaign ads steer clear of the issue, keeping with the president's rhetoric that downplays the coronavirus.

On Tuesday, the Trump campaign unveiled a national ad called President Trump Will Uphold the Law. The spot, which features an ominous voiceover as well as two veteran police officers, begins with headshots of Biden and Harris backed by outbursts of fire and sparks and then images of cars and cities burning.

One unnamed man, labeled onscreen as a police officer, tells viewers that "Joe Biden's silence speaks loudly. He doesn't have our backs."

Says another: "In Joe Biden's America, we'll all be in danger. If you support the police, support Donald Trump."

In its statement about the ad, the Trump campaign didn't say where it will air.

Another ad released this week highlights a fracking technician in Pennsylvania.

"If Joe Biden's elected, he'll end fracking," she says. "That will be the end of my job and thousands of others."

Biden's climate plan calls for stopping new oil and gas permitting on public lands, but he has made a point recently of telling voters he will not ban fracking writ large. During a March primary debate, he appeared to go further in supporting a ban on all fracking but later said he misspoke.

According to an NPR analysis based on data earlier this month, more than $1 billion had been spent on television advertising in 13 states.

At the time, Biden and allied groups had outspent Trump and pro-Trump groups on ads in six key states by a total of $240 million.