Accessibility links
New Justice Barrett Faces Motion To Recuse In Election Case A Pennsylvania county asked the new justice to disqualify herself because her nomination and confirmation is "unprecedented" and linked, by Trump, to his own reelection. It later reversed itself. 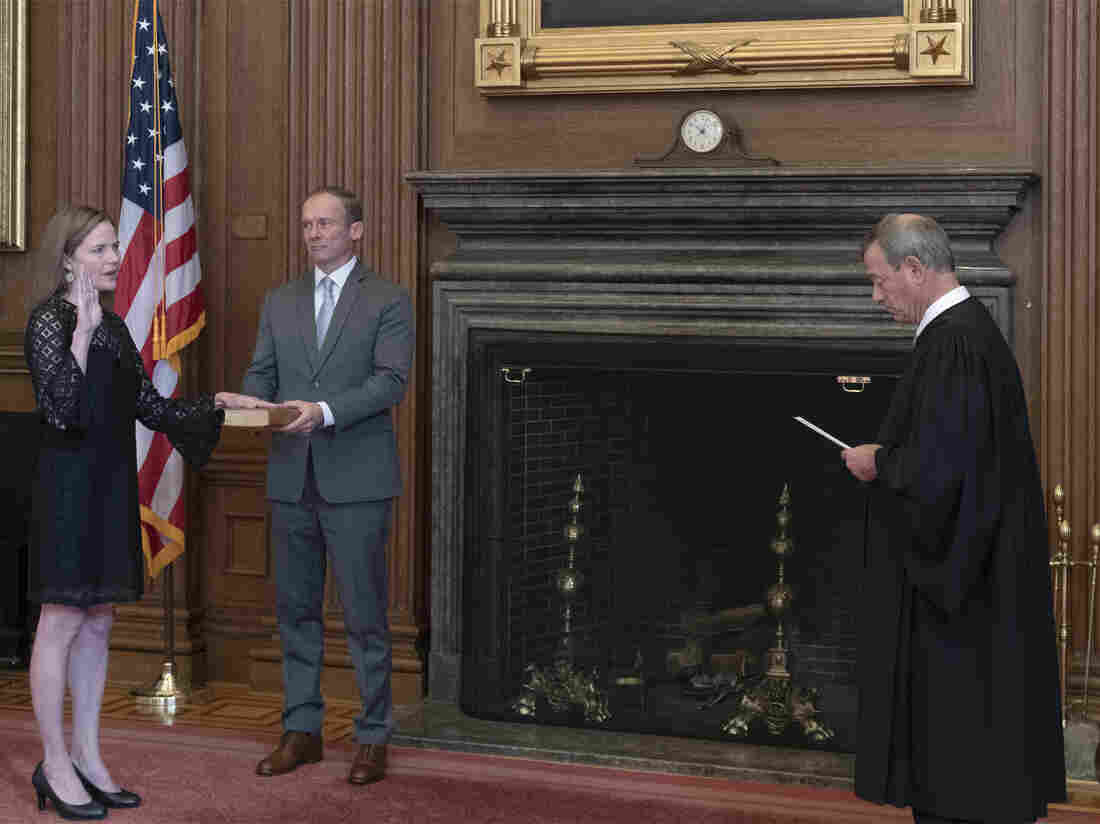 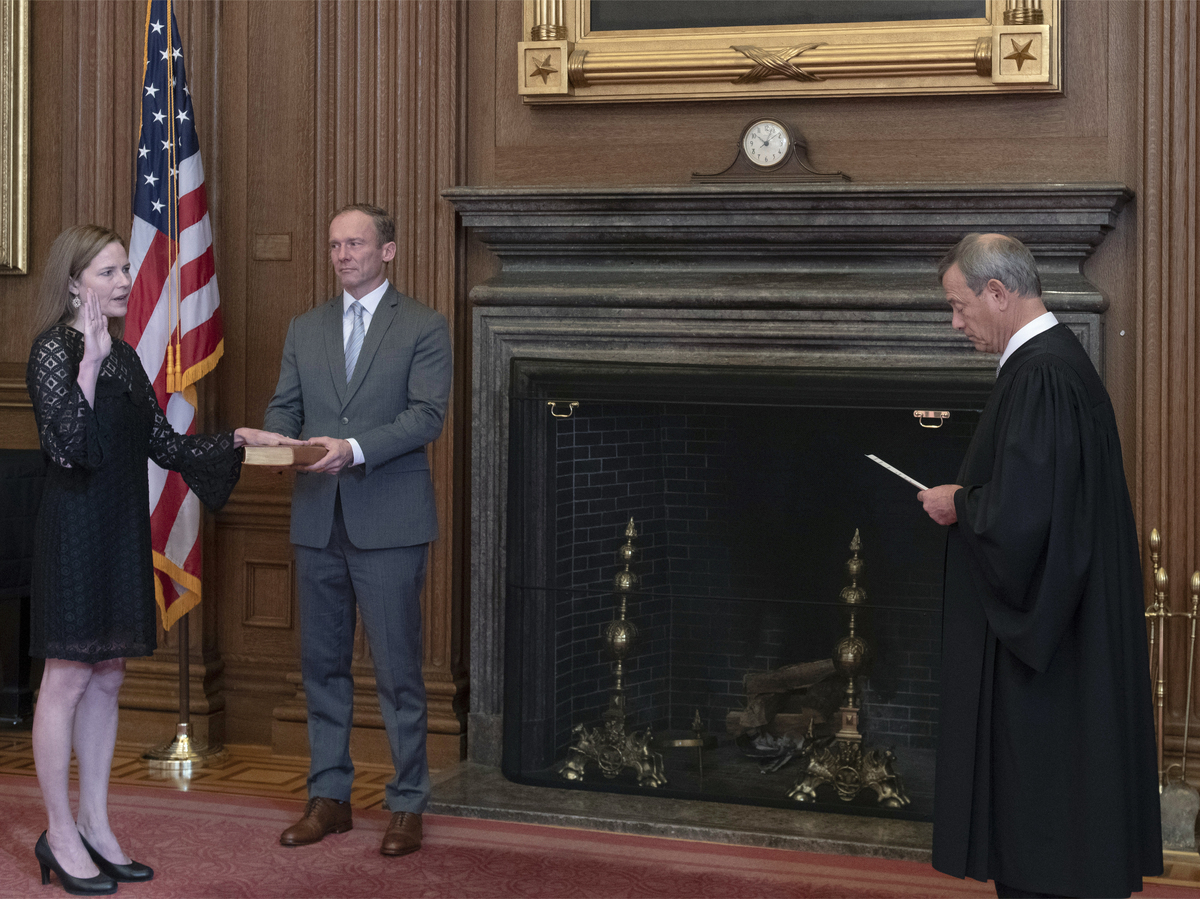 Fred Schilling/Collection of the Supreme Court of the United States

Amy Coney Barrett became the 115th Supreme Court justice Tuesday when Chief Justice John Roberts administered the judicial oath of office in a private ceremony at the court. Barrett immediately was faced with an unusual motion seeking her recusal in an election procedures case currently pending before the court from Pennsylvania.

The motion to recuse was filed by the Luzerne County Board of Elections in an 11th-hour case brought by the Republican Party and Republican state legislators. Citing federal ethics laws that require a judge to recuse herself if her impartiality might reasonably be questioned, the elections board contends that the nomination and confirmation of a Supreme Court justice right before a presidential election is not only "unprecedented," but "even more troubling" is President Trump's own statements linking Barrett's nomination "directly to ... his own current re-election," should the results of the election be challenged in court.

In an indication of what a red-hot controversy this is, the county board rescinded the motion after an emotional debate Tuesday by the county council. But it is likely that similar motions will be filed in future cases.

The motion to recuse came on a hectic day for Barrett when the last chip fell into place for her ascension to the high court — Roberts administering the judicial oath.

All of the other members of the court attended the private ceremony, except for Justice Stephen Breyer, who listened in by phone from his home in Massachusetts. Also present were retired Justice Anthony Kennedy and Barrett's husband, Jesse, but not their children. All wore masks, according to the court's press office, and Barrett used the family Bible for the occasion.

The recusal question added yet another question before Barrett, who is now ensconced in her new chambers, the very chambers previously occupied by the late Justice Ruth Bader Ginsburg.

It arises in an effort by Pennsylvania state Republicans to get a second bite at the apple in an election case decided by the court last week by a tie vote. The issue last week: whether to allow absentee ballots to be counted up to three days after the election, as long as the ballots were postmarked by election day. Chief Justice Roberts sided with the court's three liberals in the case based on his view that in a situation like this, close to the election, state courts should be able to interpret state law. The court's other conservatives wanted to block the state court ruling, but a tie vote means the state court ruling remains in place.

Once Barrett's nomination was reported to the Senate floor last Friday, however, the Pennsylvania Republican Party went back to the Supreme Court seeking for a second time to block the state court ruling, but using a new legal maneuver. And it is that case that Barrett, now officially a sitting justice, could participate in unless she recuses herself.

Ultimately, when dealing with recusals at the U.S. Supreme Court, each justice decides for himself or herself whether to recuse from a case. Most recusals involve a justice's financial interest in a case — for instance, if a case involves a company or a subsidiary in which the justice owns stock, or a case involving a relative, or if a justice or a relative of the justice has been involved in the actual case before the court. And on rare occasion, a justice may recuse if he or she has made extrajudicial comments about one of the parties involved in the case.

But as Case Western Reserve law professor Jonathan Adler observes, "as odd as it may seem, federal judges are under no obligation to recuse in cases involving a prior benefactor, and there is no precedent for judges or justices recusing because the case implicates the interests of the president who nominated them."

Technically, Supreme Court justices are not bound by the code of conduct in federal law, but they do try to abide by those rules. And as Adler, a conservative scholar, wrote this week, based on these criteria, Barrett may not be required to recuse. And yet, as he observed, there is another ground for recusal, namely, when a justice's "impartiality might reasonably be questioned." That, he suggests, may be why it would be "prudent" for Barrett to recuse. As he put it in a piece written for the Volokh Conspiracy blog:

"Trump's own norm-breaking behavior may justify a departure from the traditional norms of recusal. His repeated comments about the role of courts in the election—and the Supreme Court and his nominee in particular—are [so] high-profile that they might create the sort of appearance problem that the recusal rules are designed to address. Simple prudence may counsel recusal in a special case like this. After all, we've never had a justice confirmed in the midst of an election before."