Accessibility links
'Marking Time' And Making Art: MoMa PS1 Explores Creation And Incarceration An exhibition at MoMa PS1 features work created by currently or formerly incarcerated artists and their family members. Curator Nicole R. Fleetwood knows what it's like to love someone on the inside. 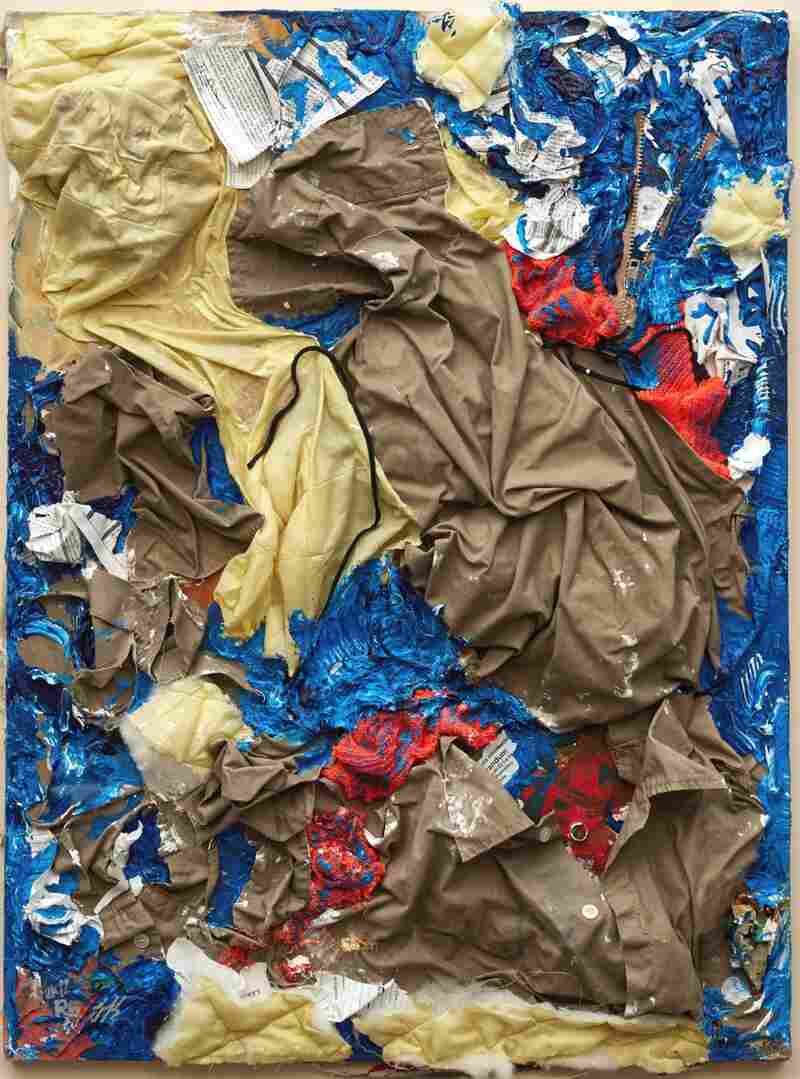 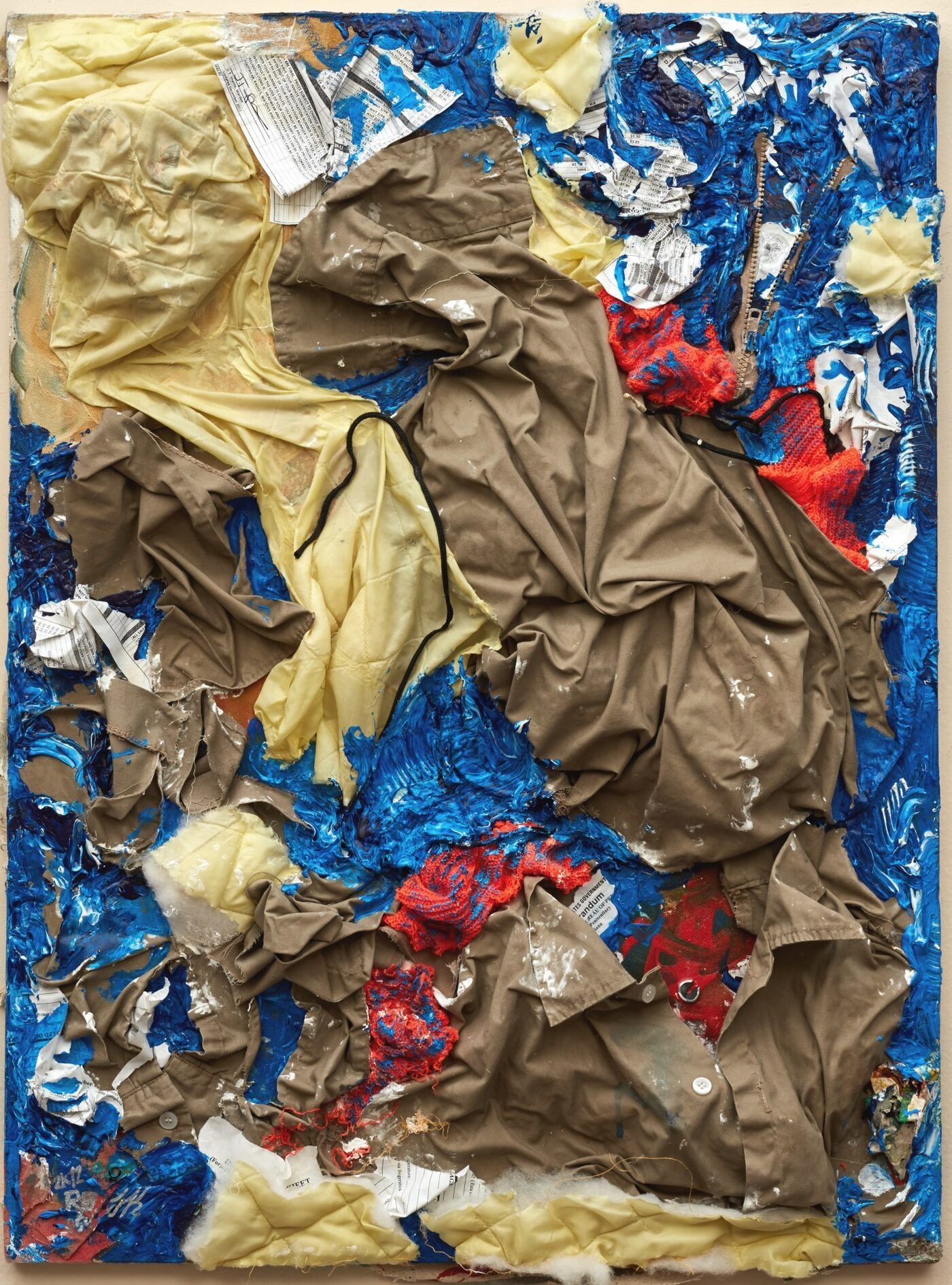 Fleetwood is curator of "Marking Time: Art in the Age of Mass Incarceration," a new exhibition at New York City's MoMa PS1.

The exhibition collects work made by artists who are either currently in prison, were formerly in prison, or had family members in prison. Considering the U.S. currently locks up more than 2 million people, that's a substantial pool.

Fleetwood grew up in a small town in southwest Ohio, and saw up-close how our system of punishment "stigmatizes, isolates, and humiliates certain people." She witnessed friends, neighbors and family members swept up by the system of mass incarceration.

She'd do her best to stay in touch — writing letters to her incarcerated cousins, visiting when she could, trading pictures and greeting cards back and forth. But she kept this memorabilia tucked away in drawers or cabinets, until she realized she was also taking part in the shame and stigma of prison. So she started hanging them around her home, as a way of actively bringing her cousins into her day-to-day life, "refusing to have them invisible behind prison walls," she said.

The practice led her to start researching art in prison, resulting in this exhibition, which includes paintings, photography, sculptures and more. 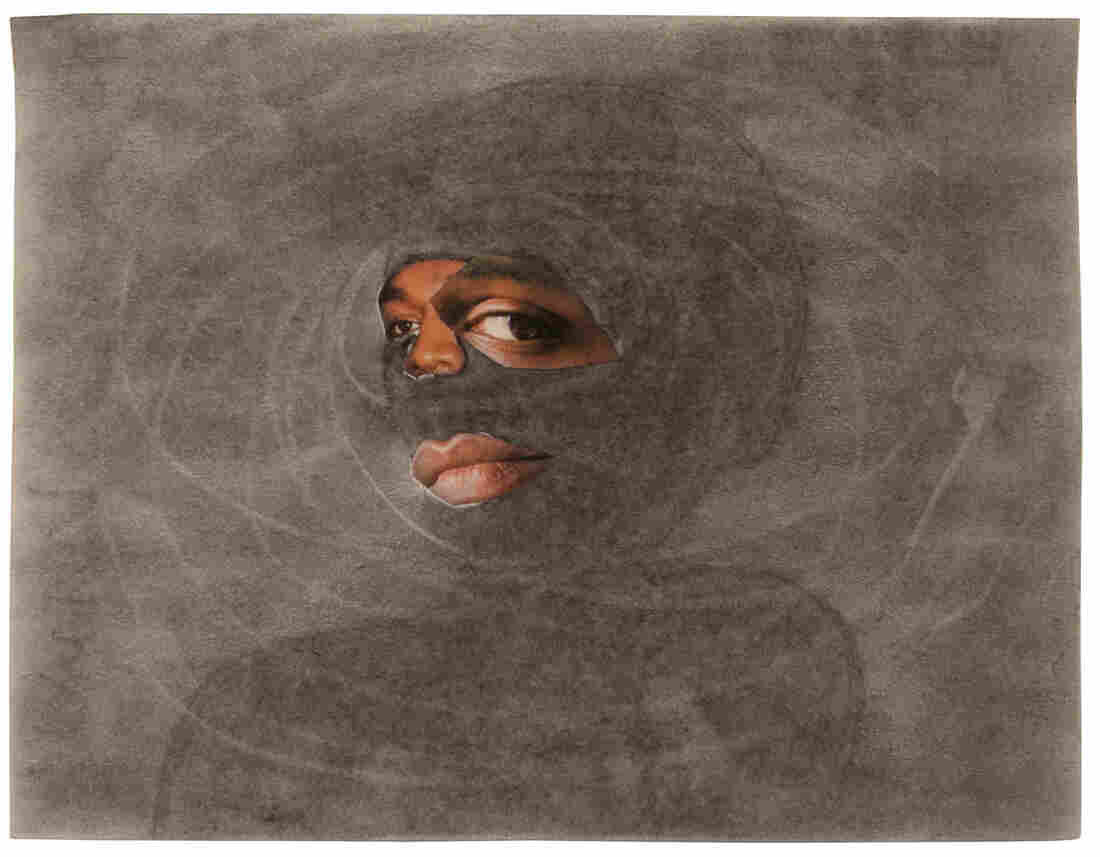 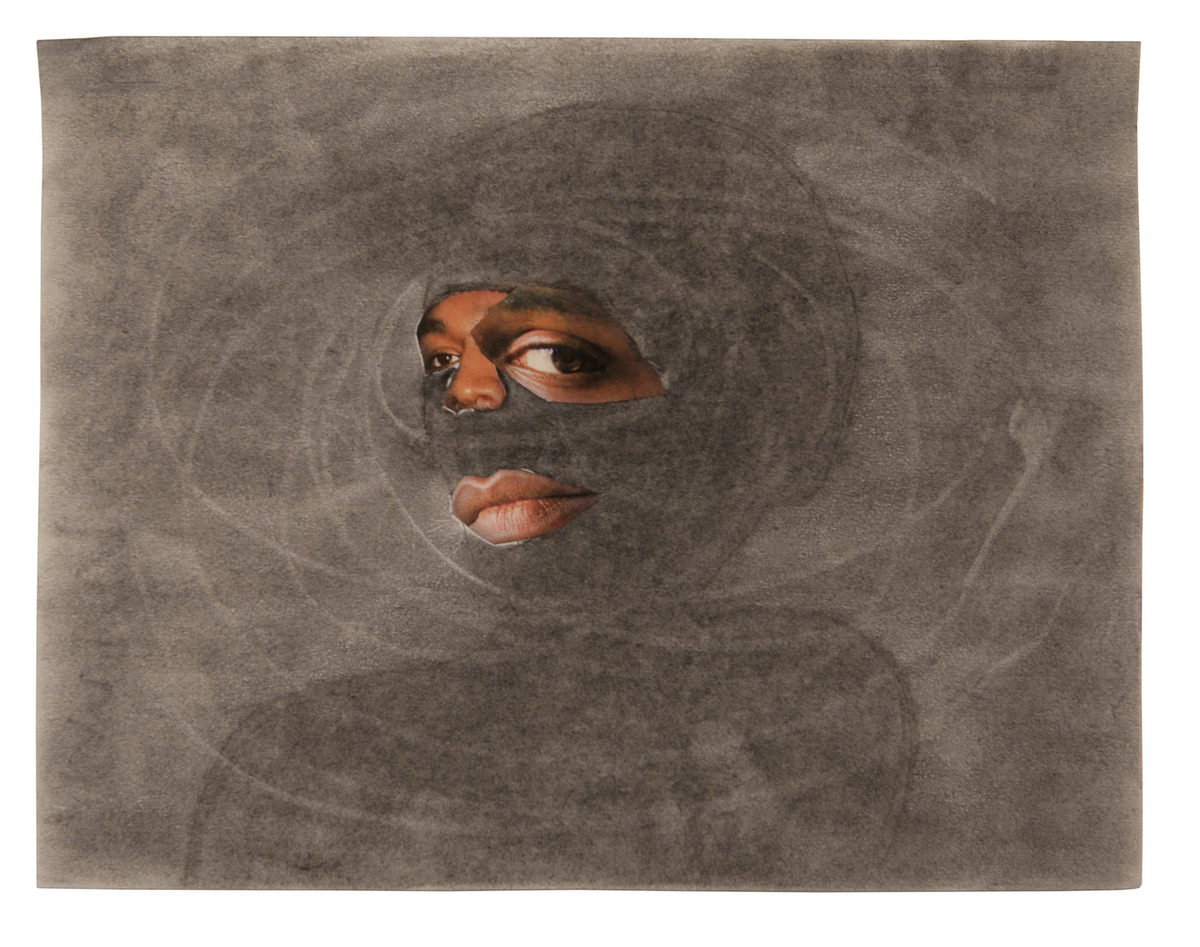 Tameca Cole's Locked in a Dark Calm opens the exhibition. It's a collage on graphite, small enough that you might miss it if you're not paying attention. Cole was in prison when she made it, close to the end of her sentence. Then a correctional officer said something that set her off. She didn't specify what was said, but it was something that made her feel degraded and angry — angry enough to talk back, or as she put it, "mess up everything I had worked hard for."

Instead, she funneled her feelings into this piece of art. "It just came out," she said. "I just saw myself outside myself."

For Fleetwood, the piece speaks to "wanting to be recognized as a person of value and not just someone being punished by the state as a bad person."

Throughout the exhibit, Fleetwood mostly avoids bringing up the reasons for an artist's incarceration. She said it was a way to get out of the rigid frameworks we often use to talk about prison — innocent versus guilty, good people versus bad people, those deserving and undeserving of freedom. Instead she wanted the exhibition to be a more holistic reflection of American society and its relationship to incarceration.

Locked in a Dark Calm has brought Cole more attention that she'd ever thought she would get. Out of prison now, she gets calls from gallerists and reporters like me. It's all a bit overwhelming, actually — juggling her burgeoning art career while holding down a job, and adjusting to life outside of prison. Still, she makes time for her art, and appreciates how much it resonates with people.

"I like my art to speak to people, to inspire people," she says. "But I definitely don't want to be famous." 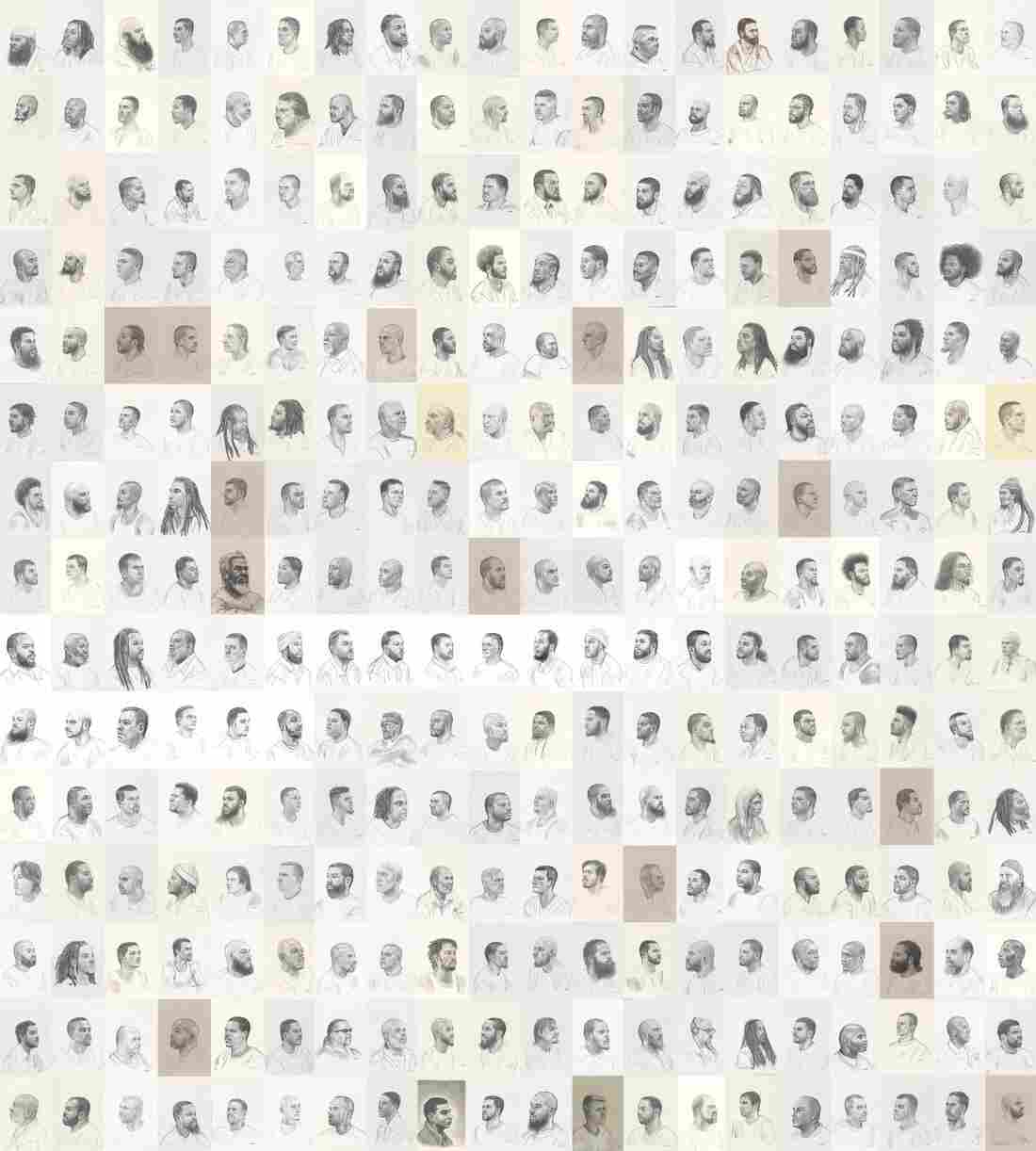 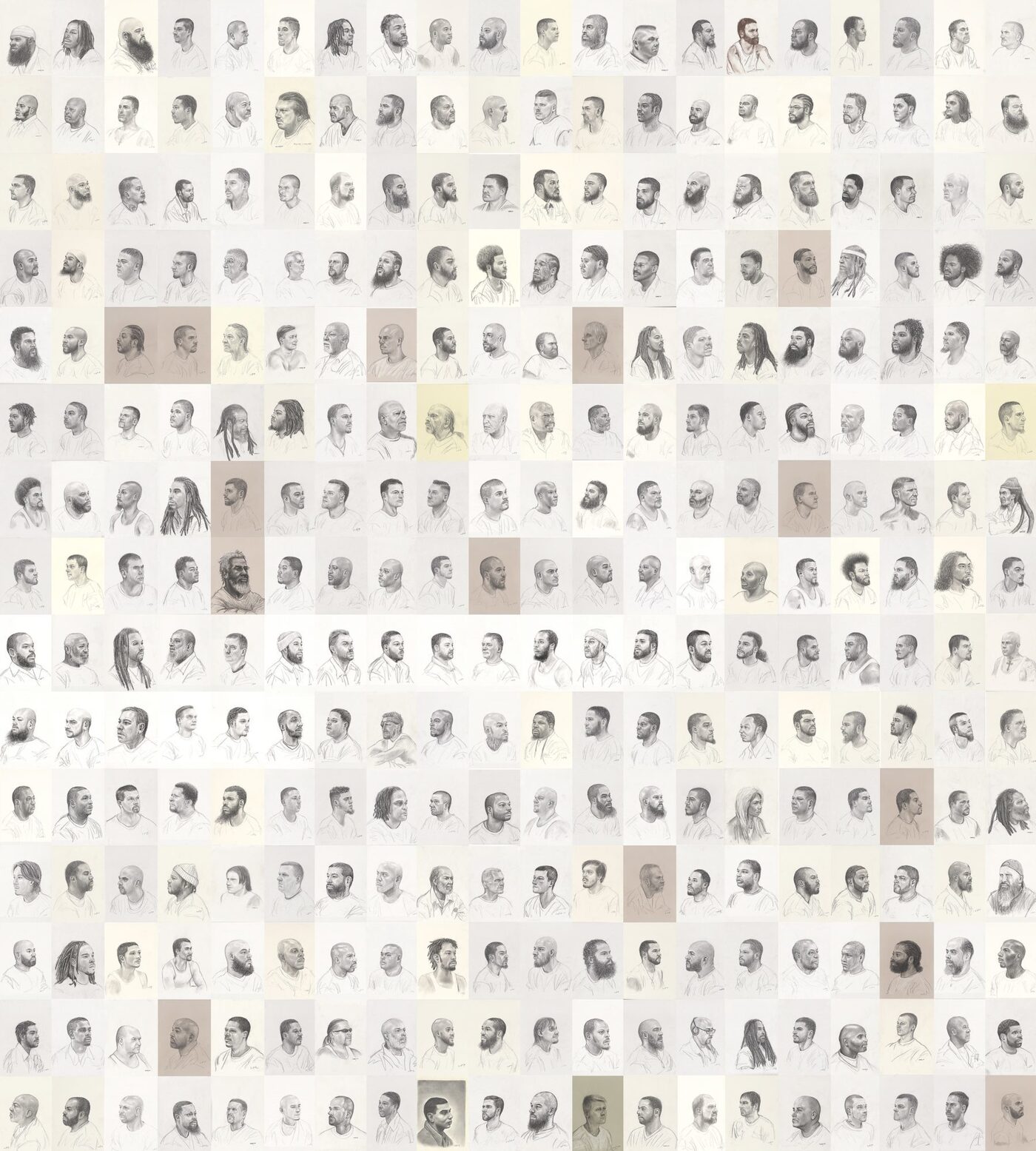 If time is the measurement of punishment in prison, you can see it most clearly enumerated in Mark Loughney's Pyrrhic Defeat. Loughney is a portrait artist currently incarcerated in Pennsylvania. The piece collects more than 600 pencil-drawn portraits he's done throughout his years in prison. At MoMa PS1, they occupy all four walls of one room. Turning around in the room, you can see Loughney get better, more adventurous with his detailing.

Loughney says the hardest part of doing these portraits is simply finding the time and space to do it. Prison is loud and chaotic, and it's hard for him and his sitters to stay focused. So he tries to get them done as quickly as possible, and he's had a small advantage on that front recently: "The masks actually make it a lot easier because I don't have to focus so much detail on a nose or mouth," he says.

'The Writing On The Wall' Finds Poetry Behind Bars, Projects It Onto Buildings

His subjects are in a ¾ view, looking just askew. At first he did this because it was uncomfortable looking in another man's eyes for an extended period of time. "Everybody is trying to puff up their chests in here," he says. "And it's hard to really let your guard down." But it has an added effect of making his subjects look like they're in a Renaissance-era painting. Loughney says it gives his subjects a sense of dignity and hope.

"Portraiture is a type of prison currency," writes Fleetwood in the book that accompanies the exhibition. Many of the portrait artists she's spoken to told her that the skill was key to their survival in prison. Artists are commissioned to draw portraits of lovers or children or music/sports stars in exchange for commissary items and other necessities. For Loughney, part of the pitch he makes to get his subjects to pose for him is that they can keep the originals, and send copies home to their families. 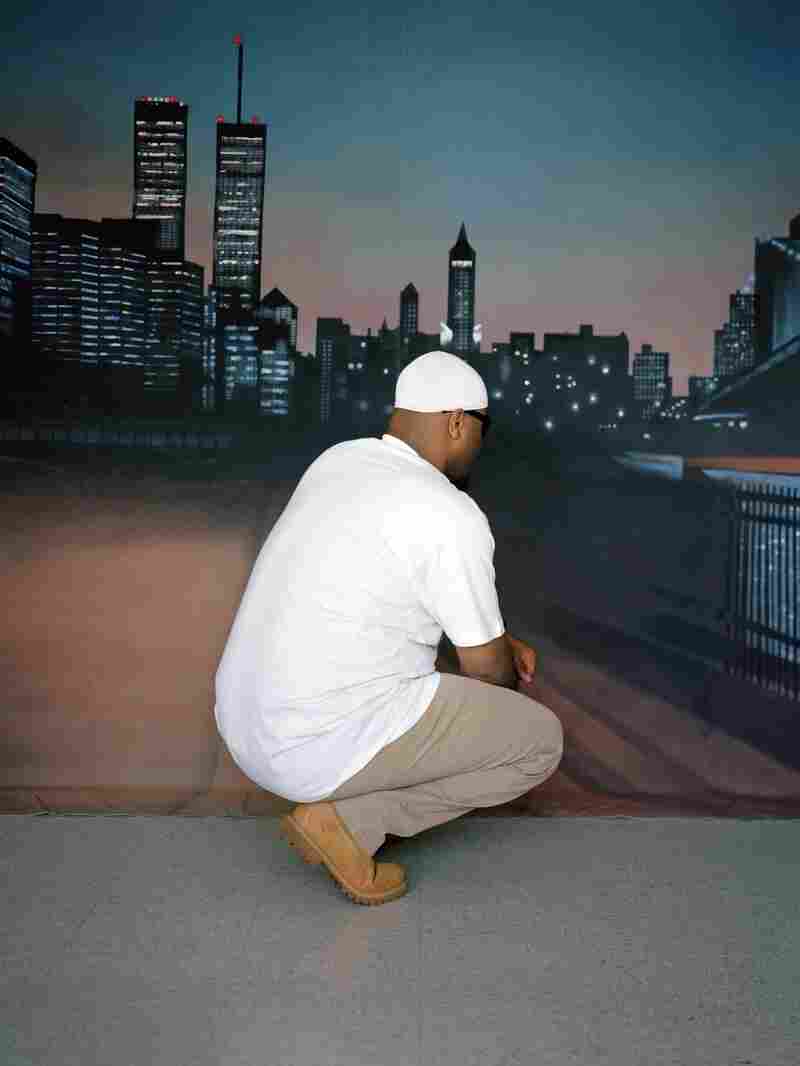 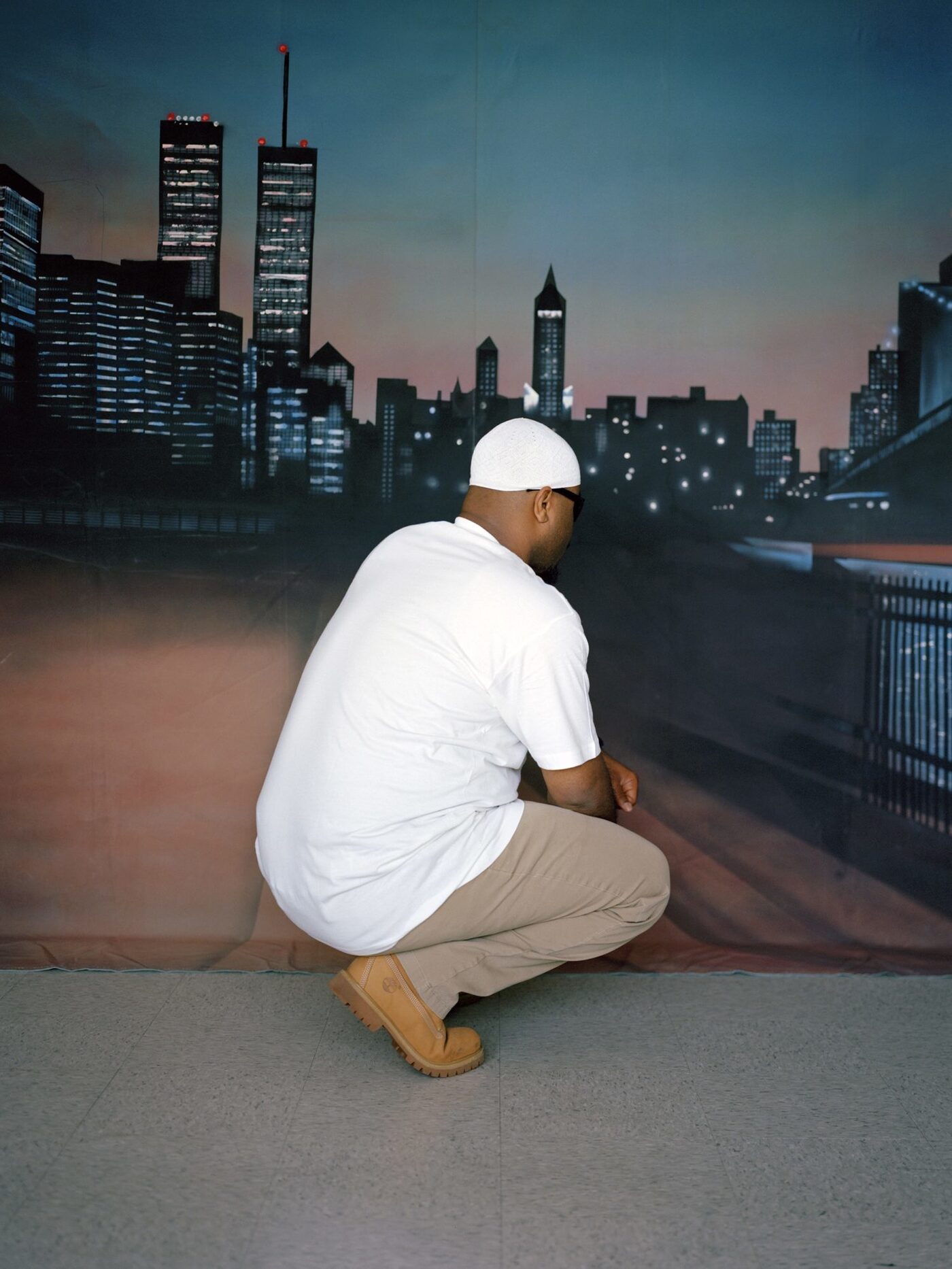 Pictures being sent home are a core facet of prison art. In the accompanying book, Fleetwood includes pictures she took with her cousins in visiting room photo sessions — smiling and posing against painted backdrops. Fleetwood estimates that there are millions of these types of photos circulating between incarcerated people and their families and friends.

Larry Cook's piece The Visiting Room is a play on this type of photography. Inspired by his uncles who were incarcerated, Cook stages his subjects inside recreation prison visiting rooms. But instead of facing the camera, they're turned, looking towards painted backdrops of cityscapes, skies, and fancy cars. Counterbalancing Loughney's hurried sketches, Cook's photographs are more contemplative. "Having that faceless element allows us to resonate personally in any way that we can in terms of entering into the photograph," says Cook.

Cook's background is in club photography which, similarly, uses painted backdrops to evoke an air of fantasy and escapism. But in the context of prison, it offers a decision to break from the aesthetic coldness of a visiting room. Everything in Cook's photographs — from the shoes to the poses to the backgrounds — are small acts of agency.

So much of prison art is about connecting people who are kept far away, both physically and emotionally. In our interview, Fleetwood brought up the writer Etheridge Knight who was known for the poems he wrote in prison. In his poem "The Idea of Ancestry," he sits in his cell, looking at 47 pictures of family taped on to his wall and writes, "I am all of them, they are all of me."

"Marking Time: Art in the Age of Mass Incarceration" is on view at New York City's MoMa PS1 until April 4, 2021. 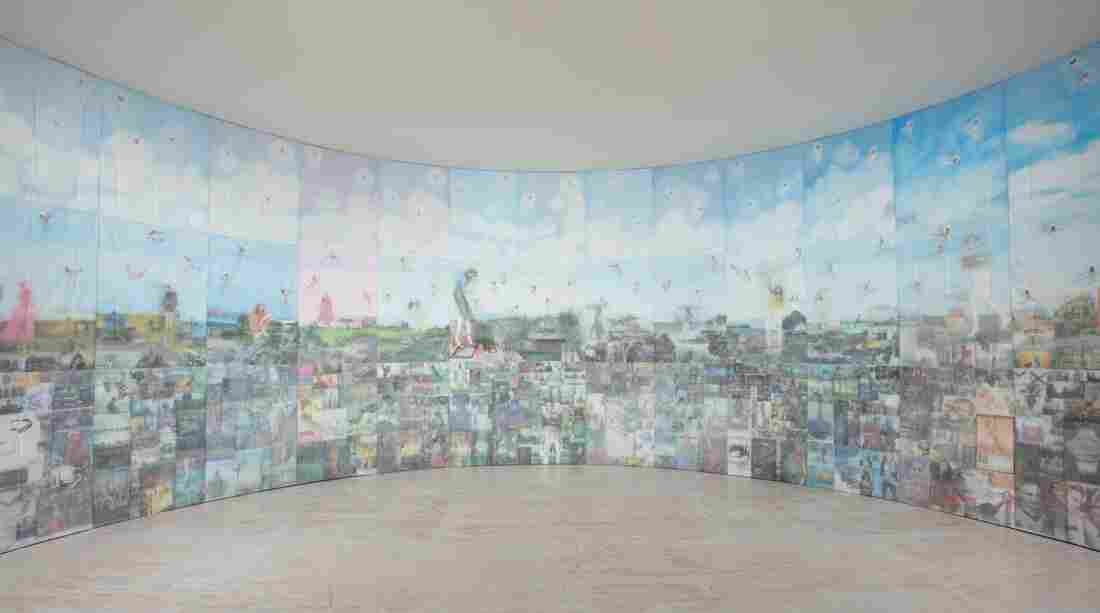