Accessibility links
Sticker Shock: Why Used-Car Prices Are So High The supply of used cars is tight, while demand is high. That can provide a big boost to car owners thinking of selling, but it can make affordable vehicles hard to find. 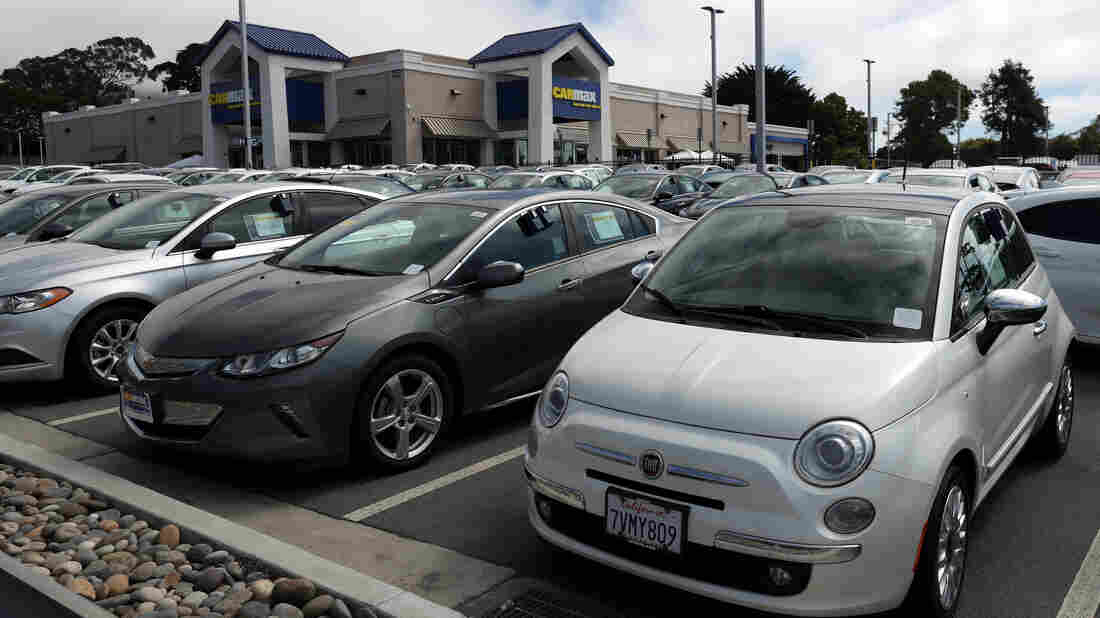 Used vehicles are parked on the sales lot at a CarMax store on Sept. 24 in Colma, Calif. CarMax reported a surge in earnings after used-car prices climbed steadily — and surprisingly — for months. Justin Sullivan/Getty Images hide caption 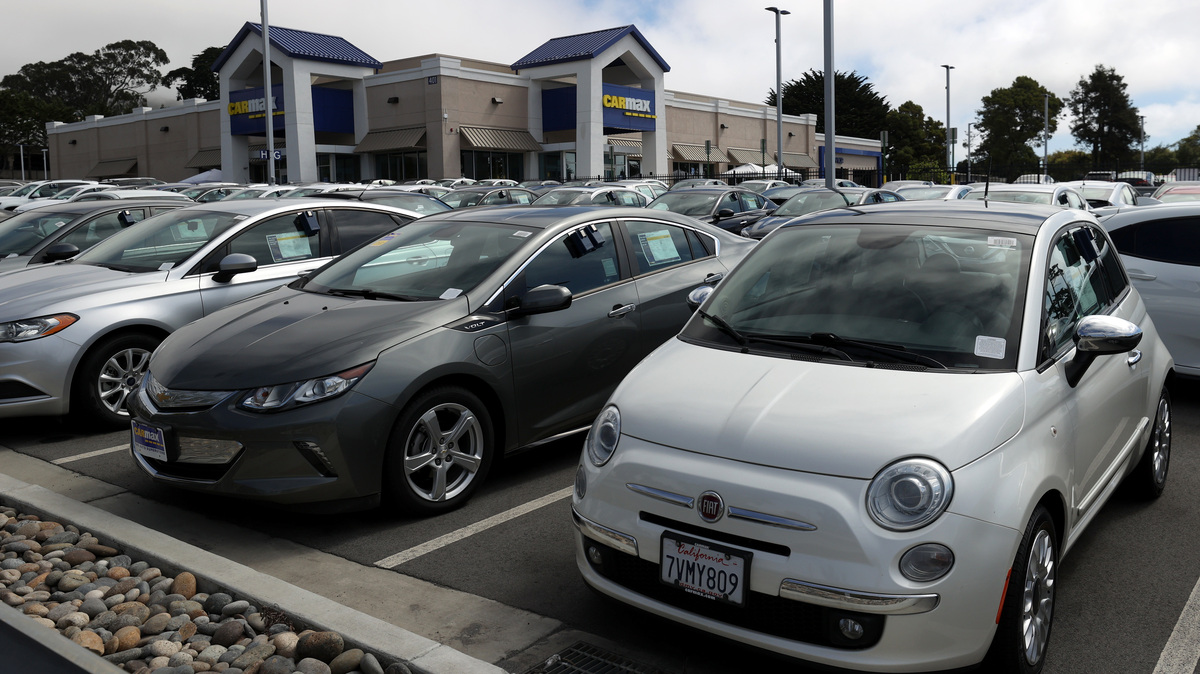 Used vehicles are parked on the sales lot at a CarMax store on Sept. 24 in Colma, Calif. CarMax reported a surge in earnings after used-car prices climbed steadily — and surprisingly — for months.

Aaron Springer of Odenton, Md., wasn't looking to sell his 2014 Volkswagen Jetta SportWagen, which he bought used a couple of years ago.

But Springer heard the used-car market was hot, so he decided he might as well check. To his astonishment, used-car site Carvana offered him $1,500 more than he paid for the vehicle in 2018.

Add used-car values to the list of things turned topsy-turvy in 2020. Springer's experience is exceptional, but it's also a sign of the times: Prices for used cars, trucks and SUVs rose remarkably all summer long as demand far outstripped supply.

According to Cox Automotive, as of September, wholesale used-vehicle values were up 15% compared with last year. And listings on CarGurus are now averaging $22,470, which is over $1,800 more than at the start of 2020.

The rate of growth appears to have calmed down, but prices remain remarkably high.

"Anybody who tracks them ... would be shocked, I think. Almost flabbergasted," says Ivan Drury, the senior director of insights at Edmunds, the automotive information company.

Drury, like Springer, felt the benefit firsthand. He bought two cars last year and sold them both a couple of months ago.

He broke even on one vehicle and made money off the other, which Drury calls "remarkable, to say the least."

This spring, when the coronavirus pandemic started to spread, auto plants temporarily shut down operations for safety. That has created a shortage of new-car inventory, pushing more people onto the used-car market.

Meanwhile, plenty of people are looking for cars. Partly that's because of concerns over the safety of carpooling or riding public transit (although transit systems are taking steps to promote safety).

There was a policy-based boost in demand as well, as buyers put their coronavirus relief checks toward new vehicles.

"People were able to come up with a little bit more money down," says used-car salesman Orby Galarza of Harrisonburg, Va., who saw a direct connection between relief checks and sales.

In short, the pandemic reduced the supply of cars at the same time it increased demand for them. It's Econ 101 — the result was prices went up. And up. And up.

For those who have good-condition cars to sell or trade in, this is a big boost. Some drivers are putting that extra money toward even pricier brand-new cars.

Drivers who lease vehicles can also benefit from these rising prices if their leases are ending soon. The buyout price that was set at the start of the lease, based on projected value, might now be thousands of dollars less than the vehicle's actual value.

That means drivers can buy out their leases, then turn around to trade that vehicle in or sell it for cash — and immediately turn a tidy profit.

But for buyers looking for affordable used vehicles, the spiking prices are bad news, and the shortage of inventory can lead to frustration.

It's another sign of how the pandemic and the economic upheaval it created are hitting the haves and the have-nots very differently.

Some drivers are stuck with older, less reliable vehicles that they are driving into the ground, waiting for the market to calm down enough so that they can afford to buy a replacement. Others don't have that choice.

Danielle Jennings of Baltimore needed a new vehicle this summer after her 17-year-old car finally gave up the ghost. But she scoured the used-car market for a reliable vehicle in her price range, with no luck.

"I just wanted to be able to get to work and be able to take care of my family," she says. "My back was against the wall."

Jennings, much to her relief, wound up getting a 2013 Chrysler 200 through a nonprofit called Vehicles for Change, which takes donated cars and gives them at a discount to people who need transportation.

Vehicles for Change says it has seen an increase in need because of the pandemic, but because the program requires participants to have a job, it's also finding that many applicants are disqualified.

Vehicle affordability is not a new issue. Even if car prices were dropping instead of rising, many low-income Americans would still struggle with transportation costs.

But this surprising spike in prices certainly isn't helping would-be car buyers on tight budgets. And until prices return to normal, bargains will be few and far between.