Accessibility links
Facebook, Twitter, Google CEOs Testify To Senate: What To Watch For Facebook's Mark Zuckerberg, Twitter's Jack Dorsey and Google's Sundar Pichai go before the Senate Commerce Committee to defend Section 230, a law that protects them from lawsuits over users' posts. 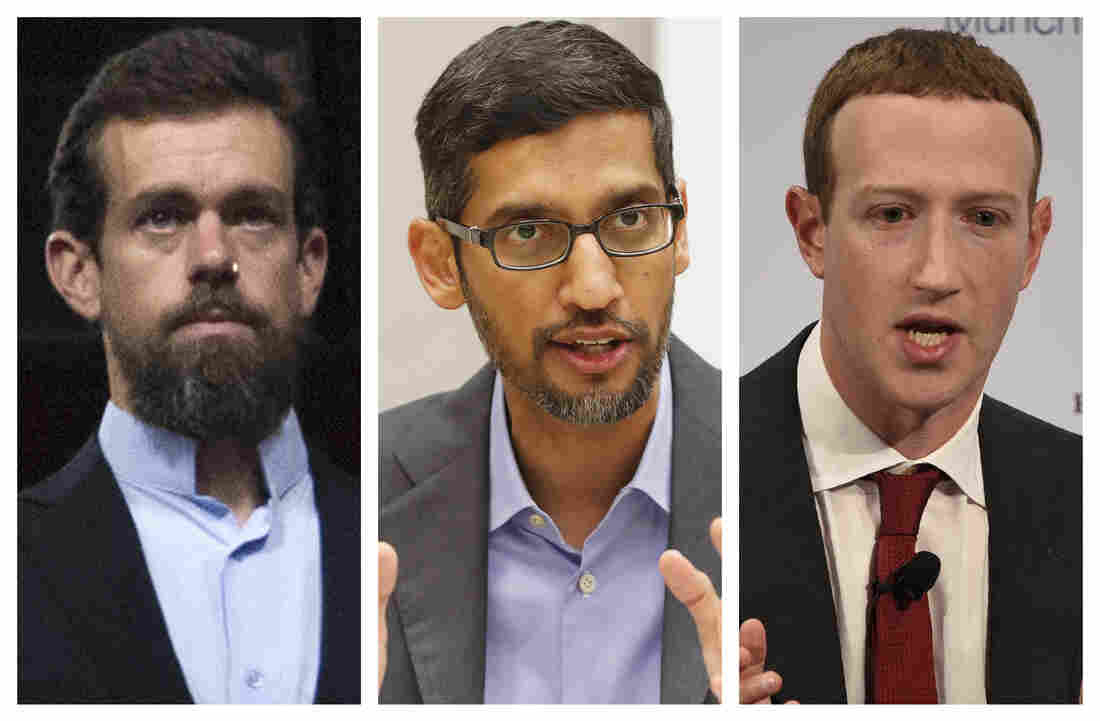 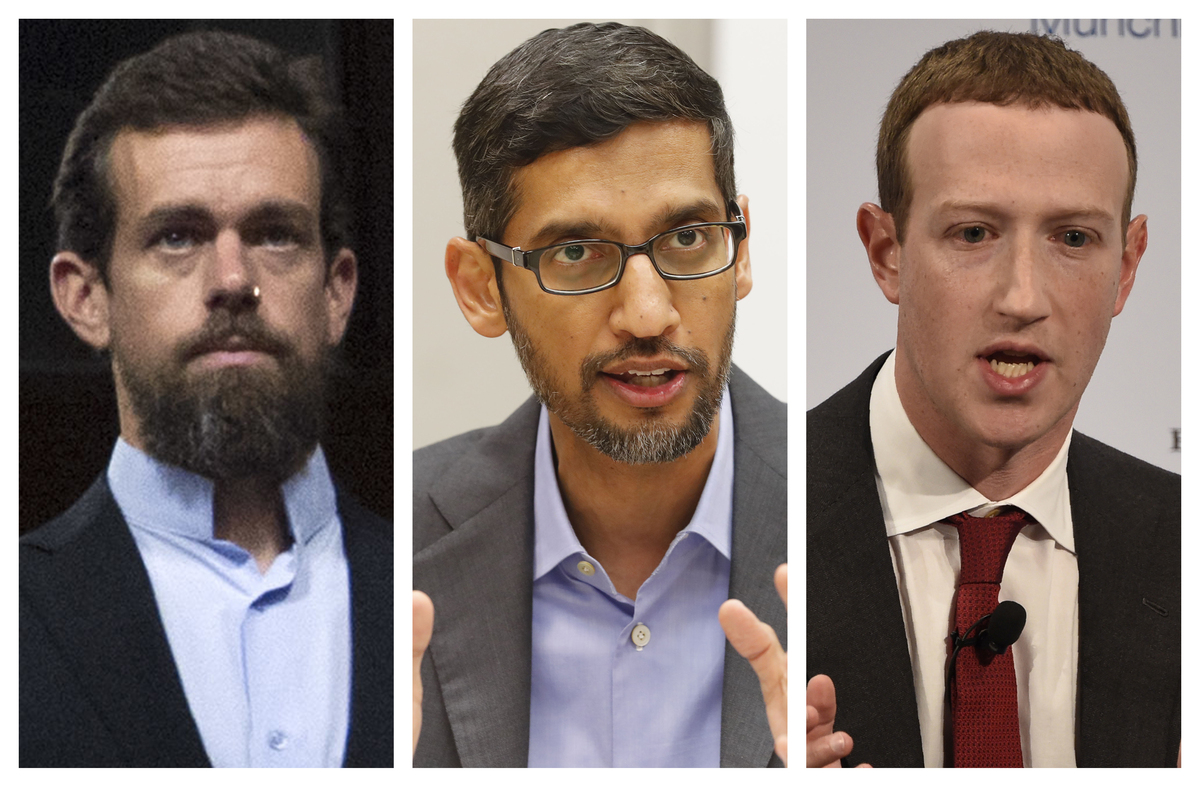 A trio of Silicon Valley's biggest names will be in the hot seat on Wednesday for a U.S. Senate hearing focused on a decades-old legal shield that is newly under fire.

Facebook's Mark Zuckerberg, Twitter's Jack Dorsey and Google's Sundar Pichai are appearing virtually at 10 a.m. ET in front of the Republican-controlled Senate Commerce Committee to answer questions under oath about whether being insulated from lawsuits has enabled Big Tech's "bad behavior."

The tech executives plan to defend Section 230 of the Communication Decency Act, a 1996 law that says websites cannot be held legally responsible for what people post, no matter how offensive or damaging.

Section 230 is "a law that provided more protection for online third-party speech than does any country in the world," wrote Jeff Kosseff in a book about the law entitled the Twenty Six Words that Created the Internet.

Days Before Election, Tech CEOs Defend Themselves From GOP Claims Of Censorship

Indeed, the law allowed companies like Facebook, Twitter and Google to morph into massive operations that permeate almost every aspect of modern life without the fear of crippling lawsuits.

But in recent months, as calls to rein in Big Tech grow louder, Section 230 has become a convenient punching bag for Democrats and Republicans, with lawmakers from both parties advocating for the law to be overhauled or repealed.

What do the CEOs plan to say?

In opening remarks from the executives provided to NPR, all three plan to defend Section 230.

Zuckerberg will say that the law made it possible for every major Internet service to be built and ensured that free expression could thrive on platforms.

Section 230 also allows platforms to police content as they see fit. Without that power, removing hate speech and harassment could result in lawsuits, Zuckerberg plans to say.

"Changing it is a significant decision. However, I believe Congress should update the law to make sure it's working as intended. We support the ideas around transparency and industry collaboration that are being discussed in some of the current bipartisan proposals, and I look forward to a meaningful dialogue about how we might update the law to deal with the problems we face today," Zuckerberg is expected to say.

Twitter's Dorsey intends to back that up, emphasizing how undermining the law would dramatically reshape the online world for the worse.

"Eroding the foundation of Section 230 could collapse how we communicate on the Internet, leaving only a small number of giant and well-funded technology companies," Dorsey is set to testify.

Pichai of Google plans to offer a word of caution to Washington lawmakers.

"As you think about how to shape policy in this important area," Pichai expects to say. "I would urge the Committee to be very thoughtful about any changes to Section 230 and to be very aware of the consequences those changes might have on businesses and consumers."

Repealing Section 230 would have widespread ripple effects. Product comments on Amazon, restaurant reviews on Yelp, entries on Wikipedia and discussions on Reddit are all examples of content that could be impacted by a major overhaul of the law.

In a sense, because of one of President Trump's tweets.

Back in May, Trump tweeted a false claim about mail-in voting, and for the first time, Twitter placed a label on it telling people they should get the facts elsewhere.

But Trump and his Republican allies have not been alone in railing against Section 230. Democrats in Congress have also sharply criticized the law. Democratic presidential candidate Joe Biden says it would be "revoked immediately." Supreme Court Justice Clarence Thomas argued earlier this month for a "paring back the sweeping immunity" Section 230 provides to tech companies.

In a reversal of its previous position, the Federal Communications Commission's Trump-appointed chairman last week announced an effort to "clarify the scope" of the law, something critics said exceeds the power of the commission.

Critics of the president questioned the timing of the new scrutiny on the law just days before the election.

"The timing is conspicuous and troubling," said Santa Clara University law professor Eric Goldman in an interview. "It seems designed to appeal to Trump's core voters to give the impression that there's a problem with Big Tech and Trump is fixing it."

If history is any guide, Republicans will use Wednesday as an opportunity to confront the tech CEOs about the notion that Facebook and Twitter are biased against conservatives, as they did in July, when tech executives were supposed to sit for questions about the market power of the companies.

Recently, Republicans pointed to Facebook and Twitter's decision to suppress links on the platforms to a New York Post story about Hunter Biden, Joe Biden's son. The article was underpinned by shaky sourcing that raised red flags among seasoned investigative reporters.

Any time a platform places a warning label or removes content favorable for conservatives, Republicans reupp grievances that social media companies are driven by an anti-conservative agenda.

Yet rigorous research has demonstrated that social media provides a megaphone for conservative stories and voices, sometimes even helping fringe right-wing views reach many millions of people.

Steven Johnson, a data scientist at the University of Virginia, recently finished a study looking at how nearly 200,000 people used social media over four years.

When asked if there is any proof that conservative content is being systematically suppressed on Facebook, by far the largest social network, Johnson was quick to respond.

"Quite the opposite," he said. "Our research findings are consistent with the Facebook algorithms prioritizing conservative content, at least for its most conservative users."

Johnson found that the more time people spend on Facebook, the more polarized their online news coverage becomes. For conservatives, however, the extremeness of the content was far more pronounced.