Accessibility links
France, Turkey And The Charlie Hebdo Cartoons: What's Behind The Dispute? The increased friction follows the beheading of a French teacher after he showed his class caricatures of the Prophet Mohammad. The two countries have sharp foreign policy differences. 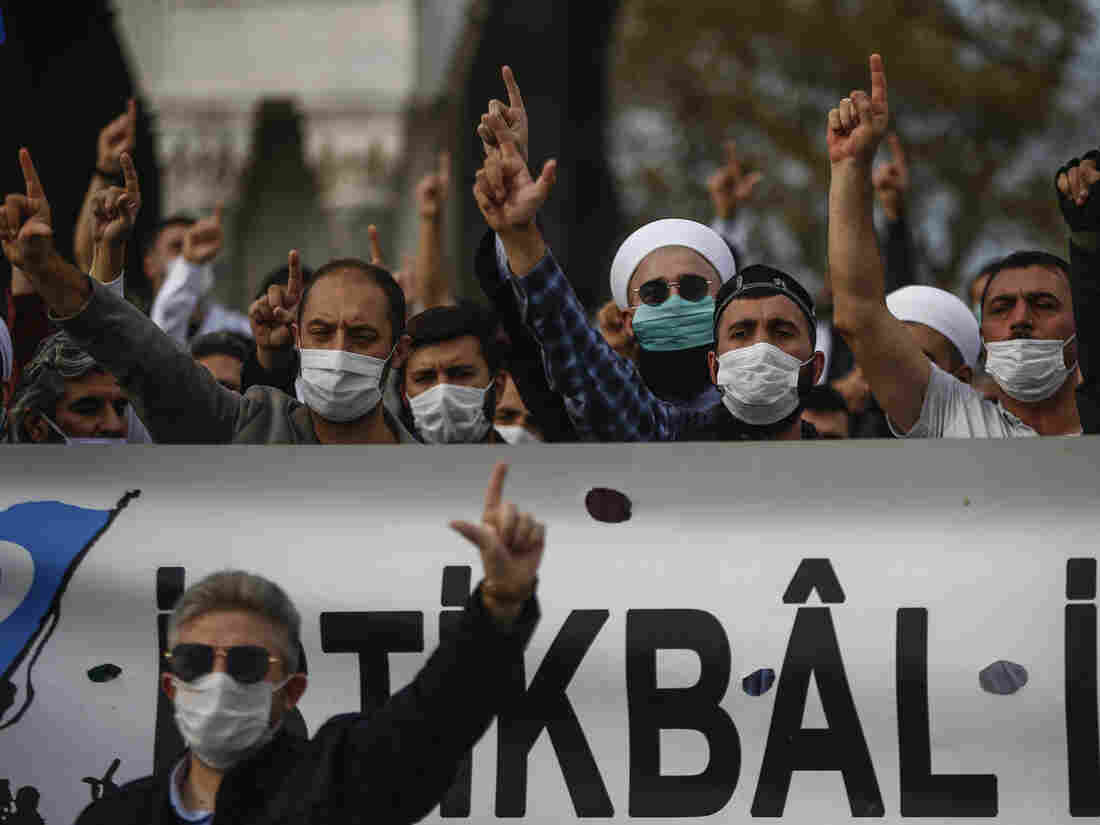 Demonstrators chant slogans during an anti-France protest in Istanbul on Sunday, as tensions rise between the two countries. Emrah Gurel/AP hide caption 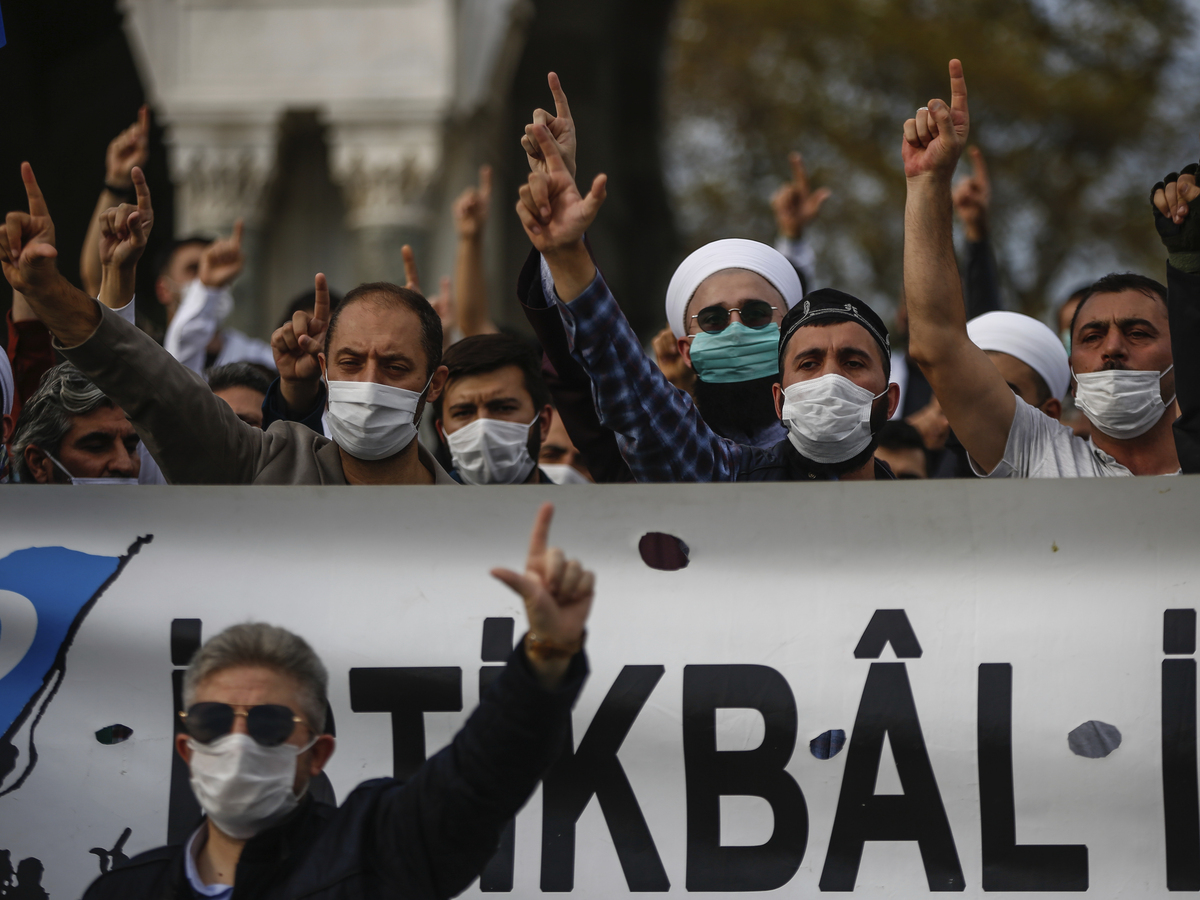 Demonstrators chant slogans during an anti-France protest in Istanbul on Sunday, as tensions rise between the two countries.

Tensions between Turkey and France are rising, as Turkish President Recep Tayyip Erdogan calls for a boycott on French good and slams French President Emmanuel Macron's call for a "French Islam."

The increased friction follows the beheading of a teacher in France after he showed his class caricatures of the Prophet Mohammad published by the satirical magazine Charlie Hebdo.

Schoolteacher Samuel Paty was killed after a lesson on freedom of speech to his civics class involving the cartoons. In Macron's eulogy at Paty's funeral, he said France would never give up its liberties, or its cartoons.

"We will continue, professor. We will defend the freedom that you taught so well and we will promote secularism, we will not renounce caricatures, drawings, even if others retreat," Macron said earlier this month. "We will continue the fight for freedom and the freedom of which you are now the face."

Further escalating the tensions, this week's edition of Charlie Hebdo came out Wednesday and featuring a caricature of Erdogan in his underwear, lifting a Muslim woman's skirt. Erdogan said he hadn't looked at the image, but he condemned the magazine for what he called "a grave insult to my prophet."

Erdogan's spokesman said the "despicable images" were the latest example of Macron's "anti-Muslim agenda." The state prosecutor's office in Ankara opened an investigation into the magazine's leadership. Under Turkish law, insulting the president can lead to a prison term.

The French-Turkish feud has bubbled for weeks, with Macron cracking down on Muslims thought to have links to radical groups following the latest attack and calling Islam a religion "in crisis."

Erdogan has been harsh in his response, declaring that Macron needs "mental checks."

Other Muslim-majority countries have weighed in. Egyptian President Abdel-Fattah el-Sissi called for respect for the views of others, and opposed the use of violence to defend religious beliefs. Pakistan, Malaysia, Saudi Arabia and Iran all condemned Macron.

Erdogan has long seen himself as Islam's most prominent defender, especially against perceived slights from Europe. In 2017, Turkey expelled the Dutch ambassador amid a row over Holland's refusal to allow pro-Erdogan political rallies on its soil.

But Erdogan's favorite target seems to be France, a country with which Turkey has some sharp foreign policy differences.

Macron recently accused Turkey of escalating the conflict between Azerbaijan and Armenia over the disputed Nagorno-Karabakh region. He said French intelligence showed that Turkey sent a group of Syrian mercenaries to help Turkey's Muslim ally fight the Armenians.

Paris and Ankara support opposing sides in the conflict in Libya, with France backing Benghazi-based General Khalifa Hifter and Turkey supporting the U.N.–recognized government in Tripoli, which beat back Hifter's attempted attack on the Libyan capital this spring after months of fighting.

Tensions spiked in the Mediterranean earlier this year, when Turkish military vessels prevented a French frigate from searching a cargo ship suspected of violating a U.N. arms embargo by carrying weapons to Libya.

France is also leading the international criticism of Turkish moves to explore for natural gas in the Eastern Mediterranean in areas claimed by Cyprus. Elsewhere, the two countries have foreign policy differences in Syria, with France being more supportive of Kurdish fighters that Turkey views as terrorists.

As the feud over the Charlie Hebdo cartoons continued, Paris recalled its ambassador from Turkey in protest. Other European countries, meanwhile, have come to France's defense.

But European leaders also recall Erdogan's threat to send millions of Syrian refugees and migrants toward Europe if it didn't support Turkey's efforts to shelter and provide for the refugees.

If the boycott efforts are short-lived, this flap could die down relatively quickly. But the prickly relations between Turkey and Europe are likely to continue for some time.