Accessibility links
Supreme Court Allows Ballot Extensions In Pennsylvania, North Carolina, For Now It was the second time the high court refused a GOP effort to block a three-day extension for receiving absentee ballots in Pennsylvania. Justice Amy Coney Barrett did not participate in either case. 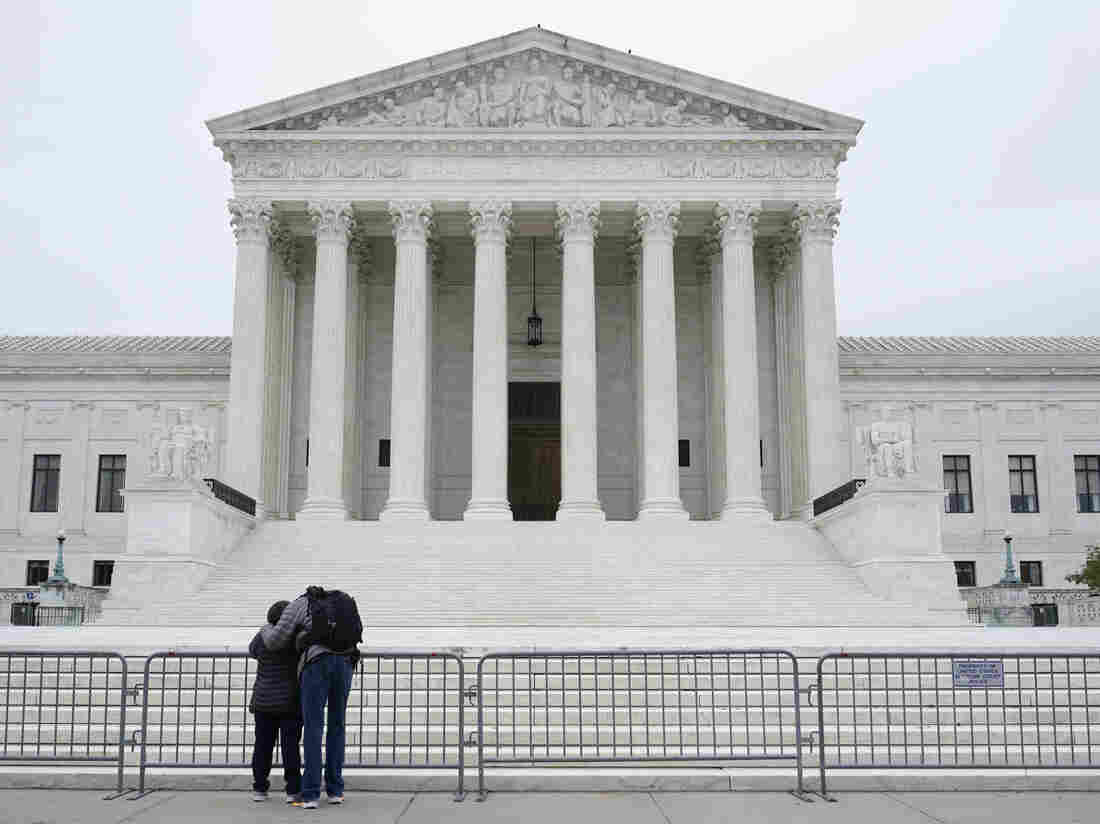 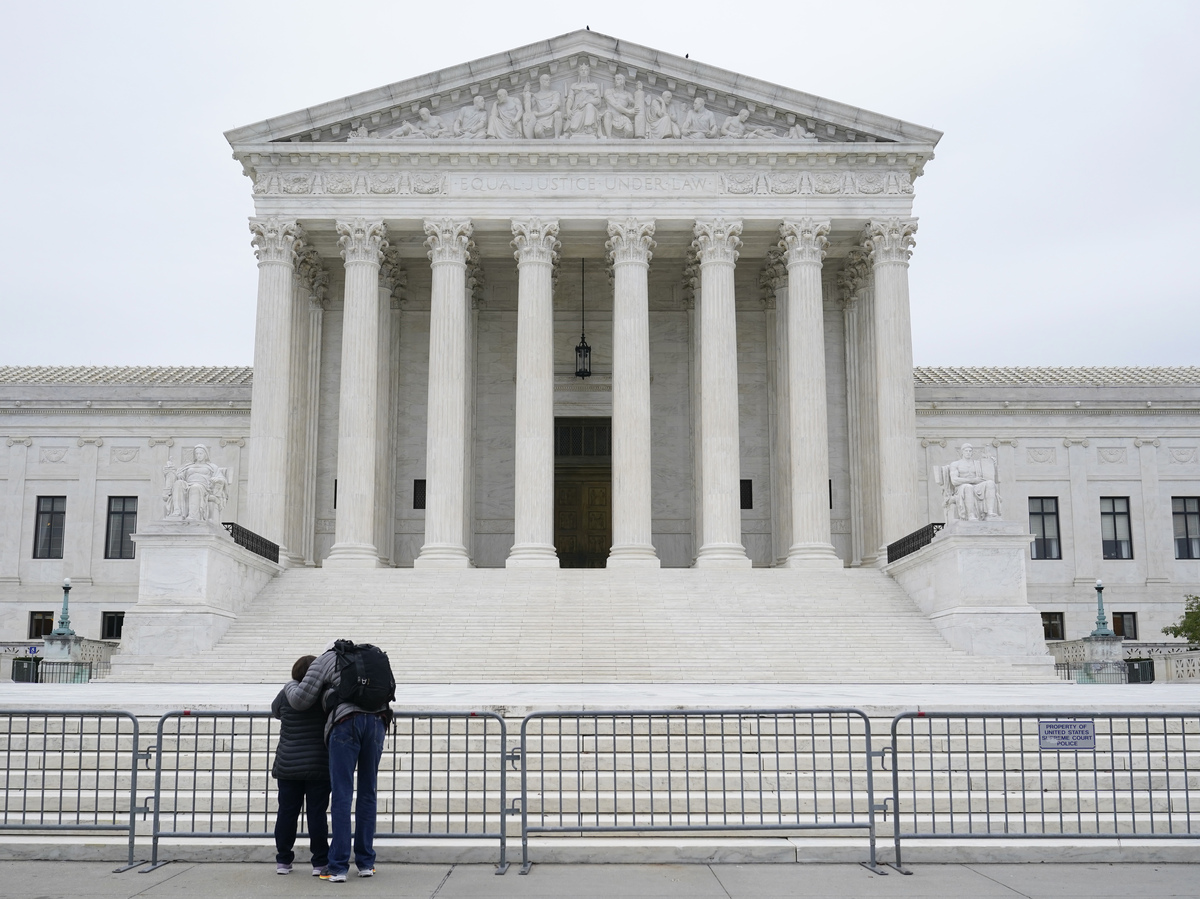 The U.S. Supreme Court in Washington

The U.S. Supreme Court has refused, for a second time, a Republican Party effort to block a three-day extension for receiving absentee ballots in Pennsylvania. That means that at least until after the election, the court will not intervene in the way the state conducts its vote count.

The court in a second case from North Carolina, also refused late Wednesday to block a similar extension of time to count votes, an extension put into place by the state election board.

New Justice Amy Coney Barrett did not participate in either case. Her decision was particularly noteworthy because her vote might or might not have affected the outcome and because a Pennsylvania county had earlier this week filed, and then withdrawn, a formal request for the new justice to recuse herself.

A highly unusual statement issued by the court press office said that Barrett did not participate because of the need for a "prompt resolution" of the question before the court, and because the new justice "had not had time to fully review" the written arguments submitted to the court.

The practical effect of the decisions in both cases is to leave in place the extended vote-counting period, at least for now.

In the Pennsylvania case, the ruling left in place a decision by the state Supreme Court, based on the state constitution. It extended by three days the period for counting absentee ballots posted by Election Day. Last week the Supreme Court upheld the state court decision by a tie vote, with Chief Justice John Roberts joining the court's three liberals, and later explaining that state courts are free to interpret their own state constitutions in voting cases.

This week the state Republican Party came back to the court seeking a second bite at the apple before Election Day. And this time it failed again, perhaps by a more decisive vote. Only three justices noted their dissent this time — Justices Samuel Alito, Clarence Thomas and Neil Gorsuch. They wanted to hear and decide the question presented by the Republican Party prior to next week's election. The same three dissented in the North Carolina case, too.

The court, of course, could still hear the Pennsylvania case after the election, especially if the vote in the state is close and pivotal to the outcome of the general election. Indeed, as Alito observed in his dissenting opinion, Pennsylvania officials have agreed to instruct boards of elections throughout the state to segregate ballots received received by 8 p.m. on Nov. 3, when the polls close, and 5 p.m. Nov. 6, three days later.

The coronavirus epidemic has caused judges in many states to allow greater protections for voters. But the court's conservative majority, until now, has resisted most of those changes if ordered by federal courts under a doctrine that dates back to 1989, and instructs the federal courts not to intervene close to an election. State courts, however, have been accorded far more leeway; the idea being that they are best able to interpret their own state laws and constitutions.

This week Justice Brett Kavanaugh threw a spanner into the long-held understanding of that principle in a case from Wisconsin. Writing for himself, Alito, Thomas and Gorsuch, Kavanaugh said that when a state court, interpreting a state constitutional provision on voting rights, alters a statute to conform with the state constitution, that action is presumptively illegitimate. Chief Justice Roberts, however, had a very different view. While he agreed that the actions of a federal judge in the Wisconsin case stepped over the line, the the Pennsylvania case was different, he said, because the state court presumptively had the right to interpret the state's constitution and laws.

What made Kavanaugh's opinion particularly noteworthy was that it contained multiple factual and important errors, and misrepresented the views of noted voting rights scholar Richard Pildes.

About the kindest critique of the opinion came from voting rights expert Richard Hasen, who called it "sloppy."

The errors ranged from clear factual errors, to an attempt to resurrect Bush v. Gore, and reframe it as a "unanimous" holding that the the Supreme Court must police state courts' interpretation of their own state election laws. In fact, however, only three justices subscribed to that view in the case that decided the 2000 presidential election. And two members of the five-justice majority, Sandra Day O'Connor and Anthony Kennedy, specifically balked at that assertion, ultimately endorsing an entirely different rationale. Bush v. Gore has always been viewed as a ticket for this train only. It has never been cited as precedent in any Supreme Court opinion since then — until Kavanaugh's opinion this week.

As critics have noted, Kavanaugh, as well as Barrett and Roberts, were part of the team that worked for Bush in that case. So the blowback against Kavanaugh's flawed opinion on Monday in the Wisconsin case may be why the court in announcing its order in the Pennsylvania case on Wednesday night, said "additional opinions may follow."