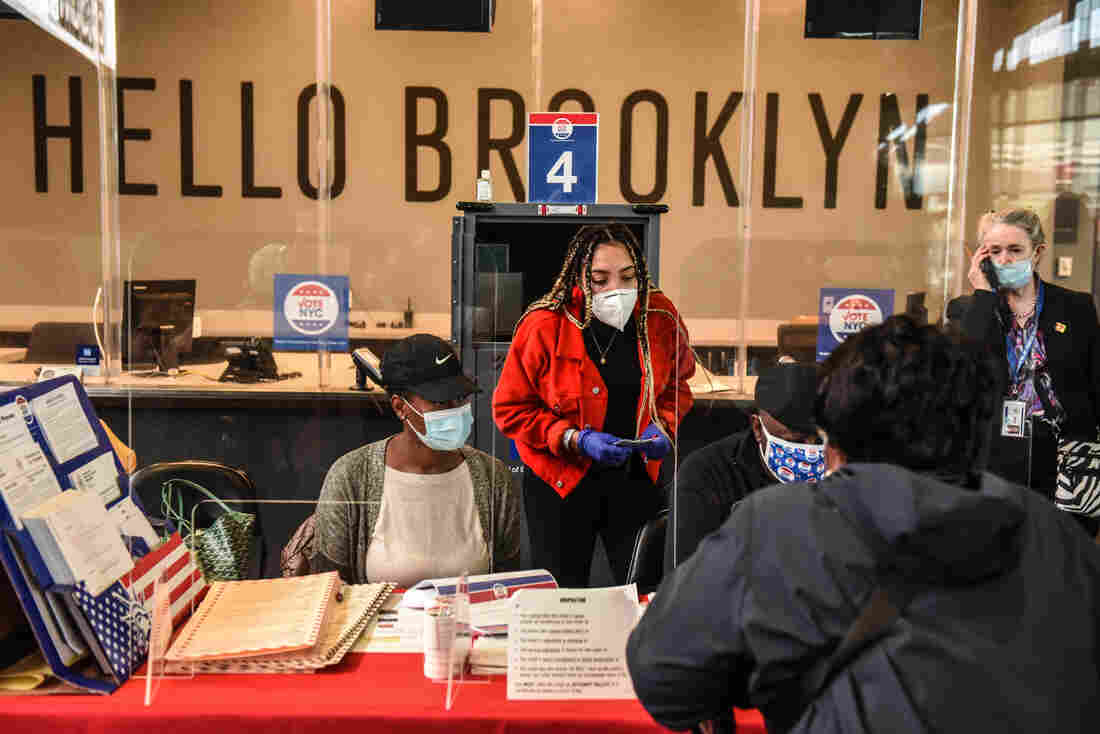 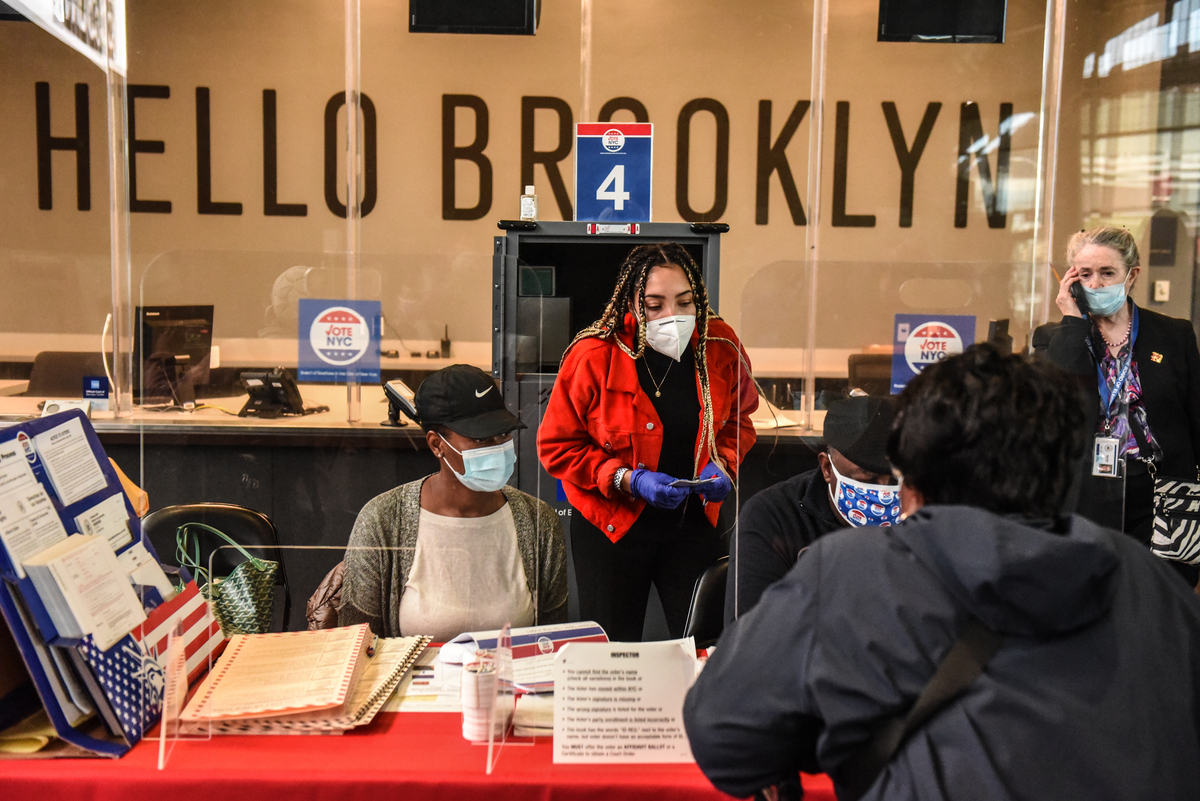 Poll workers check in a voter Oct. 24 at the Barclays Center in New York City.

Months ago, as the primary season was unfolding, election experts began to sound the alarm on what they saw as a glaring threat to a smooth voting process come fall: a shortage of poll workers.

The workers, who are responsible for managing polling places and assisting voters, are typically over 60 years old, an age group that faces higher risks for complications with the coronavirus. Election officials feared the ongoing pandemic would prevent tried-and-true staffers from showing up to work. 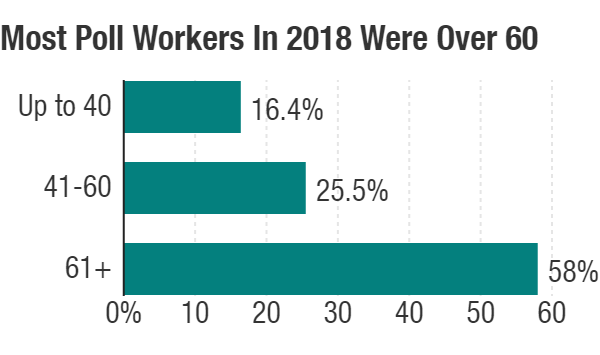 Heavy recruitment efforts unfolded, with nonprofits and celebrities such as NBA star LeBron James organizing young people to get trained on how to staff the polls. One such effort, called Power the Polls, set a goal of recruiting 250,000 new poll workers; it says more than 700,000 people signed up.

With less than a week until Election Day, some election officials are looking at the volunteer numbers and breathing a sigh of relief, while other voting experts say some shortages may remain.

"We were really in dire straits"

"For us, the only good thing to come out of the April 7 [primary] election was that our voters really had a visual of what a poll worker shortage looks like. We made national news for how long our lines were," says Claire Woodall-Vogg, executive director of the Milwaukee Election Commission. "We were really in dire straits and didn't have enough poll workers to operate more polling places."

Woodall-Vogg says the election offices formally closed applications for poll workers two weeks ago once they hit their goal.

Not every place in Wisconsin has fully hit the ideal number of workers, though.

"There are some municipalities, mainly in rural areas, that do still have shortages," she says. "But when I say shortages, it's 'I need five poll workers, I need seven.' It's not like when you're looking at the scope of the city of Milwaukee, saying, 'I need 750.' "

"We've absolutely had to turn folks away"

Arizona's Maricopa County, the country's fourth-most populous county, is another place that feared a lack of poll workers on Election Day.

The elections department looked to hire 1,800 poll workers. Ultimately, it got more than 20,000 requests.

"We've absolutely had to turn folks away, because we don't need 20,000 volunteers for this election," says Megan Gilbertson, communications director for the Maricopa County Elections Department.

The county's polling locations have changed because of the pandemic. Gilbertson says they moved to a "voter center model."

"We moved into large locations that could accommodate physical distancing, from assisted living facilities and small conference rooms in city halls to large locations at our convention centers and retail facilities," she says. "Because these are larger locations and have more check-in stations, we needed more poll workers at each individual location." The number of poll workers per site has shifted from four to 10.

Starting on Wednesday, the county was to have 90 polling locations open, and that number will expand to 175 on Election Day.

Despite high engagement and recruitment, some voting experts warn there are still areas at risk of not having enough poll workers.

Working alongside Carnegie Mellon University, the nonprofit Voter Protection Corps looked at eight key states this election cycle and developed a risk matrix based on public data to identify counties where there's a heightened risk of shortages.

"We looked at 745 counties, and we identified about 485 where, as of two weeks ago, we thought there was a lot more work to be done," says Quentin Palfrey, chair of the Voter Protection Corps.

Palfrey was the voter protection director for Barack Obama's 2008 campaign in Ohio and ran on the Democratic ticket for lieutenant governor of Massachusetts in 2018.

"It's been really encouraging to see an outpouring of interest in serving as a poll worker, but we shouldn't let up," he says.

"We should make sure there is a large pool of poll workers, particularly as we're seeing spikes in the coronavirus incidence rate in some of these key states. That may affect the willingness of some poll workers to participate, and that's understandable, but also suggests that election officials should build in more capacity in their recruiting to make sure that they have enough folks."

Palfrey suggests a remedy for any possible short-staffing would be for counties to train one extra poll worker for every two poll workers needed.

It's a strategy Michigan Secretary of State Jocelyn Benson embraced early, boosting recruitment efforts in the spring because of the pandemic.

"We launched an effort called Democracy MVP, recognizing that our most valuable players in our democracy are our election workers," she says.

As of now, Michigan has recruited more than 32,000 poll workers, a number Benson says far exceeds the needs of the state, which has 5,000 precincts.

"It's enabled us not only to ensure all of our precincts are fully staffed and ready to go for Tuesday, but also have a reserve corps in place of a thousand standby workers," Benson says, calling the reserve list the "backup A team."

On Election Day in Michigan, over 70 staffers throughout the state will check in with clerks in each precinct to identify any unexpected vacancies and then start deploying the backup poll workers.

Benson says they're also putting in effort to maintain contact with the newly trained poll workers.

"Particularly in areas where we've seen high levels of no-shows in the past like Detroit, we've created an ongoing communication system so we're not just recruiting someone, training them and telling them where to show up on Election Day," she says. "We're consistently staying in contact with them, offering them additional trainings, webinars, making them feel like they're part of something bigger, which of course, they are."

For Milwaukee's Woodall-Vogg, she says she's hopeful the recruitment efforts this year will help staff the polls for years to come.

"We really hope that we are building a new generation of poll workers who will view this as their civic responsibility and continue to take the day off from work or school and help out," she says.