Accessibility links
Hundreds Of Iowa Polling Places Shuttered Due To COVID-19 As many as 30% of Iowa voters could be affected by polling place closures, according to a new analysis by NPR, the Center for Public Integrity and Stateline. 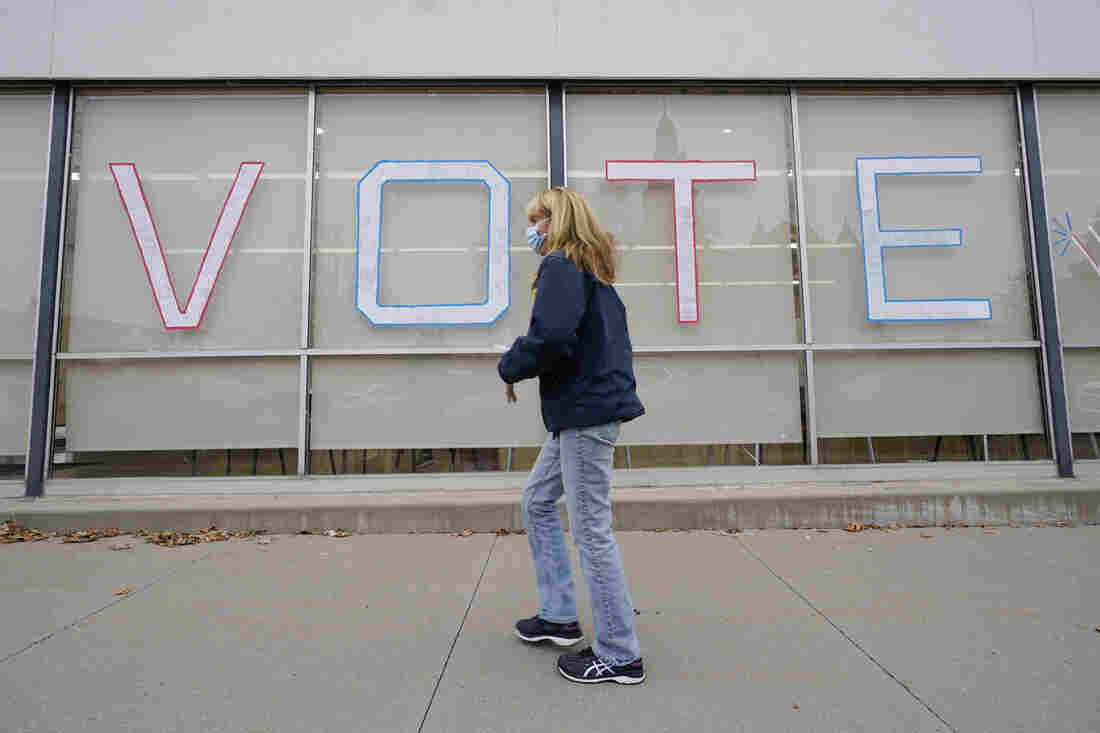 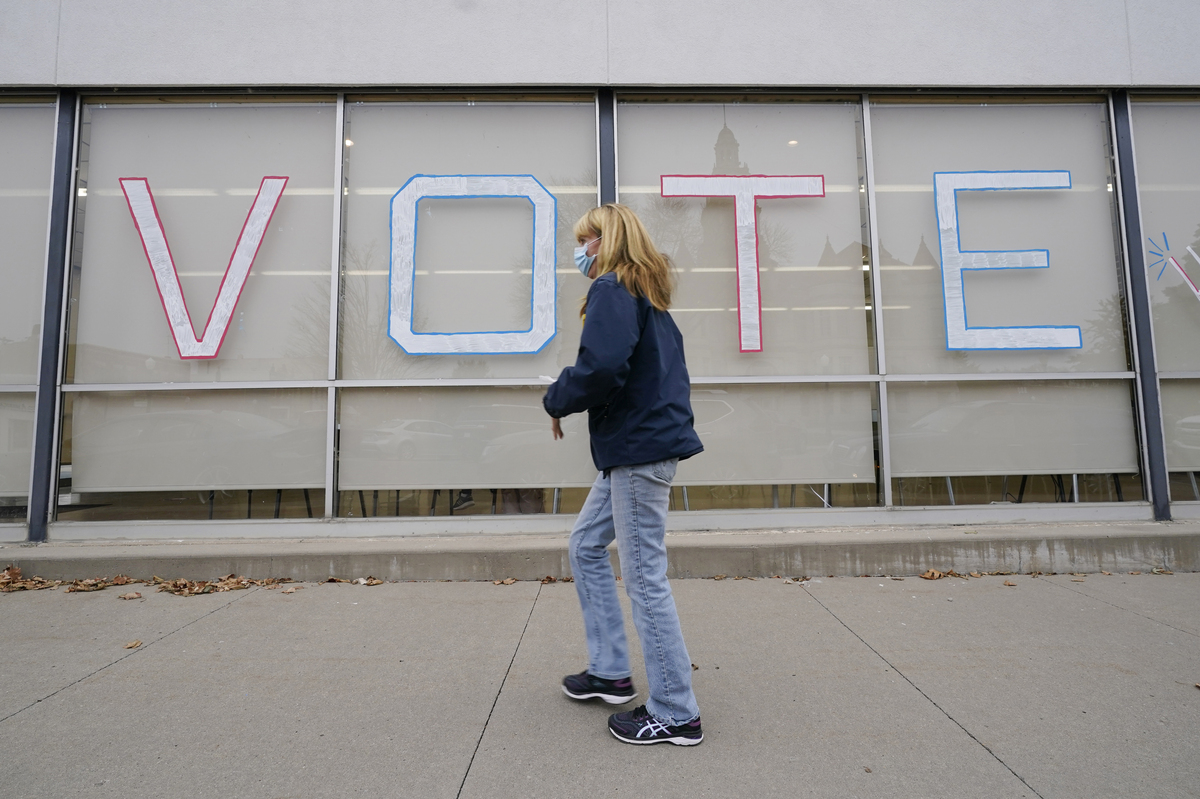 A local resident arrives to cast her ballot during early voting for the general election on Oct. 20 in Adel, Iowa. A new analysis by NPR, the Center for Public Integrity and Stateline reveals that since 2016, 261 polling places in the state have been closed, most due to COVID-19.

This story was co-reported by Iowa Public Radio News, the Center for Public Integrity and NPR.

Iowa voters won't be able to cast their ballot at those locations this Election Day, or at many of the state's other usual polling places. Closures and consolidations have rippled across Iowa due to the coronavirus pandemic, resulting in hundreds fewer Election Day polling places than the state had in 2016.

Nonetheless, Iowa has already seen record turnout, with voters casting more absentee ballots than they ever have before. Early in-person voting has also been underway for weeks. But those who do want to cast a ballot in-person on Election Day should first check to see if their polling place has changed.

"All of us, we are going to have to look up where we need to go. I mean, I'm not sure which place I would go," said Sheena Thomas, a voter in Des Moines. "That's going to be an issue for everybody."

Thomas wasn't able to vote at her usual polling site this year, a senior care center on the west side of the city. She decided it would be easier to vote absentee instead.

Everything about the act of voting in 2020 has been shaken by COVID-19. A record number of ballots have been cast early, either by mail or in person. All over the country, sports teams are turning over their arenas to be used as large-scale, socially distanced polling places.

But in some states, the pandemic has also meant a reduction in the number of polling places, a potential roadblock for voters amid a period of already-heightened stress and confusion. (Find your polling place anywhere in the U.S. here or use Iowa's tool to find polling places in that state.)

Since the 2016 general election, Iowa has lost 261 polling places, according to an analysis by the Center for Public Integrity, Stateline and NPR. The polling place changes vary across the state; while some counties are able to keep all of their sites open, others must close or consolidate half.

Overall, this affects some 670,000 Iowans, 30% of the state's registered voters. Those affected by the changes overwhelmingly live in the state's urban areas, which reliably vote Democratic. And the closures are happening at a time of multiple competitive races in the state, including the presidential contest. 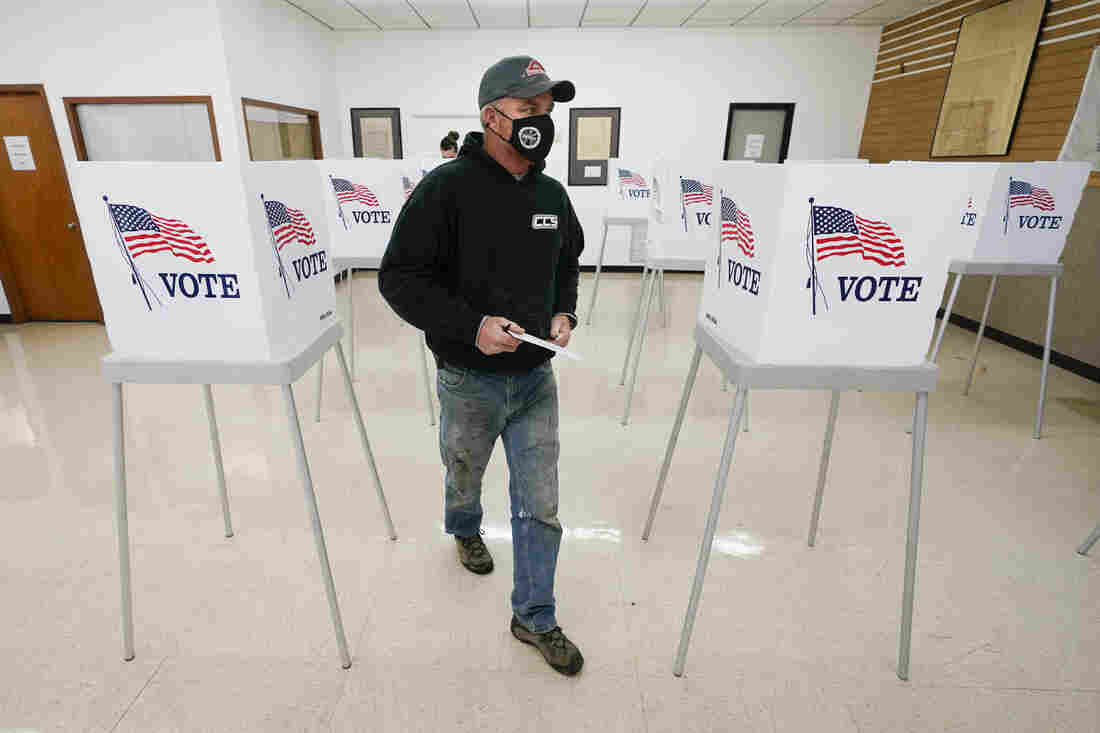 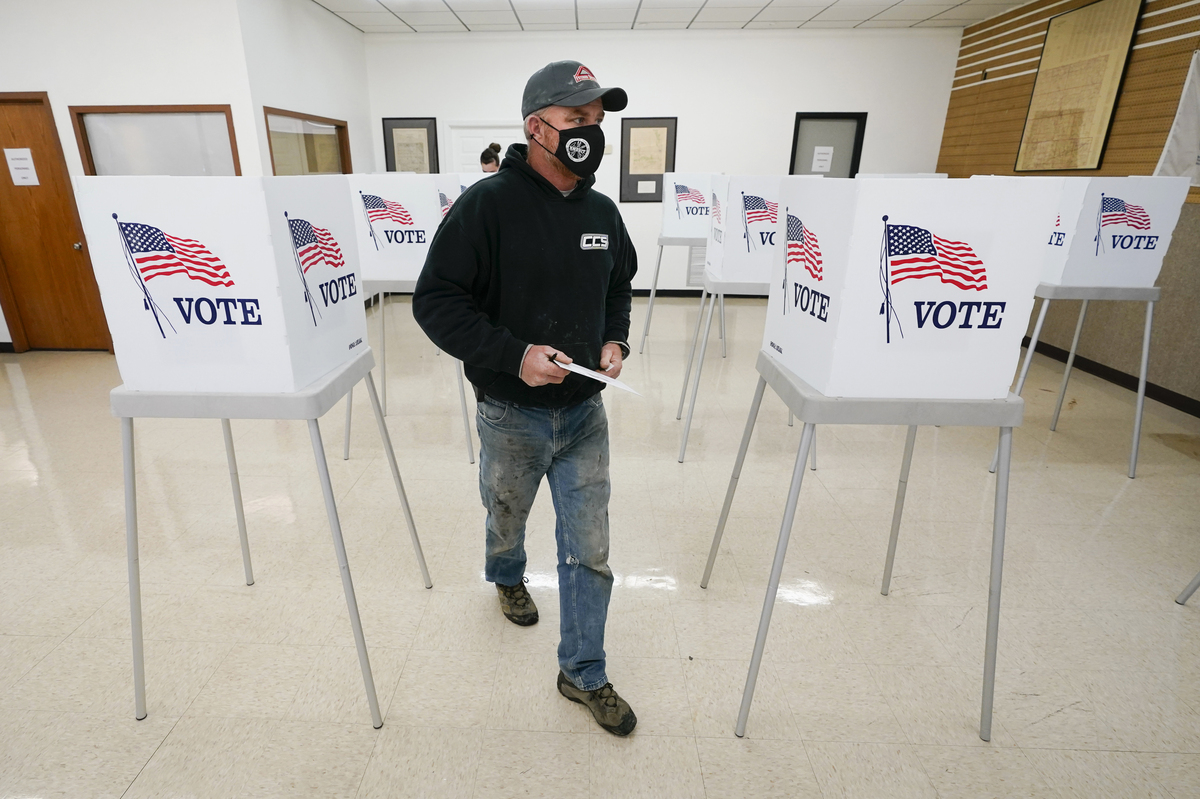 Chris Helps of Earlham, Iowa, makes his way to the ballot box during early voting on Oct. 20 in Adel, Iowa.

This spring, the pandemic prompted unprecedented polling place consolidations during the primaries in jurisdictions across the U.S., sparking an outcry over images of voters standing in hours-long lines in places such as Milwaukee and Atlanta.

The Centers for Disease Control and Prevention called for election administrators to "maintain or increase the total number of polling places available to the public on Election Day to improve the ability to social distance." The guidance also says to avoid increasing the number of potential registered voters assigned to each polling place "unless there is no other option."

The pandemic-related closures follow a scaling back of polling places across the country in recent years as some communities have begun voting primarily by mail or using larger "vote centers," and in the wake of a U.S. Supreme Court decision that limited federal oversight of election administration.

In 2013, the court's Shelby County v. Holder decision struck down a provision of the Voting Rights Act that required jurisdictions with a history of racially discriminatory practices to seek permission from the federal government before making changes to voting policies and procedure. Since then, voting rights advocates have expressed alarm about how polling place closures and relocations may impact communities of color in previously covered states and jurisdictions. Iowa wasn't covered.

In general, "on Election Day, we can anticipate to see long lines in areas where there have been mass closures," said Leigh Chapman, director of the voting rights program at the Leadership Conference on Civil & Human Rights, which has issued reports on polling place closures in places affected by Shelby.

Despite advocates' efforts, local election officials in Iowa have struggled to find poll workers and been kicked out of churches and community centers that don't feel comfortable hosting voters during a pandemic.

Miller has closed or consolidated 37% of his polling places this year.

"I know that may create additional hardships on it, but you know, there's a lot of people that could be volunteering to work the polls that are choosing not to and I understand," Miller said, "but when we said that we need younger people to get involved and stand up this year, we weren't kidding."

Many, if not most Iowans are expected to vote early or absentee this cycle and voters have already broken at least one turnout record.

But for those who want to vote in person on Election Day, research has shown that polling place closures, consolidations and relocations can depress turnout.

"If there's that big of an increase in those other forms of voting, absentee or early, is that enough to offset the consolidation of polling places? Or the closure of certain polling places?" Larimer asked. "I just don't think we know yet."

Finding a new site can be time-consuming and confusing for voters. People with low incomes and people of color may be less able to overcome those barriers. Across the country, Black voters have faced longer wait times at the polls even before the pandemic.

"That's the concern, is voter suppression," Larimer said. "And/or just adding costs to the act of voting, which is something we don't want to do, because it's already hard enough to get people to the polls."

Diverse communities among those affected

The analysis by the Center for Public Integrity, Stateline and NPR found that in Black Hawk County, one of the state's most diverse areas, census tracts with more people of color lost a larger share of polling places than whiter census tracts.

Black Hawk County Auditor Grant Veeder said he didn't account for demographics when he closed or consolidated 30% of his sites. His county includes the city of Waterloo, which is home to the state's largest Black population, proportionally.

"We really didn't use that kind of demographic information," Veeder said. "We were just looking for the places that we needed to make combinations and tried to make as few of them as we could and spread them out as much as we could."

Veeder, like many local election officials, is hoping Iowans take advantage of early and absentee voting, to prevent overcrowding and longer lines at the pared-back polling places.

The prospect of decreasing access to the polls in Black communities isn't exactly surprising for Vikki Brown, chair of the Black Hawk County Democrats.

"It seems that things have always been made harder for us. But we're resilient. And we always find a way to do what we need to do," Brown said. "We overcome."

Iowa voters do have other ways to cast their ballot. Early voting in the state began on Oct. 5 and every county has at least one early voting site. Additionally, no-excuse absentee voting is much more established here than in other states, with 40% of Iowa voters casting an absentee ballot during the 2016 election.

Overall, Iowans tend to vote at higher rates than residents of other states, with turnout often hitting 70% during presidential elections.

Despite everything, Brown is optimistic that voters will find a way, even during a pandemic.

"I'm certain that it's going to make it harder for people to vote. But I am seeing a resolve right now, where people are determined," Brown said. "Whatever you do, we're going to counteract it."

As of Friday, the state had received a record number of absentee ballots.

But how these polling place changes affect turnout could have effects beyond Iowa. Races for the White House, U.S. Senate and multiple House districts in Iowa have all been labeled toss-ups.

The races are so close, Larimer says the polling place changes could affect the outcome, especially down the ballot.