Accessibility links
Within The Early Voting Boom, Youth Turnout Seems To Be Surging More than 6 million voters under 30 have cast early ballots, compared with roughly 2 million at the same time in 2016. The number of first-time voters in that group has doubled in four years. 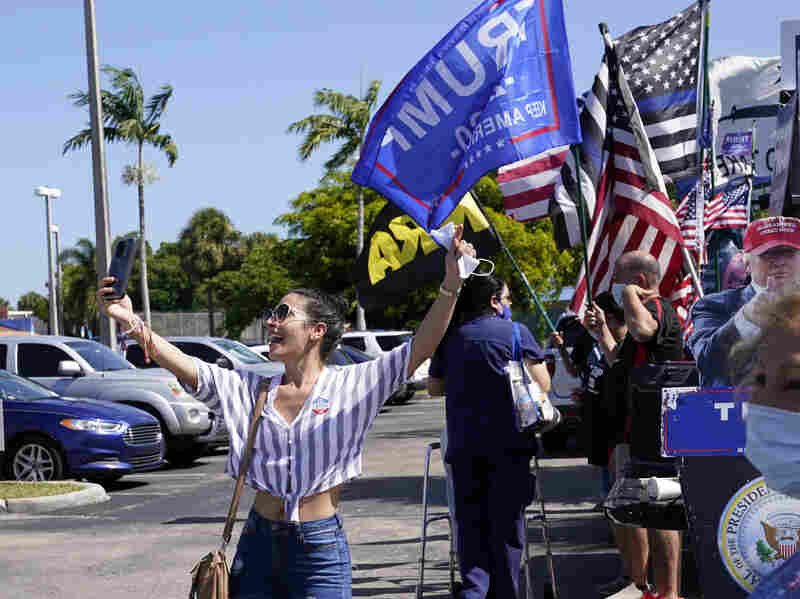 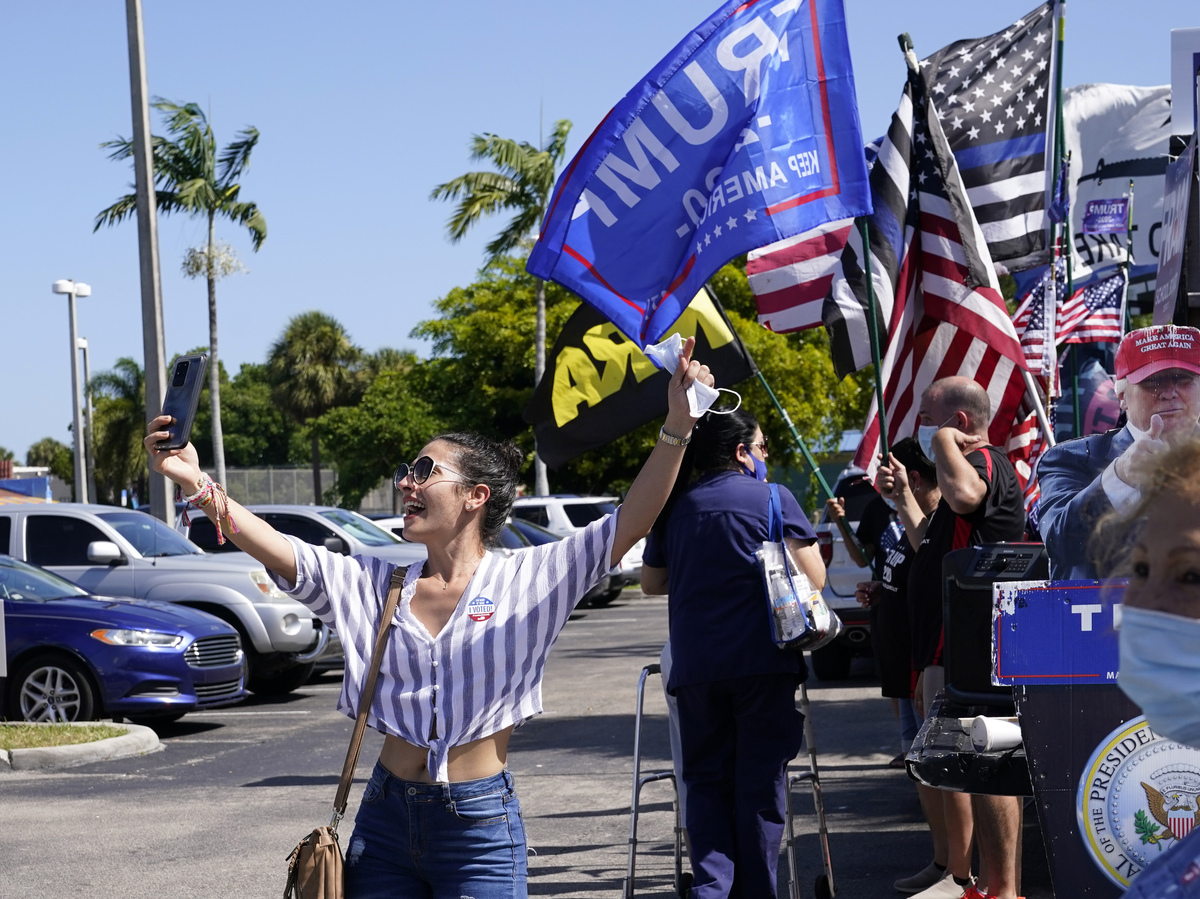 Juliet Roa takes a selfie as supporters of President Trump wave flags outside an early voting location at the John F. Kennedy Library on Tuesday in Hialeah, Fla.

When Sam Peterson enrolled at Morningside College in Sioux City, Iowa, he found the college experience mind-boggling. So too, he says, was figuring out how to vote in the 2018 midterm elections.

"Even though I had helped out with voter registration drives, I still felt confused about how to register. I didn't know what voting by mail was or absentee voting was," said Peterson, who is now 21 and a fellow with the left-leaning NextGen Iowa. "So then, I was just really overwhelmed with school and with this voting thing, and so I didn't vote in 2018."

That year, young voters turned out in historic numbers and were part of the coalition that helped to elect a Democratic House of Representatives. And with days until Election Day, signs have emerged that young voters are poised for another cycle of record turnout, particularly as young people are more likely than their older counterparts to vote in person and later in the election season.

A poll released Monday by Harvard University's Institute of Politics surveyed 18- to 29-year-olds and found that 63% said they would "definitely" vote in the election, which is the highest proportion of respondents in the 20 years that the poll of young voters has been conducted. It is also far higher than in 2016, when the Harvard Youth Poll found that 47% of respondents said they would "definitely" vote in that year's election.

And analyses of the early voting electorate similarly suggest that younger voters are set to make up a larger share than they did in 2016 or 2018.

More than 6 million voters under 30 have already cast early ballots, according to the Democratic data firm TargetSmart, compared with roughly 2 million early votes at the same time in 2016. And, according to TargetSmart CEO Tom Bonier, the number of early voters under 30 who are voting for the first time in their life is more than double the number of first-time voters at this point in the 2016 election.

The groundswell of early voting among young people is visible in a number of the key states that both parties are targeting in this campaign.

The figures are particularly dramatic in Texas, a state that has been known for low overall rates of voter participation, including among young voters. But turnout among young Texans skyrocketed in 2018, and an analysis of early voting suggests that young voters in that state could be on pace to set records this year. More than 800,000 voters under 30 have already voted in Texas, and 66% of them did not vote in 2016.

In Florida, where both President Trump and former Vice President Joe Biden are expected to travel in the campaign's closing days, more than 514,000 young voters have cast their ballot already, hundreds of thousands more than had done so in a similar period ahead of the 2016 election.

This year, Pennsylvania joined more than 30 other states in allowing voting by mail for any reason, also known as no-excuse absentee voting. And like in other states, early voting among the youngest segment of the electorate is on the rise. Already, more than 176,000 young Americans have cast ballots there.

There are many reasons why, historically, young voter turnout has not been as high as other demographic groups. Many young voters are new voters, and the process to register to vote and cast a ballot can be confusing for those who are not familiar with what to expect, the situation that Sam Peterson in Iowa found himself in.

This year in particular, organizers have wrestled with how to get younger Americans to the polls amid a pandemic that has upended life, particularly for college students. Those who may have been planning to vote at or near their college campuses may well have been sent home amid mounting infection rates.

At Morningside College in Iowa, Peterson said he and other organizers have moved online, and they are calling their fellow students to make sure that they have the resources they need and that they have a plan, no matter how they decide to vote.

There are also significant legal hurdles that make it more difficult for young people, particularly young people of color, to vote in many states.

Some states have residency requirements or deadlines for voter registration that make it more difficult for people who are living away from home to participate. And in places that have strict identification laws, young would-be voters who do not have driver's licenses can run up against issues.

Research from the Center for Information and Research on Civic Learning and Engagement at Tufts University also suggests that state laws that disenfranchise people who have been convicted of felonies may have a "chilling effect" on other young people who have been convicted of misdemeanors or other criminal violations, who may in turn come to believe that they are ineligible to vote.

And even setting aside the legal and bureaucratic issues that may crop up for young voters looking to get involved, there is also a psychological component to all of this, experts say: When young people do not think their vote matters, they simply do not vote.

More than 66 million Americans have already cast ballots, a number that puts the country on track for historic levels of voter turnout, with many states already approaching their 2016 vote totals, even before factoring in Election Day turnout this year.

While it is impossible to be definitive, most pollsters and analysts say that a majority of voters under 30 are left-leaning or support Democratic candidates.

The Harvard Youth Poll released earlier this week showed a significant increase in Biden's favorability with voters under 30, with 47% viewing him favorably and 41% unfavorably. In the spring, 34% viewed Biden favorably and 47% viewed him unfavorably.

That same poll also found that young supporters of Trump were more confident than Biden supporters were that their candidate would win the election.