Accessibility links
Philadelphia Police Vow To Release Body Camera Footage In Walter Wallace Shooting Police Commissioner Danielle Outlaw said the footage as well as 911 tapes would be released once Wallace's family has reviewed the materials. The Fraternal Order of Police supports the move. 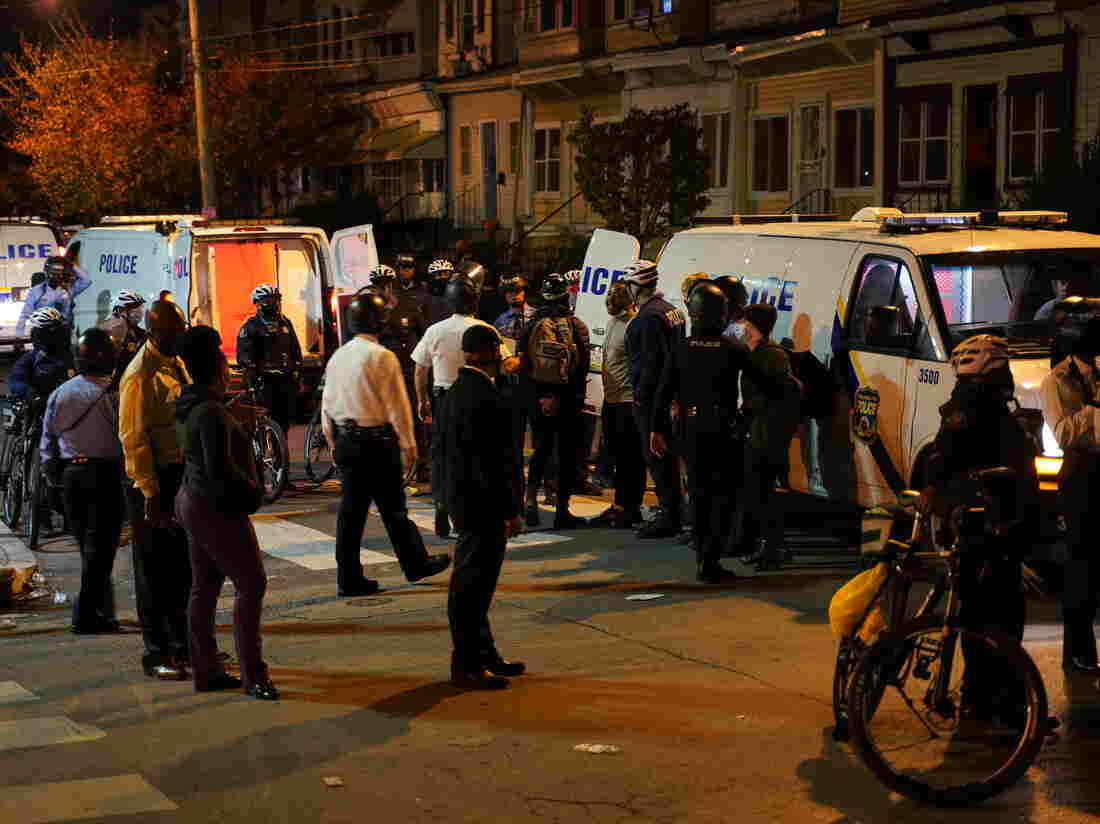 Philadelphia police issue a final warning for curfew violation to protesters at 55th and Pine Streets in West Philadelphia, on Wednesday, the third straight night of protesting and unrest after the fatal shooting of Walter Wallace Jr. by police.

Philadelphia, still on edge following days of protests and unrest that engulfed the city in response to the police killing of a 27-year-old Black man, Walter Wallace Jr., experienced a relatively quiet night Wednesday.

Police Commissioner Danielle Outlaw vowed on Wednesday that the department would release "in the near future" 911 tapes and body camera footage worn by the officers involved with the killing.

While she did not provide a timeline, Outlaw said the materials would be made public after meeting with members of the Wallace family "to ensure they get an opportunity to view the materials first."

If and when the release happens, it will be an extraordinary and rare step for the Philadelphia Police Department to take.

"Although previous police shootings of Black men in Philadelphia have sparked protests, the department has never before released police footage of an officer's shooting," The Philadelphia Inquirer reported.

Releasing the footage and tapes is a move supported by John McNesby, the president of the Fraternal Order of Police Lodge #5. In a video posted to Twitter on Wednesday, he urged city officials to "release what you have."

"We're calling on the city leadership to release the facts of this case. It's not hard," McNesby said. "It's cut and dry. Release what you have. Support your officers, back your officers and let's get a handle on this thing."

Police said Wallace 'advanced toward officers' with a knife

Police said earlier this week that Walter Wallace was armed with a knife and "advanced toward officers." When he did not drop the weapon, two officers fired at him several times, according to law enforcement.

Wallace was experiencing a psychological episode on Monday, according to a family attorney. His mother attempted to calm him, the lawyer said, but was unable to and called 911 for an ambulance. But the police arrived first.

The incident was captured on graphic cellphone video, which was posted to social media and quickly went viral.

There is also new video capturing an encounter between Philadelphia police officers in riot gear and three people in an SUV.

The video shows a slow-moving SUV traveling along a street before being surrounded by several helmeted police officers with riot shields. The officers use batons to shatter the vehicle's windows, then forcibly removes the driver and a passenger.

One officer then reaches into the back of the vehicle and lifts a toddler out.

Police confirm to NPR that an internal investigation into the matter has been launched, but provided no other details.

The Philadelphia City Council on Thursday approved a measure that would bar the use of non-lethal crowd dispersal tactics, including the use of rubber bullets, tear gas and pepper spray on those peacefully protesting.

It affirms "Philadelphians' First Amendment rights to protest and peaceful assembly" according to the resolution.

The council added the timing of the bill's passage – in the wake of the Wallace shooting and on the eve of the upcoming election – was in part to preempt excessive force from being used on future protests.

"As Black Lives Matter protests demanding justice for Walter Wallace Jr. will likely converge with demonstrations related to the elections, Philadelphia's history of using tear gas, rubber bullets, and pepper spray against its own citizens also looms large," according to a statement from the council.

"This resolution indicates Council's desire not to repeat the same mistakes," the statement continued.

A city spokesperson tells NPR the Philadelphia's Law Department will review the measure, adding the "we support the intent of the bill."

Hours after the shooting Monday, McNesby, the FOP president, issued a statement supporting the officers involved, saying they were "being vilified for doing their job and keeping the community safe."

Following the Wallace shooting, parts of the city saw violent clashes between law enforcement in helmets and shields and protesters, some of them hurling objects at police. There were also reports of looting. Police said 30 officers were hurt during clashes late Monday and early Tuesday.

During confrontations Tuesday night into Wednesday morning, police said 81 people were arrested, including 53 for burglary.

Earlier in the day, Philadelphia Mayor Jim Kenney issued an emergency order placing the city under a curfew from Wednesday, 9 p.m. to Tuesday, 6 a.m.

While there were some reports of looting and confrontations, the tense confrontations that gripped Philadelphia for two nights never fully materialized, USA Today reported.

At one point, the newspaper added, just 15 people gathered for a "Justice for Walter Wallace Jr." protest in City Center, but attendees quickly went their separate ways.