Accessibility links
A Mother And Daughter Join Together As Poll Workers 'To Make A Difference' For StoryCorps, Cherie DeBrest tells her 18-year-old daughter, Naima, how civil rights issues inspired her to get more involved in the voting process. 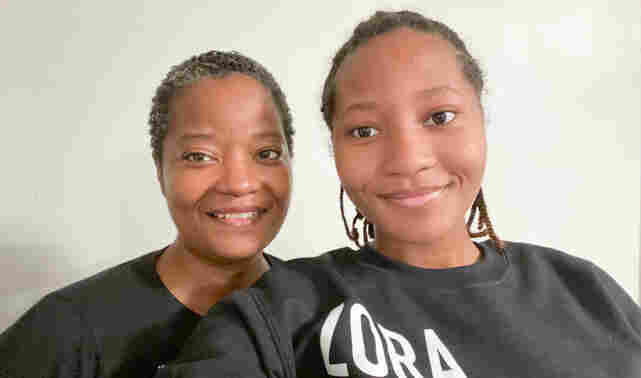 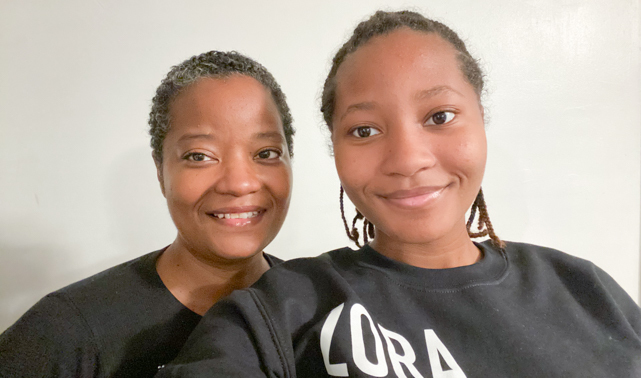 Cherie DeBrest, left, and daughter Naima are planning on working at the polls on Tuesday in Philadelphia.

Cherie DeBrest, 50, cast her first ballot nearly 30 years ago and has voted in every election since.

But last year, she decided to take it a step further, and started working at the polls in her North Philadelphia neighborhood.

Cherie's 18-year-old daughter, Naima, will be working the polls alongside her in Philadelphia this Tuesday.

In a remote StoryCorps conversation last week, Cherie spoke with Naima about what inspired her to get more involved in the voting process.

As a Black woman, Cherie says she feels "duty-bound" to vote in honor of those before her who weren't allowed.

"Growing up and reading about the suffragettes' movement and how, even though women were given the right to vote in 1920, Black women did not successfully cast their vote until the civil rights movement was passed," she said.

When she voted for the first time — a local election in 1991 — Cherie remembered seeing pictures at the polling place of Martin Luther King Jr. and Coretta Scott King casting their first ballot.

"Those images were in my head, and I was actually getting to do that for the first time," Cherie said. "And then, once I got in the booth, I felt a little overwhelmed because I'd never seen a ballot before."

Cherie has long taken voting seriously. In 2008, she organized a voter registration drive at the hospital where she works, in response to fears of voter suppression.

In 2019, Cherie had a busy first day working the polls. The only other poll worker there that day was Kevin Jones, the Judge of Elections for that particular polling station in the Mount Airy neighborhood of Philadelphia.

"There was one gentleman there, Mr. Kevin, doing everything. And he was so happy to see me," she said. "It's a very busy polling station. And the poll was gonna open in a half an hour and then we realized that we were it."

"I felt a lot of pressure. I'd never done it before. I wanted every vote to count. There were times when the line was out the door."

That's when Cherie called her daughter for backup. Naima, 17 years old at the time, and legally allowed to work at the polls in the state.

"I walked from home to the polling place, and you weren't kidding," Naima recalled. "It was just you and Mr. Kevin. So, I just sat down and got to work."

Cherie remembered the relief she felt when her daughter walked through the polling station's front doors. And she was glad that she could spend time together with her daughter doing meaningful work.

"We do things together all the time, but this was a time where we could work shoulder-to-shoulder doing something for our neighbors to make a difference," she said.

Naima asked her mother if she had any fears about working the polls this year.

"I can't allow myself to have any fears about Election Day," Cherie said. "I know what's going on in the world right now. I know that tension is high, but think of all of the people like John Lewis and Dr. King getting ready to walk across Edmund Pettus Bridge. If they can do that, I can show up at the polls and work."

Cherie had words of comfort for Election Day voters who might be feeling overwhelmed — as she did the first time she cast her ballot.

"If you're willing to take the chance to come out in the middle of a pandemic in order to cast your vote in person, I'll be there for you to make sure that you're safe," she said.

Audio produced for Morning Edition by Eleanor Vassili. NPR's Emma Bowman adapted it for the Web.