Accessibility links
NBA Arenas Are Becoming Voting Centers. Will They Draw Big Crowds Too? After NBA players stopped play to protest racial justice issues over the summer, they resumed with a commitment from owners: to turn their arenas into voting precincts. Go inside one of them. 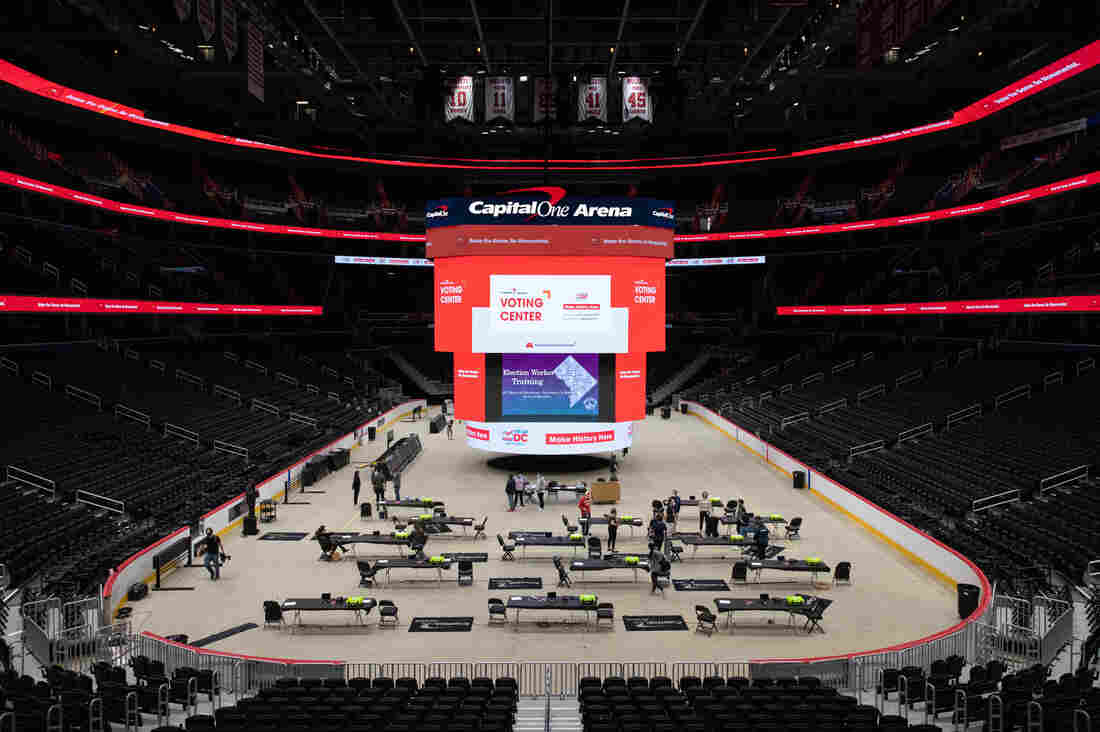 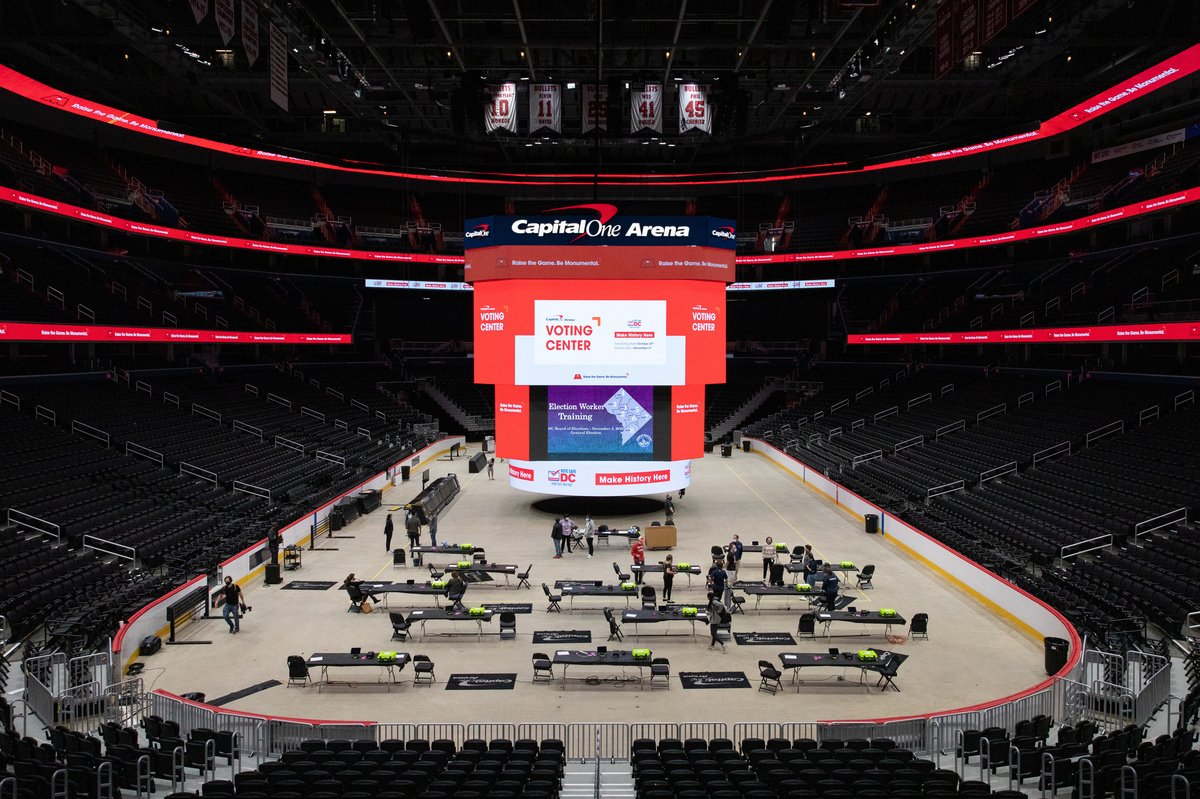 Voting trainers prepare to instruct poll workers in preparation for early voting at Capital One Arena in Washington, D.C., on Oct. 19.

Throughout his eight-year career as the Washington Wizards' starting shooting guard, Bradley Beal has scored more than 11,000 points. He's made two All Star teams and he's hit over a thousand three-pointers.

One thing he hasn't done in all that time: Vote.

"I can selfishly say I was that person four years ago, and eight years ago," Beal said, as his home court, Capital One Arena, was being announced as a voting center this fall. "I was someone who didn't take registration seriously, and I was someone who thought my vote didn't count."

In all, 20 NBA arenas, and dozens more sports facilities, are being repurposed to support voting this year. That's being driven by players like Beal speaking out louder about voting than they ever have before. 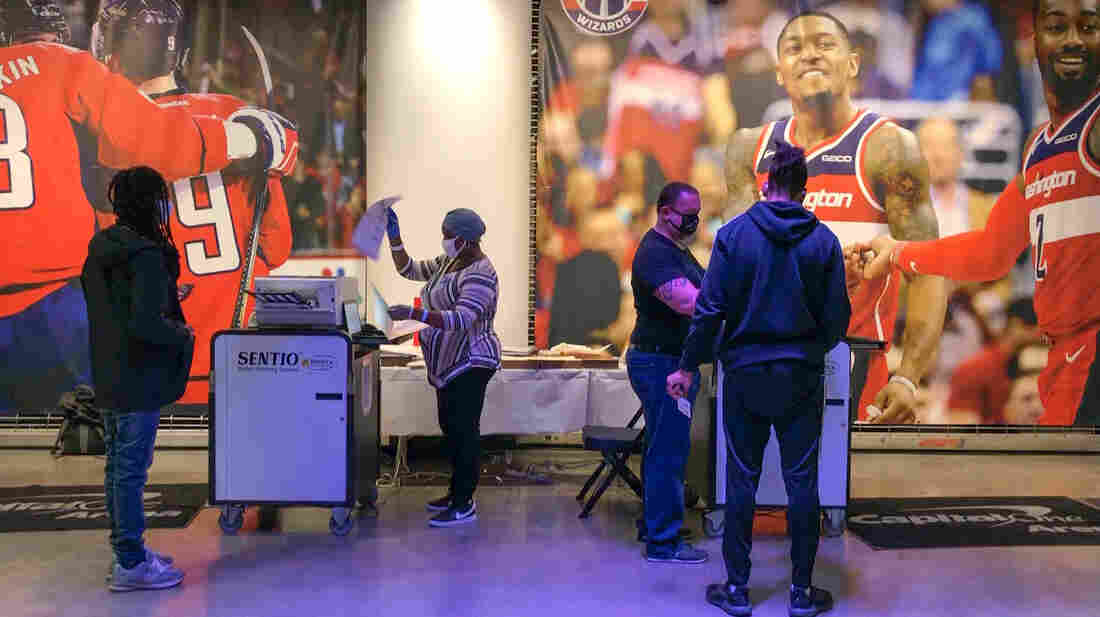 Voters cast their digital ballots on the first day of early voting at Capital One Arena in Washington, D.C., U.S., on Tuesday. Amanda Andrade-Rhoades for NPR hide caption

The LeBron James-founded organization More Than A Vote has coordinated much of those efforts. It also has poured funding into efforts such as fighting misinformation and poll worker recruitment.

"I had a conversation with my parents, my grandparents ... just understanding what they went through in order to have that right to vote, in order to have that privilege for their voice to be heard," Beal said. "I clearly took that for granted for eight to 10 years, and so I definitely want to nip that in the bud."

The big sports arenas like the one in the center of downtown Washington, D.C., are filling a real need for election officials, who have had to consolidate precincts in many cases and search for spaces — especially in densely populated cities — that also allow for social distancing during the pandemic.

"We're at a place in time where, the smaller facilities? They no longer work," said Alice Miller, the executive director of the D.C. Board of Elections.

Miller watched last week as dozens of her staff turned the concessions area of D.C.'s basketball and hockey arena into a "super" vote center, where any District resident, no matter their precinct or ward, could cast a ballot.

The check-in tables are outfitted with plexiglass and workers measured the distance between voting booths with tape measures. 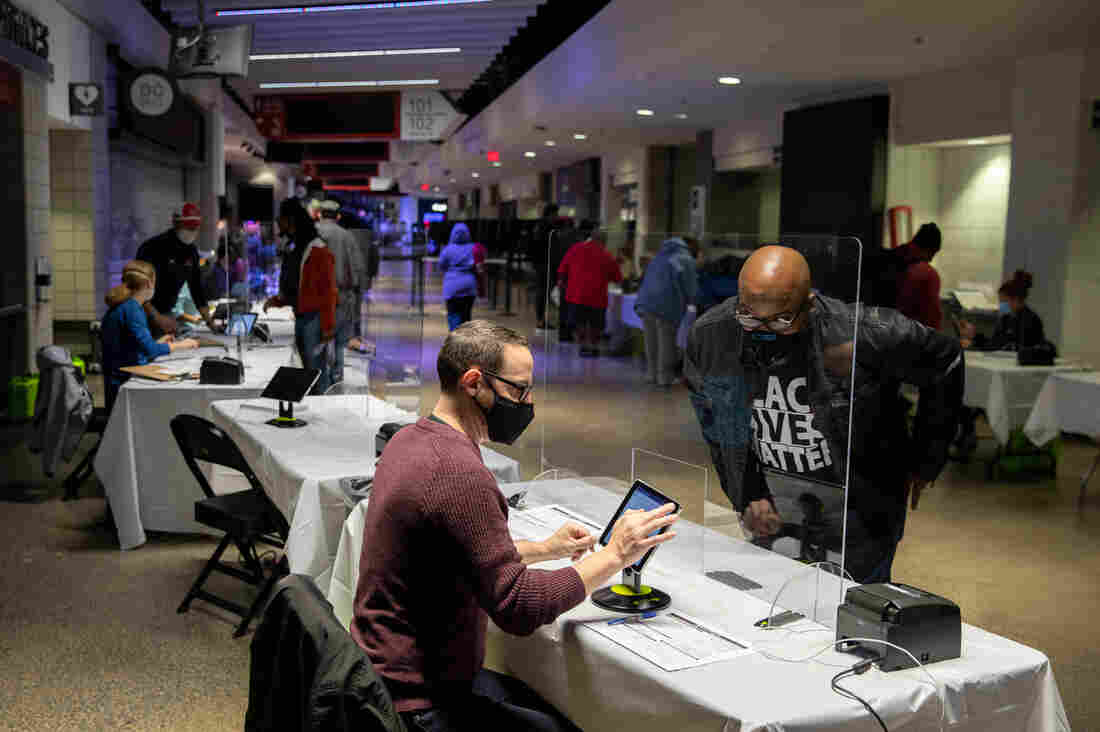 Brian Diem (left) checks in a voter on the first day of early voting at Capital One Arena in Washington, D.C., on Tuesday. Amanda Andrade-Rhoades for NPR hide caption

"We're going to have 20 check-in clerks; we normally would have three or four," Miller said. "Six ballot-on-demand machines, which print the ballots out; we normally have two."

But one of the toughest aspects of planning an election in the COVID-19 era is that even after all this prep, there's still guesswork involved.

Will the new arrangements be enough?

As of Friday morning, more than 2,000 people had voted early at the arena and the average wait time was less than five minutes. But a week before, officials were flying blind when it came to predicting in-person turnout through Election Day.

The District mailed every registered voter a ballot this year, but officials still are unsure about how many people actually will end up using them and who might end up wanting, or needing, to vote in person.

"I have no idea," said Miller, when asked how many people she thought would vote at the arena. "I wish I did have a crystal ball and could predict that." 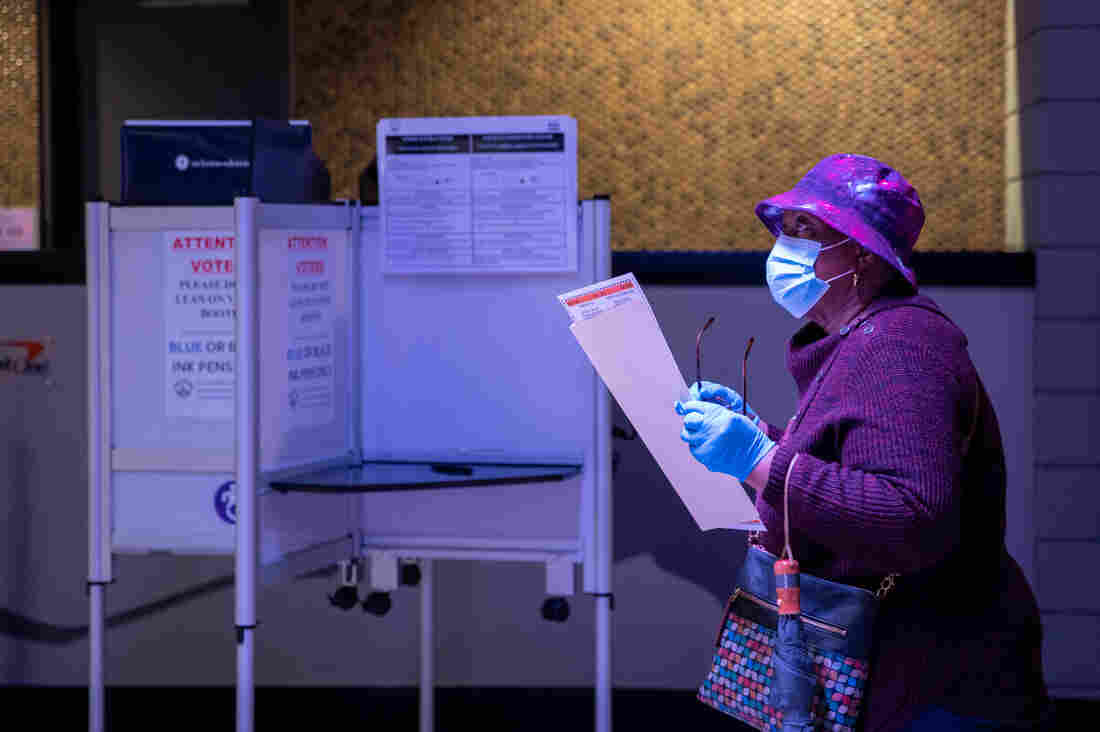 A woman stands in line with her ballot in order to have it scanned and counted on the first day of early voting at Capital One Arena on Tuesday. Amanda Andrade-Rhoades for NPR hide caption

Even in a non-pandemic year, big sports arenas could offer centrally located massive spaces for voters. They also make poll worker recruitment easier, as arena staff were able to volunteer to work, and, in the case of Washington, D.C., Capital One Arena is located above a number of regional rail transit lines.

But in a non-pandemic year, there would also be scheduling conflicts with the multiple sports teams that use the arenas and the big-name concerts they host.

Still: once voters experience a new voting option, it's hard to take it back completely, says Arlin Budoo, the facility operations manager for the D.C. Board of Elections. He watched, as staffers sanitized voting booths.

"The more you give people, the more they expect," Budoo said, with a laugh. "So with us doing this for 2020; they may expect it. But that's above my pay grade."