Accessibility links
7.0 Magnitude Quake Strikes In Aegean Sea; At Least 14 Dead In Turkey And Greece The earthquake's worst effects are reported in Turkey, where officials say at least 12 people died and more than 600 were injured. The city of Izmir suffered extensive damage. 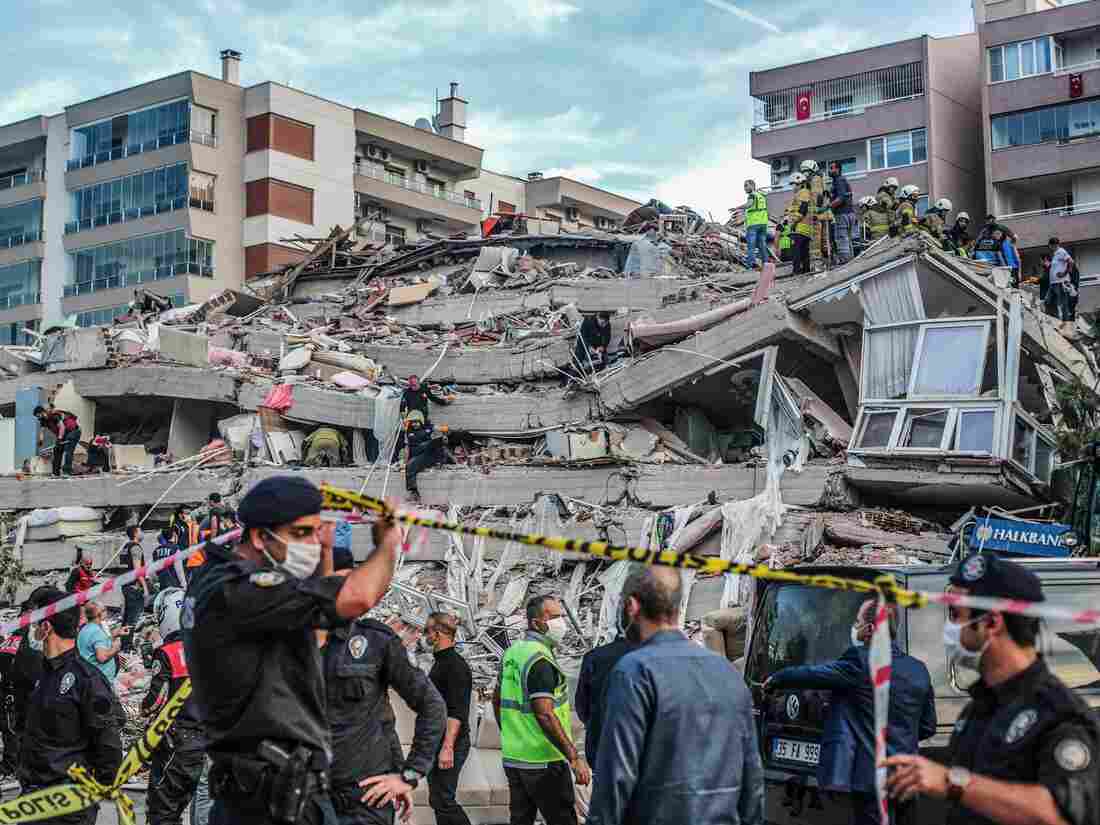 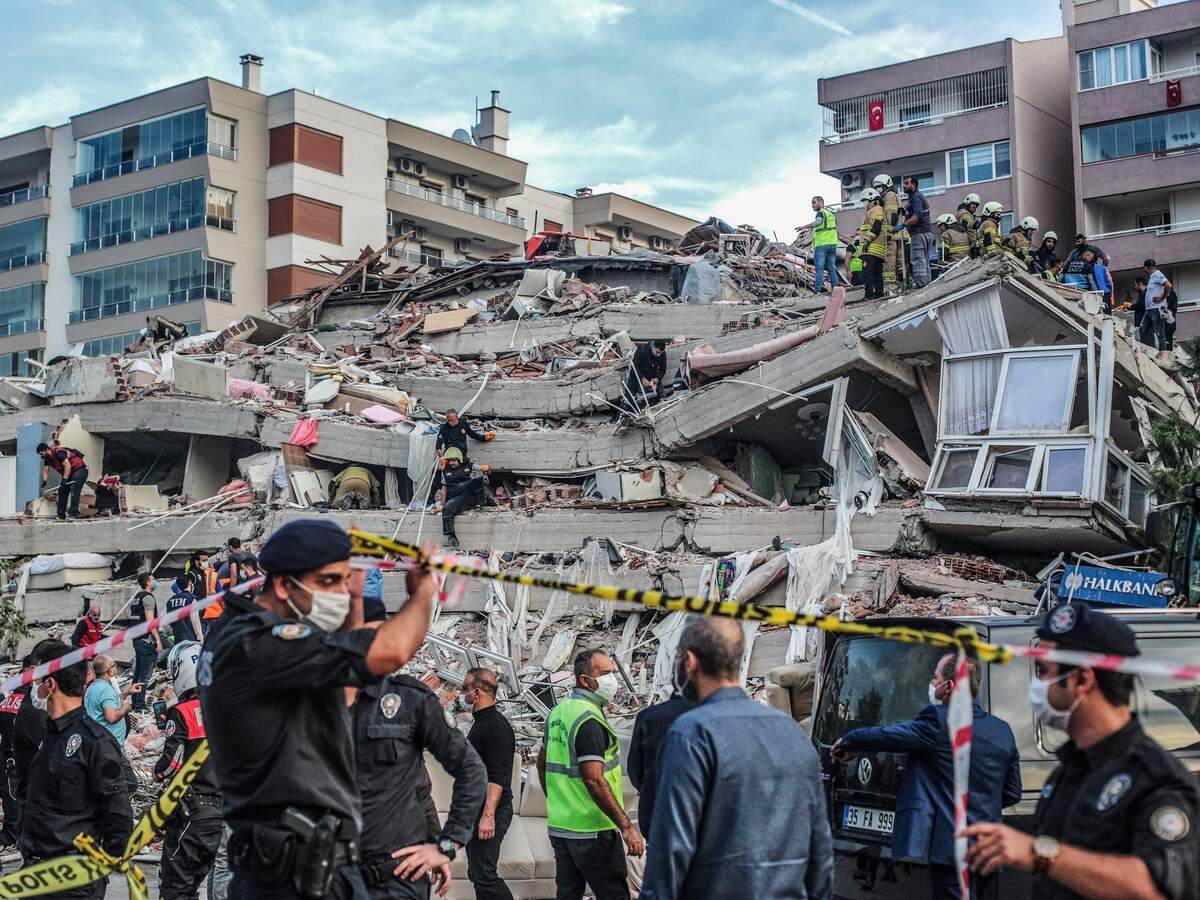 Rescuers search for survivors Friday in a collapsed building in Izmir, Turkey, after a powerful earthquake struck Turkey's western coast and parts of Greece.

At least 14 people died Friday in Turkey and Greece after a powerful earthquake struck off the shore of a Greek island in the eastern Aegean Sea. Emergency crews are working to find victims and survivors of the earthquake, which registered a magnitude 7.0, according to the U.S. Geological Survey. More than 100 aftershocks have been felt, Turkish officials said.

The earthquake's worst effects are being reported in western Turkey, where officials said 12 people are dead and more than 600 are injured. At least 17 buildings were destroyed or damaged in Izmir — one of Turkey's largest cities, which was known in antiquity as Smyrna.

One person died by drowning, according to Turkey's Disaster and Emergency Management Authority. The agency said search and rescue crews are still trying to reach anyone who might be trapped or injured.

Greek Prime Minister Kyriakos Mitsotakis said he called Turkish President Recep Tayyip Erdogan "to offer my condolences for the tragic loss of life from the earthquake that struck both our countries."

The Greek leader added, "Whatever our differences, these are times when our people need to stand together."

The strong quake struck north of Néon Karlovásion, a small town on the Greek island of Samos. At least eight people were injured there, according to Greek state-run broadcaster ERT. But it also reported that two high school students, a boy and a girl, died in the city of Samos after a wall lining a narrow street collapsed on them.

The earthquake crumbled old buildings on the island; it also triggered a wall of seawater that flooded stores and swept cars away, ERT reported. 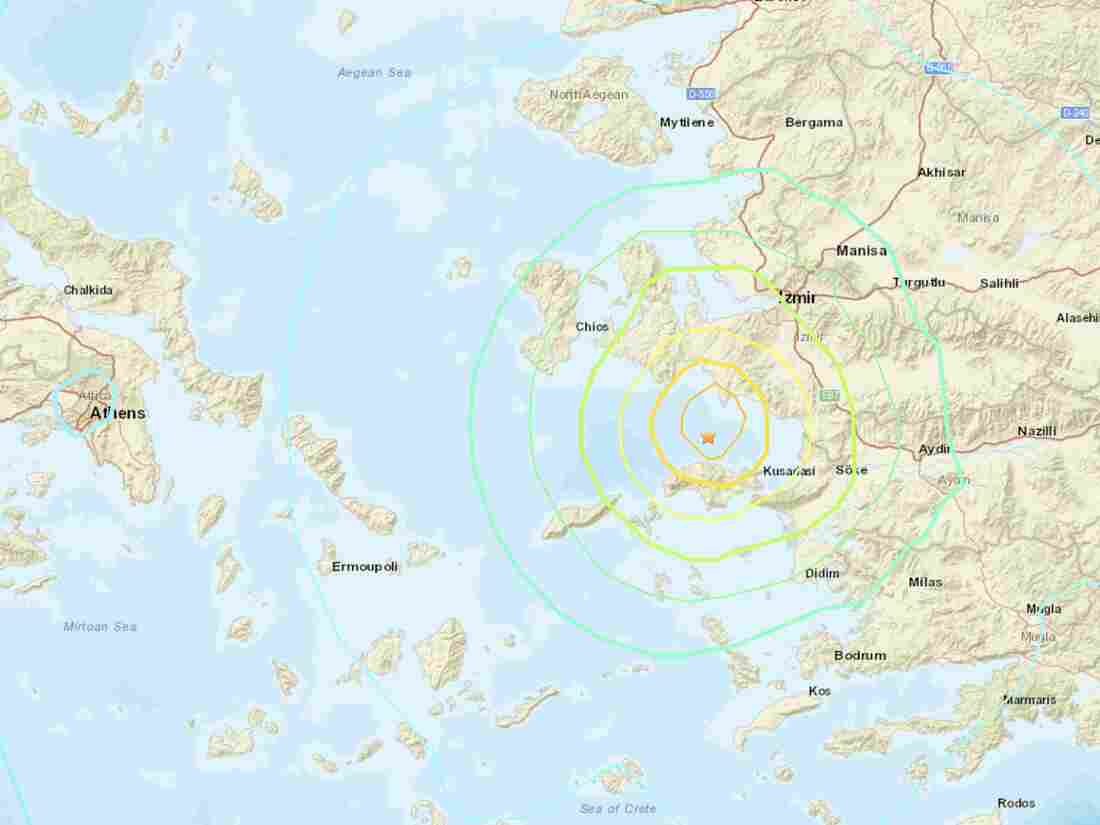 A strong earthquake shook parts of Turkey and Greece on Friday after striking north of the Greek island of Samos. USGS/Screenshot by NPR hide caption 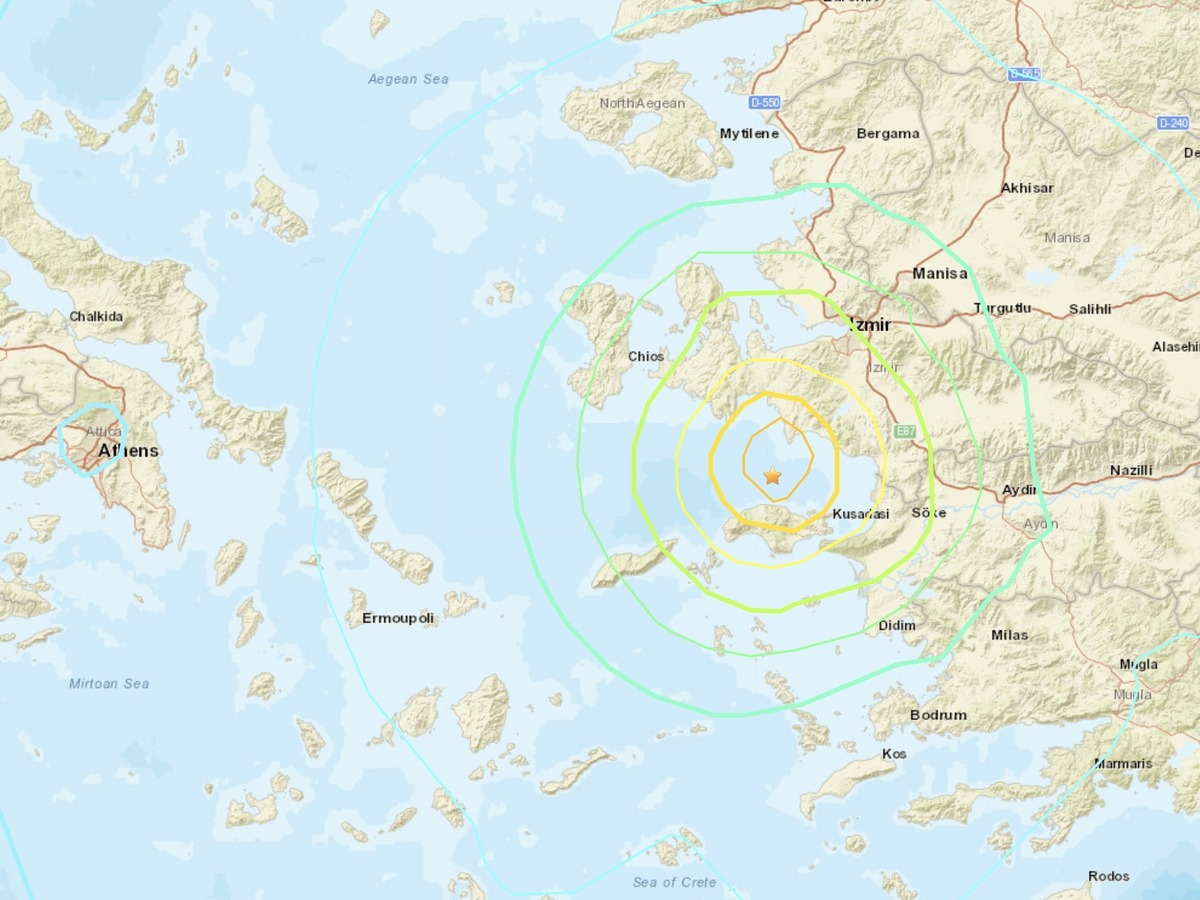 A strong earthquake shook parts of Turkey and Greece on Friday after striking north of the Greek island of Samos.

The quake shook a broad section of western Turkey – particularly Izmir, where hundreds of thousands of people live some 40 miles from the quake's epicenter. Turkey said its military is rushing relief supplies and personnel to the area.

Friday's earthquake is an "intraplate event," the USGS said, resulting from the Africa plate grinding along the Eurasia tectonic plate. The earthquake, which hit roughly 155 miles north of the main boundary between those plates, is largely consistent with earlier temblors in the region, the agency said.

"While commonly plotted as points on maps, earthquakes of this size are more appropriately described as slip over a larger fault area," the USGS said. It added that a 7.0 magnitude quake would normally have a fault area of 50 by 20 kilometers — about 31 by 12 miles.

Each year, the Africa plate moves northward around 10 millimeters (around 4/10 of an inch), the agency said.

This is a developing story. Some things that get reported by the media will later turn out to be wrong. We will focus on reports from government officials and other authorities, credible news outlets and reporters who are at the scene. We will update as the situation develops.