Accessibility links
Mom Dragged From SUV, Beaten By Officers With Toddler In Back Seat Filing Suit Lawyers for Rickia Young, 28, and her son said she was battered, separated from the child for hours, and kept in handcuffs while being treated at a hospital. No charges have been filed against her. 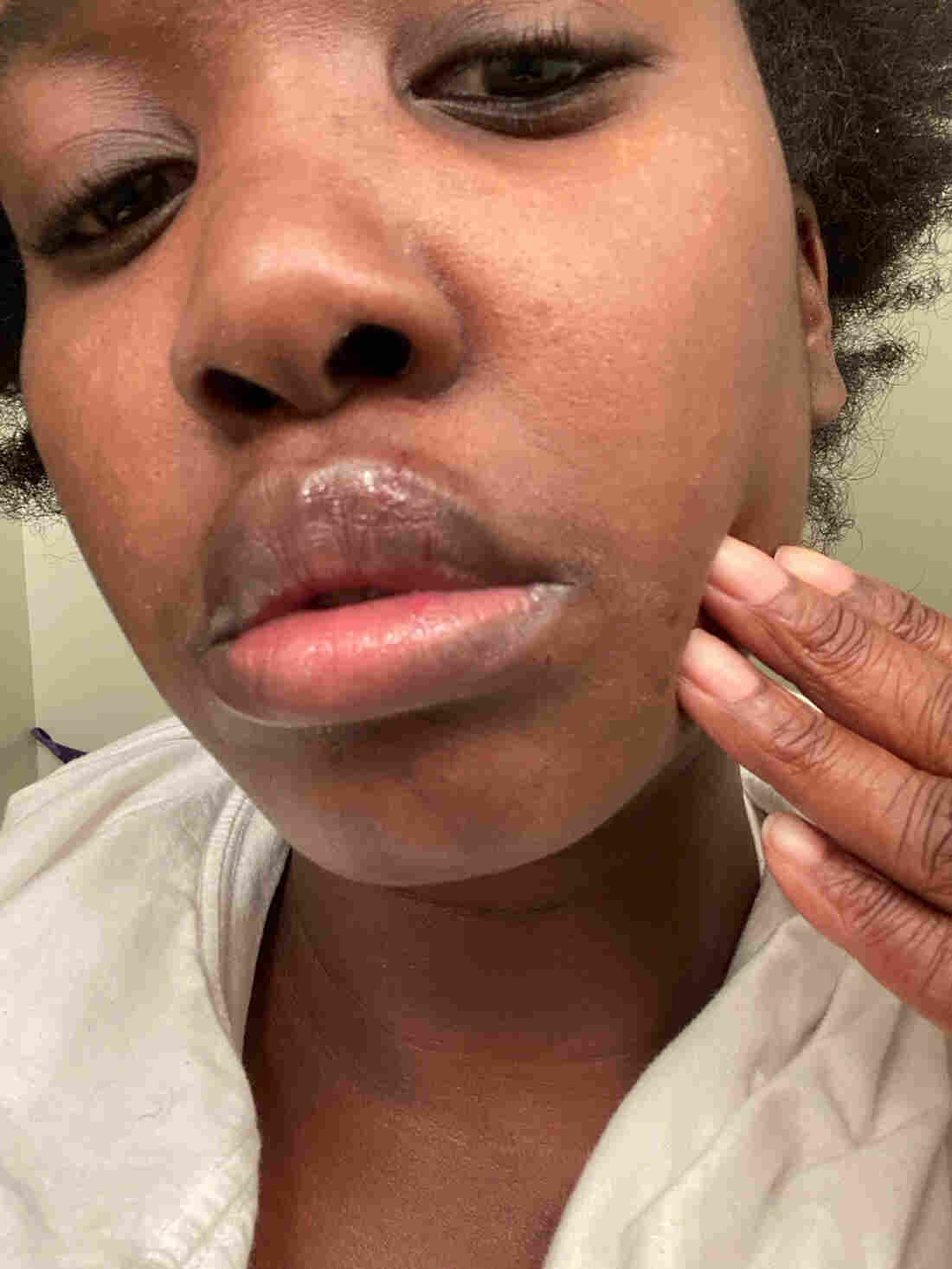 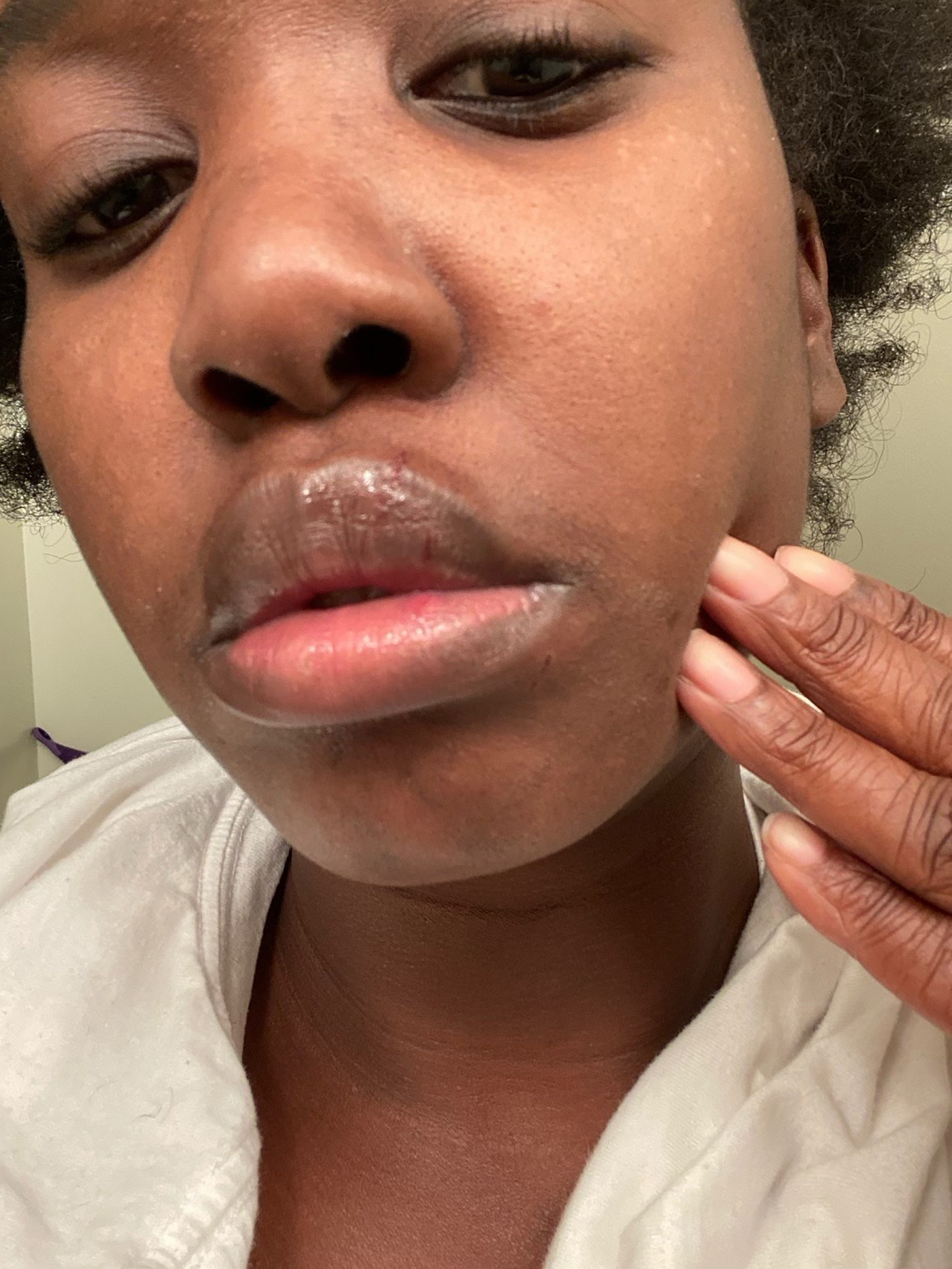 This undated selfie photo provided by Rickia Young shows her lip. Attorney Kevin Mincey, who represents Young, says she went to retrieve her 16-year-old nephew from the area were a protest was occurring, and put her 2-year-old son in the car to help him fall asleep.

As some protesters smashed storefront windows to make off with merchandise during the chaos of Monday night's Walter Wallace Jr. protests, some Philadelphia Police officers smashed an SUV's windows and violently yanked out its driver and a teenaged passenger, threw them to the ground, then pulled a small child from the back seat.

The incident was captured on video and streamed live by Aapril Rice, who watched the "surreal" scene from a rooftop across the street.

In it, she narrates as more than a dozen police officers swarm the dark SUV, which appeared to be trying to slowly make its way out of the melee. Officers shouted for the driver to get out of the car before at least two, bashed in several of its windows with their batons.

With the windows destroyed, officers apparently forcibly removed Rickia Young, who was driving at the time, and her 16-year-old nephew. The two are surrounded by officers who appear to wail on the two bodies on the ground. Moments later another officer grabs the child out of the backseat and carries him away.

On Thursday, lawyers representing Young and her 2-year-old son, who is hearing impaired, said she was beaten by the officers, separated from the child for hours, and kept in handcuffs while being treated for injuries at a hospital.

The Philadelphia Inquirer reports Mincey said Young "had a bloody nose, a swollen trachea, blood in her urine, and swelling and pain on her left side," while the child was treated at Children's Hospital of Philadelphia for "a large welt on his head."

Police Commissioner Danielle Outlaw said the incident is under investigation by Philadelphia Police Internal Affairs. In a video interview on Friday, Outlaw said one of the officers — "the one that we see using the strikes against the car" — has been put on restricted duty pending the outcome of the investigation.

She did not name the officer.

In an interview with the Inquirer, Young's attorneys explained that she had set out for that part of West Philadelphia in an effort to get her son to fall asleep in the car. She decided to drive to pick up her 16-year-old nephew who lives in that neighborhood, but on her way home ran into the police barricade. Young tried to make a three-point turn to head in the opposite direction but that's when police officers attacked the vehicle, Mincey said.

He said that when Young asked where the police were taking her child, they refused to tell her, saying, "he's gonna go to a better place, we're gonna report it to [the Department of Human Services.]"

Meanwhile, her son was taken about 4 miles away from the scene where his grandmother, found him "sitting in his car seat in a police cruiser with two officers," the Inquirer reported. Mincey said the child's car seat was still covered in shattered glass from the SUV's broken windows and he had a lump on his head.

In a strange twist, photos of the barefoot child in the arms of an officer have become another point of tension.

1/ This post by @GLFOP is a lie. My firm @MinceyFitzRoss represents this boy and his mother. This photo was taken moments after police attacked their vehicle, busted out the windows, ripped the mother from her car and assaulted her. pic.twitter.com/6dmDfoBe2B

The National Fraternal Order of Police on Thursday posted a close up image of the officer on social media with a caption that read: "This child was lost during the violent riots in Philadelphia, wandering around barefoot in an area that was experiencing complete lawlessness. The only thing this Philadelphia police officer cared about in that moment was protecting this child."

When contacted by reporters asking questions about the post and the false claim alongside it, the FOP removed the image. Later, a spokesperson told the Inquirer the organization "subsequently learned of conflicting accounts of the circumstances under which the child came to be assisted by the officer and immediately took the photo and caption down."

But Riley Ross, a partner at the firm representing Young, called the move racist propaganda.

"This photo was taken moments after police attacked their vehicle, busted out the windows, ripped the mother from her car and assaulted her."

He added: "Our firm will not stand for this blatant attempt to use our clients to peddle propaganda by using racism and fear to force compliance."