Accessibility links
Sean Connery, The Original James Bond, Dies At 90 The Oscar-winning film star with the distinctive Scottish brogue eventually outgrew the 007 role to appear in a range of movies in a career that spanned nearly a half-century. 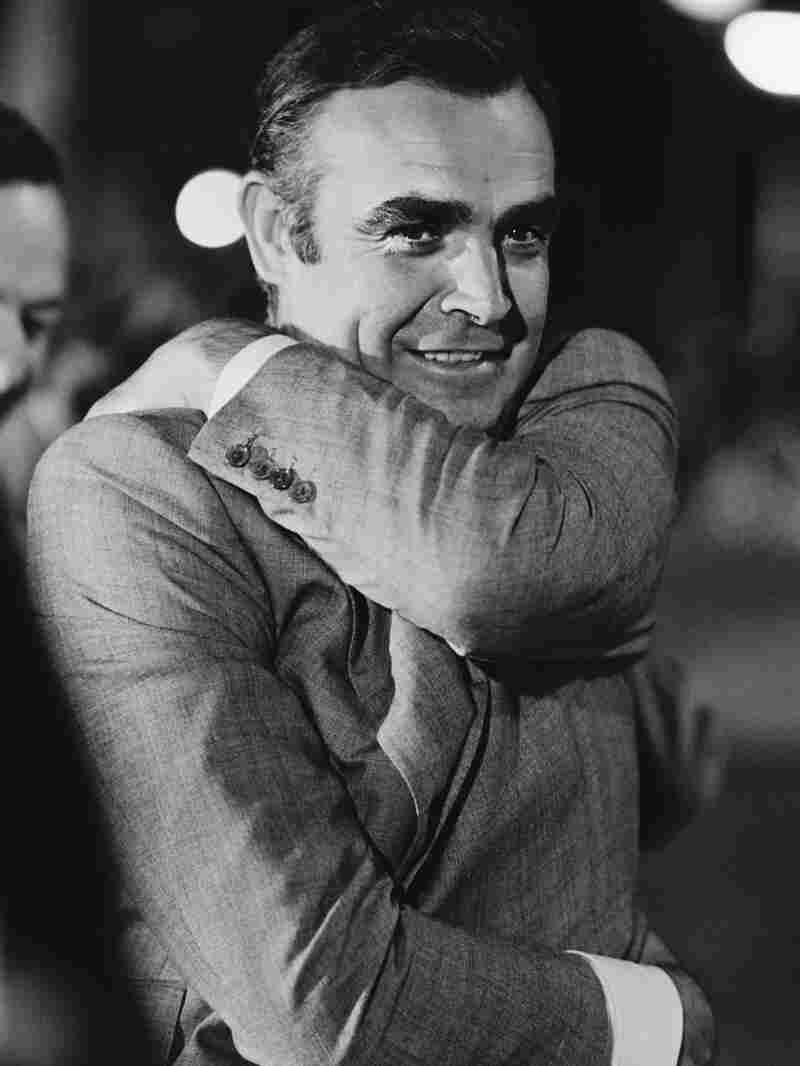 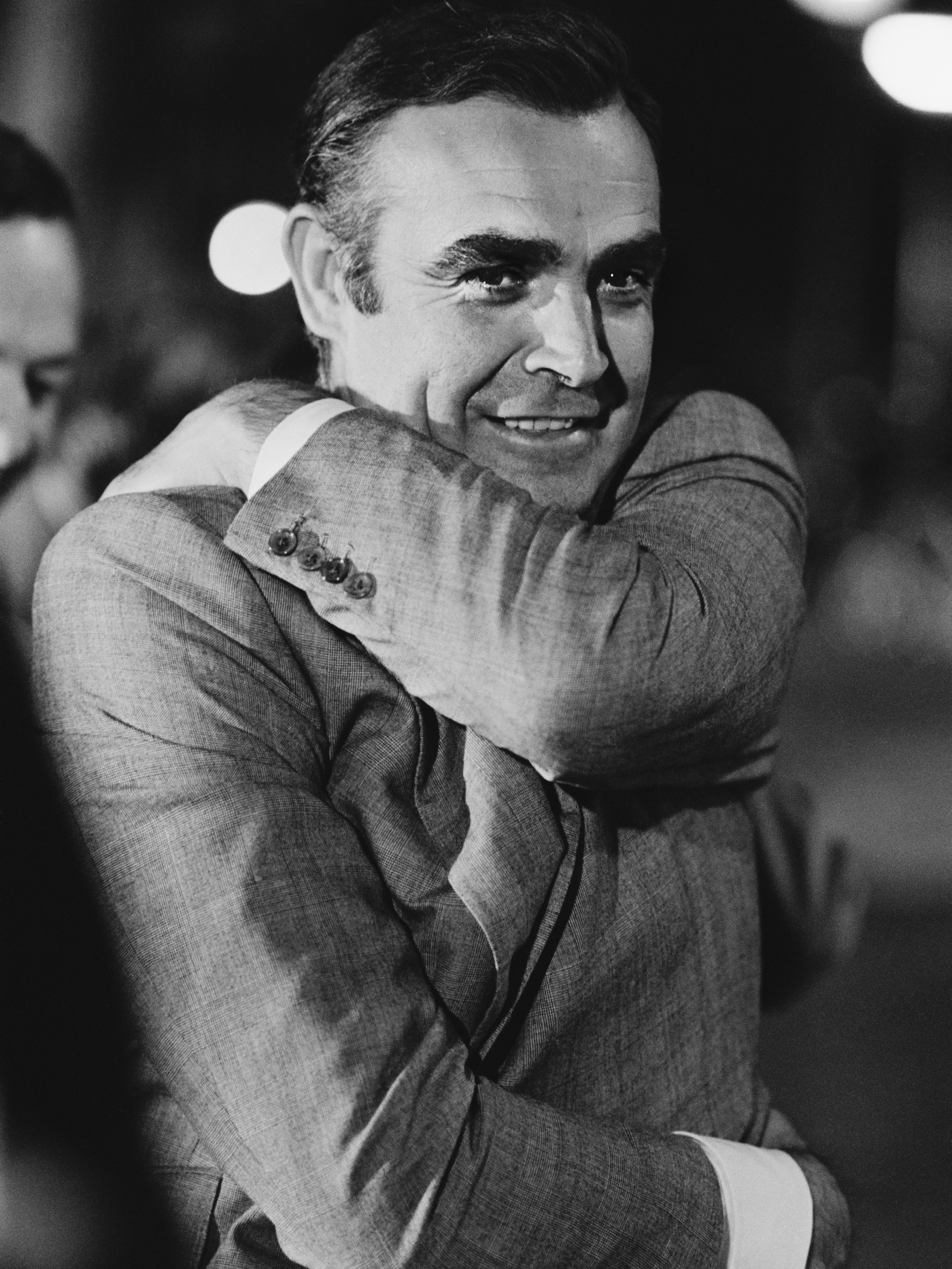 Sean Connery, pictured in Amsterdam during the 1971 filming of Diamonds Are Forever, played James Bond in seven movies.

Sean Connery, the first actor to portray James Bond and later one of the biggest and wealthiest stars in the history of film, has died at age 90.

Eon Productions, the film studio behind the James Bond films, confirmed the death in a statement on its website.

"We are devastated by the news of the passing of Sean Connery," read the statement from producers Michael G. Wilson and Barbara Broccoli. "He was and shall always be remembered as the original James Bond whose indelible entrance into cinema history began when he announced those unforgettable words — 'The name's Bond... James Bond' — he revolutionised the world with his gritty and witty portrayal of the sexy and charismatic secret agent. He is undoubtedly largely responsible for the success of the film series and we shall be forever grateful to him."

On screen, Connery brimmed with innate sexuality, topped off by a cool, insolent sense of menace. A Scotsman who could rock a kilt, he possessed cliffhanger eyebrows over piercing eyes.

As a struggling actor in 1962, he managed to change pop culture forever in the first scene of his first lead role, when he introduced himself in Dr. No: "Bond. James Bond."

Connery's trajectory, as Bond and otherwise, took off like a bullet from a Walther PPK. For many, his performance in the Bond role has never been bettered.

It was far from his origins. Born in 1930 to a cleaning woman and truck driver in depressed Edinburgh, he dropped out of school at age 13. He joined the Royal Navy. After he got out, he competed in the Mr. Universe bodybuilding competition.

In the 1980s, he told ABC's Barbara Walters that his life changed with a trip to London.

"What happened was: When I went to London for the Mr. Universe, one of the guys, he was in South Pacific and he said, 'Do you want to do a show?'" Connery said. "I said, 'Well, I'll have a go at that,' so I went along and auditioned."

He got the part and toured England with the show. By day, he went to local libraries. He studied Shakespeare, Ibsen, Brecht.

In spite of these efforts at refinement, Connery was not the first choice of Bond's creator. Author Ian Fleming wanted the suave British actor James Mason. But after the premiere for Dr. No, Fleming was so impressed he wrote Bond as half-Scottish in future books.

Connery made six Bond films in 10 years. But he felt constrained by Bond as time went on, and he pushed back by taking other roles.

The characters got older as he did. He won an Oscar for playing an Irish cop, Malone, in 1987's The Untouchables. In 1989, he played Indiana Jones' father, professor Henry Jones. 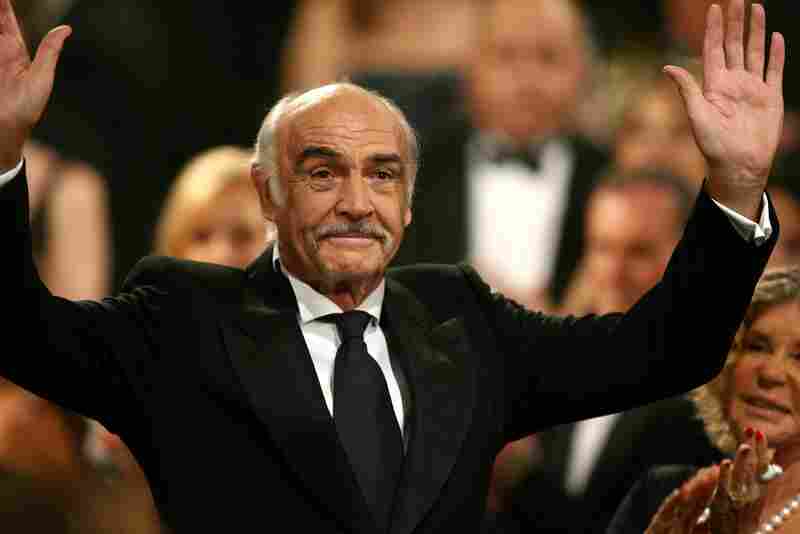 Sean Connery waves to the audience in receiving a lifetime achievement award from AFI in 2006. Kevin Winter/Getty Images for AFI hide caption

He made his final Bond film in 1983, Never Say Never Again (though he did reprise the part to record a voiceover for the From Russia With Love video game in 2005).

On several occasions, Connery mirrored some of the misogyny exhibited by his character in the early Bond films — namely roughing up women. His first wife, Diane Cilento, said he hit her for being drunk. In a 1965 interview with Playboy magazine, he said, "I don't think there is anything particularly wrong about hitting a woman — although I don't recommend doing it in the same way that you'd hit a man. An openhanded slap is justified — if all other alternatives fail and there has been plenty of warning."

He repeated that thought to Barbara Walters in an interview on ABC in 1987. Then, in 2006, he canceled an interview in Scotland over worries he would be asked about his attitudes. Shortly after, the Scottish newspaper The Herald reported that Connery walked back his earlier remarks, saying he had told friends, "I don't believe that any level of abuse of women is ever justified under any circumstances."

Connery was Scottish to the core — he had the word Scotland tattooed on his arm. A member of the Scottish National Party, he ardently supported secession from Great Britain.

In 1999, he addressed hundreds of party activists before a vote. Despite that, the queen of England knighted him the next year.

Sir Sean Connery will be remembered many ways — as an old-fashioned male sex symbol, a financial patron of the arts and a beloved son of Edinburgh — and, of course, for his many roles.

A cult favorite comes in the film version of Rudyard Kipling's The Man Who Would Be King in which Connery stars alongside his real-life friend Michael Caine. When it all goes wrong, they're marched to the edge of a cliff.

As Connery's character prepares to meet his death, he remains defiant to the last moment. Still wearing his crown, he sings.