Accessibility links
How To Talk To Your Kids About The Election Here's a primer from our Life Kit parenting team. 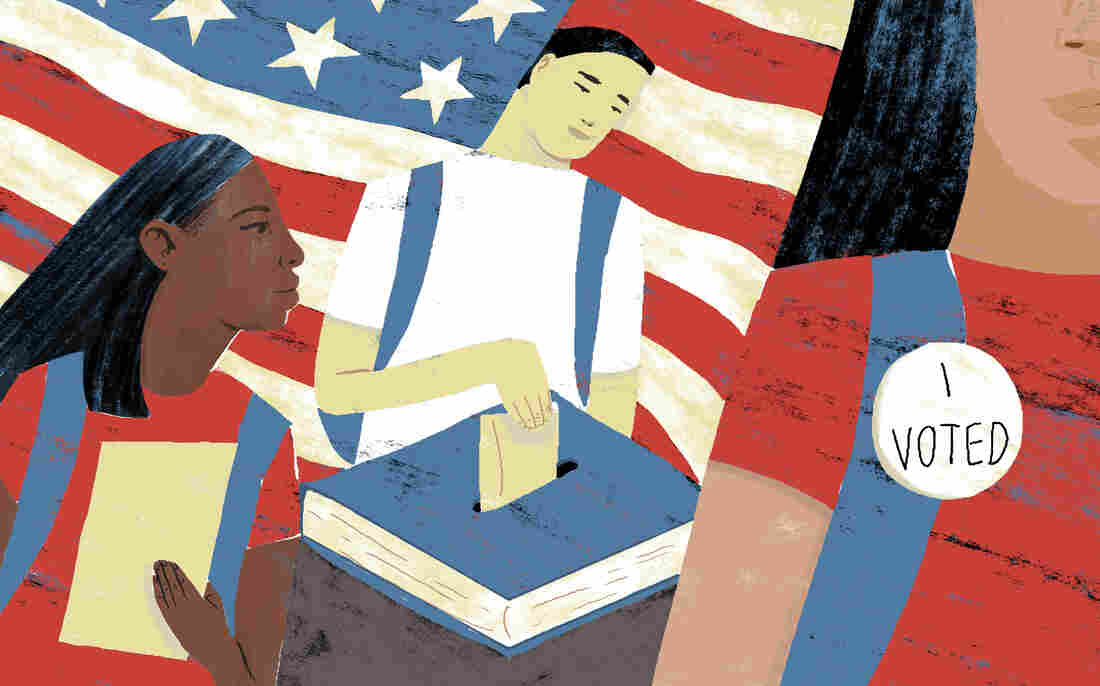 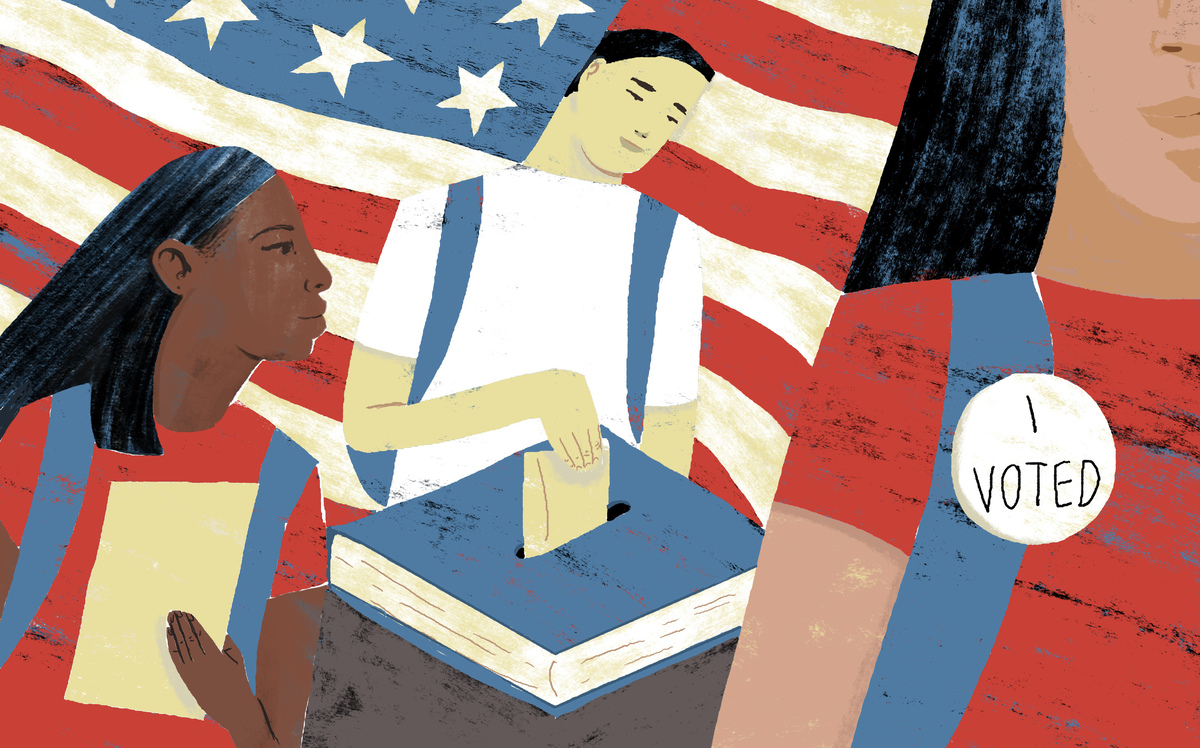 Election Day is nearly upon us. Then again, you probably didn't need us to tell you that. Your sweaty palms suggest you're like many Americans who, no matter which candidate they support, have been amped and anxious for months. If you've been riding an emotional, politics-fueled rollercoaster, believe us: Your kids have noticed.

Here's a quick primer from Life Kit on how to talk with your kids about this election.

Process your own emotions and make home a safe space.

Kids can see that we're on edge. They are naturally self-centered, and they'll assume your stress is about them. Be honest and tell them, "Dad/Mom is a little nervous about the election." It's helpful for kids' social and emotional development to hear you naming your emotions.

At the same time, it's not great for you or them to be mainlining the news 24/7, so try your hardest to turn off the TV or the radio, put away your phone and connect — especially over meals and other key moments during the day.

How To Make A Civics Education Stick

Ask: "What have you heard and how are you feeling?"

Parents and caregivers, this question is a golden line to have in your back pocket at all times — even when there is no election, no protests, no pandemic casting a long shadow over our lives. Tara Conley, a media researcher at Montclair State University, says adults should choose a quiet moment to check in with their kids, maybe at the dinner table or at bedtime.

The idea, she says, is to allow kids to "ask questions about what they're seeing, how they're feeling and what do they think." In other words: Give kids a safe space to reflect and share. And give yourself a chance to dispel any scary rumors or misinformation they may have come across.

And this is key: Your job, first and foremost, is to listen.

Use this as a learning opportunity

Looking for a silver lining to all the recent upheaval? Well, the Annenberg Public Policy Center's annual Constitution Day survey found a marked increase this year in the awareness among average Americans about their rights, like free speech and the structures of government. And, just over half can name the executive, legislative and judicial branches, an all-time high on this survey.

But the next generation can do better! To be active, empowered citizens, kids need to know basic facts about history and geography. "The more you know, the more you can know," says Ashley Berner, a professor at Johns Hopkins who studies how schools teach civics. In fact, she says, research shows students who have more time with social studies actually do better in other subjects, too.

Election time is a perfect opportunity to help kids build up a foundation of knowledge. Take a look at all the state maps online. For slightly older kids, you can talk about the origins of the Electoral College, during the Constitutional Convention in 1787. If they're fans of the musical Hamilton, you can put on "Cabinet Battle #1" for some great context.

Berner also suggests a simple, civically-minded walk outside. "Talk about what institutions are public and what are private. So which things have we decided as a community that we're going to support, like road-building, or parks or libraries?"

As children grow, a strong foundation of background knowledge will help them sort fact from what tries to pass for it on social media.

Our kids are living through history. It's good to have perspective on the highs and lows that came before. (Honestly, it's sort of helpful for grownups too!)

The United States and its democracy are a work-in-progress, and in order for children to understand the role we all have to play in its improvement, they need to learn about its failures as well as its successes. "I think the highest form of patriotism is self-reflection and saying, 'Hey, this is what we've done wrong,'" says Hasan Kwame Jeffries, a history professor at Ohio State University.

Presenting kids with a less-than-honest version of history risks leaving them feeling confused, alienated, even betrayed when they're exposed to facts that don't fit that rosy narrative. This came up when we spoke with 17-year-old Taylor Pittman, an advisor to a program called Cultures of Dignity, which is dedicated to "civil dialogue" among young people, families and educators.

A high-school senior in New Orleans, Pittman told us about the time her class visited a former plantation that depended on labor from enslaved people. She says the tour guide wanted to talk about "The agriculture, and 'It's so pretty. And look at the nature,'" especially the plantation's oak trees.

"And then when we got back onto the bus, my teacher was like, 'The oak trees are where they used to hang people. They used to have beatings there.' And we talked about how everything they said there at that plantation was wrong," Pittman remembers.

Jeffries says, when talking about race and identity with kids, the point is not to focus solely on the hard stuff but to strike a delicate balance, like when he talks with his daughters.

Don't demonize the other side. We need to teach kids the fine art of tolerant disagreement.

It feels like the United States has never been so divided. It can be tempting to stay in our safe bubbles and bash our opponents. But Berner says we need to actively expose our children to a range of opinions.

"It's so important for young people to be engaged in conversations about meaning and purpose and different political viewpoints." In fact, she says, historically, "civic formation is the prime reason why modern democracy started funding education in the first place."

According to this view, classrooms should be like a little lab where students practice having reasonable, evidence-based debate. "In fact, most of our peer nations have made it a priority to explicitly teach children about the ways that different groups in society actually see the world differently," says Berner.

Emotions are running high right now, but Truglio has told us that at all costs, we should resist the temptation to label the other side "bad guys" or "evil." It's not helpful, and it may increase fear and confusion. Instead, talk about people being in pain, being angry, or making choices we disagree with. Empathy, perspective-taking — it's hard to do, but it's also absolutely necessary in a democracy.

Jeffries adds, "We're afraid to talk about politics ... As my 5-year-old says, 'That don't make no sense!' You got to let people know where you stand. Provide children evidence. Provide them with stories."

Don't sit and stew. Invite your kids to join you in the nuts and bolts of civic action — like writing letters, going to (safely masked and distanced) protests, or collecting cans for a food pantry. It's empowering, and it builds a sense of belonging and agency, says Jeffries. "Society is service. You have to serve other people."

The podcast portion of this episode was produced by Sylvie Douglis.