Accessibility links
Many Asian American Candidates Face Racism During Pandemic While the pandemic has made this an unprecedented election for all campaigns, it's a particular challenge for the record number of Asian American and Pacific Islander candidates running this year. 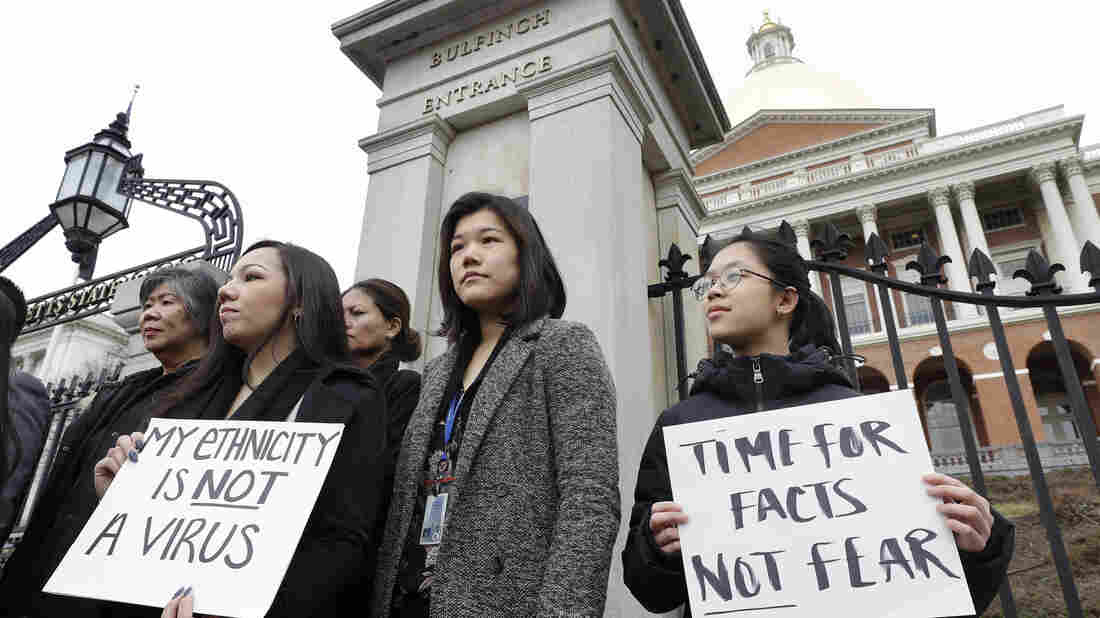 Members of Massachusetts' Asian American Commission protest on March 12 in Boston. Asian American leaders in the state condemned what they say is racism aimed at Asian communities amid the coronavirus pandemic. Steven Senne/AP hide caption 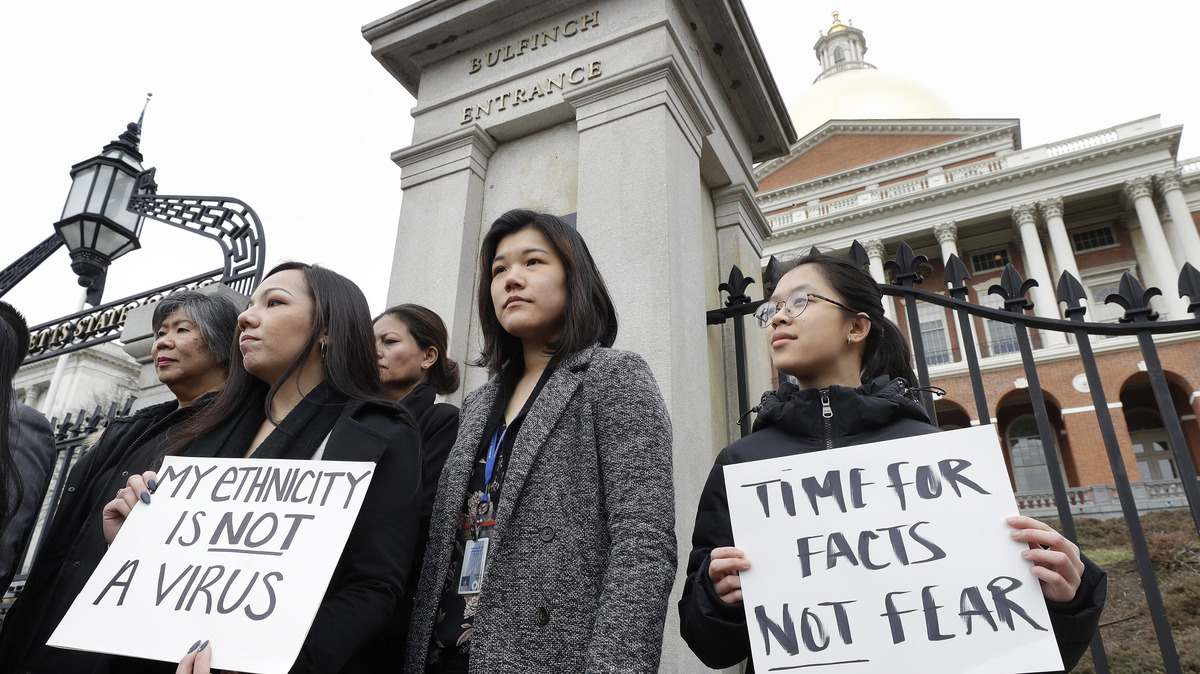 Members of Massachusetts' Asian American Commission protest on March 12 in Boston. Asian American leaders in the state condemned what they say is racism aimed at Asian communities amid the coronavirus pandemic.

In April, Yuh-Line Niou, a member of the New York State Assembly, was passing out KN95 masks in front of a Kosher deli in her district when she was verbally harassed by a stranger who approached her on the street.

"He said something like, 'You're the one who brought the virus here. I hope you die,' " she recalled. "It's horrifying. You're doing what you can to help people and everyone else wants you to die."

Niou, who's Taiwanese American, says that addressing the pandemic's toll on her district has left little time to campaign for reelection. In the spring, she says many Asian American businesses in her district, which spans lower Manhattan and includes Chinatown, were forced to shut down as customers avoided their restaurants and neighborhoods. She says the economic impact was an early consequence of racism that links the coronavirus to Asian American communities.

While the pandemic has made this an unprecedented election for all campaigns, it's brought a particular challenge for the record number of Asian American and Pacific Islander candidates running this year.

According to Madalene Mielke, president of the nonpartisan Asian Pacific American Institute for Congressional Studies, the number of AAPI candidates who ran for federal offices this year doubled to 99, from 48 in the 2018 midterms. And the number running for state legislature seats across the country grew by at least 21.

But these candidates have faced an environment of heightened anti-Asian racism that has surged since the pandemic began.

A group called Stop AAPI Hate, one of a handful of tracking efforts launched this year, received more than 2,500 reports of anti-Asian incidents between March 19 and Aug. 5. And a United Nations document made public in October cited an "alarming level" of racially motivated violence and other incidents against Asian Americans in the U.S.

These racist attacks extend to many Asian American political candidates and leaders, who say that President Trump's rhetoric around the coronavirus has exacerbated the racism they've faced throughout their lives. Trump, who blames China for letting the virus spread, calls it the "China virus" and has also used the term "kung flu."

Online and in person, Niou has faced racist remarks, including being called "kung flu."

"The thing is, I'm the elected, so I'm probably getting the least of it," Niou said. "But there are people who have been punched in the face for wearing a mask. There have been people set on fire. ... I think I'm just hurting for everybody else."

Listeners Share Their Experience Of Facing Racism During The Pandemic

Listeners Share Their Experience Of Facing Racism During The Pandemic

"I'd never heard that type of racism"

For a few weeks this spring, it was hard for David Kim to look at his direct messages on Twitter. Kim, a Democratic congressional candidate in Los Angeles County, has run a largely virtual effort while the pandemic has limited in-person campaigning. But his Twitter inbox had filled with racist messages telling him to "go back to your country" and "eat bats."

"I've gotten so many comments, online at least," Kim said. "I'd never heard that type of racism to my face — not to that extreme."

Kim, who's Korean American, said it's hard to tell whether the messages can be tied to Trump's language. Despite Trump's focus on China, Kim and many other AAPI candidates, not just Chinese Americans, have been affected.

He said he expected to experience some racism as a candidate. "But the whole national sentiment sort of supersized it and blew it up," he said.

"The racist comments and attitudes are happening more to regular people," she said. "If you're running for office, you already have a platform where you can highlight someone who's being racist."

But Mielke added that the pandemic has created other challenges for some candidates of color, who often rely on in-person conversations and door-to-door campaigning to combat biases voters may have against nonwhite faces and names.

This was a hurdle Democrat Albert Lee faced when he ran an unsuccessful primary challenge in an Oregon congressional district that includes Portland. Lee, who's Korean American and Black, said the virtual nature of the campaign made it harder to reach voters, especially while running against an incumbent congressman who has held the seat for nearly 25 years.

The onset of the pandemic was a "death knell" for his campaign, Lee said.

Lee and other AAPI candidates, motivated both by anti-Asian racism and the Black Lives Matter movement, have come together to address attacks on their communities.

Lauren Ashcraft, a Democrat who was defeated in a congressional primary in New York, formed a coalition with Lee and other progressive Asian American candidates who have hosted virtual town halls and shared resources on anti-racist education.

Are You Watching Your State Lawmaker Elections? Here's Why You Should

How it's been for conservative Asian Americans

Navigating Trump's comments has been trickier for conservative Asian Americans like Peggy Huang, who ran and lost in a congressional primary in a district based in Orange County, Calif.

Though Huang said race was "never an issue" for her campaign, she recalls confronting attendees of at least two political events in the spring who used the term "China virus" in a way that left her in "absolute discomfort."

"It all came back to the fact that China's government didn't disclose the virus," Huang remembered. "And I said, 'Well then let's talk about it being a problem. Don't make it into a Chinese American issue.' "

While Huang has often found Trump's language racist, she believes the majority of Republican leaders only use the phrase "China virus" to note the pandemic's origin. She's found some reaction to this language to be "overly sensitive."

Cliff Li, the founder of the National Committee of Asian American Republicans, said he wishes he saw more Republican AAPI candidates speak out against racism spawned by the pandemic.

Both Li and Huang identified Young Kim, who's running in a close congressional race in Southern California, as one Republican Asian American candidate who's openly criticized Trump.

In June, Young Kim condemned "the president's continued use of terms associating COVID-19 with the AAPI community" on Twitter. "No American of any race or ethnic group is responsible for the virus," she wrote.

1/2 The President’s continued use of terms associating COVID-19 with the #AAPI community is hurtful to many across our diverse nation. As I have said in the past, no American of any race or ethnic group, is responsible for this virus.

But Li said Young Kim was one of the only conservative Asian American leaders to speak out, though he added Democratic AAPI candidates and elected officials "far outnumber" Republican ones.

"I understand why they don't say much. Because the Republican Party is the Trump party," Li said. "So [going] against Trump is suicidal."

"Every AAPI is on edge"

In March, for example, Sen. John Cornyn, R-Texas, said China was to blame for the coronavirus because of "the culture where people eat bats and snakes and dogs and things like that." The AAPI Victory Fund, a Democratic political action committee focused on mobilizing Asian American voters, responded with an ad that tied Cornyn's comments to the president.

Rep. Judy Chu, D-Calif., said ASPIRE PAC, the political arm of the Congressional Asian Pacific American Caucus, also ran a Facebook ad campaign calling out some of the 164 Republican lawmakers who in September voted against a House resolution to condemn anti-Asian sentiment related to the pandemic. The ads directly targeted Republicans with large AAPI populations in their districts.

While debating the bill on the House floor, some Republicans, like Rep. Doug Collins, a Georgia Republican who's running for U.S. Senate, argued the legislation was "just for the opportunity to criticize the president."

Chu said CAPAC's efforts to respond to anti-Asian racism — through hearings, press conferences and social media — have monopolized her reelection campaign. She added that the stories and videos she's seen from Asian Americans across the country "send chills down her spine."

"Every AAPI is on edge," Chu said. "But now is the time to use our voices."