Accessibility links
Powerful Typhoon Goni Slams The Philippines, Leaving At Least 10 Dead And 3 Missing The storm, with maximum wind speeds that made it the most powerful of the year, made landfall on the populous island of Luzon on Sunday and is weakening as it heads toward Vietnam. 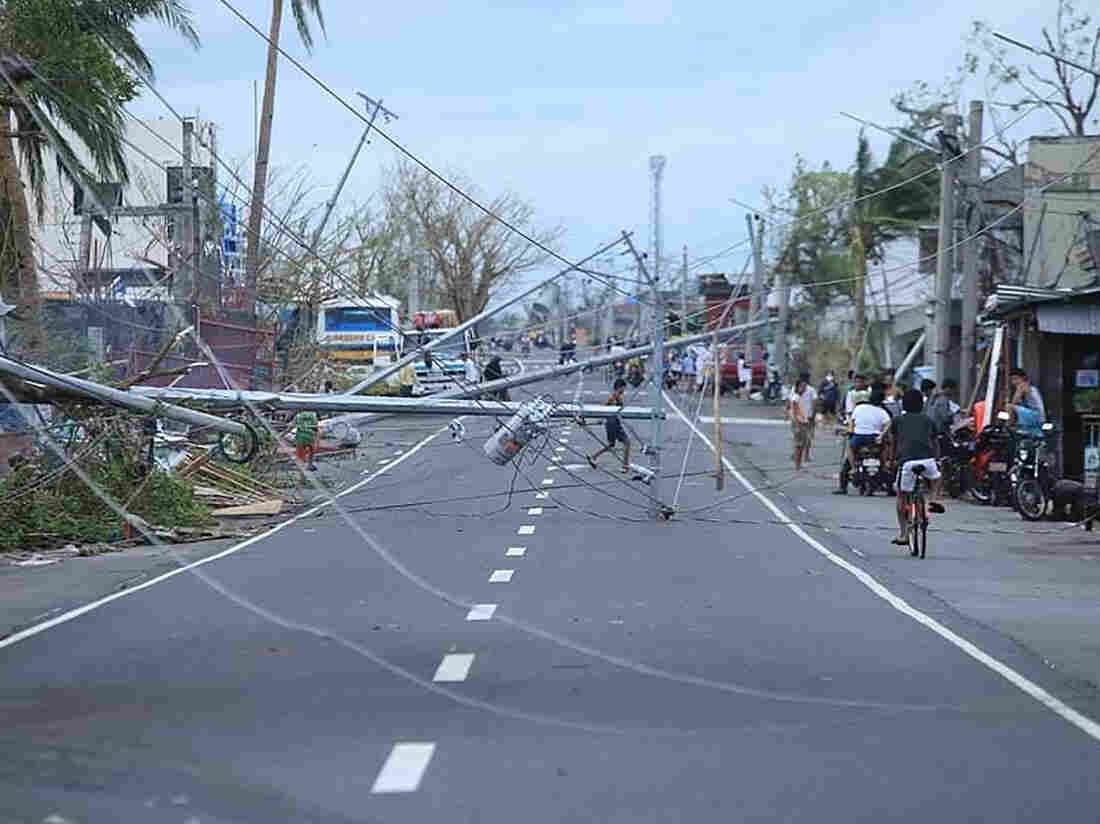 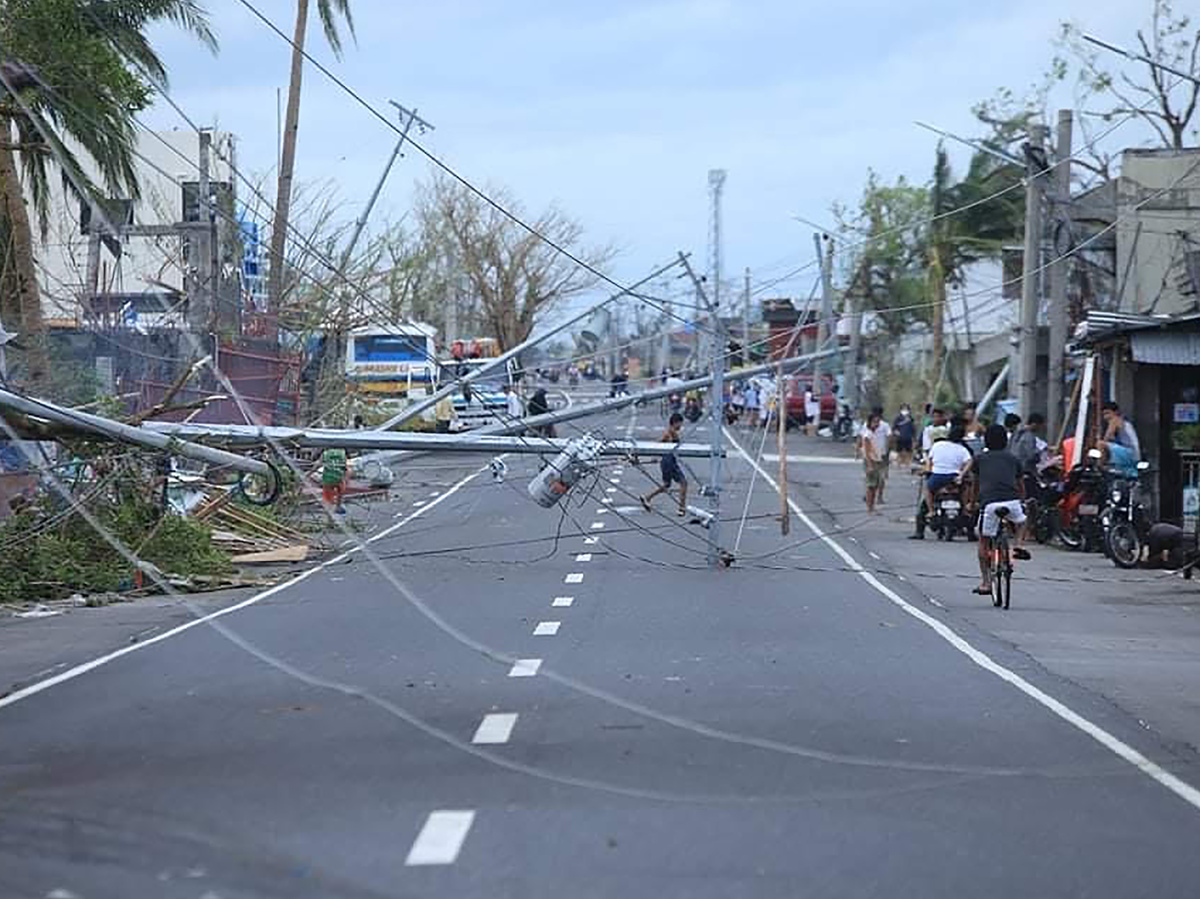 Typhoon Goni downed electric posts in Tabaco, Albay province, in addition to causing deadly flooding and storm surge when it struck the Philippines on Sunday.

The storm, whose maximum wind speeds earned it the distinction of the year's most powerful cyclone, left at least 10 people dead and three missing. Regional authorities said 345,000 people are being housed in evacuation centers, with another 50,000 staying with relatives.

Goni, which is referred to locally as "Rolly," was downgraded to tropical storm status on Sunday evening local time. It is continuing to weaken over the West Philippine Sea, the Philippine Atmospheric, Geophysical and Astronomical Services Administration said.

"#RollyPH" FURTHER WEAKENS OVER THE WEST PHILIPPINE SEA OFF THE COAST OF BATAAN. pic.twitter.com/vqpSMe7Hs6

It is likely to remain a tropical storm, the agency said, but could weaken into a tropical depression because of "increasingly unfavorable conditions."

Goni came days after Typhoon Molave had already killed 22 people in the Philippines.

Ahead of the storm, the international airport in Manila closed for 24 hours starting on Sunday. And nearly one million residents were preemptively evacuated, a process further complicated by the coronavirus pandemic — Johns Hopkins University puts the number of confirmed cases in the hard-hit Philippines at more than 383,000.

The storm intensified rapidly on Friday, adding 80 miles per hour to its maximum sustained winds in just 24 hours. Peak winds were estimated at 195 mph prior to landfall, which is equivalent to a Category 5 hurricane.

Meteorologists said that makes Goni one of the intense cyclones in history, and comparable in strength to Super Typhoon Haiyan, which killed more than 6,000 people when it battered the Philippines in 2013.

Super Typhoon #Goni is now making landfall on the Catanduanes Island with a pressure of 884mb and wind speeds of 195mph. This is one of the most powerful and strongest storms of all time in the Northern Hemisphere and tied for the entire globe with Winston (2016). pic.twitter.com/2pTOYW174b

The eastern island province of Catanduanes first took the full front of Goni early Sunday, with sustained winds of 140 miles per hour and gusts of 174 miles per hour, The Associated Press reported. Communication, water and electricity are out.

WATCH: A storm surge off the northern coast of the Albay Gulf due to strong wind and intense rainfall from Super Typhoon Rolly (international name: Goni)

Citing local officials, Reuters reported that the 10 recorded fatalities and three people reported missing were all in the region of Bicol, which encompasses the southern part of Luzon. Nine of those deaths were in the province of Albay.

The AP reports that in one Albay community, the typhoon triggered volcanic mudflows that "engulfed" about 150 houses.

Two of the deaths there were of a father and son trapped by the mudflow, and Albay Gov. Al Francis Bichara told local radio station DZMM that the boy was swept away and found 9 miles over in the next town.

Another villager in Albay was killed after being pinned by a fallen tree, the AP said.

In the Guinobatan municipality of Albay, Rep. Zaldy Co of the Ako Bicol party list tweeted that an estimated 300 houses were buried under rubble, with "several people believed to be buried alive."

LOOK: Around 300 houses were buried under armored rocks from Mayon Volcano in Purok 6 and 7, San Francisco, Guinobatan, Albay. According to the Facebook post, several people believed to have been buried alive by the flow. #RollyPH 📸 AKO BICOL Rep. Zaldy Co Facebook Account pic.twitter.com/eIuSkZoqTN

The Philippine Red Cross confirmed casualties in Albay after a broken dike caused a river to overflow, and said it was coordinating with authorities to retrieve bodies.

Richard Gordon, a senator and the chairman of the Philippine Red Cross, said that 110 individuals in the city of Batangas were rescued after being stranded by high floodwaters.

He also provided updates about the extent of the damage in Catanduanes, where he said some 6,113 individuals were in 14 evacuation centers and 222 partially damaged houses had been recorded in the municipality of Pandan.

Mark Timbal, spokesperson for the Philippine's National Disaster Risk Reduction and Management Council, told the BBC on Sunday that 19 million people may have been affected by Goni's path, including populations in "danger zones for landslides, flooding, storm surges and even a lava flow."

Our #RedCross Batangas team was able to pull 110 individuals out of harm's way. Typhoon #RollyPH debris caused the Magnus River to overflow which resulted to flooding.#PRCLifelineOfThePeople https://t.co/9dwP5HiZfX

Government officials held a press conference on Sunday to share updates on the storm and their response.

And as the Inquirer, an English-language newspaper, reported, #NasaanAngPangulo, or "Where is the president?" trended on Twitter after President Rodrigo Duterte was noticeably absent. A presidential spokesperson said Duterte was staying in his hometown of Davao and is scheduled to return to the capital Manila by Tuesday.

The storm is predicted to weaken further over the South China Sea in the coming days, and potentially bring flooding rainfall to Vietnam.

Goni was the 18th tropical cyclone to hit the country this year, which faces an average of 20 typhoons annually. And number 19 could come later this week: Tropical Storm Atsan, officials said, entered the Philippine Area of Responsibility early Sunday.