Accessibility links
FACT CHECK: Trump Falsely Claims That Votes Shouldn't Be Counted After Election Day "I think it's terrible when we can't know the results of an election the night of the election in a modern-day age of computers," Trump said. But the vote totals are never fully counted the same day. 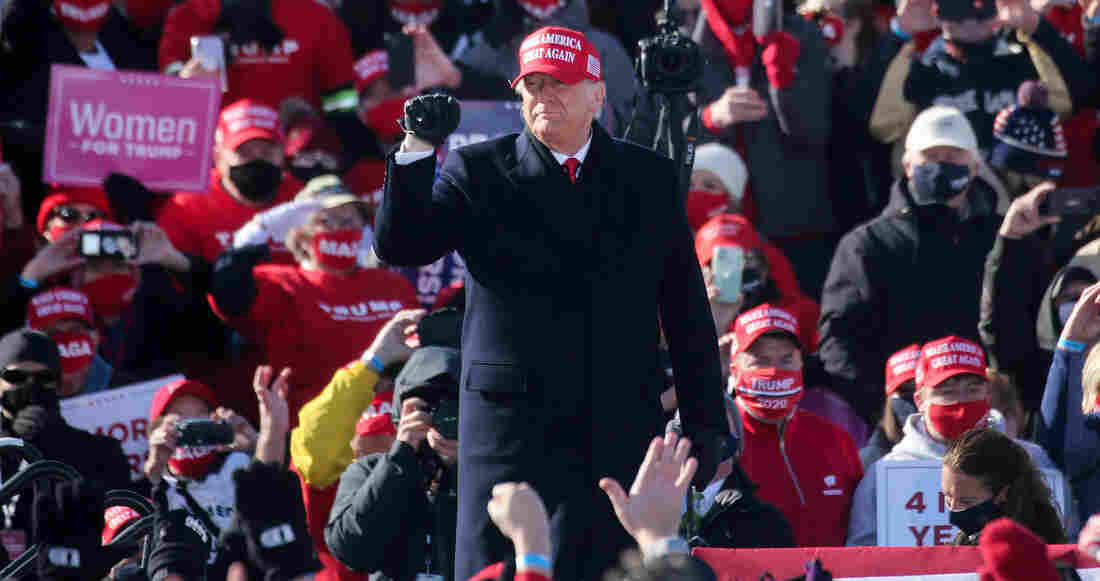 President Trump arrives Sunday for a campaign rally in Dubuque, Iowa. He told supporters that the results of the presidential race should be known on election night. Mario Tama/Getty Images hide caption 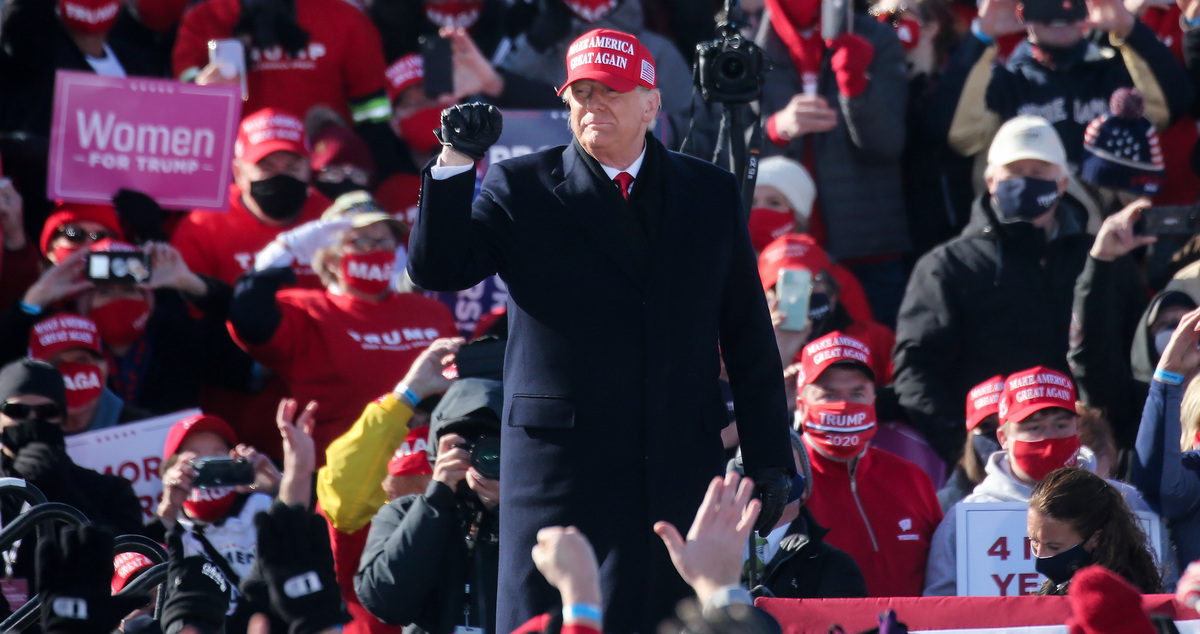 President Trump arrives Sunday for a campaign rally in Dubuque, Iowa. He told supporters that the results of the presidential race should be known on election night.

President Trump is doubling down on claims that the results of the presidential election must be known on election night, falsely asserting "that's the way it's been and that's the way it should be."

Speaking to reporters after arriving in North Carolina on Sunday evening during a campaign swing, Trump repeatedly called a recent Supreme Court decision on absentee ballots "terrible." The decision allows election officials in Pennsylvania to count absentee ballots received as late as Friday as long as they are postmarked by Nov. 3.

The president denied that he would try to declare victory prematurely.

But then he still raised doubts about counting votes beyond Election Day, even though in any election, it typically takes longer to count absentee ballots that by law count just the same as votes cast in person. More of those ballots are being cast this year because of the pandemic.

"I think it's a terrible thing when people or states are allowed to tabulate ballots for a long period of time after the election is over," Trump said. "I think it's terrible when we can't know the results of an election the night of the election in a modern-day age of computers."

Trump has repeatedly made unfounded claims about the integrity of absentee voting and even told supporters on Sunday to "be careful" with mail-in ballots.

It isn't the first time Trump has said the winner of the contest should be known on Nov. 3. Earlier Sunday, during a campaign stop in Dubuque, Iowa, Trump bemoaned the idea of having to wait for results.

"We should know the result of the election on Nov. 3, the evening of Nov. 3. That's the way it's been and that's the way it should be," he said to cheers, repeating a sentiment he tweeted out on Friday.

Trump campaign senior adviser Jason Miller reiterated the argument Sunday on ABC's This Week, adding an unfounded accusation that Democrats would do something nefarious.

"If you speak with many smart Democrats, they believe President Trump will be ahead on election night, probably getting 280 [electoral votes], somewhere in that range, and then they're going to try to steal it back after the election," Miller said.

But that's not the way voting in America works.

For starters, no state ever reports its final results on election night.

Typically, news outlets are able to declare winners the night of the election using partial counts and exit polls, which allow them to see how much of the vote is going to which candidate and calculate whether a candidate still has a path forward to win.

Each state has its own laws for when it needs to certify the election results, and none falls on Election Day.

Delaware is the only state that will certify its results within the same week as Election Day. Most states will certify their results in the last two weeks of November, with some states even extending until the second week of December.

Additionally, polls don't even close in California, Oregon, Idaho and Washington until 11 p.m. ET, and Hawaii's polls don't close until midnight on the East Coast.

As NPR's Domenico Montanaro noted, The Associated Press didn't call the 2016 presidential race until 2:30 a.m. ET the day after Election Day, and at that time, Trump was still leading in the popular vote. Hillary Clinton went on to win the popular vote by about 3 million.

Another factor to consider in the counting calculus is the surge in early voting.

Americans are breaking early-voting records, with more than 93 million votes already cast. Of that, 59 million mail-in ballots have been returned, with 32 million ballots still waiting to be mailed back, according to the U.S. Elections Project.

Election experts predicted that there would be a large increase in mail-in ballots this cycle because of concerns over the coronavirus pandemic. The increase in these absentee ballots may mean the count will take longer, particularly because election workers typically need to process each ballot by hand.

While some states, including Florida and Arizona, are able to begin processing mail-in ballots well ahead of Nov. 3, many states don't allow for that, which results in a slowing of the vote count.

Pennsylvania Secretary of State Kathy Boockvar told NBC's Meet the Press that she anticipates the count will go well beyond Tuesday.

"I expect that the overwhelming majority of ballots in Pennsylvania, that's mail-in and absentee ballots, as well as in-person ballots, will be counted within a matter of days," Boockvar said.

"The counties are staffing up, have a ton of equipment, best practices in place, and are planning, for the most part, to count 24/7 until it's done."